The year of an Anglo-American apology to Armenians and Turks 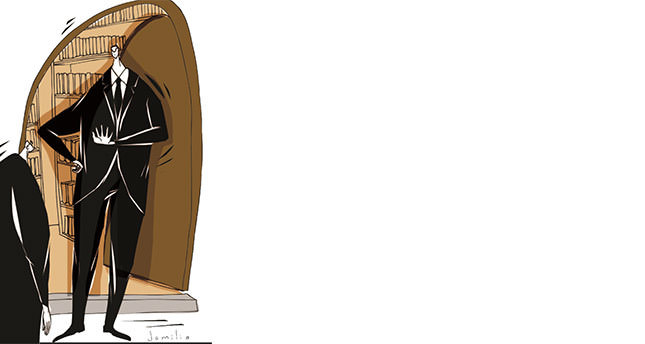 The study of genocide in Western academia is at its core a form of American soft power that has introduced a dominant language on genocide. This language has been disseminated internationally through top-down organization and is controlled according to American interests.

Going by the "Armenian" narrative that this American enterprise has produced systematically since the 1970s, one might expect the year 2015 to prescribe a whole lot of begging by Armenian and Turkish lobbyists before American politicians in Washington to make or not make this or that statement about their shared past.

However, going by two sets of inquiries, one might conclude with confidence that this year ought to be the year of an Anglo-American apology to both Armenians and Turks. If a significant breakthrough is to be achieved this year concerning 1915, an apology from the U.K. and U.S. might be it.

One inquiry is the exploration of what happened, which is based on a historical focus on how 1870s' British imperial politics - through moral pretense and racism - began to ruin relations between Armenians and their Ottoman sovereign, and set a newly created Armenian political entity on a fatal collision course with the increasingly vilified Ottoman state.

Another inquiry is the investigation of what is happening, which is based on an awareness of American political power in the international scene and how it translates through scholarly pretense and prejudice into an overpowering discourse on history and genocide that serves a modern-day imperial agenda. To understand 1915 in 2015 is to understand both the history of politics and the politics of history.

The first inquiry points at it being high time for an apology from London. In the midst of the Bulgarian Agitation in 1876, Britain's James Bryce selected the native Armenians as his pawns of choice, mindful of "the services which they may one day render." Before that, Armenians were for centuries peaceful and unarmed people. Following that, and certainly by 1915, the Armenian leadership was prepped for a political function in the form of repeated claims for statehood and threats of rebellion. As indicated by the existing documentation of his correspondence and writings throughout these years, Bryce helped establish this Armenian leadership, inspire it with nationalism, unfold its narrative and facilitate its organization. The Armenian people were tagged by Bryce to play a role in the destruction of the Ottoman Empire, to claim Ottoman land in eastern Anatolia as the Bulgarians did in southeastern Europe even though the Armenian population was not the majority in any of the provinces there.

In the 1870s and 1890s the political potential of Armenians was a partisan project in Britain that propelled Bryce's career as a Liberal politician and provided pretext for foreign policy polemics with Conservatives. By 1915, after brewing anti-Turkish sentiment for decades and with prestigious government positions in his resume such as president of the Board of Trade and the ambassador to the U.S., Bryce utilized his strong ties in the U.S. to build a machinery of anti-Turkish propaganda on behalf of the British Foreign Office in a wartime effort that identified Armenian suffering as its fuel. This machine is still the source of lies about Turks and an instrument through which Armenians are mobilized.

In the U.K., where there is a convenient post-9/11 state of mind, there is a rejection of post-colonialist realities. The British government acts in denial of the kingdom's current social make up and prefers to avoid a needed recognition and cleanup of a racist historiography that is offensive to the heritage of many of its citizens. The anti-Muslim literature of the anti-Ottoman campaign, which has yet to be officially discredited, is only one example of how the British government is failing to acknowledge its past and adjust its national identity.

Just recently, The Economist published a book review in which the events of 1915 are described several times as genocide in a matter-of-fact way. The Economist would rather do this and deflect British responsibility and it does not engage in introspection regarding this matter. It would rather continue to laud its "most famous" editor, Walter Bagehot, than consider how British Liberal perspectives and actions in the 1870s are connected to the sponsoring of the so-called superior Armenians, or to the racist ideology of Nazi Germany. Bagehot was part of the same intellectual-political circle as Bryce, and in his 1873 book about assigning natural selection and inheritance according to imperial desires, "Physics and Politics; or, Thoughts on the Application of the Principles of 'Natural Selection' and 'Inheritance' to Political Society," he said: "Already the brain of the civilized man is larger by nearly thirty percent than the brain of the savage." Yet, on the website of The Economist, the staff describes Bagehot as probably the weekly newspaper's all-time "greatest editor in terms of intellect," without regard to the imperialist underpinnings of his pseudoscientific intellectuality.

The second inquiry is bound to show that an apology from Washington is warranted. The term "genocide" came from there during World War II to achieve American goals for post-war Germany. The momentum for the term genocide was an indicator of the powerful uniqueness of the Holocaust as well as a testament of U.S. power in international politics. Despite it being an American idea, the Genocide Convention was not ratified in the U.S. due to concerns about the colonialist history of Native American decimation and African enslavement. But later, U.S. aggression in the Vietnam War introduced new ways in which the term genocide began to damage the reputation of the U.S. Jean-Paul Sartre and other intellectuals publicly accused the U.S. of genocide in Southeast Asia and associated manifestations of genocide with colonialism. It then became urgent and profitable for the U.S. government to establish control of how the term is used. One particular method of controlling the language on genocide was to create a diversion in the form of an alternative focal point.

Therefore, the reaction to the U.S. campaign in Vietnam provides the context in which the genocide accusation against Turks began to emerge in the U.S. Armenian-American scholars who did not previously speak of genocide suddenly had an incentive to do so and were invited to publish in academic publications on this matter. This, in turn, set Armenian territorial claims ablaze once again in the 1970s, and the Armenian Secret Army for the Liberation of Armenia was motivated by political rhetoric in the U.S. and inspired by the violence of the Lebanese Civil War to carry out organized terror attacks against Turkish diplomats and passersby.

In 1979, the U.S. government signaled a shift on the Armenian narrative from niche to mainstream through the President's Commission on the Holocaust, which, among other things, sought to cultivate a controlled language of genocide under the auspices of the international consensus on the Holocaust. The major boost in its investment in the Holocaust allowed the U.S. government to reclaim ownership of the term genocide from behind the scenes. The new narrative focus on Raphael Lemkin was designed to dissociate the genocide story from the U.S. government and lend it a moral spin. Policy decisions that ran through this commission later evolved into the planting of centers and institutes for "Holocaust and Genocide" around the world under which scholars such as Uğur Ümit Üngör in the Netherlands, Colin Tatz in Australia and Israel Charny in Israel have operated to present the Armenian case as genocide and create a buzz about Turkish denialism.

Samantha Power's 2002 "A Problem from Hell: America and the Age of Genocide" was the crowning moment in the mastery of "genocide" in the U.S. With even more fanfare than Kuper's similarly purposed book, she not only obliterates the history of American genocidal activity, but criticizes the U.S. government for not intervening enough internationally in the name of genocide prevention. Surely, this "critique" serves the U.S. government well. She does this at the expense of Armenian and Turkish history. While unable and possibly unwilling to cite a single Ottoman source, Power cites the NYT time and time again. Regarding the newspaper's reliability on the Ottoman-Armenian conflict, she does not even come close to disclose that Bryce had a correspondence with at least four editors of the NYT, namely John H. Finley, Charles H. Grasty, Charles R. Miller, and Rollo Ogden. This of course did not stop her book from being on the NYT bestseller list. It would be naive to ask how she could draw such damning conclusions about Turkish culpability without conducting a fair and thorough examination of her dubious sources and it is important to research what drove her to do so.

A recent article written by Thomas de Waal for the Council on Foreign Relations' (CFR) publication, Foreign Affairs, shows that the U.S. is not yet ready to back down from its abuse of Armenian and Turkish history. The U.S. is not through with pretending that its politicians are passively facing Armenian sentiment and Turkish denial. This article reflects this better than most. Not only is the CFR currently run by a former State Department director of policy planning in foreign affairs, Richard Haass, but its very origin is owed to the marriage between Andrew Carnegie's wealth and Elihu Root's U.S. government knowhow. Both Carnegie and Root were Bryce's closest allies in the maneuverings of international politics. The author of the article, de Waal, is employed by the Carnegie Endowment for International Peace (CEIC). To break through the controlled language on genocide, one must research the Carnegie network - Bryce, Henry Morgenthau and Woodrow Wilson, to name a few, were members of Carnegie's various boards of trustees. Lemkin's 1944 book, "Axis Rule in Occupied Europe," was published by the CEIC and Power, currently the U.S. ambassador to the United Nations, was mentored at the CEIC by Morton Abramowitz, formerly the U.S. ambassador to Turkey and assistant secretary of state for intelligence and research. Whoever is employed by the CEIC to write on the Ottoman-Armenian conflict and genocide is likely part of the political game and not an impartial observer.

It is difficult to ask those who are holding the loudest megaphones to put them down and apologize for the deceptive story that they have been telling. Why would they feel pressured by muted voices that cannot compete with their volume?

Nonetheless, apologies are owed by many in the Anglo-American community of power to many Armenians and Turks - apologies for using Armenian lives as pawns a century ago, and for using Armenian identity and emotions to serve as bargaining chips in international politics to this day, apologies for using racism and feigned morality to justify anti-Turkish policies a century ago and for using old propaganda to depict Turks as callous descendants of the perpetrators of genocide to this day.