I am not a terrorist Mr Murdoch, I am Ahmed the dead cop 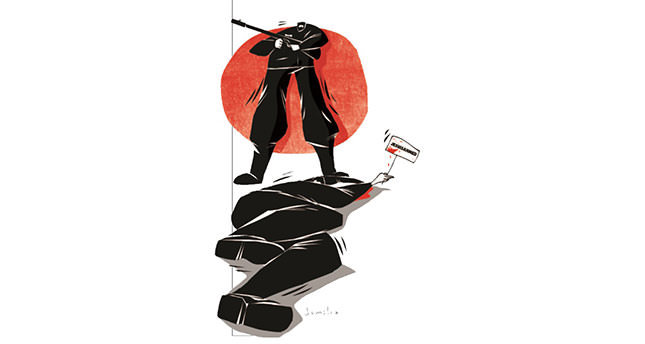 by Pınar Kandemir Jan 17, 2015 12:00 am
Since I have seen several character assassinations over the last couple of days due to misunderstandings or ill-willed manipulations, I will take my guard first. Hey, I am a Muslim, yes, I am, but not a terrorist. I condemn the massacre in Paris. I condemn any attack on civilians no matter who it comes from and for what motivation. But am I allowed to confess that I am not Charlie, as one Twitter user put it: "I am Ahmed the dead cop. Charlie ridiculed my faith and culture and I died defending his right to do so." Je suis Ahmed!

If I managed to convince you enough that I am all clean and if I don't need to apologize on behalf of the Kouachi brothers as Rupert Murdoch wants me to do, now we can talk about the hypocrisy of the freedom of speech in the West a bit.

After the Paris attacks, Murdoch, the famous Media tycoon, but more well-known for the phone hacking scandal now, tweeted: "Maybe most Moslems peaceful, but until they recognize and destroy their growing jihadist cancer they must be held responsible."

When he was holding Muslims responsible for the massacre in Paris, he was clearly not alone in doing so.

From the very beginning of this discussion, the majority of the Western media outlets desperately started to look for "Muslims" who do not condemn the attack enough to increase their ratings. Thanks to the BBC, they even went to High Wycombe, "a town which has one of the largest Muslim populations in the U.K." to literally ask British Muslims if "they support the Paris attacks or not." Since every single Muslim was a "usual suspect" in their mind, the BBC reporter pushed to take a tiny word so she could prove what is expected. Any answer like, "No, I am not Charlie, but I do respect Charlie's freedom of speech," was met with the question: "Then, you say these victims were not innocent, do you support terrorists?" These interviews are referred to by many as Islamophobic to prove that all Muslims are terrorists since they said they want respect for their religion and culture from outsiders.

One of the members of this Islamaphobic team was Tommy Robinson, the former leader of the far-right English Defence League (EDL). Since Robinson has a notable record of offending and insulting Islam, it was his day to loudly express his hate. Referring to the interviews in High Wycombe, he tweeted: "Many Muslims in High Wycombe support blasphemy laws, they don't see the cartoonists as innocent." Translation: "Wake up Britain, they are all goddamn terrorists, let's get rid of them." Since Robinson is really consistent on his racism and Islamophobia, his tweets are full of examples of hate speech and did not surprise anyone, of course. But the problem was that he was not alone this time. Media tycoon Murdoch was there to encourage all to speak loud and not be afraid.

One day after his scandalous tweets, Murdoch backpedaled by tweeting: "Extraordinary scenes in Paris today, but do not forget the heroic sacrifice of Ahmed Merabet, Muslim police officer whose funeral was today." Nice try Murdoch. But why not an apology rather than hypocrisy? We know that you very well know what an apology is and why it is mandatory sometimes, at least just to be politically correct.

In June 2013, a cartoon was published in one of Murdoch's newspapers, London's Sunday Times. The cartoon depicted Israeli Prime Minister Benjamin Netanyahu paving a wall with blood red colored cement. There were Palestinian bodies trapped between the bricks. The artist of the cartoon was Gerald Scarfe, a highly reputable political satirist with several notable works such as illustrations of Pink Floyd's "The Wall" and the caricatures of the famous British TV series, "Yes Minister."

There were discussions of whether this cartoon was anti-Semitic or not was debated by several analysts. The majority of them agreed that there was nothing offensive about the cartoon for Jews and it was not anti-Semitic at all. Clearly, Scarfe's work was on Netanyahu's policies in the West Bank, but since anything negative on Israel is a no-go zone, criticizing its policies is not a part of "freedom of speech." Oh, don't worry, I am not being sensitive, we have already gotten used to it, haven't we?

Not surprisingly, Murdoch, the owner of the newspaper that published this cartoon apologized just after for the "grotesque, offensive" cartoon by saying: "Gerald Scarfe did not reflect the opinions of the Sunday Times." He apologized to the Jewish community for a cartoon that was not anti-Semitic, but did not apologize to the Muslim community. He is dodging the column to make us forget his own offensive statements against Islam and Muslims because some are more equal than others. If the Islamophobic self-claimed "expert" Steven Emerson is a "complete idiot" as David Cameron said, what is Murdoch then?