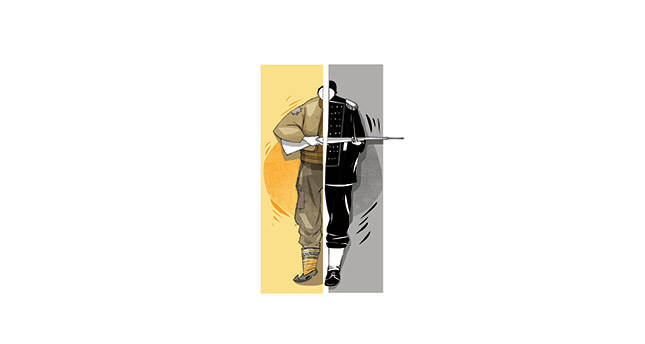 by M. Hakan Yavuz Jan 20, 2015 12:00 am
In the run up to the 100th anniversary of the Gallipoli campaign, President Recep Tayyip Erdoğan invited more than 100 world leaders, including Armenian President Serzh Sargsyan, to attend a special ceremony on April 23-24 commemorating the bloody battle. The Ottoman army was engaged on a number of fronts, yet the most crucial battle was fought in defense of Gallipoli, the gateway to Istanbul, against the naval forces of the Entente, which hoped to deal a quick knockout blow to the Ottoman Empire and use the Dardanelles straits to aid the faltering Russian government. Istanbul's young men sacrificed their lives in great numbers to win what is now remembered as the Ottoman army's most important victory in World War I.

The worst of the fighting in Gallipoli began with a major land invasion on April 25, 1915 after an amphibious naval attack on Ottoman artillery positions on April 24. During these first hectic days, the Ottomans prepared for the possibility of losing Istanbul altogether and began making plans to relocate the government, and the train in Haydarpaşa stood at the ready to whisk the Ottoman leadership, including the sultan, to Konya, and install the key government institutions there. For the Ottomans, it was the darkest hour of World War I and an existential moment for a Turkish presence in Istanbul. While Muslim men in Istanbul were mobilized to defend the capital city where the sultan-caliph resided, Armenian volunteers in eastern Anatolia were acting as guides for the Russian invasion of Ottoman territory and participating in the killing of its Muslim population. The city of Van was lost in early April to Russian-Armenian forces while the Ottoman army fought with limited resources to defend the homeland. Under these dire conditions the Ottoman military decided to remove Armenians from the warzone as well as from strategically important spots including Istanbul. The relocation of Armenians to the southern provinces of the Ottoman Empire resulted in the deaths of a significant number of Armenian civilians. Armenians suffered greatly during the long trek. Murders and massacres happened indeed, as unruly tribes, bandits and soldiers acting on their own initiative gorged on the chaos and opportunism of the war. In addition, the lack of food, medical means and the harsh roads also played an important role in this high rate of deaths suffered by many innocent people. Often forgotten alongside this heavily publicized and decontextualized aspect of the war is the fact that a large number of Muslim civilians were killed by Armenian volunteer units and their Russian allies.

Since mid-1965, Armenians have been commemorating these tragic events on April 24 in a manner that tends to forge a victim identity and pit Armenian communities against Turkey by demanding the events of 1915 be recognized as genocide and asking several Turkish provinces to be included in the Republic of Armenia. This year being the centenary commemoration of 1915, President Sargsyan established a committee to coordinate anti-Turkish activities and lobbying efforts to make historians out of politicians and brand the tragic events of 1915 as genocide. The Turkish state and public have vehemently rejected the term, sometimes without recognizing the suffering that the forced population transfer caused, but also in part because the events of 1915 consisted of mutual killing and mutual suffering more akin to a civil war, which should not be ignored.

President Sargsyan issued a letter in response to Erdoğan's invitation that was translated and distributed to the worldwide media. It is very important to examine the content and the logic of the letter because this letter is a clear demonstration of how history has been construed in the minds of Armenian political and academic entrepreneurs. History has essentially morphed into a fairytale narrative where any and all claims of Armenian victimhood are accepted blindly. President Sargsyan begins his letter by pointing out: "World War I is one of the darkest pages of human history, which resulted in the loss of millions of innocent lives and the mutilation of destinies." Indeed, the war was a tragedy of epic proportions for all Ottoman peoples, not just Armenians. It not only resulted in the deaths and displacement of Anatolia's Armenians, but resulted in the destruction of the Ottoman state and the killing of 4 million Muslims and the occupation of the empire, which subsequently ended with the great Muslim-Greek population exchange. The Turks were in constant war for an entire decade until Mustafa Kemal Atatürk liberated the current territories of Turkey and saved Anatolia as a country for Muslims.

The most problematic aspect of Sargsyan's letter is found in the next paragraph in which he attempts to utilize the hackneyed fable of Captain Torossian. He claims: "An Armenian artilleryman, Captain Sarkis Torossian, was one of the conscripts of the Ottoman forces at the Battle of Gallipoli. He was an officer who devoted himself to the defense and security of the Empire, and for his faithful service and heroic deeds received military awards on behalf of the Ottoman Empire. Whereas the wave of mass atrocities and forced deportations, planned and implemented by the Ottoman Empire against the Armenian people also led to the death of Sarkis Torossian. Among those 1.5 million Armenians slaughtered in the Genocide were his parents, who were brutally killed and his sister died in the deserts of Syrian. "

If we go by what President Sargsyan says, then Torossian was killed in the massacres against Armenians in 1915. But is that really so? Then how could he have arrived in the U.S., published his memoirs in Massachusetts under the title of "From Dardanelles to Palestine: A true story of five battle fronts of Turkey and her allies and a harem romance" in 1947, died, and been buried in Pennsylvania in 1954? It seems that for the sake of labeling the events of 1915 a certain way, the President Sargsyan's imagination knows no bound. Or rather, no scrutiny is required when any claim of victimhood fits a national narrative of suffering.

The story that Captain Torossian recounted in his memoirs is larger than life: He claims to have been a decorated Ottoman captain who fought on the Gallipoli front and even sank a British battleship. Torossian claims that Enver Pasha, the minister of war, awarded him with the Ottoman State Medal of War and introduced him to high ranking German officers such as Freiherr von der Goltz and Liman von Sanders. Upon discovering that most of his family members were killed, he switched sides and joined the Entente powers against the Ottoman Empire, avenging the deaths of his family members by defeating the Ottomans on behalf of the Entente in Damascus. For his bravery fighting the Ottoman troops, Torossian claims that the British bestowed upon him many medals.

In 2012, a Turkish translation of Torossian's book came out with a long introduction by Turkish sociologist, Ayhan Aktar. Another Ottoman historian, Burhan Sayılır, examined it in terms of dates, places, names and events, and claimed that the book is, in fact, not authentic. A group of respected Turkish historians who have been critical of the Turkish official historiography such as Halil Berktay, Hakan Erdem and Edhem Eldem discredited the authenticity of the Torossian story. After a detailed study of the events and the list of names in the military archives who fought for the Ottoman army, they concluded that Torossian's story was made up. In response to this criticism, Taner Akçam, who has an endowed chair at Clark University to defend the events of 1915 as genocide, wrote several op-eds to throw his weight behind the authenticity of the story. Akçam interviewed Torossian's granddaughter, Luise Shreiber, and then published an Ottoman certificate of decoration for Captain Torossian. Eldem, a leading authority on late Ottoman history, carefully studied these documents and concluded that they could not be authentic Ottoman documents. Moreover, Erdem carefully researched Torossian's narrative and wrote a 382-page study of the book, titled "Gercek ile Kurmaca Arasında Torosyan'ın Acayip Hikayesi" (Torossian's Curious Story Between Reality and Fiction) Moreover, the Turkish military archives also issued a statement and informed the public that there was no Captain Sarkis Torossian and no medal was given to such a person. Although Akçam and Aktar worked hard to authenticate the fiction by searching for Torossian's medals from the British army in London archives, they have so far found no glass slipper to make this fairytale true.

I would agree with the concluding paragraph of President Sargsyan's letter that, "It is the duty of each of us to deliver the real and undistorted history to the next generations, thus preventing the repetition of massacres and building grounds for rapprochement and future cooperation among nations, especially those that are neighbors." Indeed, we must all insist on the real and truthful stories to avoid dehumanizing each other and to build bridges between the two states. The period was painful for all and it serves no good purpose to distill the narrative to a formulaic one of victim-perpetrator. Unfortunately, the politicization and fabrication of the past events and documents do not help, but rather undermine, the attempt to mourn the pains of both sides. Torossian's story is an example of what has gone terribly wrong in the debate on Ottoman-Armenian history. Even in the face of solid academic findings that discredit the historicity of Torosyan's story, the Armenian concocted history reinforces itself through Armenian political needs. As the saying goes, necessity is the mother of invention.