How did they murder a country? 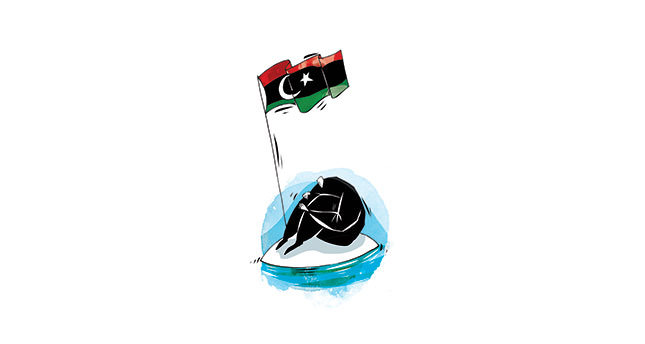 by Kayahan Uygur Jan 26, 2015 12:00 am
In 2011 the West intervened in Libya, spouting a multitude of promises and supposed good intentions. For those who still believe this type of speech, repeated in Afghanistan, Iraq and today in Syria, we would strongly advise you to take a look at the breakdown of this crumbling country. Libya practically no longer exists. Fighting on one side in Western Libya, one finds Gen. Haftar's forces, supported by elements of the old regime and the region's militia. To the East, we find an opposing assembly of Islamic groups and jihadis, supported by the Eastern militia. They fight one another using heavy weaponry in towns, and, more predominantly, in the two main airports, Tripoli and Benghazi, now rendered useless due to the gunfire. Economic life is at a standstill.

Abduction, murder, organized crime, political vendettas - and all of this without even considering artillery bombardment. Libyans live in total insecurity. Following the fall of Gadhafi's dictatorship, militia, tribal forces and foreigners "reign" over this warped notion of a state. Libya has never really been an entirely united state. The coastal strip (Cyrenaica to the East, Tripolitania to the West) existed over the centuries as a series of individual regions that were removed from the Ottoman Empire in its decline. Neither the horrendous political system of colonial Italy, nor the reign of the English-loving King Idris, which ensued, would contribute to the development of these isolated zones of the country.

The 1969 Libyan revolution by Gadhafi gave rise to a radical process of modernization. As a result of the nationalization of foreign oil companies and the explosion of oil prices in the 1970s, Libya became wealthy. This wealth did not pour straight into the pockets of the corrupt elite, as one might expect, but rather served mainly to build both a modern infrastructure and an exemplary welfare state in an African context. Given that there was nothing that even vaguely resembled a national bourgeoisie in place to bring about this process, the modernization of the economy fell to the bureaucrats.

However, it wasn't easy for Libya to override the tribal structure in order to sustainably modernize society. The Libyan state remained a hugely unstable political construction, and Gadhafi was forced to constantly seek a balance between the differing interests found in different tribes and regions. It wasn't even possible to create one united political party, symbolizing a national identity; instead a series of "popular committees" were imposed. In addition, Gadhafi's reign was marked by a series of political and military coups, tribal revolts and various other plots that "revolutionary committees" and the secret services attempted to destroy using increasingly repressive and brutal methods.

Equally, from an economic point of view Libya remained hugely unstable and dependent upon Western Europe for its oil exports, and even if agricultural and industrial projects were made possible due to the billions in revenue made through the oil industry, they would only be functioning through state-funded subsidies and even then most likely at a loss. This was not an issue while oil revenues were flowing steadily. However, as a direct result of the collapse in oil prices during the 1990s, the country fell into a deep financial crisis.

Around 2001, Gadhafi launched a phase of cooperation with the West by turning his back on his so-called "socialism." A neo-liberal restructuring of the Libyan economy ensued, which saw the state privatize national enterprises and push towards the private sector or in many cases even the redundancy of hundreds of thousands of employees. The Libyan economy saw an influx of billions in revenue, and its capital, Tripoli, became a major central point of interest for Western capitals, thirsty for lucrative investments.

This political and economic gap served only to further accentuate the structural problems of the country. This deluge of investments generated practically no employment for Libyans. Youth unemployment skyrocketed to a shocking 40-50 percent. There wasn't the least hope or prospect for an entire generation. And what finally exasperated this discontented youth once-and-for-all was to see the rich elite maximizing their fortunes to the detriment and cost of the state. While some elements of the state showed themselves to be resolutely set on the pro-Western course, others, quite conversely, made every attempt at a counter-attack against the announced dismantling of the state. Thus the contradictory politics of the country in recent years is explained.

When the wave of protesting youth began, the police and secret service responded in the usual fashion. The discontented Cyrenaic tribes of the regime seized the opportunity to launch an armed revolt against the central power. A number of regime officials also rallied to this rebellion, clearly seizing the opportunity to eliminate some of their state rivals and, in the process, hastily finalized the complete privatization of the economy. In no way was there a "democratic awakening," as we claimed in the West, as evidently the vast majority of the protagonists were anything but "democrats."

The first civil war ended with the death of Gadhafi and claimed the lives of tens of thousands of people along with him; undoubtedly, we will never be sure of the true figure. But, the second civil war, which started shortly after the end of the first, will last for many more long hard years yet to come. The infrastructure that was built lies in ruins, beginning with the facilities constructed for the extraction and exportation of oil, which have suffered extensive damage. The country is in the process of total disintegration and is losing all that was once considered human. Ultimately, it will become nothing more than a no-man's land.

One can be certain that as a direct result of the intervention in Libya by the United States of America, France and Great Britain, the rebels were able to win over Gadhafi. This intervening was undoubtedly an act sugared with clever rhetoric, but was extremely well thought out and prepared. Its result is clear and without discussion. The West murdered a country.