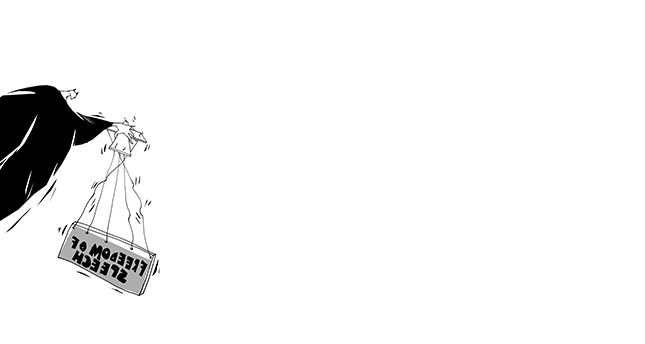 The Charlie Hebdo massacre sparked a series of protests and attracted enormous attention throughout Europe. In the aftermath of the shooting the West manipulated the discussions regarding the issue, but this could not conceal the inconsistencies in the Western notion of freedom of speech

Franz Fanon observed that in Europe, they are constantly talking about the Rights of Man, "but yet they murder men everywhere they find them, at the corner of every one of their own streets, in all corners of the globe." This observation is often interpreted as being an indictment of the hypocrisy shown by European colonizers. However, I would suggest that what Fanon is pointing at is not the systematic hypocrisy at heart of the European colonial enterprise, but rather Eurocentrism. Any observer witnessing the aftermath of the events of Jan. 7 would come to the conclusion that not much has changed. There was a dreary predictability to the way in which the killing of the managers and cartoonists of Charlie Hebdo was framed. Even for the most jaded observer, it is an extraordinary spectacle to behold - the violent death of 17 people in the streets of Paris and its environs becomes part of the epic narrative in the defense of freedom of expressions.

It is understandable that Muslims actually living in France, threatened by the mainstreaming of Islamophobia, endangered by the rise of the xenophobic National Front and harassed by law enforcement agencies have been under great pressure to validate this narrative and declare, "nous sommes Charlie." Muslims outside France, however, have also felt the demand to sign up to the "je suis Charlie" script. In this script, the murdered cartoonists become martyrs to satire. In this particular case it is the value of free speech that is at stake. Free speech is a signifier for freedom, and freedom signifies contemporary Western civilization, so along this chain of signifiers the narrative unfolds. This narrative is characterized by four main features:

2. Having established that Islamists oppose freedom, the question arises: why do Islamist-jihadist-Muslim fanatics hate freedom? Writers and commentators are all asked to provide answers. This question helps organize the public conversation into a series of answers that can be the subject of pontification and promised state intervention. There is no space to argue that the question may be wrong, so the answers reeled off focus on a range of factors from the violence of Islam, and/or the Quran to the libidinal economy of the armed militants and the failure of multiculturalism.

3. The constant repetition of the incessant refrain that the latest act of violence on Western soil was entirely an attack on freedom, and that Islamist-inspired fanatics hate freedom, leads to the demand for every Muslim and/or their religious leaders to speak out against this outrage. To answer questions like: why don't Muslims reject this violence, why don't they do enough to combat this violence? Muslims on public platforms are asked, sometimes politely, sometimes not, to denounce the latest outrage in no uncertain terms.

4. Having concluded that Muslims are not vehement in their denouncement - or simply practicing "kitman" or "taqiyya" when they do vehemently denounce it - a call goes out that something must be done to drag Islam out of the Middle Ages to embrace modernity. In this particular case, modernity is represented by satire. So Muslims need to learn to laugh - perhaps Western governments will institute a program of laughter lessons for Muslims. The search for a Muslim Martin Luther is renewed and counter-radicalization programs are initiated. In defense of freedom, more restrictions are placed on Muslims, eventually of course, these restrictions involve everyone. In the name of freedom and democracy, the actual space for debate shrinks and the "enhanced interrogation" chambers are readied. The defense of freedom and democracy, it is argued, does not require its practice.

These four tropes frame the self-contained and repetitive public conversations. This repertoire has now been in play for more than a quarter of a century, and while the specific cast of characters may change a little, the thrust of the narrative hardly shifts at all. This narrative is comforting, as it validates Western societies that the bloodshed they witness on their streets is due to the virtues of their values and not the violence of their vices, let alone the policies of their rulers. Of course, one can understand that after a traumatic event, there may be a need for a soothing story, a comforting tale that seems to keep the terrors of the changing world under control. While it may be understandable why conversations of consolation have taken hold immediately after the events of Jan. 7, it may be worth asking whether it is the best way to understand why these events keep on happening.

Another kind of conversation, however, is not only possible, but necessary if we are to avoid being locked in this cycle forever. Instead of a narrative of consolation that demands public affirmation of Western virtues, we need a therapeutic conversation, one that helps to understand, and accepts that understanding is not just comforting for the short term, but the only way forward in the long term.

This is why framing the attacks on Charles Hebdo in terms of freedom of expression is unhelpful. It is easier to argue that what is being defended is the right to express oneself rather than looking at the way in which this narrative helps to keep the current hierarchies of power and privilege intact. After all, comedy is a better principle to stand on than racism or imperialism or neo-liberalism. The trouble is that humor is not without context. Colonialism also had its comedians, racism also has its comedians, anti-Semitism also had its comedians. For example French stand-up comedian, Dieudonne Mbala Mbala who incidentally was banned and has subsequently been arrested for expressing his views that were considered to be advocating terrorism, which was just one of the many ironies arising from these events. Nazis made jokes at the expense of Jews and Gypsies and other racial minorities. Charlie Hebdo's publication of cartoons of the Prophet Muhammad complete with hook nose bulging eyes - the normal tropes of Western racist pictorial descriptions - is very much part of this venerable tradition, despite what the "je suis Charlie" campaign seems to believe.

Any framing of the events of Jan. 7 2015 in terms of the defense of freedom of speech can only be based on an erasure of the context of comedy. No alternatives to such depictions are permitted. Either you speak "Westernese" or you say nothing at all. There is no puncturing of the bubble of self-validation, self-interest and conceit. There is a limit to the number of times one can point to the ironies and absurdities of the "je suis Charlie" discourse.

Charlie Hebdo was not attacked because the magazine broke some singular taboo against the prophet. Charlie Hebdo was attacked not because they blasphemed the prophet when they decided, in 2005, to publish the cartoons in France, where an estimated five million Muslims live, and are subject to everyday discrimination and violence. The weekly magazine became a target for reasons beyond this, and they point at the very core of French identity.

The people of the bubble would consider it inconvenient to think that the association of France with freedom of expression is not an absolute. Yet, it was only in 2002 that the French National Assembly passed legislation dictating that only positive stories about French colonialism should be taught. Once we accept there is no absolute freedom of expression, the only matter to decide is, where its limits should be drawn and how they should maintained. The drawing of these limits needs to reflect the changes in society that have occurred, and they have to be the products of an ongoing conversation of the nation.

No doubt, those who believe in Eurocentrism would reject any attempt to change the narrative and point out that this attack in Paris cannot simply and simplistically be understood as an attack on the freedom of expression in France, the West or anywhere else. No doubt they would find it troubling if someone was to point out that the myth of the West as an engine of emancipation and liberation has little purchase outside Europe. No doubt most Western societies would be shocked to see most non-Europeans' experience of "European-ness" as riddled with violence, violations and institutional and systemic hypocrisy. The bubble of Eurocentrism, however, cannot be popped by pointing to the holes in the narrative of Western exceptionalism. There is no addition to the lengthy list of infelicities, delusions and logical fallacies of Eurocentrism that could unravel this discourse. The significance of the events in Paris cannot be confined to the narrative and campaign symbolized by the signifiers of "je suis Charlie." These events have to be understood in their context not as the radicalization of disaffected Muslim youth through their involvement in the Syrian civil war, but rather as the radicalization of Muslims driven by the articulation of a version of France that is racist and exclusionist.

The axis of the world is changing, and an order of things that was centered on the West economically, culturally and epistemologically has been dislocated. The dislocation is producing a crisis throughout Western societies in which patterns of engagement with the world are no longer fixed as they had been and the capacity to reproduce a version of common sense is seriously compromised. As a consequence, cultural comportments have been unsettled. In this period of dislocation, the legitimacy of white privilege and Western exceptionalism are being challenged, and thus this challenge is producing a social space dominated by expanding antagonism between those who want to restore White privilege and Western exceptionalism, and those who want to refuse such a restoration. These changes are manifest in various ways including a crisis of national identity in European countries. It poses questions about what "France" means, or what "the Netherlands" stand for, or what is "Britain." Anxieties about the continuity of Western exceptionalism are displaced onto the "Muslim question." The disciplining of Muslims becomes a means of extracting an answer to this Muslim question, but precisely because the question is linked to Europe's anxiety, it is impossible for Muslims to address, let alone answer.

This is the context of the Charlie Hebdo affair from its beginning, with the decision by a French magazine to publish cartoons of the prophet, as well as its long-standing reliance on racist and Islamophobic caricatures, to the bloody events of Jan. 7, and later to the extraordinary jump in its sales, from 60,000 per week to seven million, funded by France's national broadcasters, France Television and Radio France, and other media organizations such as left-leaning newspaper groups associated with newspapers like Le Monde and The Guardian "to ensure that Charlie Hebdo continues to live."