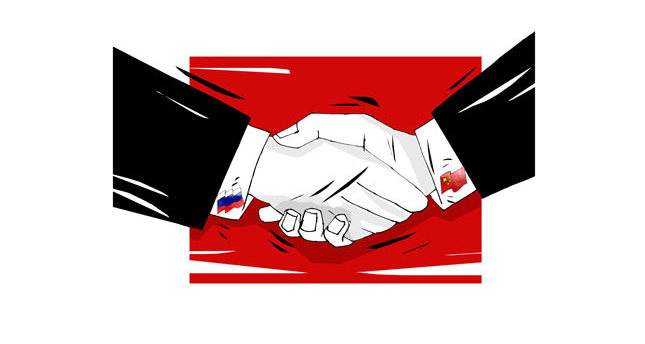 Ever since the crisis erupted in Ukraine, Russia continues to be under heavy pressure due to the economic and political sanctions imposed by the EU and U.S. Under these circumstances, Russia seeks to extend its partnership and cooperation with China in numerous fields

The Russian Federation and the People's Republic of China have recently increased the level of their cooperation and partnership at a time when a series of political, economic and security crises in Europe, Asia and Africa have been changing the nature of world politics. The respective countries have entered a new period of rapprochement with the advent of the new millennium, in which bilateral security cooperation, political dialogue and booming economic relations have come to the fore as a counterbalance to Western supremacy in world affairs.

Of course, the current nature of Russia-China relations can be said to have been shaped through a forced cooperation vis-a-vis the West, best understood with the proverb: "a friend in need is a friend indeed." This is due to the fact that Russia's move toward China cannot be separated from its latest standoff with the West, due to the annexation of Crimea and the ongoing crisis in Ukraine.

At a political level, Beijing has taken a neutral stance on the crisis in Ukraine by underlining diplomatic solutions to the issue, and Chinese authorities have condemned Western economic sanctions on Moscow. However, China has chosen to side with Russia at the U.N. Security Council meetings regarding the conflict in Syria and the Bashar Assad regime, together with Iran's hotly-debated nuclear negotiations.

After Western sanctions targeted Russia's energy, finance and security sectors, the Russian leadership decided to enhance commercial and economic ties with China. These soon-to-be-established commercial ties are also expected to move bilateral relations further toward a strategic partnership at a time when the Euro-Atlantic community continues its military and economic pressures on Moscow.

The fundamental common ground in the Russia-China partnership may be the profit-maximized economic relations from which both parties benefit within a win-win situation. Over the past several years, China has become a major commercial partner for Russia as the trade volume increased by 17 percent in 2013. Meanwhile, Russia is also among the top countries for Chinese foreign trade, with the trade volume reaching almost $90 billion at the end of the same year.

For Russia, China constitutes a stable market with its insatiable demand for energy resources. On the other hand, China gets cheaper energy supplies securely, while avoiding the hurdles of energy geopolitics which affect deals between Europe and Moscow. Hence, both Russia and China appear to be becoming increasingly interdependent.

With regards to this new direction, the Russian and Chinese presidents, Vladimir Putin and Xi Jinping, signed two mega gas deals in 2014, which makes China the biggest consumer of Russian gas, who will surpass Europe in 2018. On May 20, 2014, Putin visited Beijing in order to review the price of gas that Gazprom delivers to China, and sealed a bonanza contract on the construction of the proposed Siberian Pipeline. The aforementioned contract is valued at $400 billion, and pledged to pump 38 billion cubic meters (bcm) of gas per year to China. Additionally, the Kremlin's second pipeline en route to China, called the Altai or Western corridor, was proposed during the Asia-Pacific Economic Cooperation (APEC) summit in Beijing in November 2014, and is expected to carry an additional 30 bcm of gas annually.

Commencing of the EEU

In this context, Russia's enhanced ties with China, most notably in the economic sector, renders the newly-born Eurasian Economic Union (EEU) more significant in terms of a prospective geo-economic shift in the global economic system. First proposed by Kazakh President Nursultan Nazarbayev as a blueprint for the post-Soviet space in 1994 and, later becoming Putin's flagship in foreign policy, the long anticipated EEU was officially inaugurated on Jan. 1 2015.

Signed by the leaders of the ex-Soviet trio of Russia, Belarus and Kazakhstan in Astana, the Kazakh capital, on May 29, 2014, the EEU Treaty has allowed Moscow to succeed in the creation of a single-market community. With the formal participation of Armenia and Kyrgyzstan early in 2015, the EEU will bring almost 183 million people together within a regional market of $4.5 trillion gross domestic product. The E.U.-like EEU will function as a customs union and regulate financial, agricultural and industrial policies between its member states.

At first glance, the EEU does not appear formidable in terms of industrial size and attractiveness of its feeble, post-communist transition economies in comparison to the Eurozone or the North American Free Trade Agreement (NAFTA). However, Russia's flourishing economic partnership with China draws attention due to its promising future. In other words, a China-Russia economic partnership might facilitate the creation of a prospective center of gravity regarding the integration of regional economies in the newly-formed EEU.

Prospects for the EEU

In the wake of Western economic sanctions, declining oil prices and historic drop of its national currency, the ruble lost almost 45 percent of its value against the dollar and euro last year. As a result, the Russian economy has been in recession since the last quarter of 2014. Under these circumstances, China has appeared as an economic panacea, enabling Russia to take a breath when Western pressures have increased on its economy. Moreover, the parties have recently agreed on using the national currencies, the ruble and yuan, in their commercial exchange - another significant monetary move that will certainly accelerate the "de-dollarization" of Eurasian transactions by further integrating regional economies with Moscow and Beijing.

Therefore, one might say that the current financial-economic trends in Russia-China relations have the potential to reverse Western economic supremacy in the long run. In this sense, the EEU presents a challenge from within a region where the fastest growing economies in the world, such as China and India, together with sanctions-hit and long-isolated Iran, and even Turkey, are eager to cooperate with Russia, Central Asia and the Caucasus. That is to say, the newly-formed EEU could come to prominence given the fact that the region's countries have already been collaborating militarily and politically since the Shanghai Cooperation Organization (SCO) agreement was signed in 2001.

For the Central Asian republics, the new economic union with Russia seems attractive, as they aim to break their landlocked isolation in trade and access to Western markets. Kazakhstan, in this particular, has long been the champion of such a customs union with Russia, and Kyrgyzstan returned to favoring this path after Almazbek Atambayev won the presidency in 2011. Both Nazarbayev and Atambayev have expressed several times that they have no option other than to integrate economically with Moscow. But the respective leaders have also stressed that the EEU would only serve as an economic cooperation and must avoid the rhetoric of a political union with Russia.

If it is a success in terms of creating a free trade zone in Eurasia, it may be able to attract other countries in the region like Uzbekistan and Turkmenistan, which have limited options as well. Uzbekistan under Islom Karimov is expected to join in the near future, whereas Tajikistan is already negotiating conditions to enter the EEU. Russia has long been trying to convince Dushanbe to become a member of its bloc, but the Tajik president, Emomali Rahmonov, seems to prevaricate between Moscow and Beijing due to China's strengthening economic ties with the country.

Russian leadership under Putin and Prime Minister Dmitri Medvedev has long been striving to integrate Ukraine into such an economic union, but their endeavors failed when the Kremlin-backed former president of Ukraine, Viktor Yanukovych, was ousted in events surrounding the February EuroMaidan revolution in Kiev in 2014. From the 2008 August war in Georgia to the ongoing Ukrainian war, Russia alienated both countries in terms of geopolitically re-integrating them with the Commonwealth of Independent States. Rather, the Euro-Atlantic bloc, namely the E.U. and NATO, had a chance to expand their spheres of influence at the edge of "Russia's backyard," which will continue to escalate tensions in Russia against the West in a geopolitical-military impasse.

However, the comparative economic advantages of Russia and China, no doubt, will augment the regional economies' dependency on Moscow and Beijing. In this respect, Armenia and Belarus are said to have become more and more dependent on Russia. Last year, Armenia made the decision to affiliate with the Russia-led customs union by refusing to sign a partnership agreement with the E.U., preferring to join the EEU. Russia naturally used this advantage to maintain its grip on the country, but such a dependency has undermined Armenia's economic and political security in the regional complex of the South Caucasus. As for Belarus, the situation is the same as the country's management under President Aleksander Lukashenko, as it has long been a part of Russian economic and security projects on the edge of Europe. Minsk is the most vulnerable third party of the Western sanctions on Moscow, and expects the EEU to give a fresh start to the regional economies when Eurozone countries have entered a period of financial-economic turmoil.