The Armenian allegations of genocide and propaganda in the United States 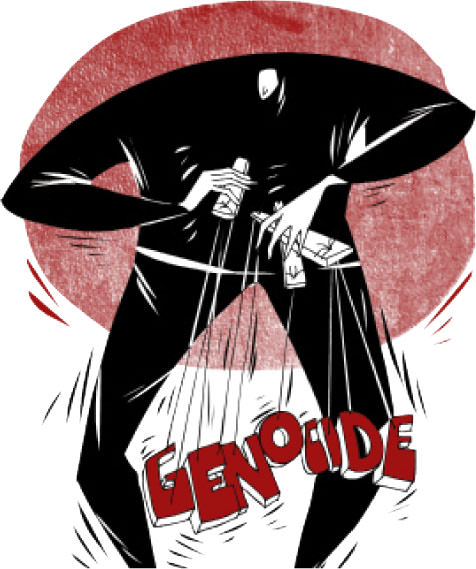 Turkey proposed to form a joint commission of scholars to study the 1915 events in detail to gain full perspective. But the Armenian government rejected this proposal. If Armenians were really looking for closure, why would they refuse this chance?

The international legal definition of genocide is the criminal intent to completely destroy a people based on their nationality, ethnicity, race or religion. This means the crime is premeditated or planned, so the death of a people is not, by definition, genocide. The term is not one to be taken lightly because it has very strong implications and creates a very ruthless image, and to accuse Turkey of this without facts is unjust. Genocide is the highest crime in human history and is one of the worst moral crimes a government can commit against its people. This concept only applies when there is an actualized intent. For years, many have blindly accepted the Armenian portrayal of the tragedies that occurred long ago, these accusations against Turkey regarding genocide are illogical. The events that took place in 1915 during WWI between Ottoman Armenians and Ottoman Turks resulted in the deaths of many people. It can be described as a civil war within a world war. This still remains a controversial dispute, to label the deaths during this time "genocide" is incorrect. Though there were killings, and many died, there was no deliberate intent to wipe out a specific ethnic group. Armenian allegations have turned many against Turkey due to its severity. These accusations jeopardize political relationships between Turkey and the United States since Turkey is a member of NATO and important ally to the U.S. because of its geopolitical location. The insistence of claiming this to be genocide creates tension and issues between countries. Everyone has the opportunity to tell their own story, freedom of speech is praised, however if someone chooses to contradict the Armenian allegations of genocide they are met with cynicism.

The story many have heard has implemented anti-Turkish views. If you search the Internet, newspapers or any media coverage of the Armenian genocide debate you will see that there are little to no stories defending the Turkish interpretation. The media refuses to publish the side that wants to defend itself. Most articles now on the Internet blatantly state that it was genocide, but this is not a proven fact and misinforms many readers. If the word genocide is used to describe the events, then it should be "alleged genocide," as in reality this is an allegation and should be stated from the beginning. When this is not given up front it continues to spread ignorance concerning actual events. Many of us fail to be informed on basic facts of this time. The relocation of Armenians came about because of the revolt some Armenians had begun against Ottoman Turks. There are over 50 documented cases of Turkish massacres at that time. The move was a safety measure the Ottomans had to put in place to prevent further losses at a time of war. Historical official documents show that the Ottoman government instructed soldiers to protect the people, they were to provide food and supplies during their march and specific warnings were placed that this was not an opportunity to seek revenge. The choice to remove them was planned to be humane. British and French Ottoman sources along with demographic studies have placed the Armenian population prior to the war at 1.5 million. Historian and demographer Professor Justin McCarthy of the University of Louisville has estimated Armenian deaths and losses at slightly less than 600,000. This number also follows the claims of British historian Arnold Toynbee and French missionary Monseigneur Stanislas Touchet, while Armenian sources have placed the pre-war population at larger than 1.5 million and then have claimed an exaggerated 1.5 to 2 million lives lost. It is also reported that more than 2.5 million Anatolian Muslims, Turks and Kurds perished - the years of the war was a horrible period of time for all of humanity. There were many casualties in this war who all suffered. This was not a plot it was in itself a terrible suffering for all people. Documents from around the time of 1912 to 1922 describe inter-communal violence, forced migration of all ethnic groups, disease and famine as causes of death. One of the main causes of death is said to be starvation, and if this is the case, Armenians were not alone in this. Food shortages were endemic at the time and everyone was affected by them. Many Ottoman soldiers themselves died of poor conditions like Armenian who had very little to eat or be clothed in. This is not to downplay the tragedy at all - all the deaths that occurred are absolutely real and deserve to be remembered.

The alleged critical evidence that was called upon has been considered to be a forgery by both Turkish historians and many Western scholars of Ottoman history. Evidence can only be reviewed correctly by historians, not politicians. If there is at all a reason of doubt that historians find then we must rely on the word of experts and not unreliable stories. Many have chosen sides in this debate, some Americans and other countries have relied on questionable "proof" that ultimately supports the Armenian side. One example is that of the Memoirs of Naim Bey published in 1920. This book contained 30 alleged telegrams that led many to believe that the Ottomans' attempts were to exterminate Armenians, however many historians believe this to be fabricated. Furthermore, the British were in Istanbul for four years after the war holding some hundred supposed Turkish war criminals for trial. After all the time they spent there and after examining all files of the Ottoman government they could find nothing to hold and try these men. Then out of nowhere documents, telegrams and "proof" that there was a motive of "wiping out" Armenians popped up several years later to incriminate people of genocide. The signatures on these documents turned out to be false, there were issues with the dating systems and in the archives no backup copies were found. This "evidence" brought no answers.

The Armenian side is hypocritical. Just as they suffered, many Turks did as well at their hands, and this side is never told. The media in the West and Armenia censor all of our history. The killings of Turks are just as real and never spoken about. The allegations do not take into account all the pain and agitation some had caused before the war and forced relocation. The story they tell is missing the terror that was brought, the revolts that were led against their government, the treason and terrorism. Some Armenians took part in violent acts against their fellow Ottoman population. From 1890 to 1915 armed revolts were staged, some joined invading armies and terrorized the population in hopes of getting the Turks to flee their own land. The one sided version told to people masks the truth of many that were lost at that time. In reality, the Turkish losses were four times as worse than the Armenians. They were not the only minorities in the Ottoman Empire, there were Jews, Greeks and Arabs, and the fact that they were singled out to be relocated shows there was a reason behind it and they were not as innocent as they have claimed. Do Turkish deaths and suffering not mean as much? It is insulting to only memorialize and show respect for Armenian deaths but none for all the other lives lost. The times following the tribulations proceeded without much trouble between the Turkish and Armenian people leading up to the 1960s. Bitter memories were exploited and added fuel to the fire. Grievances led to anger and violent anti-Turkey reactions exploded. To gain the attention of the world many sadly resorted to terrorist attacks. Over 30 Turkish diplomats and their families were brutally murdered in attacks since 1973 by Armenians in attempts to seek some sort of vengeance. Of the 2.5 million people lost during WWI, 523,000 of them were by Armenian terrorists. People have been blinded by propaganda and do not see the other victims.

Turkey recognizes that the events that occurred in 1915 were terrible occurrences and are of great concern, for this reason it offered to cooperate fully in attempts to move past and put this painful history to rest. Turkey proposed a joint commission of Turkish and Armenian scholars to study and go over the events in detail to fully gain every perspective. The commission would have had unhindered access to both Turkish and Armenian archives, they would have been able to look into every detail of the time. Turkey did as it promised and opened its archives in a genuine attempt to put matters to rest. The Armenian government rejected this proposal and would not open its archives. If they were really looking for closure, why would they refuse this chance? The vast majority of well-respected historians from all over who are experts on the Ottoman Empire and World War I do not agree on the description of these events as genocide. To no surprise of all the historians who do argue this as genocide, very few are not Armenian and actually possess expertise in the history of the region. There is an immense bias that sadly prevents the truth from actually being heard.

With the huge lack of documentation and order, the fact is that there is barely anything to rely on other than that there were lives lost, and this alone does not prove genocide. This is a matter for historians to debate, compassion is necessary, but in a case such as this, it creates problems because it is selective. There is always more than one side to a story. Many have heard the Armenian side and have already made up their minds, quick to place heavy allegations of darker motives the Ottomans had for the Armenians. What happened was far from what was originally planned. One can never fully understand the story if both sides are not heard. By accepting only the Armenian side it becomes prejudiced and damages the true understanding of these events. It was a tragedy for all of those involved, but it was not genocide, and condemning Turks in an effort to describe the experience ignores the truth. This tragedy has been used as a political tool against Turkey for years. This tactic is distasteful and does not honor the memories of all those who were lost or our world's real history.