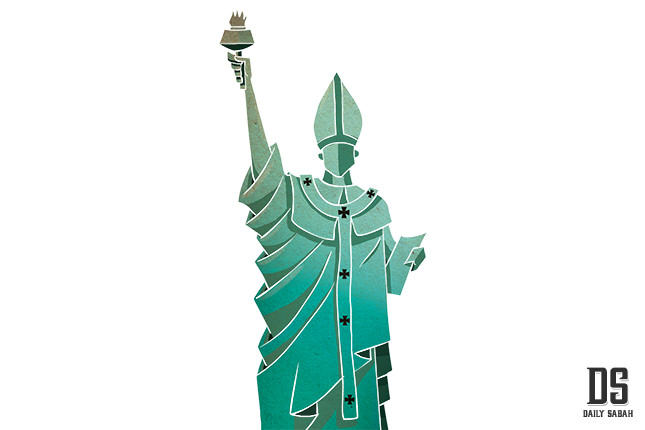 What lies behind the new close relation between the U.S. and the pope is unknown. However, the U.S. seems to have persuaded the pope to use his influence to legitimize its foreign interests

Pope Francis's politicization of Ottoman history last April was a staged event that the American-controlled Associated Press then carefully packaged and disseminated around the globe. It was also covered in similar fashion by media outlets such as Australia's ABC, the BBC, CNN and The Huffington Post. The wording of the news items was sure to associate Turkey with denial and to characterize the Turkish government as angry because the pope used the term genocide in reference to the Armenian relocations and deaths in World War I.

As one might have expected, many Turks did not appreciate the pope's push to further polarize this already contentious issue. One common reaction was to wonder whether the pope expressed an anti-Muslim sentiment by choosing to preach about a Muslim perpetration of massacres while decontextualizing what happened and ignoring many other cases of civilian suffering. Those who are aware of the long history of religious persecutions in Europe may have wondered how he could keep a straight face while diverting attention away from crimes, that throughout centuries, were directed at groups for not being Christian - crimes that he never has, and likely will never, describe as genocide.

However, upon reviewing Pope Francis's recent visit to the United States, there is good reason to believe that the current pope was not simply being insensitive to Turks because of a religious bias, but rather that he is being used as an instrument of U.S. influence. Through him, the greatest power on earth, the United States, is able to frame desired agendas and exert its influence without being seen as doing so.Who are the people whom the U.S. can reach through the pope? His influence on world public opinion is not limited to Catholics. Both Catholics and non-Catholics generally perceive the pope as an independent figure. Over 1 billion people can be persuaded by the words of the pope into thinking that certain convictions and preferences are their own as Catholics without ever suspecting that their views are being shaped by calculations of how they may best serve U.S. interests. In the eyes of billions of others - those around the world for whom Pope Francis is not necessarily a figure of moral authority - he still enjoys credibility as a non-American voice that represents a vast religion.

Despite the prevalent perceptions of the pope as a figure, American control of the Vatican is not unthinkable. Political realism teaches that the greatest state power among the nations will seek to compel or impel weaker states to act according to its wishes. Unlike the style of past colonialism in which imperial interests were met largely through the use of force and incentives in dealing with the masses, the neocolonialist practice of today heavily relies on the co-opting of a state's leadership. In this sense, the pope as the ruler of an independent city-state since 1929 is no different from the political leaders of certain small states in Africa, Asia and the Middle East who are seen as agents of U.S. interests. It bears having in mind that the last imperial troops to march through St. Peter's Basilica were the British in June 1944 on behalf of the U.S.-led Allied Powers in World War II.

Latin America is the theater in which Pope Francis has been most influential, and his capacity to influence there is paying dividends in Washington. While China, Iran and Russia are considered the main challengers of U.S. hegemony, there is a consensus among scholars that the successful emergence of the U.S. as the world hegemon that it is today was made possible by the preceding domination of its own region. Meaning, the maintenance of a favorable status quo of U.S. dominance on the American continent - a dominance of a kind that no other nation has in any region - is the bread and butter of what the U.S. has been able to gradually accomplish since the dawn of the 20th century. From this perspective, one might come to understand the significance of being able to utilize an Argentine pope who has a tremendous effect on the discourse and public mood in Latin America. Perhaps this might also explain the mystery that is the unprecedented resignation of Pope Benedict XVI, a German who would not have been able to fulfill vital public opinion tasks as effectively.

The idea behind Pope Francis's trip to the U.S. was especially ambitious as it sought to have the pope function as a discourse maker in the American public. Efforts were made to distract the public from the strings that pulled this pope throughout his tour of the east coast. Media platforms were established for Catholic American Republicans such as New Jersey Governor Chris Christie, Senator Marco Rubio and Representative Paul Gosar to publicize their political disagreements with the pope as if to declare that his opinions were not necessarily pro-American. Similarly, The New York Times published an editorial with the headline "Pope Francis' Challenge to America," as if the man just walked into the heart of the U.S. capital and spoke his mind freely. Such attempts aim at keeping the American public at least two mental steps away from considering that the pope is an American puppet. Credibility and effectiveness required that the pope would be portrayed as respected and appreciated, without leaving room for suspicion that he is being promoted by governmental design.

What Washington gained from the pope's visit did not necessitate that American public opinion would be in agreement with the pope about the issues that were raised in his speech in Congress. The gain is to be found in the ability to maintain a believable discourse through his words. Members of the public are free to hold opinion A, B or any opinion in the space between A and B, as long as the information is controlled in such a way that whatever opinions members of the public choose or feel like they are choosing for themselves, the discourse will stay within a predetermined set of options and create an anticipated balance.The theory that the pope played a part in a premeditated plan to structure discourse is one logical way to explain how a group of 36 religious leaders, including U.S. President Barack Obama's advisor, Jim Wallis, knew that the pope's speech in Congress would present an opening to generate momentum on climate change and reserved a full page in the following day's edition of The New York Times to support the message. The printing of the ad may have followed the speech, but the organization to place the ad seems to have preceded it. Through Pope Francis, Wallis was able to say that "the global public discussion" about the preservation of the environment as a common good was changing, but it remains possible that Wallis may have had more input on the speech than the pope did.

A free pope might not have entered Congress. In fact, a pope without American strings such as Pius X, in 1910, before World War I, refused to meet with American politicians such as then Vice President Charles W. Fairbanks and then President Theodore Roosevelt. Popes nowadays seem to have political duties imposed on them because they are subordinates of greater political powers.

What clues in the September visit might suggest that the "pope show" in the U.S. was an American production? The clues have to do with the distinct Americanisms in the pope's words. It cannot be taken for granted that the pope would choose to speak in English before any audience. The choice of English, regardless of the efforts in the American press to stress that it was the pope's own decision, suggests a commitment to affecting American public opinion rather than articulating spiritual guidance in a manner that is natural to the pope.

The biggest clue of the pope's service to the U.S. was given in his rendition of how Native Americans were treated by the U.S. federal government. To those who have been paying attention to how the U.S. controls the discourse on genocide, the pope's true colors of red, glowing white and blue were on full display when he talked about the abuse and near extinction of the native population: "Those first contacts were often turbulent and violent, but it is difficult to judge the past by the criteria of the present."

When compared to his statement about the Armenian losses in World War I, the disgraceful prejudice against Turks looms large. Pope Francis said: "Concealing or denying evil is like allowing a wound to keep bleeding without bandaging it," before asserting that the victimization of Armenians is considered to have been "the first genocide of the 20th century." This comparison does not merely point at a double standard, but at the pope's role as an agent of American discourse making.An independent pope might have sought to inquire into how over the course of several decades in the 19th century American missionaries in Anatolia managed to transfer power from the traditional leaders of the Armenian Apostolic Church to an educational system that institutionalized American control of Armenian priests, thereby transforming a previously Armenian form of Christianity into an American version of it. Thus, the Apostolic organization was eliminated and replaced by a new leadership of the Armenian Church that willfully cooperated with foreign powers and blindly followed American and British influence into transforming its own people from a peaceful ethnic minority in the Ottoman Empire to a fiery political group that was a disruptive force against the Ottoman state.

This pope, though, is not independent, and his leadership of a highly influential religious institution is the product of powerful maneuvering by the U.S. akin to what was done to the leadership of Ottoman Armenians. Institutions that have a foundational ability to mobilize populations through the definition of their identities are valued commodities for empires. They are coveted by the U.S. because they offer an opportunity to inspire loyal followers into action by controlling and sustaining a leadership that is credible on the surface but actually operated in accordance with foreign interests. In this, the pope follows a long line of others, who as figureheads have facilitated the continued exertion of U.S. influence.

The voice is that of the pope, but the hands are those of American power.

*Ph.D. candidate in Political Science at the University of Utah