Power transactions and stolen justice: The case of Israel 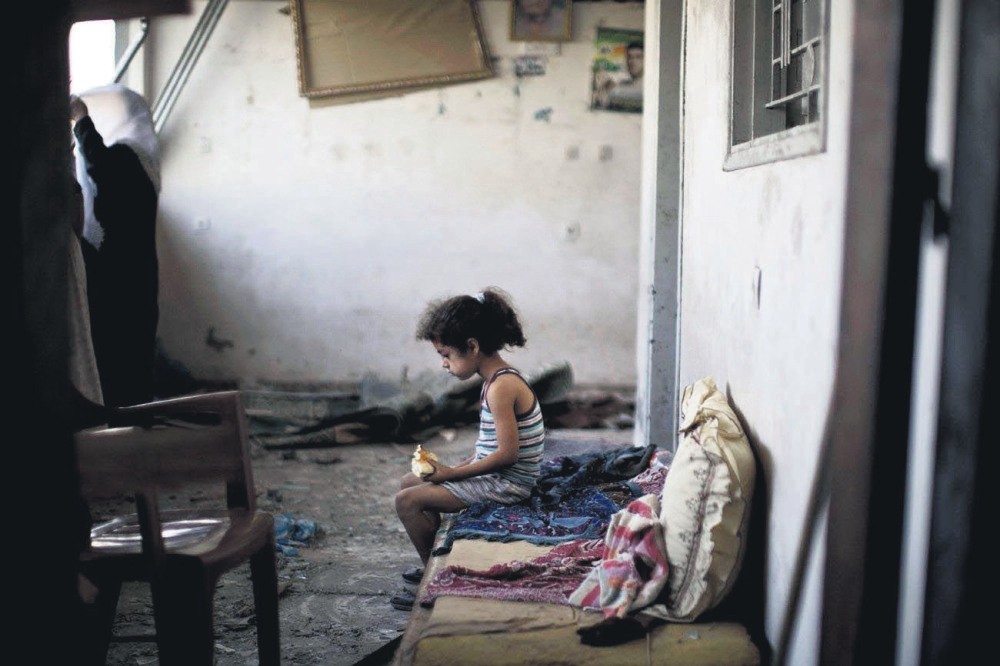 A Palestinian girl sits in the rubble of her destroyed home following an overnight Israeli airstrike on Gaza City, Aug. 2, 2014.
by Abdalrahman Migdad Feb 07, 2019 12:06 am

In today's world, justice does not matter when it comes to those that possess power. That makes sense if you accept that politics is a game of common interest. It also makes sense if you acknowledge political relationships in the form of transactions where benefit is the measure of success. A few years back one of my American professors told me that if the Palestinians had anything to offer the United States, the Palestinian situation would be different. I believe him because right and wrong does not matter, even human life doesn't matter, and if it did; it depends whose life it is, but in all cases that humanistic speech comes after the state of the "ruling regime" interest. In short, justice does not matter; the case of Israel proves that.

The Palestinian people, who have been living under Israeli colonization for many years, have suffered many injustices. The Israeli colonization is one based on racism and dehumanization for the Palestinians, and on top of that, gains regional and international support in the form of finance and political coverage. Many pieces of evidence could be used to showcase the controversy of Israel. For example, looking at data from the year 2018, we find that Israel was condemned by the U.N. General Assembly 21 times while the following countries were only condemned once: Iran, Syria, North Korea, Russia, Myanmar and the United States.

Nothing more than a condemnation

Those countries and Israel were condemned because they have committed criminal acts. Here, I am not planning to explain the reason for condemnation exactly, I will assume people have an idea about the tragedies in each of the countries. But before returning to the 21 condemnations of Israel that happened only in 2018, let's agree that some condemned countries are partially criminal, but Israel has major Issues with committing crimes.

It is like drug addiction, those with minor addictions can be cured, severe addiction proves to be very difficult to cure, but with the support of family and friends, along with the desire to be treated the impossible may be possible. The issue with Israel "ill Israel," is that it has no desire to be cured, and its friends support it in a negative way.

Additionally, there are more than 60 U.N. resolutions that condemn or demand Israel to stop an attack or to cooperate in certain occasions. The Israeli crimes are not limited to Palestine, some of those U.N. resolutions also concern Lebanon, Syria, Tunisia and Jordan. What the U.N. demands of Israel is to abide by international law and respect its neighboring countries. However, the friends of Israel support it in a negative, destructive way. One clear example is the American veto to all those U.N. resolutions.

Beyond the American veto, how does the world support Israeli injustice and Israeli crimes? If we research countries that support Israel in different ways, we find that most of the countries in the world support this "powerful and illegal occupation according to international law." The support takes many forms; political, direct military support, direct financial support, supporting Israel in the U.N., or by simply being involved in economic activities of this illegal occupation.

Israeli economic activities are large and diverse. First the U.S. – besides being the largest trading partner of Israel, the U.S. seeks to increase "aid" to Israel by $200 million in 2019 while at the same time deprive the United Nations Relief and Works Agency for Palestine Refugees (UNRWA) the financial support used in education and health. That American "aid" in real life means sending military equipment and machinery to Israel. Japan exports $1.3 billion worth of things to Israel that include military machinery and technology, and the relationship and partnerships are growing. Overall, Israel exports $61 billion and imports $66 billion according to 2016 estimates. Top export destinations of Israel are the U.S., Hong Kong, China, Belgium, Switzerland and Germany. Those countries support Israel against the Palestinian people because most probably returns from such economic activities will be used directly or indirectly to harm Palestinians – those harmful acts that the U.N. has been condemning for many years.

The privilege given to the IsraelI state

Other ways to help Israel is by normalizing relations. Common sense indicates that if I cannot punish a criminal, I would not make their life easy. Many of the countries that condemn Israel in the U.N. have economic and diplomatic relations with Israel whether directly or indirectly. For example, Israeli's can enter 147 countries and territories visa-free, or obtain a visa on arrival. Such travel facilities are a result of diplomatic relations. Clearly, that makes the Israeli passport one of the best in the world. That is called privilege. Thinking about the privileges of carrying a Palestinian passport gives you a perfect example of how the world stands with the more powerful, even if they are condemned by the U.N., against the oppressed.

An impartial observer would understand how today's world is a world of Trump, where everything is a transaction and whatever is best for business takes place. Of course, in this context, whatever is best for the more powerful takes place. This is not a humanistic text, but as an individual, if you don't want to support criminals, be mindful of your own transactions; who you buy from and who you sell to, who your friends are and what they do. If you are not mindful of your transactions you are supporting criminals like most people in the world. Supporting unknowingly is not as bad as deliberate support, but it is still bad.