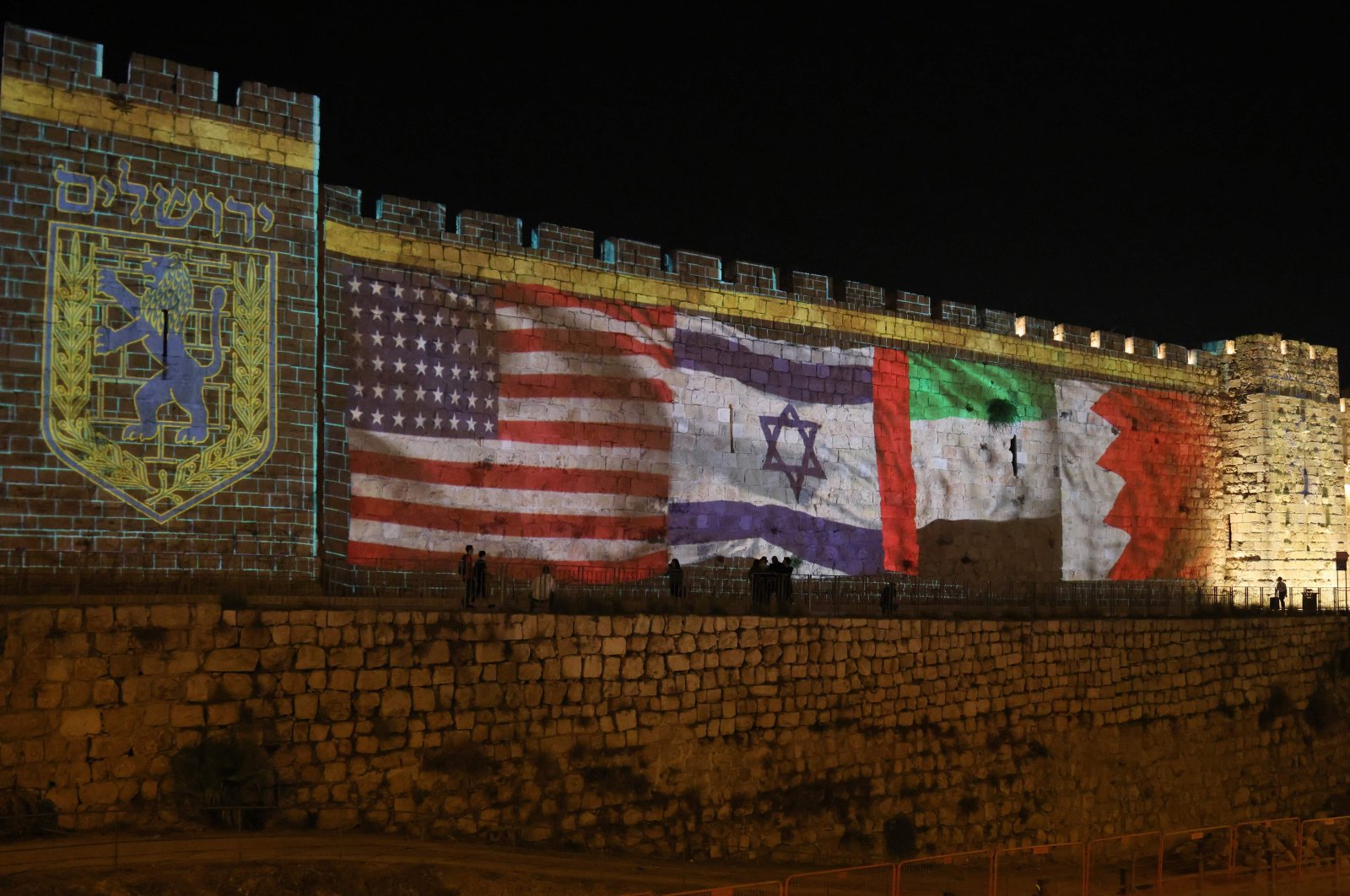 The flags of the U.S., Israel, the United Arab Emirates and Bahrain are projected on the ramparts of Jerusalem's Old City, in a show of support for Israeli deals with the UAE and Bahrain, Sept. 15, 2020. (AFP Photo)
by Nagehan Alçı Sep 19, 2020 12:05 am
RECOMMENDED

Alarm bells have started ringing since deals signed between the United Arab Emirates (UAE), Bahrain and Israel to normalize relations have highlighted the divide between Gulf state rulers and the Arab public.

The agreements were inked at the White House under the umbrella of U.S. President Donald Trump, who trumpeted them as steps toward the end of division and conflict.

Of course, normalizing relations is – in theory – a good step in achieving peace. But if this is at the expense of the fundamental rights of the Palestinians, it brings nothing but chaos.

Coming closer to Israel without protecting the rights of the Palestinians will only deepen divisions in the region. As is the case in Trump's Jerusalem move, the deals will only accelerate the split and increase anger, since the agreements – dubbed the "Abraham Accords" – don’t even mention a two-state solution.

Bahrain and the UAE are not the only ones. The U.S.’ faithful ally Saudi Arabia is probably up next. Egypt has already expressed its support, so the region is very clearly divided between those who align with Israel at the expense of the Palestinian people’s suffering and those who oppose it.

Turkey is a key country here, given its relations with both the U.S. and Israel while representing the strongest supporter of the Palestinians.

Ankara has condemned the agreement and said that the deal contradicts the commitments made under the 2002 Arab Peace Initiative and the Organisation of Islamic Cooperation (OIC).

The Turkish Foreign Ministry believes that the deal will encourage Israel to continue illegitimate activities and violations towards Palestinians.

President Recep Tayyip Erdoğan is a strong supporter of a just deal between Israel and Palestine and believes that the only way to achieve peace and stability in the Middle East is through a fair solution to the issue within the framework of U.N. resolutions and international law.

However, with this deal, the Middle East seems to be more divided than ever.

Bahrain, the UAE, Saudi Arabia, Egypt and Israel, backed by the U.S., are on the one side, while Turkey, Iran, Qatar and all the Arab people in this region are on the other.

This agreement will for sure make Erdoğan the leader of the Arab streets.

On the other hand, this agreement should also be seen as an alignment against the common enemy Iran. It enhances polarization and builds fronts in the Middle East that I think are quite dangerous. This move will encourage Israel to continue its illegitimate practices against Palestinians.

It is hard for Turkey to balance tensions. It has remained as the sole actor to call for peace on the side of the Palestinians but also part of international bodies.

Erdoğan's expectations are high. But it is a tough job. Dialogue should be maintained, but the Palestinians should not be thrown under the bus.