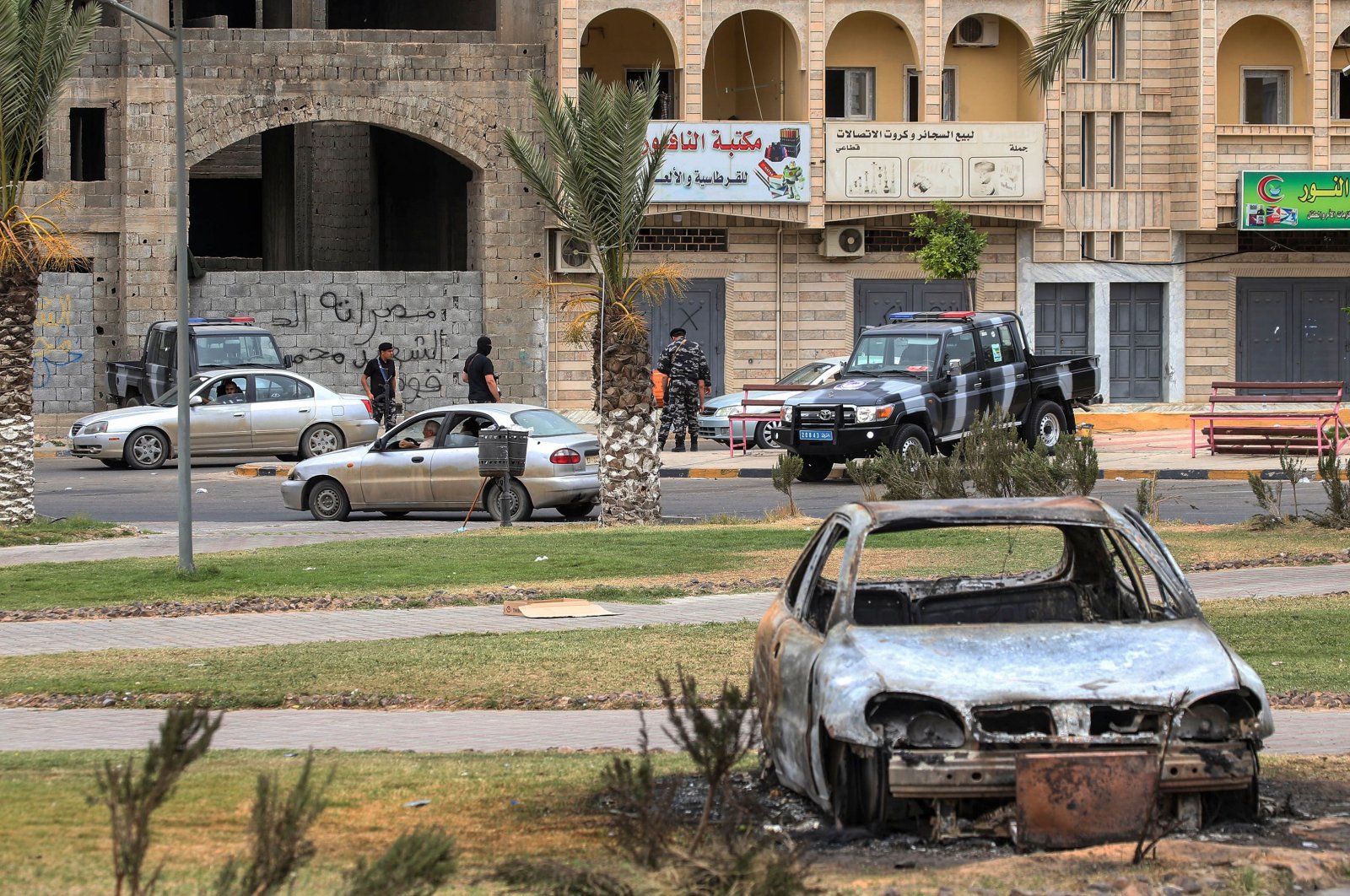 Members of security forces affiliated with the Libyan Government of National Accord (GNA)'s Interior Ministry stand at a make-shift checkpoint in the town of Tarhuna, about 65 kilometers southeast of the capital Tripoli, Libya, June 11, 2020. (AFP Photo)
by Burhanettin Duran Jun 15, 2020 12:05 am
RECOMMENDED

As Libya’s Government of National Accord (GNA) attempts to liberate Sirte and Jufra, diplomatic talks are regaining momentum. The latest move came from Egypt, where President Abdel-Fattah el-Sissi met putschist Gen. Khalifa Haftar and Libyan politician Aguila Saleh before unveiling the Cairo Declaration. That document relates to a cease-fire, a road map for political reconciliation, the establishment of the Presidential Council and elections within 18 months. Although Russia and the U.S. endorsed the call for a cease-fire, the Cairo Declaration, which exclusively deals with eastern Libya and intends to keep Haftar in business, does not create common ground or reconcile other stakeholders, including Turkey. Hence Ankara’s description of the declaration as "stillborn."

Turkey changed the course of the Libyan conflict by offering military and political support to Fayez Sarraj’s government and launched a diplomatic initiative to promote a political solution. Turkish President Recep Tayyip Erdoğan recently spoke with U.S. President Donald Trump and Russian President Vladimir Putin. Erdoğan announced that he and Trump had reached "agreements to usher in a new era" and hinted that Haftar could be sidelined entirely. His phone call with Putin, too, was arguably characterized by the latter’s curiosity about Erdoğan’s remarks. Following the talks, Ankara intends to work with Washington and Moscow through specialized commissions.

Turkey’s diplomatic initiative is evolving into a comprehensive policy with four pillars: First, Turkey and Libya need to strengthen their bilateral relations in the areas of security, energy and investments – from military bases to oil exploration on both land and sea and new investments by Turkish companies.

Secondly, the GNA, with help from Turkish military advisors and armed drones, must liberate Sirte and Jufra to regain control over the Libyan Oil Crescent. At the same time, Turkey, as the only country with a broad range of bilateral agreements in place with Libya’s legitimate government, should assume a defining role in that country’s reconstruction – from security reform to civilian infrastructure, basic public services and new investments.

Finally, there has to be a plan to ensure that the GNA has the upper hand in political talks. That solution ought to reconcile the various stakeholders’ interests rather than be one-sided. To accomplish this goal, Ankara must reach out to the relevant players, other than Haftar, in Tobruk and Benghazi.

The challenges facing Libya’s balance of power are twofold. First, there are shifting allegiances on both sides. There are multiple stakeholders and tribal influences at work, together with the disorganized nature of militias, that result in parties changing sides based on power calculations. It seems unlikely that Haftar, who repeatedly bombarded Tripoli, can return to the Libyan capital through a political reconciliation process. The people are unlikely to accept him and his return would likely be detrimental to the GNA. What could make it easier to sideline Haftar, however, would be to unite the Libyan warlord’s foreign sponsors around a new figure from eastern Libya. Although Saleh immediately comes to mind, other candidates could emerge. Yet the main difficulty will be to develop a solution to strike a balance between the expectations and fears of foreign governments entangled in the Libyan conflict.

Russia’s most recent military build-up is likely to give that country access to military bases in Syria and Libya. Needless to say, that would be a serious threat to Europe and NATO’s southern flank. If Moscow succeeds, Europe will end up facing Russian pressure from the East and the South. To be clear, Russia cannot be expected to limit its involvement to Libya once it gains a foothold in North Africa.

Although Washington remains distracted by the upcoming presidential election, the U.S. Africa Command expressed concern about Russia’s increasing level of activity in Libya. Ironically, NATO allies France and Greece play into Russia’s hands by supporting Haftar. To mitigate strategic pressure from Moscow, Germany will have to make France and Greece fall into line with the rest of Europe.

Without a doubt, Egypt remains a more important player compared to the United Arab Emirates (UAE) and Jordan. To make the political reconciliation plan work, Cairo’s security concerns must be addressed. In return, however, Egypt needs to leave the anti-Turkish bloc – comprised of the UAE, France, Greece and the Greek Cypriots.