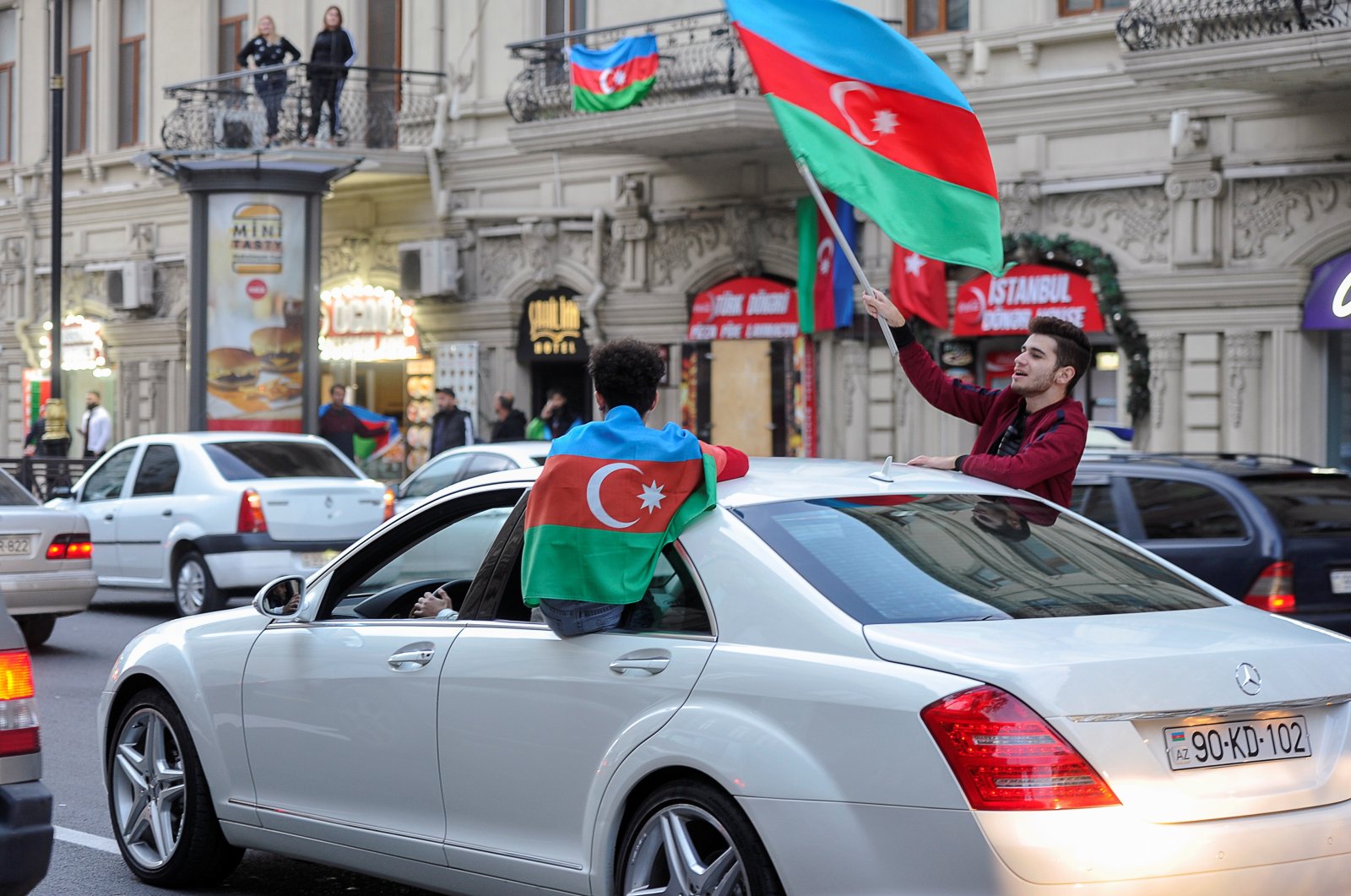 People with Azerbaijani flags ride in a car as they take part in celebrations in a street following the signing of a deal to end the military conflict over the Nagorno-Karabakh region, in Baku, Azerbaijan, Nov. 10, 2020. (Reuters Photo)
by Muhittin Ataman Nov 11, 2020 12:05 am
RECOMMENDED

After six weeks of fighting between Azerbaijan and Armenia, a cease-fire agreement was signed between the two conflicting sides. Azerbaijan won a huge victory on Tuesday that ended the 30-year-long occupation of Armenia and liberated Azerbaijan's territory. The peace deal, which was declared by Russian President Vladimir Putin, has historic importance and amounts to the capitulation of Armenia.

The cease-fire agreement came shortly after the liberation of Shusha, the historical, second-largest city in the Nagorno-Karabakh region, by the Azerbaijani armed forces, and the deal took effect on Tuesday at 1 p.m. local time. There was no way out for Armenia but to accept the defeat, as Armenian Prime Minister Nikol Pashinian pointed out. The Armenian government, therefore, admitted to defeat and officially ended the conflict.

Second, Armenia has agreed to withdraw from five occupied Azerbaijani areas immediately and will surrender control of the other two areas in the next two weeks. According to the peace deal, the Kalbajar region will be returned to Azerbaijan by Nov. 15, the Aghdam region by Nov. 20 and the Lachin region by Dec. 1.

That is, the 30-year occupation of the Azerbaijani lands will end by the first day of December. Later on, displaced civilians and refugees will return to Nagorno-Karabakh and the surrounding regions under the supervision of the United Nations High Commissioner for Refugees (UNHCR).

Third, Azerbaijan will not withdraw from the part of Nagorno-Karabakh it liberated during the last conflict.

Fourth, Armenia will have the 5-kilometer-wide (3.1-mile-wide) Lachin Corridor connecting Armenia to Karabakh, but the corridor will remain under the control of Russian peacekeeping forces. In return, Armenia will provide a transport and communication line between mainland Azerbaijan and the Nakhchivan Autonomous Republic. This corridor will allow the unrestricted movement of citizens, vehicles and goods in both directions.

This means Turkey will have a direct connection to all of Azerbaijan. This can be considered a significant step in strengthening the Turkish-Azerbaijani strategic partnership.

Fifth, a joint peacekeeping mission consisting of Russian and Turkish armed forces may be established and sent to the region to patrol the front lines. Russia, which has military bases in the region, is the traditional dominant geopolitical power in the region; therefore, it was expected that Moscow would eventually become involved in the conflict and mediate between the two conflicting sides.

Russia, which remained neutral during the most recent conflict and negotiated several cease-fire agreements, will deploy 1,960 soldiers, 90 armored vehicles and 380 units of vehicles and special equipment.

Considering the most recent developments in the region, it is obvious that Azerbaijan is the victor, Turkey is the real game-changer and Russia is the dominant geopolitical power. Turkey was and continues to be the only real supporter of Azerbaijan. It provided strategic and modern weapons to Baku along with support that contributed greatly to Azerbaijan’s self-confidence and its fighting power on the ground.

The conditions of the agreement may open new windows of opportunity in the region. As long as the coordination and collaboration continue between Russia and Turkey, the management of the crisis will be feasible.

All in all, the cease-fire agreement provided the necessary conditions for a long-term and comprehensive solution to the Nagorno-Karabakh issue on a fair basis and in line with the interests of the people of both countries. From now on, the Azerbaijani government will initiate a process of normalization in the liberated regions and develop a system for the return of the displaced Azerbaijani people.

Armenia will now have to accept the new realities on the ground, which reflect the legal and legitimate claims of Azerbaijan. In this context, normalization and rapprochement can start between Armenia and its two neighbors, Turkey and Azerbaijan. The two sides should not miss this opportunity.