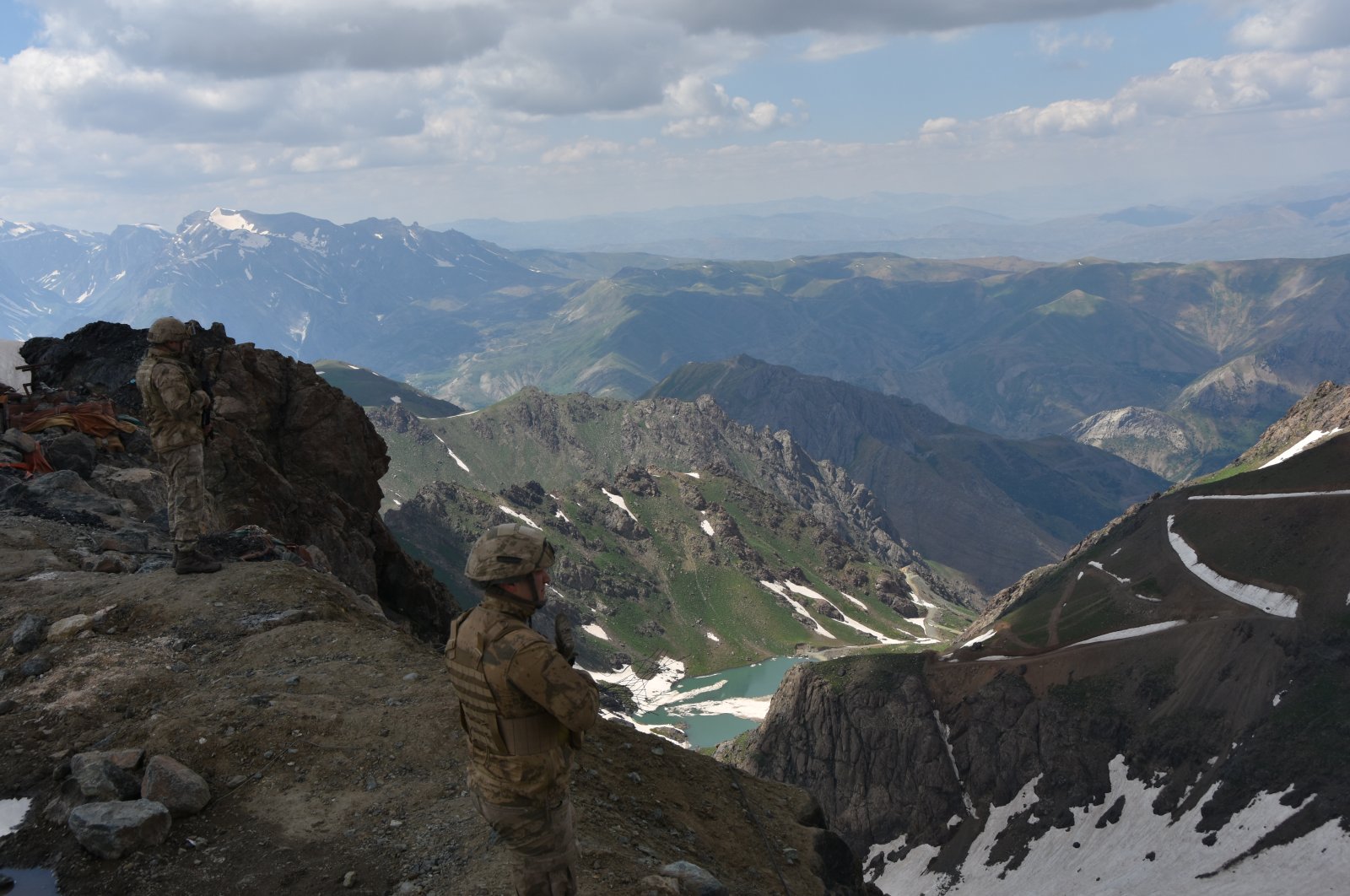 Turkish security officers guard a border base established to counter the threat of PKK terrorism, in the Yüksekova district of Hakkari province, southeastern Turkey, June 24, 2020. (AA photo)
by Talha Köse Jun 27, 2020 12:05 am
RECOMMENDED

The Turkish Armed Forces (TSK) have launched two operations, Claw Tiger and Claw Eagle, which constitute some of the broadest cross-border military operations against PKK targets in northern Iraq in recent years.

The objectives of the operations have been laid out as enforcing border security and preventing a spike in PKK raids from the Iraqi side of Turkey's border with its southeastern neighbor, which has served as a safe haven for the terrorist organization for the last three decades. There have also been efforts to make northern Syria a similar safe area for the PKK/YPG. The TSK has been pursuing a systematic strategy to prevent this new trend from taking root. Despite the significant international support given to the PKK/YPG, Turkey's counterterrorism strategy has achieved a great deal thanks to the country's rising military capacity.

The Iraqi central government's lack of capacity and resources to counter the presence of terrorists within its border has necessitated the Turkish government to conduct anti-terror operations in northern Iraq. Over the last couple of years, the PKK has tried to connect its operations in northern Syria and northern Iraq, thereby expanding its area of operations. The organization has significant international support – including from some of Turkey's NATO allies, who have propelled the PKK/YPG's expansion in northeastern Syria. There have also been efforts by a number of international actors to ally with the YPG/PKK and the Kurdish National Council (KNC) in Syria. In the last two to three years, the PKK has been increasing efforts to build new Qandil-style headquarters in the Sinjar Mountains, which is close to the Iraq-Syria border. The PKK/YPG is trying to strengthen its presence in Syria with the support of the U.S. This newly forming alliance and widening of the terror corridor is considered a new threat by authorities in Ankara.

The Claw operations were launched in May 2019 to expel the PKK from areas neighboring the border with Turkey. Camps and areas used by the PKK, such as Sinjar, Qandil, Karajak, Al Zab, Avasin-Basyan, Hakurk and Haftanin have been specifically targeted. The Claw operations were suspended in early spring because of the COVID-19 pandemic. The operations are being conducted to cut the PKK's strategic deployment in the Syria and Iraq border and cut the Syria-Iraq connections.

Turkey has been pursuing a systematic anti-terror strategy since the failure of the "resolution process." Targeting the terrorist threat at its source and targeting top-level leaders of the terrorist organization have been the two pillars of Turkey's anti-terror strategy ever since. Another related approach is to assume control of areas formally used as safe havens for terrorist groups. Turkey's capabilities to proactively target terrorist camps with drones and aerial campaigns have been expanded due to the country's booming military tech industry. The second pillar of Turkey's strategy involves targeting the group's top-level leadership in cooperation with the intelligence units. Close collaboration between Turkey's National Intelligence Organization (MİT) and the TSK has increased results on the ground over the last two years. Despite increasing international support for the YPG/PKK, there has been an active campaign against the organization over the last two years. This proactive approach has reduced the number of terrorists within Turkey to below 500 for the first time in decades.

The TSK will continue to assume control of areas used by terrorist organizations. Iraqi authorities have been unable to control these areas due to their lack of capacity – yet, for more than three decades, those areas have been used against Turkey as a hotbed of terror. Raids across the Turkish border and attacks on Turkish security units and civilians have led to hundreds of deaths. The foremost goal of the TSK is currently to destroy camps used by the PKK and reduce the group's manpower, arms and ammunition capabilities. One of the TSK's biggest challenges in this regard, however, is the group's penchant for using civilians as human shields. For a long time, the PKK has built its bases and training camps around civilian areas as a means of defending themselves against surprise attacks. This is a significant challenge for Turkish authorities, who aim to conduct operations with minimal civilian losses.