COVID-19 and Floyd riots: Trump's reelection is at risk 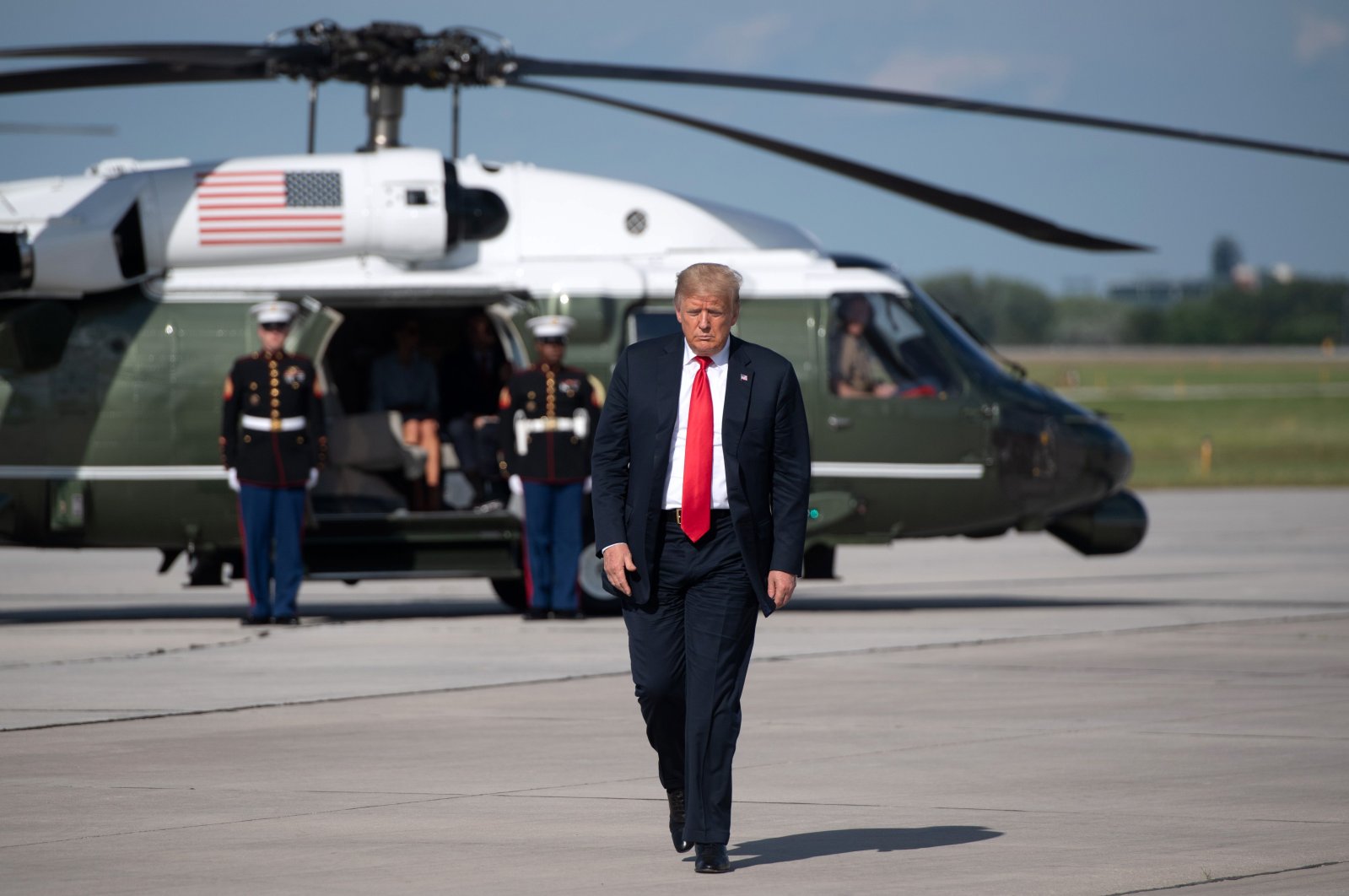 U.S. President Donald Trump walks to board Air Force One prior to its departure from Austin Straubel International Airport in Green Bay, Wisconsin, June 25, 2020. (AFP Photo)
by Kılıç Buğra Kanat Jun 27, 2020 12:05 am
RECOMMENDED

Last week U.S. President Donald Trump officially launched his presidential campaign by speaking in different rallies in Oklahoma, Arizona and Wisconsin. Prior to the COVID-19 crisis, he actually began his tours in February; however, he had to take a more than four-month break because of the outbreak. Since then more than 110,000 Americans have lost their lives due to the pandemic. More than 2.5 million people contracted the virus. The halting of economic activity made more than 44 million people apply for unemployment benefits. In the meantime after the killing of George Floyd, the U.S. faced the biggest mass protests since the assassination of Martin Luther King Jr. On top of everything in the last two weeks, COVID-19 made a comeback to the U.S. The daily number of cases hit a record high in the last few days. Especially in some of the southern states, including Texas, Arizona, California, and Florida, the number of cases started to put stress on the health systems in these states. Texas stopped the normalization process on Thursday, and three states – New York, New Jersey and Connecticut – decided to implement a 14-day quarantine for people coming from hot spot states.

Four months ago when Trump launched his campaign in Melbourne, Florida, it was regarded as the earliest reelection campaign of a sitting president. However, he seemed eager to make sure that he guarantees his reelection in November 2020. In February Trump had very good statistics in terms of unemployment numbers in his hand. He was recently acquitted from the impeachment process, and he was trying to use this “witch hunt” effectively during his campaign. In the meantime, the democratic primaries were still going on with four main candidates. Many expected the race among the democratic candidates to continue throughout spring. There was a lack of a unified message and mobilization among the frontrunners. During the pandemic, after Bernie Sanders halted his campaign, Joe Biden became the presumptive nominee for the Democratic Party.

This four-month period also led to serious ups and downs in Trump’s approval ratings. In January following the end of the impeachment process, Trump’s approval rating was almost 46%. Soon after the outbreak of the coronavirus pandemic, his rating rose to 47.5%. However with the prolongation of the pandemic and the Floyd incidents, today his ratings are around 42%. Similarly in January in a potential match between Trump and Biden, Biden had a four-points lead in the popular votes; however, his lead increased to 10 points. The polls show that other than whites without a college degree, in almost all demographic groups Biden is leading. One of the most critical groups for Trump has been those 65 and older. The polls show that Biden and Trump are in close competition in this group as well. More critically in the swing states, which helped Trump win the 2016 elections, including Michigan, Wisconsin and Pennsylvania, Biden is leading in the polls.

The 2016 elections demonstrated that one should not rely too much on the polls. However, the numbers demonstrate that the Trump campaign may need to work diligently in order to make a comeback following the COVID-19 and Floyd crises. So far, Trump is underscoring the danger of COVID-19 in his campaign speeches. However, the numbers from the U.S. are not agreeing with the president. Some states are already reconsidering the normalization process. In most of his speeches, he emphasizes law and order for the Americans, but it is not clear how long he can depend on this promise, especially after the end of the demonstrations in major cities. Making America Great Again was an appealing slogan in the 2016 elections, but now as the president of the U.S. for the last four years, he has to offer something more to mobilize his supporters. If the COVID-19 crises and its economic aftershocks continue, it will be challenging for him to pursue culture wars in order to consolidate his base. His campaign needs to work hard to give a new message to the voters – message that will convince the voters to go to the ballot box and vote for Trump for four more years.