Dan Brown, cities and how Turkey is dealing with coronavirus? 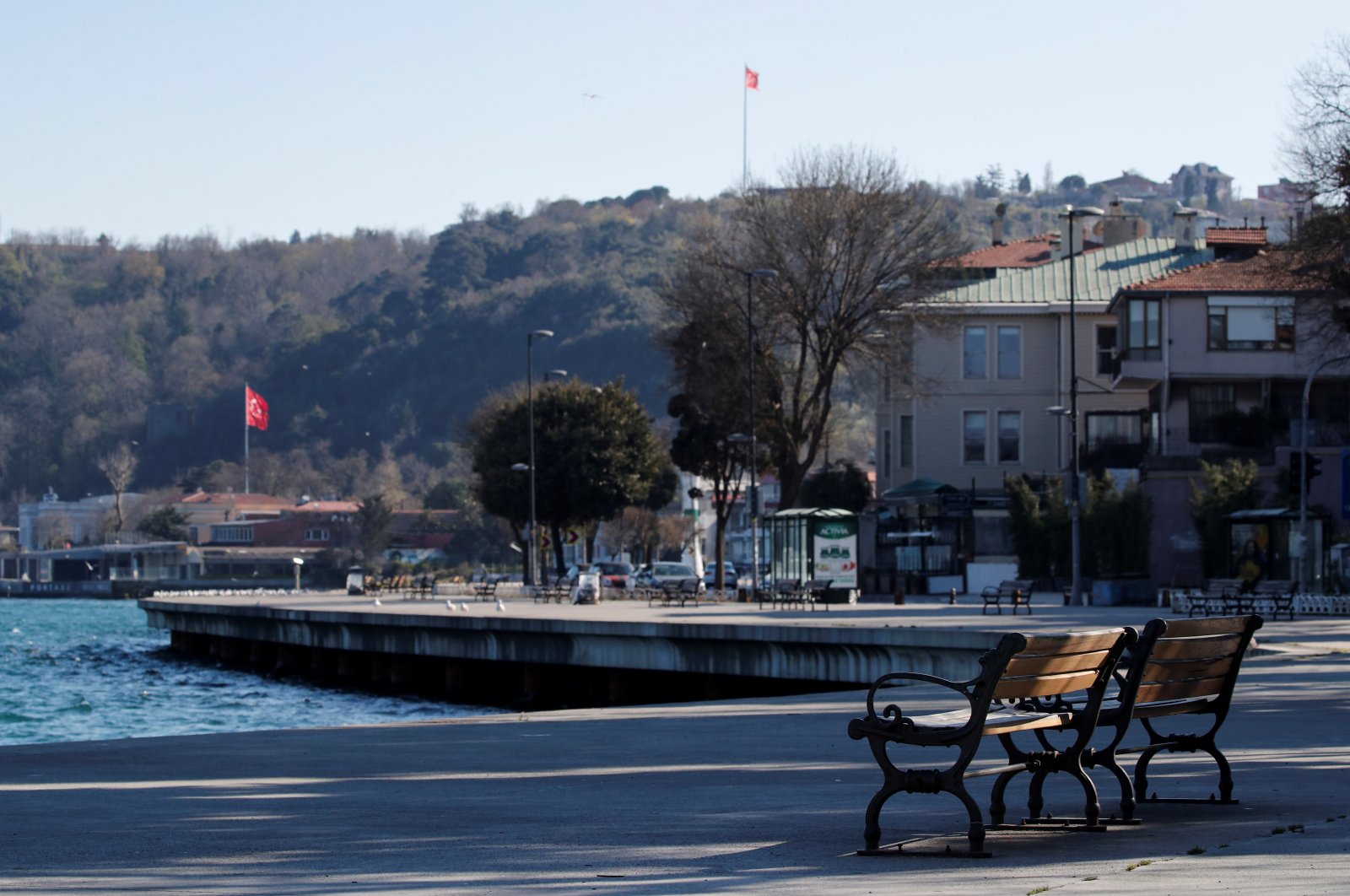 A general view of a deserted street during a two-day curfew which was imposed to prevent the spread of the coronavirus, Istanbul, April 12, 2020. (Reuters Photo)
by Kılıç Buğra Kanat Apr 21, 2020 12:05 am
RECOMMENDED

In Dan Brown’s thriller, "Inferno," the enigmatic, crazed billionaire geneticist Bertrand Zobrist drafts a plan to disseminate a deadly pathogen to the world in order to deal with the issue of the planet's out-of-control rates of population growth. According to Zobrist, in order to save the world, it is necessary to take a “bold” step and thus introduce a new plague capable of killing millions, if not billions, of people. The city he chooses to start this process is discovered by the hero of the series, Dr. Robert Langdon.

According to Zobrist, the epicenter of this pandemic should be Istanbul. Langdon figures this out by solving a puzzle that started with Botticelli's "Map of Hell" and Dante’s "Inferno." Other clues were located in Vasari’s "The Battle of Marciano" and the "Horses of Saint Mark" sculptures of Venice. All these clues pointed to Istanbul – not least given its long-held status as “the crossroads of the world.” Dan Brown himself notes that “Istanbul had, at numerous times in history, succumbed to deadly plagues that killed of enormous portions of its population."

In fact, during the final phase of the Black Death, this very city was referred to as the “plague hub” of the empire and the disease was said to have killed more than 10,000 residents a day at its peak. Several famous Ottoman paintings depict townspeople desperately digging plague pits to bury mounds of corpses in the nearby fields of Taksim. In fact, even earlier, during Byzantine times, the "Plague of Justinian" wreaked havoc across the empire's territories and beyond. According to historians, a third of the city's population died as a result of this outbreak. In fact, just like all the major cities around the world, Istanbul has been the victim of various forms of pestilence due to its place as a center of constant commerce and movement of people and goods.

The city's place as a capital of various empires has exposed it to such risks more than most throughout history. As historian Nükhet Varlık argues in her book “Plague and Empire in the Early Modern Mediterranean World: The Ottoman Experience," empires create different networks of exchanges of goods and services and these networks become the main instruments of expansion of epidemics. She writes that “large urban areas, especially capitals of empires, tend to be visited by a greater number of epidemics than smaller towns or villages. Large cities like Istanbul worked like magnets; just as they attracted goods, people, capital, and knowledge, they also attracted disease.” She further contends that “in the context of the political economy of an early modern empire, Istanbul’s history can be reconstructed as the capital of plague.”

The capitals of other empires and economic and cultural share similar fates regarding pestilence and pandemics throughout history. As a result, most of these become identified by the names of cities – regardless of whether they were the epicenter. but rather when they became the hub. As a case in point, the Great Plague of Seville between 1647-1652 killed a large portion of the city's population. The Great Plague of London also killed a quarter of the population of the city in 1665 and 1666. In 1679, the Great Plague of Vienna became another target for this pandemic that resulted in the deaths of tens of thousands. In 1720, this time it was the Great Plague of Marseille that cost the lives of hundreds of thousands. In the 20th century, the Hong Kong plague took the lives of countless residents, causing a huge outmigration from the city.

In the era of the coronavirus, we have seen yet again that it is cities that have been the hub of various networks that are at the forefront of the outbreak of the pandemic. In the first seven nations to confirm cases, it could be clearly seen that the infection rates were highest in economic and political capitals. In the U.S., a third of all the cases – 241,000 out of 738,000 can be found in New York City. Again, almost 40% of all deaths have occurred in this state. In Spain, more than a quarter of all cases took place in Madrid and its environs. In Italy, more than a third of all cases have occurred in Lombardy, the economic hub and the most prosperous region in the country. It is no small coincidence, then, that according to the OECD, the gross domestic product of the region is 35% higher than the European average.

Istanbul has shared the same fate as other major cities and economic hubs in this regard. A relatively large portion of the total infected in Turkey is from the city. Plus, even among cases in smaller cities, it is believed that the main source has been those having traveled from Istanbul. However, this time, compared to its counterparts in terms of economy and population, the rate of death in Turkey general – and Istanbul particular – is considerably low, with the number in the U.S. coming to 40,000 and Italy and Spain – 20,000.

In Turkey, the number is less than 2,000. Analysts around the world have ignored this fact when delivering statements in regard to the containment and treatment of the coronavirus. The successful handling of the pandemic has something to do with yearslong investment in the health care sector and public health policies in Turkey. It was stated from the very beginning that in terms of ICU units per capita, Turkey ranked one of the highest.

In Istanbul, stay-at-home alerts from the government, travel restrictions and the early shut down of schools have played a major role. The quarantine of all major cities later contributed to this effort in order to lower the impact of international travelers in carrying the virus and spreading it to others. To this end, the government quarantined more than 30,000 Turkish citizens traveling from abroad for 14 days, sheltering them free of charge in student dormitories around the country.

The fact the government ordered residents to stay home but also ordered the mobilization of basic services for groups most at risk (i.e. those over 65) also lowered the contamination rates of this age group by 40%. It also implemented this order much more feasible and sustainable. The free distribution of masks for all citizens, as well as disinfectants and masks for the elderly, provided an important contribution in dealing with the outbreak.

On top of these policies, several initiatives have also helped to keep these numbers lower than those of other countries. Unlike abroad, the Health Minister of Turkey called on everyone who showed symptoms or had interaction with people who were infected to be tested at health facilities. He made it clear that Turkey had both the capacity and capability to test individuals and start treatment. The data provided early on showed that demonstrated that beginning treatment early lowered the risk of pneumonia for coronavirus patients and decreased the possibility of being taken care of at ICU units and through intubation. Thus, this early intervention approach Turkey took, coupled with its isolation measures, is said to have been key to keeping casualty numbers low.

Finally, by presidential decree, last week it was declared that treatment for coronavirus patients in public hospitals would be made free of charge. This included testing, diagnostics and tests such as X-ray and CT scans. If necessary, it was deemed that treatment and medication would similarly be provided – as well as follow-up visits. This is a major initiative launched by the Turkish government, considering the average cost of the treatment in hospitals around the world; an initiative that will provide health services for everybody.

The coronavirus epidemic has demonstrated that the preparedness, previous experiences and public health approaches of governments play important roles in dealing with any outbreak. Istanbul, as one of the riskiest cities in the world in terms of the movements of goods and services, has been dealing with the crisis in an exemplary manner. As part of a brotherhood of major cities fighting against pandemics, it pays to have those who are more successful in handling the crises setting an example for others.