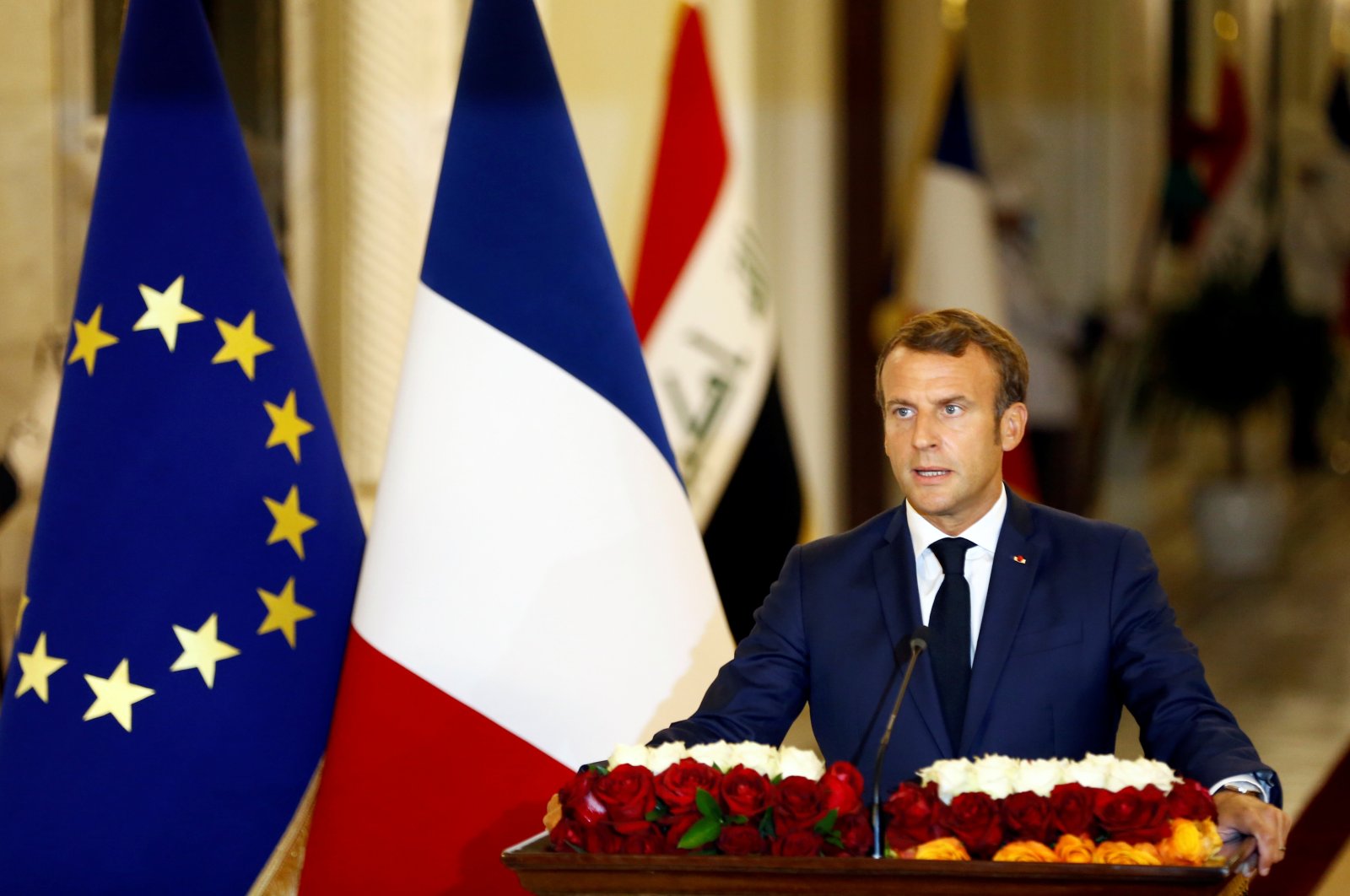 Tuesday was Lebanon’s centenary, and French President Emmanuel Macron marked it by planting a cedar tree while French jets flew over the country. This was the second visit by Macron following the devastating explosion at the Port of Beirut. He toured Beirut’s neighborhoods where Lebanese politicians are not welcome and huddled with protesters who want the downfall of Lebanon’s establishment. As part of his PR strategy, he even visited Fairuz, a Lebanese singer who is the single most popular cultural icon of Lebanon, in her house and had dinner with her.

Within days of the explosion, Turkey’s Vice President Fuat Oktay visited the Lebanese capital along with Foreign Minister Mevlüt Çavuşoğlu and said all of Turkey's hospitals and air ambulances would remain at Lebanon's service. Iranian Foreign Minister Javad Zarif also paid a visit to the country coinciding with U.S. Undersecretary of State David Hale. Many high-level representatives from European countries such as Britain also visited the city.

Suddenly the Lebanese, who have felt abandoned for a long time, started to think that they are not alone. But Macron's first visit following the French minister of armed forces was different than the others. It was intriguing and aroused mixed feelings. Under normal circumstances, Lebanon would be annoyed for being subject to external interference, but Macron was standing in for Lebanon’s leadership and dictating them, abusing the pain and troubles of Lebanese people. He was overconfident in front of the cameras, and it was like he saw himself as the savior of the country.

During his second visit, he was there to have talks with Lebanese leaders to make sure that they were ready to implement reforms immediately required for the survival of the country, which was already facing an economic crisis. He said Lebanese leaders would be sanctioned if reforms are not implemented – as if Lebanon is still a French mandate. Luridly, the future of Lebanon began to look similar to its past, and many started to ask what Macron is planning.

“When it comes to Mediterranean sovereignty, I have to be consistent in deeds and words. I can tell you that the Turks only consider and respect that. If you say words that are not followed by acts ... What France did this summer was important: It’s a red line policy. I did it in Syria,” he stated.

What France has done in Syria is supporting the outlawed PKK’s Syrian branch, the PYD, and its armed wing, the YPG, which has aimed to found a statelet in northern Syria. That plan was wiped out by Turkey’s ground operations. What France has done in Libya is backing a war criminal, putschist Gen. Khalifa Haftar, against a U.N. recognized government, the Government of National Accord (GNA). Turkey has reversed the course of events on the ground in Libya and prevented Haftar's advance through its support of the legitimate government and spoiled Paris' plans as well as those of Abu Dhabi, Cairo and Moscow. It is, of course, normal for Macron to be mad and feel humiliated as all his attempts to design the Middle East are being blocked by Turkey again and again.

In June, the French president accused Turkey of playing “a dangerous game” in Libya, although Paris has been sending clandestine military aid for several years to the war-torn country. This has been verified in many reports. He made this statement after France alleged that a Turkish naval ship harassed a French warship on a NATO mission. The accusation has been investigated and has yet to be confirmed by NATO. During his speech, he said, “And I'll take you back to my statement last year on NATO being brain-dead. I think this is the best example of it.”

The French president first made the “NATO’s becoming brain-dead” remark last November after U.S. President Donald Trump decided to withdraw American troops from northern Syria right before Turkey launched its third ground operation against the PKK/YPG terrorist organization. I will not be surprised if he repeats his “brain-dead” claim soon by correlating his argument with the developments in the Eastern Mediterranean.

Obviously, Macron has adopted an adversarial position since he is obsessed with Turkey. Instead of working for a solution over increasing tension between two NATO allies, he is trying to set European countries against Turkey while following an agenda meant to stalemate Ankara. He has gone about this by making alliances with non-NATO countries such as the United Arab Emirate (UAE) and Russia and backing terrorist organizations such as the PKK/YPG in Syria or criminals such as Haftar in Libya. But why does Macron step forth in Libya or Lebanon or the Eastern Mediterranean while other Western countries choose not to get directly involved?

As British Prime Minister Boris Johnson is busy with the Brexit endgame problem, German Chancellor Angela Merkel has chosen to keep a low profile due to a paralyzed grand coalition in Germany and the U.S. has lost its authority over the West, it looks like President Macron has seen the vacuum in question as an opportunity. He now acts as if he is Europe’s foreign policy leader by default and thinks that he has to run the show because there is a diplomatic-relations gap in the Western world.

Other than his adventurous goals that would serve the interests of France in the Middle East, he has other thoughts on his mind. Macron believes that the fractures in the EU and the stagnation of its economy will eventually bring an end to the union. He tries to convince Europe that the EU will soon lose its seat as a global decisionmaker if it goes on like this. Chasing rainbows sometimes, he has dreams about eurozone reform and the “restructuring of Europe.” Of course, he is right to worry about the future of the EU, but he makes the others concerned as he recklessly tries to shake the system. With his “brain-dead” allegation, he is trying to show European leaders that Europe can no longer rely on America to defend NATO allies. He presses for a greater Europe in terms of defense; he calls for a European army.

According to him, “a true European army” will protect Europe from “China, Russia and even the U.S.” However, in the meantime, he cozies up to Russian President Vladimir Putin. He attempted to broker talks between Russia and Ukraine. Lately, he proposed EU mediation to solve the political crisis in Belarus, including Russia. He has tried to play a role as a U.S.-Iran peacemaker. He invited Chinese President Xi Jinping to Paris for talks on more cooperation between China and the EU.

All those might seem impressive, but his initiatives have not gone beyond flashy statements, catchy phone calls and glittering meetings at the Elysee Palace so far. More than that, he is irritating fellow Europeans as he takes his own way, becoming noisier. Many capitals in the Nordic-Baltic region, Central Europe and Eastern Europe are concerned about his actions toward a “Russia reset.” He says the Western Balkans has to wait for a long time before joining the EU, which will only benefit Russia. Besides, he is seen as an amateur to play roulette with such a professional world leader, Putin. In addition to that, many have doubtfully asked if Macron’s China step is for Europe or for France’s own interests. Also, his gamble to get the U.S. and Iran to talk didn’t work. And he forgets that his ambitions are cautiously watched by Berlin even though the Germans prefer to remain silent these days. Moreover, he annoys NATO allies with his NATO criticism and European army calls.

Saying that the military alliance is far from needing life support, even Merkel condemned his “drastic words” on NATO when Macron uttered “brain-dead” for the first time. Britain is opposed to a European army, as it carries the potential risk of creating a parallel structure to NATO.

France, instead of NATO?

When you look at his statements, the idea of creating a European army will make the EU stronger and less dependent on the U.S. But this will come at a price. Lessening dependency on Washington will enlarge the fissure between the EU and the U.S. and weaken the Western alliance in the global arena. Most importantly, a European army and NATO cannot coexist. If the European leaders are persuaded by the French president, they will probably bring an end to the transatlantic alliance.

The irony is that the idea of a European army dates back to the years following World War II, and it might have come to fruition if then-French President Charles de Gaulle had not prevented it. He wanted a directorate of three – namely France, Britain and the U.S. – to dictate Western security. When the idea of a “European defense force” was proposed, de Gaulle worried that a European army would threaten French sovereignty and integrity and could bring back a militarized Germany. So, the proposal never passed in parliament.

Then again in 1966, due to souring relations between the U.S. and France, de Gaulle downgraded France’s membership in NATO and withdrew France from the integrated military command of the alliance to pursue an independent defense system. France later rejoined NATO in 2009. Formally, de Gaulle’s decision to withdraw was based on his suggestion that France, the U.S. and Britain had to be on equal footing within NATO in terms of nuclear energy. But in fact, he was irked by American military and political influence over Europe.

After all, de Gaulle rejected a European army idea in the post-war era because he was opposed to giving power to Germany and took France out of NATO since he disliked the U.S. penetration of Europe’s political arena. Macron claims that he is trying to unify Europe’s military power, but the question is: Is France ready for a rearmed Germany especially while Britain is leaving the EU? Will Europe be strong enough to deal with Russia? And who will protect Europe from the threats coming from the East if Turkey is excluded from the equation?

He might think that the current functioning of NATO is downrating the role of France in international affairs. Or more, he is eager to give France a leading role in a new military alliance as it will be the founder state. Would NATO be NATO if the U.S. is out? Would the Warsaw Pact die if the USSR didn’t dissolve itself in 1991? Does Macron actually want to dominate Europe while he says that Europe has to be controlled by Europeans?

Macron might try to portray France to Europe and the rest of the world the way that de Gaulle once did. However, France no longer carries the political or economic weight to be a top global actor. He also tries to depict himself to France as a modern de Gaulle. But he talks too much and does not know that throwing ideas into the pot does not make one a leader.