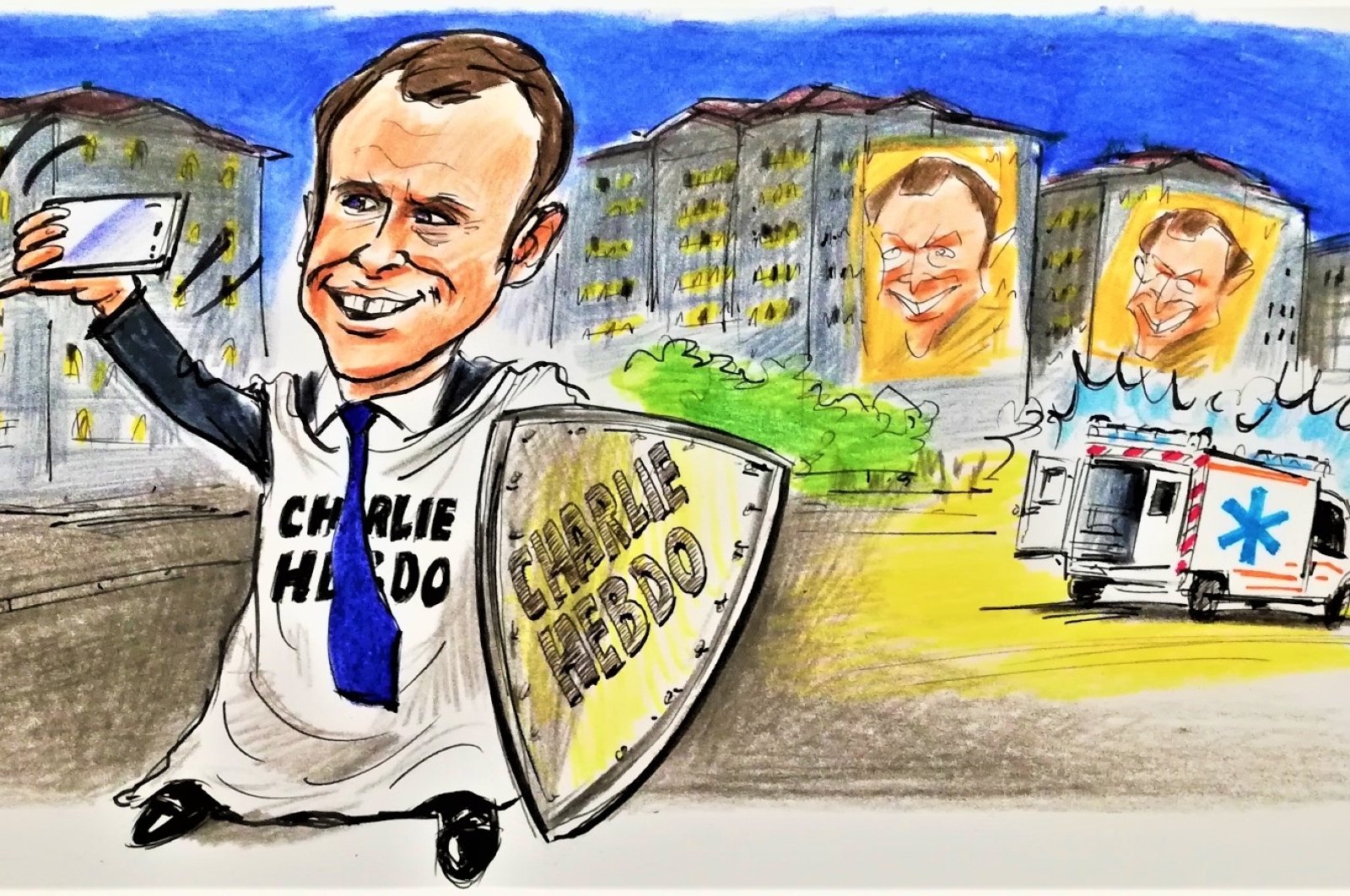 French President Emmanuel Macron is in a dangerous tailspin. His government not only turned a blind eye to offensive depictions of Prophet Muhammad, an insult against Muslims’ sacred values but projected them on public buildings in the name of free speech.

Erdoğan also warned European leaders against the looming danger: “Europe’s prudent, moral and conscientious leaders must tear down the walls of fear and start talking about Islamophobia and anti-Muslim sentiment. Without further delay, European politicians must stop the hate campaign led by Macron.”

The current war of words is part of a broader confrontation between Erdoğan and Macron. After Syria, the Eastern Mediterranean, Libya and Nagorno-Karabakh, the question of Islam fueled tensions between the two leaders.

The French president, who knows that Turkey’s leader is opposed to some Arab rulers would respond vocally to an attack on Islam and the Prophet Muhammad, engages in an act of provocation. Instead of combatting systemic Islamophobia, he promotes French secularism and attempts to impose a so-called reform agenda on Islam.

Macron intends to pass new laws to further repress the Muslim way of life. His government prepares to take fresh steps regarding the Islamic headscarf, the training of imams and Arabic-language schools.

This is not just a drift away from French secularism. The new policy also threatens to turn France’s Muslim community into a “parallel society” and to empower advocates of violence. The French media, too, endorsed Macron’s Islamophobic agenda and leftist groups defending Muslims’ rights, not just terrorists, are regularly targeted by media networks.

In the name of combatting Islamic "separatism,” Macron is creating an imaginary monster to be exploited on the campaign trail. Confident in the popularity of anti-Erdoğanism in France and the rest of Europe, he seeks to equate Islam with Turkey and its president.

There is no doubt that Macron would like to make up excuses in order to get European leaders to sanction Turkey in December. The French president desperately seeks to avenge his losses to Turkey’s leader in North Africa, the Eastern Mediterranean, Syria and the Caucasus.

What is difficult to understand, however, is that the French president seems to disregard the risks of insulting the sacred values of some 2 billion Muslims and imposing his "reform" agenda on them. Why does Macron downplay the problems that his country stands to experience as a result of alienating 30 million European Muslims – including over 5 million Muslims in France?

Judging by the initial reactions, Europe won’t heed Erdoğan’s warning against “a lynching campaign against Muslims akin to what the Jewry had to endure before World War II.” Marine Le Pen, who chairs the far-right National Rally (RN), has already asked for a blanket ban on the Islamic headscarf in public places.

Let’s not downplay the impact on far-right movements in European politics either as centrist parties are increasingly vulnerable to racism and Islamophobia.

In Austria, Sebastian Kurz, who dismissed a proposed ban on the Islamic headscarf as populism in 2010, has since become a poster boy for that campaign and should serve as a warning against the future course of European politics.

It seems that this new generation of politicians did not serve Europe well. Racism and Islamophobia are on the rise, as Austria and Germany join France in attempting to “domesticate” Islam. In the name of integration, European governments put in place mechanisms to forcibly transform, control and discipline the Islamic faith and Muslims.

For the record, efforts to create a French, German or Austrian Islam through state policy could only backfire and would not only result in the arbitrary limitation of the Muslim community’s religious freedoms but also make Europe surrender to a wave of authoritarianism. It doesn’t matter whether one draws parallels between the current developments and Europe in the 1930s or the Middle Ages. It is a recipe for disaster.

Macron, whose stated purpose is to build an Islamic Enlightenment, sends Europe down a dangerous path. Endorsements from Saudi Arabia or the United Arab Emirates (UAE) won’t change the fact that Prophet Muhammad is being insulted or cover up Macron’s arrogant project of “Islamic engineering.” Nor will they silence Erdoğan’s righteous protest.

Let us not forget that the Turkish president has warned Europe against a danger that Macron seems desperate to create.