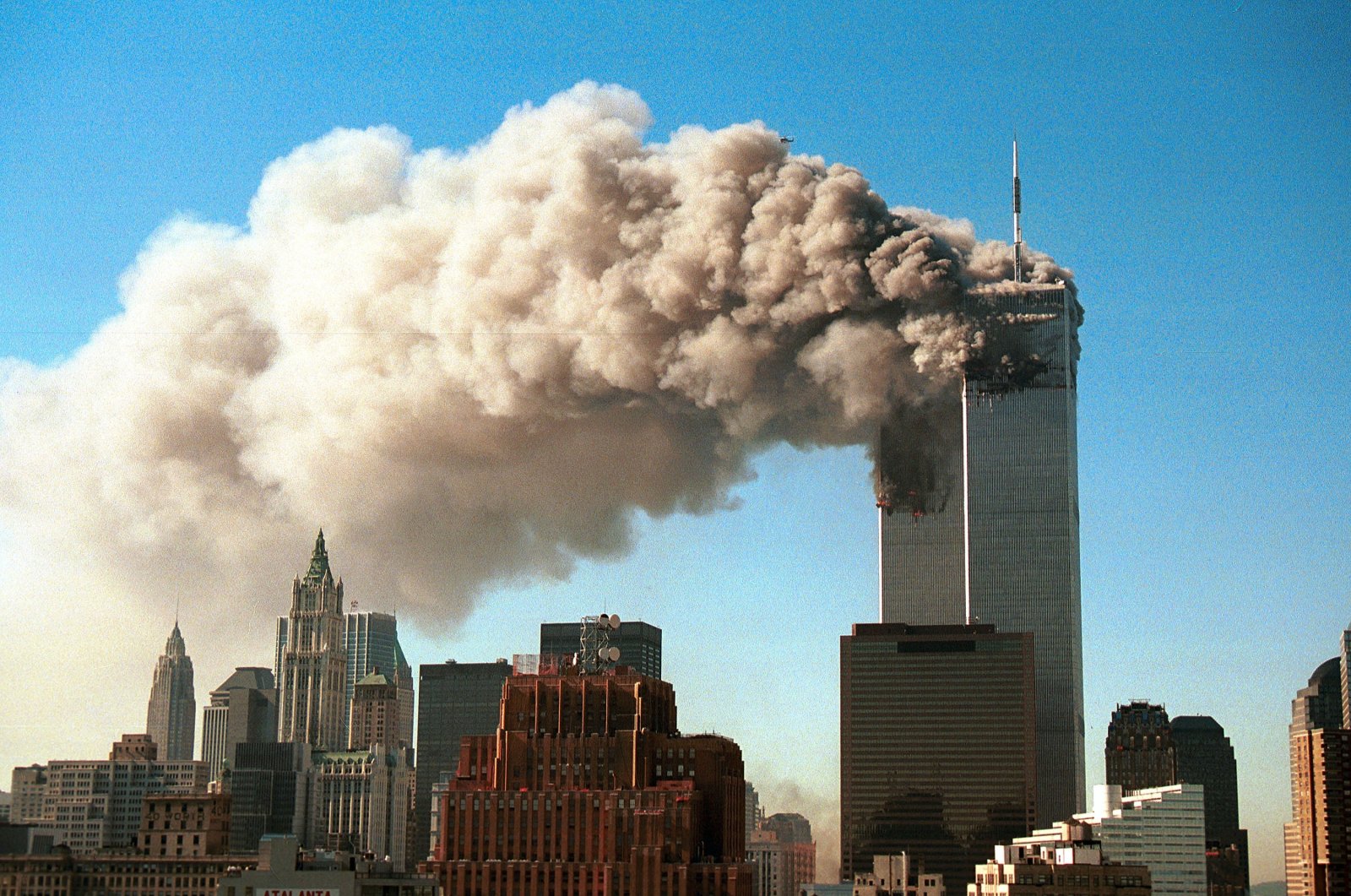 Smoke pours from the twin towers of the World Trade Center after they were hit by two hijacked airliners in a terrorist attack in New York City, U.S., Sept. 11, 2001. (Photo by Getty Images)
by Hakkı Öcal Sep 13, 2021 12:05 am
RECOMMENDED

Andrew C. McCarthy, a contributor at National Review and Fox News, in his 9/11 anniversary article in The New Criterion September issue, writes that “Anniversaries are occasions for marking history. But history is only clarifying if it is complete.”

It is a "starting point," according to Mr. McCarthy, “like the (former U.S. presidents) Lincoln and Kennedy assassinations” prompted the start of “a societal sea change.” This “singularly horrific event” occurred when a bunch of terrorists flew two jumbo jets into the twin towers, in “the most destructive attack on the homeland ever carried out by a foreign enemy,” killing 2,977 and wounding over 6,000 more.

But it is not limited to just that event. Those fateful flights have a "before" and "after."

In his 5,000-word article, in which he dedicates sections to explaining how “Shariah laws” should and should not be interpreted by Muslims, Mr. McCarthy does not include a single sentence about the personalities who created the terrorists and why the latter attacked the United States of America. Mr. McCarthy, a former federal prosecutor, profoundly praises the U.S. Customs and Border Protection's rejection of entry to the 20th terrorist but blames the other 19 terrorists waltzing into the country and private pilot schools on the “dismal performance by U.S. immigration and intelligence agencies.” Should this 20th terrorist had not been stopped, there would have been enough hijackers to fly Flight 93 toward Washington to hit the Capitol or White House, resulting in the decapitation of the U.S. government.

To his credit, Mr. McCarthy does concede that the radicalism that led to the 9/11 attacks started in Afghanistan, not in 2001 but in the 1970s. He accepts the fact that the U.S. government provided money and arms (but to whom?) to neutralize the occupying Soviet army. Don’t expect answers to questions like where those “Arab-Afghans” came from or who designed the plan to plant seeds of radicalism conspiracy based on a perverse interpretation of Islam in simple students in back-alley madrassas in Pakistan and India. Who brought the mastermind of what would become the worldwide network of radicalism, al-Qaida, to Afghanistan? Why did Osama bin Laden turn against those who helped him build his empire and establish his mujahideen army?

A self-credited student of Islam and radicalism, Mr. McCarthy purports that the radicals believe history is on their side. He says that they believe they are winning, that their opponents are of weak will and that they will ultimately prevail through patience and ruthless faith. He generalizes his insubstantial, groundless theory of radicalism and applies it to the entire history of Islam and all Muslim societies: “There is deep self-deception in this perspective, as if Islamic history, despite the long-standing backwardness of fundamentalist Islamic societies, has been a series of uninterrupted conquests.”

This is not true; Muslims have never deceived themselves into believing divine intervention is guaranteed in fights with others. Throughout their history, Muslims have suffered defeats in wars. The Afghan resistance against the Soviet occupation was also about to lose its battle. But it is “America that made bin Laden’s dream come true,” as Wajahat Ali, a senior fellow at the Western States Center and Auburn Seminary, writes in his Daily Beast article.

There are extremely perilous ideological fantasies that lack solid research circulating about the background of bin Laden and al-Qaida. Many newspaper columnists had already forgotten that U.S. President Jimmy Carter had initiated a covert program through the CIA to financially support the Afghan rebels, the "mujahideen" holy warriors, in July 1979. To Carter's surprise, the CIA expanded the program, code-named Operation Cyclone, and began providing weapons and money to the rebels through the Pakistani intelligence services. They are quick to forget “Afghanistan Day” on March 21, 1982, when U.S. President Ronald Reagan proclaimed that watching “the courageous Afghan freedom fighters battle modern arsenals with simple hand-held weapons is an inspiration to those who love freedom.” The next year Reagan and British Prime Minister Margaret Thatcher would allocate billions of dollars to those whose “courage teaches us a great lesson – that there are things in this world worth defending.” What the two leaders of the “free world” were ensuring was the fall of the Soviet Union. The two leaders decided that Afghanistan was the Soviet Union's Vietnam and that a kick on the Soviets' behinds in Afghanistan would free Eastern Europe from Soviet rule.

It did, actually. The Soviets appointed Mohammad Najibullah Ahmadzai, commonly known as Najibullah or Dr. Najib, as president in Afghanistan and left the country. Reagan, despite all his promises of non-interference in Afghanistan's affairs made to Mikhail Gorbachev, the eighth and last leader of the Soviet Union, did not watch the colossal collapse of the Soviet Union. Reagan was busy creating a new unipolar political order, and therefore, left bin Laden and the monster they had created alone... until the day he decided the time had come to start the global struggle for Islam.

During that time (1989-1992), there was a civil war in Afghanistan among the tribal and ethnic groups. The mujahideen, abusing the power vacuum in the country while enjoying the on-and-off support of various warlords, established a strong “base” (in Arabic, al-Qaida) for themselves – with the assistance of Pakistan and the CIA. When mujahideen thought the time was ripe, they returned, captured, tortured and violently killed Najibullah and his brother.

Bin Laden was apparently not very concerned about the internal developments of a single country, he had global interests. For instance, he asked the U.S. to help in the Gulf region, like the request to help reign Iraq's Saddam Hussein in. They not only rejected him, but they asked the Saudi government to intern bin Laden in a remote part of Arabia. The pro-Western Saudi royal family took away bin Laden's passport and forced him to stay in Taif. Angry about being interned, bin Laden vowed to start his global battle, departing from Saudi Arabia for the more militantly "radical" Sudan.

After more than a year of preparation, al-Qaida struck for the first time. On Dec. 29, 1992, a bomb went off at the Gold Mohur hotel in Aden, Yemen, where U.S. troops had been staying while en route to Somalia, though the troops had already left when the bomb exploded. The bombers targeted a second hotel, the Aden Movenpick, where they believed American troops might also be staying. That bomb detonated prematurely in the hotel car park, around the same time as the other bomb explosion, killing an Austrian tourist and a Yemeni citizen. Bin Laden claimed responsibility for the attack in 1998.

Afterwards, bin Laden fled to Islamabad and created his compound to run his holy war.

On Feb. 26, 1993, the World Trade Center was bombed for the first time. A bomb built in Jersey City was driven into an underground garage of the World Trade Center. The blast killed six people and injured 1,500 others. The attack's mastermind, Ramzi Yousef, had been trained in al-Qaida camps.

On Nov. 13, 1995, a car bomb exploded at a facility in Riyadh, Saudi Arabia where the U.S. military was training Saudi's national guards. Five Americans and two Indian nationals were killed and 60 people were wounded.

In August 1998, al-Qaida operatives carried out the bombings of the U.S. embassies in Nairobi, Kenya and Dar es Salaam, Tanzania, killing 224 people and injuring more than 5,000 others.

In October 2000, an explosion in a small boat alongside the USS Cole, a Navy destroyer, as it was refueling in the Yemeni port of Aden, ripped a 40-foot-wide (12-meter) hole near the waterline of the Cole, killing 17 American sailors and injuring many more.

And finally, the Sept. 11, 2001 attacks on the Pentagon and the World Trade Center.

The most destructive act ascribed to al-Qaida was its series of attacks in the United States on Sept. 11, 2001. Four commercial jet airliners were hijacked. Two of the planes crashed into the twin towers, which later collapsed, destroying the rest of the World Trade Center building complex. The third crashed into the Pentagon and the fourth into a field during a struggle between passengers and hijackers to control the airplane. Nearly 3,000 people were killed in the attacks, making them the deadliest act of terrorism to occur in history, in which more than 6,000 others were injured. Bin Laden initially denied his organization's involvement, but later, in 2004 admitted al-Qaida was responsible.

It was would not be bin Laden’s last act of terrorism. Until American soldiers killed him on May 1, 2011, at least 50 bombings, attacks, suicides and suicide bombings had been claimed by al-Qaida organizations.

U.S. President Franklin D. Roosevelt is reported to have said this about Rafael Trujillo, dictator of the Dominican Republic: “He may be a bastard, but he's our bastard.”

On the 20th anniversary of the most shameful act of terrorism, humanity deserves to know the truth – especially the victims. The American people deserve to know the truth about their very own bastard who returned and stung and stung.

Mr. McCarthy should be as familiar with Galatians 6:7 as he is with Shariah: “Do not be deceived: God cannot be mocked. A man reaps what he sows.”