Fight over digital sovereignty about to begin 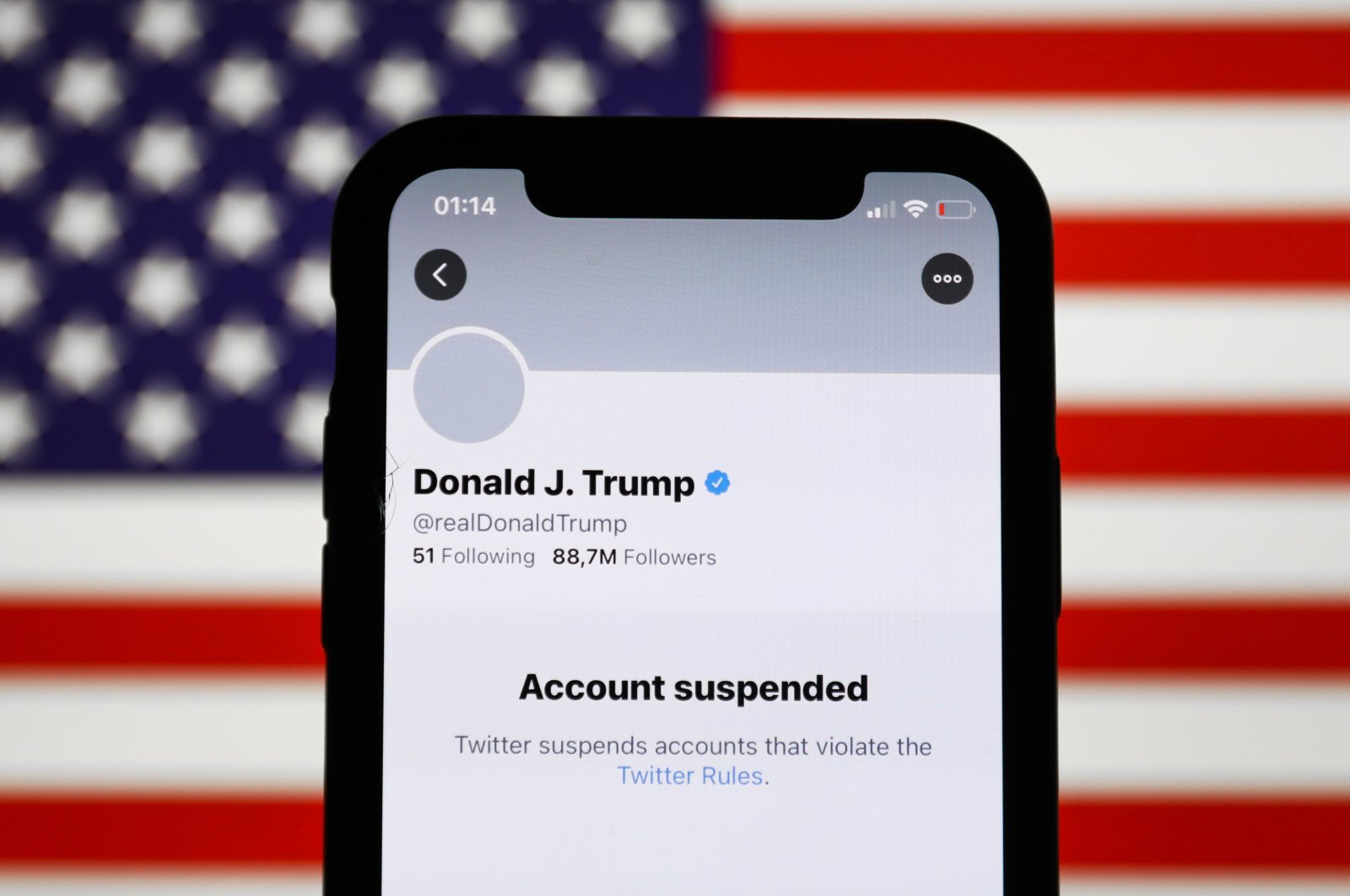 U.S. President Donald Trump's Twitter account displayed on a phone screen and U.S. flag in the background is seen in this illustration, Poland, Jan. 9, 2021. (Photo by Getty Images)
by Merve Şebnem Oruç Jan 13, 2021 12:05 am
RECOMMENDED

Since the first decade of the 21st century, internet applications have gone beyond static content publishers, opening a new era of presentation of information.

Web 2.0, also referred to as social media, brought a new set of technology tools allowing people to interact and providing them with a platform to share their own content.

It was a big development as people would no longer be limited to commenting on the articles published by content providers, they would be self-publishers. Information-sharing was not going to be controlled by news corporations anymore; people were not going to be manipulated by media giants.

People heard about "Occupy Wall Street" protests and Arab Spring via social media. Smartphones and social media platforms helped people around the world to connect, spread the word and tell others their stories. It was a revolution. Finally, ordinary people had found a platform to make themselves heard.

Although the authoritarian states tried to shut down their access to the internet, it did not work out. People thought the social media platforms would provide all of them a fair space to share their ideas. Well, they were wrong.

Turkish people realized that during the Gezi events in Turkey in 2013 which started as a peaceful environmental protest but turned into an attempt to overthrow the democratically elected government of the country.

While anti-government groups became organized and controlled the narrative on social media about the course of events, the traditional global news media, which had already started to dominate the circulation of the news on these platforms, failed to ask what the pro-government people of the country, who did not have time to organize against such a sudden attack, think about the protests.

According to statistics, the fake news circulated on social media about Turkey and translated into other languages was huge. Fetullah Gülen, the leader of the Gülenist Terror Group (FETÖ), ordered the group's members to "double the tweets," showing how powerful social media has become.

It was all good those days for the rest of the world as many states, including the Western allies of Turkey, were eager to get rid of President Recep Tayyip Erdoğan. They ignored the facts and overlooked the upcoming risks of spreading fake news. They realized the danger much later when hate groups and extremists started to organize on social media platforms.

Social media companies started to update their rules and terms to prevent hate speech and extremist propaganda, but it was soon understood that their bans and suspensions of the accounts were arbitrary, and to be honest, selective.

Today, social media companies have billions of users, most of whom only recently started to be concerned about the growing influence of the tech giants, most of which have also become the biggest companies in the world.

People have started to ask whether social media platforms are publishers or platforms. As they increasingly control the content, many people think that they should be regulated by the governments more than they are now.

According to a Pew Research Center survey conducted in July and August, roughly 73% of Americans say they are not too, or at all confident in technology companies to prevent misuse of their platforms to influence the 2020 presidential election, while a majority of U.S. adults (64%), mostly Republicans, say social media has a mostly negative effect on the ways things are going in the country, pointing to several factors, including misinformation, hate and harassment they see on these platforms.

In addition, more than three-quarters of people around the world believe that social media companies have too much power and influence in politics.

As a matter of fact, we witnessed that the people's concerns were true during the 2020 elections. Gatekeeping bias, promoting stories of the party they support and overlooking the other's coverage, or statement bias has become common for the social media platforms. They have almost fought on the lines of their favorite candidates.

We observed that the social media platforms, which are supposed to provide an equal base to divergent viewpoints, censored influential social media users which have objected to their position.

When Twitter started censoring U.S. President Donald Trump's tweets during the election period, it became crystal clear that the social media networks' monopoly was beyond our estimation. If it wasn't Trump, we all would have been outraged by the censorship of anyone, let alone a U.S. president.

Social media companies allowed people to claim "authoritarianism" by Trump; actually, it was more than that, they promoted it. However, such a policy has shown that they are actually a new kind of authoritarian regime. People started to ask: "Will Twitter or Facebook or Google decide who can talk or what can be said?"

If so, we are not free to speak online; we are just allowed to speak within the boundaries defined by these networks. If this is not a dictatorship, then what is? Some can defend the social media companies' policies as a measure to stop the spread of fake news and say that the post-truth era will end with Trump's defeat.

But who is the authority to decide what is true or false and how reliable are social media platforms' fact-checking tools? Are social media companies just platforms with some rules and policies, or are they the judges, policymakers and executive powers of the new world?

Ironically, they did not even think of acting against anti-Muslim hatred on social media before; for instance, they did not delete harassing and insulting tweets against Muslims.

More intriguingly, they did not act to stop Daesh propaganda, which widely used social media during its most dangerous days and made Muslims their scapegoats.

The terrorist organization used these platforms to attract foreign recruits and law enforcement officials criticized social media companies like Facebook and Twitter for not doing enough to stop the spread of terrorist propaganda and not helping them to track them.

I am not even talking about the huge propaganda of the outlawed PKK, which is listed as a terrorist organization in the U.S., the EU and Turkey.

While social media companies do not even lift a finger against the terrorist organization that is a threat to Turkey, I wonder whether they will suspend the official social media accounts of other state leaders in the future, such as the Turkish president. Unfortunately, it looks like they can do anything they want unless they are not regulated.

Not just the Republicans reacted against social media companies' decision to ban Trump, German Chancellor Angela Merkel said the move to permanently suspend Trump's account raises concerns about free speech, although Twitter was right to add warnings to his posts.

Last year, messages began to be given to social media platforms to fit in the rules of the states including the U.S. and the EU. From the issue of personal data protection to free speech, surveillance, or taxation, the social media companies will face more criticism soon, although today they have a pretext for banning Trump on the internet, silencing him for good and making them the winner of the war between the U.S. president and the big tech giants.

But soon, even Brussels, Berlin and Paris will have to make provisions for the sake of their "digital sovereignty" as these companies are dominating their markets and vacuuming up the personal data of their citizens.

Turkey's competition authority has opened an investigation this week into WhatsApp over a new update that requires users to share more data with its parent company, Facebook.

As Europe challenged Facebook's behavior as well as other big tech companies, the ordinary users in Europe will not see any changes to their data privacy terms to use the messaging app.

The exemption has been welcomed in the bloc as a victory for EU privacy regulators and yet it is a big win.

The fight for digital sovereignty is just beginning and it will be the next struggle of the near future. There will be a clash between tech companies, which design, produce, control and sell digital products and the states, which have the power to regulate it by determining what is legal or not, who will set the rules and have the control, etc.

Although the fight between the states and the big corporates is old, this one will also be a matter for everybody as social media is an undeniable part of our daily lives. And it will be very complicated since it will be a part of the current international conflicts.