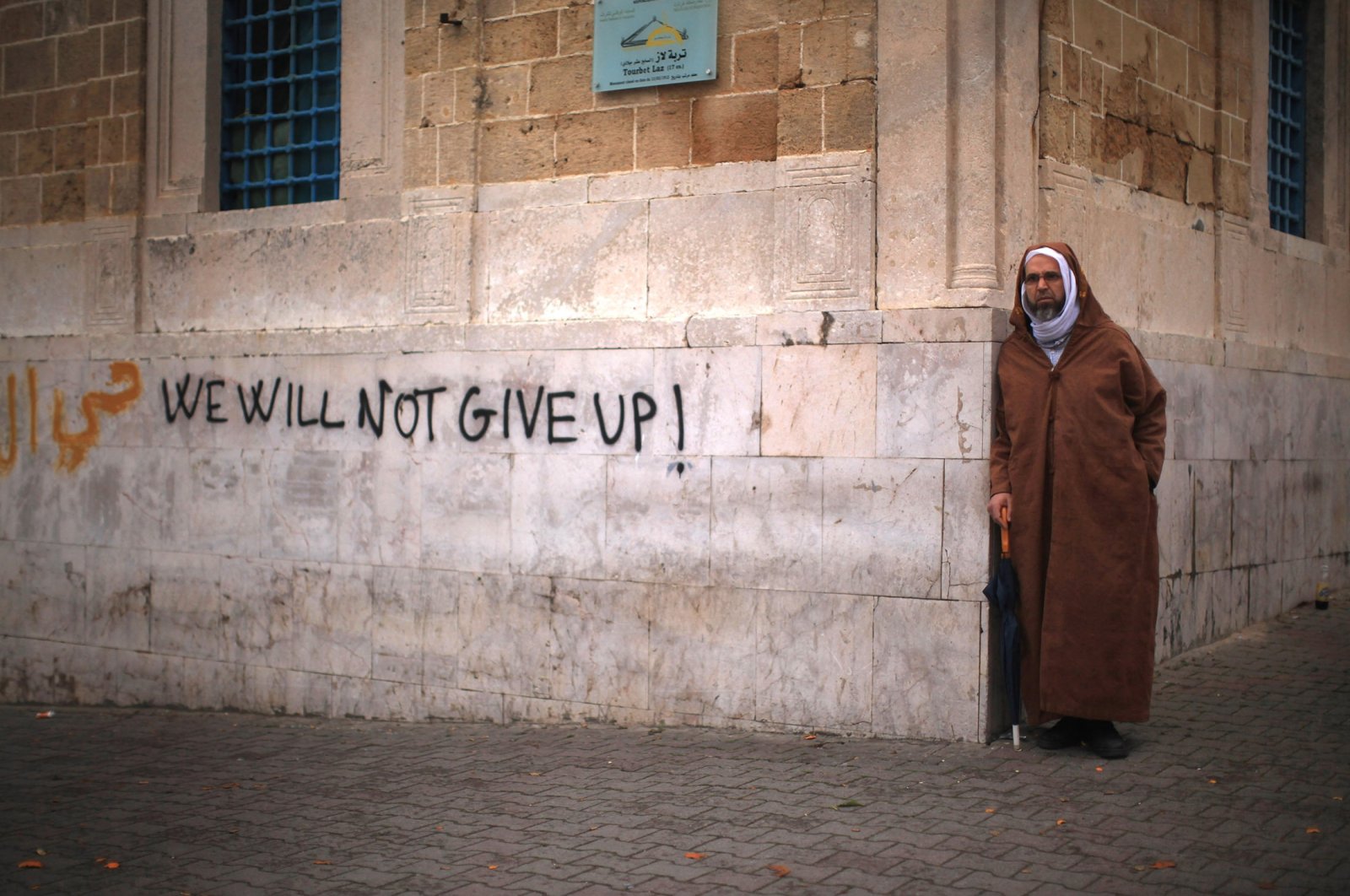 A Tunisian man looks on next to graffiti as protestors continue their demonstrations outside then-Prime Minister Mohammed Ghannouchi's offices in Tunis, Tunisia, Jan. 25, 2011. (Photo by Getty Images)
by Hakkı Öcal
Aug 02, 2021 12:05 am

We have to admit Turkish society was also one of those flawed societies that had been producing flawed constitutions since 1908.

Despite the fact that the society has been gradually shedding its flaws, we still have a flawed constitution: an eclectic text, patched and pieced together since its adoption in 1982 by a large margin of 91% “Yes” votes against 9% “No." It was approved because its adoption was the only way to get rid of the military junta that was holding the civilian leaders hostage in a military camp.

Tunis, Egypt, Libya, Syria, Iraq and several other countries passed through the same processes that brought Turkey to the situation it was in during the turn of the century: The Darwin Revolution was at its peak; Nietzsche was dead, but his yodelayheehoo about God being dead was still fresh and resonating.

The Islamic scholars in those countries had already severed their links to science almost a hundred years ago; they were not providing the right solutions to the crisis emanating from that cultural clash.

Like all people who could not find the right solution to their existential questions, those societies were divided in half: secularist-positivist-Darwinist modernism versus traditionalism based on values arising from various belief systems. (I am consciously refraining from the term “Islamism” for several reasons that I think are not relevant to the issue at hand.)

The turn of the century was also a renewal time for colonialism that, in its resurrection, acted more subtly (that is, scientifically), opening schools, exporting excavating and drilling machines and agricultural harvesters instead of armies. The military power for this “modernization” (read: neo-colonialism) would be provided by the local elite, trained and educated in those secular-modern schools by positivist teachers.

The new modernist cadres, less in numbers but closer to the power centers than the larger masses who were not heavily occupied with societal problems, designed the constitutions and laws as they believed they should be – based on European values.

Yet, they knew the other half very well; they never trusted their traditional brethren whom they thought still espoused traditional values, upholding strong distrust of western lifestyles.

Even a cursory survey of popular literature in these “developing traditional Islamic countries of the Near East” would display the deep bifurcation in their value systems: the European-educated urban elite, rich and famous with their modern lifestyles versus the enemies of modernism lurking in the dark, waiting to ambush the new regime as soon as it faltered.

So, they put “precautionary measures” in their new and modern constitution. Examples include Article 47 of the 1877 Ottoman Constitution, Article 80 of the 2014 Tunisian Constitution and many others in between.

The elite thought these precautionary measures would be employed in case the “obscurantist” counterrevolutionary masses gain, for instance, the majority in parliament. The modernist secular-positivist urban elite would be using these extraordinary powers to protect the democratic system.

The only problem seemed to be that the modernizing elite resorted to these powers whenever they had problems with the economy or they could not meet the developmental demands of the masses such as providing enough jobs or ensuring national defense against ambitious neighbors.

Sometimes, the central elite benefited from the support of their benefactors France, Britain or Italy; the compromises the elite gave to them angered the nationalist sentiments of the masses.

At times, the rival European powers purposefully created rivalries within the elites. In the words of the famous United States Secretary of State John Foster Dulles, “our bastards in their fight with their bastards” had to evoke those extraordinary measures.

The Ottoman elite did it in 1908 and the Republican Turkish elite did it in 1960, 1970, and 1980 in collation with the Turkish Armed Forces (TSK). But in 1997, they did not intervene with a military coup but instead threatened the ruling coalition government with military intervention.

The government resigned and hand-picked parties formed a new coalition and implemented the demands of the military. In 2016, there was yet another coup bid but it was totally of a different nature, being organized by a religious cult but abusing the same flawed legal circumstances.

Tunis and the Arab Spring

In Tunis, after the uprisings that started the Arab Spring, it took three long years to create what they called “the Tunisian National Dialogue Quartet,” a group of four civil society organizations that were central mediators in the effort to consolidate democratic gains and to form a lasting constitutional settlement in the country.

Yet, the unrest and historic regime change of the 2011 Jasmine Revolution brought the modernizing central urban (usually called the “coastal’) elite and traditional elite eyeball-to-eyeball at the time to write the constitution.

The Quartet's success in bringing the Ennahda-led government to negotiations was indeed historic and worthy of the 2015 Nobel Peace Prize because it convinced the organizer of the popular revolution, the Ennahda Movement, to agree with the ropes that could be used as the hangman's noose: The article that President Kais Saied, a constitutional law professor, used was one of them.

The 2014 Tunisian Constitution was a flawed text because the society was flawed. One major mistake with it was the existence of the “political tutelage,” which is always based on the notion that the elite needs “precautionary measures” if the political representatives of the masses overstep their limits.

The Tunisian National Dialogue Quartet seriously compromised the democratic future of the country by allowing a tutelary regime that, as was the case last week, intervened and stopped the democratic game.

Turkey, starting in 2002, began a process to heal societal flaws. The deep dichotomy of the “modernizing elite” and “traditional masses” has been largely erased and it is time to write a constitution that is not burdened with the “nooses of a tutelary regime.”

Iraq, Afghanistan and Syria are not out of the woods yet. Libya is trying to recover from a civil war that was in a sense the extreme version of that intra-elite struggle within the tutelary system. If only they could find a solution to the trials and tribulations that modernization brought two decades ago ... If only their patrons in modernization could leave them alone in their own struggle for social development.

Neo-colonialism’s bastard child, financial-capitalist imperialism, would not leave these countries alone! Their hands are even today still in the soft underbelly of Turkish democracy, as was the case in July 15 coup-bid.