From initiative to partnership: Turkey-Africa ties 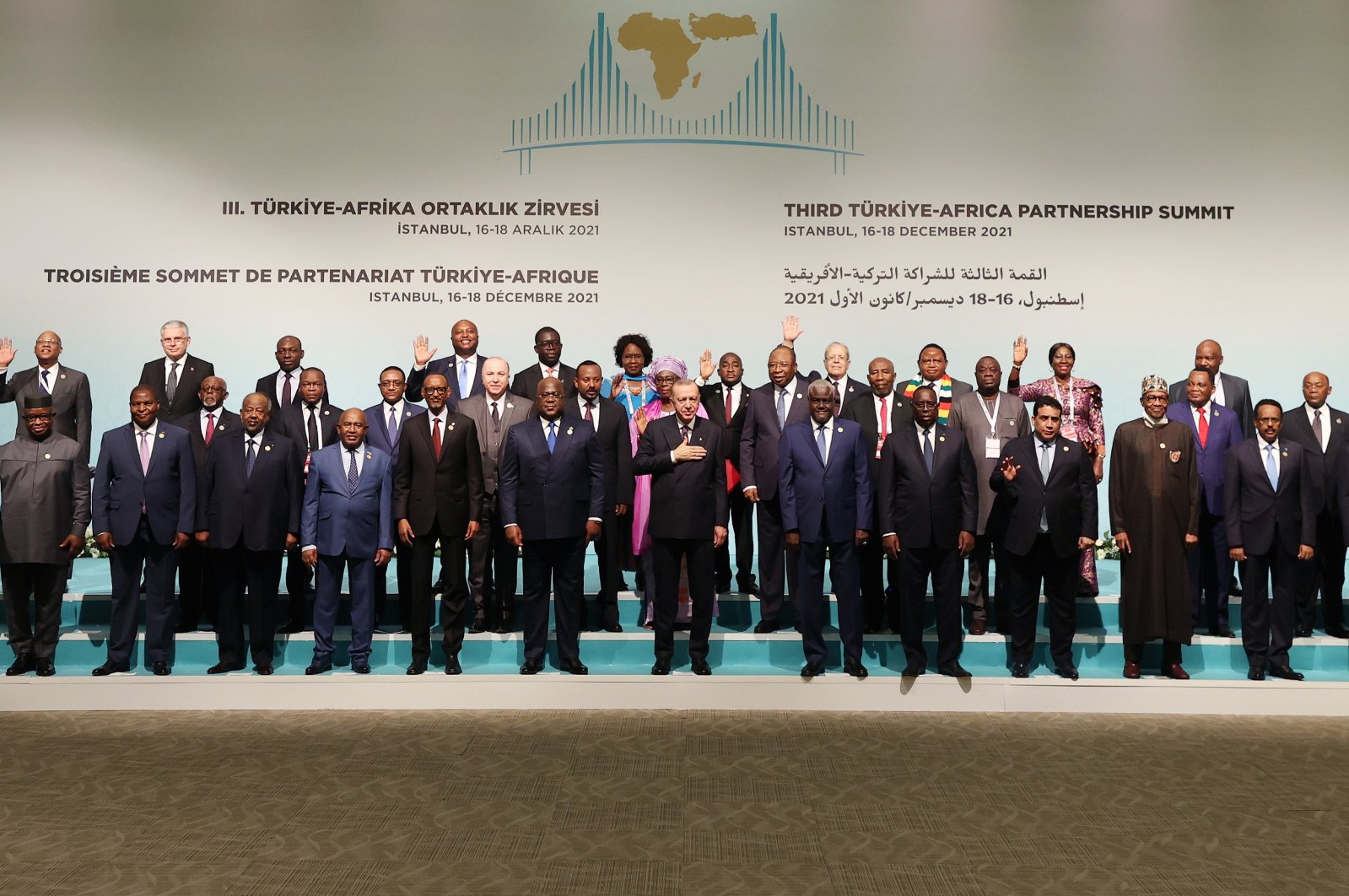 President Recep Tayyip Erdoğan (C) and leaders of the African nations pose for a family photo during the 3rd Turkey-Africa Partnership Summit in Istanbul, Turkey, Dec. 18, 2021. (AA Photo)
by Burhanettin Duran Dec 20, 2021 12:05 am

Through cooperation based on mutual trust and shared strategies, Turkey and Africa are taking firm steps forward in bilateral relations

Turkey’s vision for Africa leaps forward every passing year. The 3rd Turkey-Africa Partnership Summit ended with a working lunch of heads of state and government. The event, which promoted an “Enhanced Partnership for Common Development and Prosperity,” manifested the extraordinary level that Turkey’s relationship with the continent has reached. The Africa initiative, which started in 2005 and gained momentum four years later, has evolved into a strategic partnership.

Only 13 years have passed since the African Union (AU) designated Turkey a “strategic partner.” There are currently 43 Turkish embassies and 19 military attaches on the continent. Turkish Airlines (THY) flies to 61 destinations there while the Turkish Cooperation and Coordination Agency (TIKA) has 22 local offices. The Maarif Foundation operates 175 schools in 26 countries, and the Presidency of Turks Abroad and Related Communities (YTB) provides scholarships to over 5,000 students. Let us also keep in mind the ever-growing investments of Turkey’s business community in Africa.

Thus President Recep Tayyip Erdoğan reaped the benefits of his trips to 30 African nations, to which he attached special importance, at Dolmabahçe Palace in Istanbul over the weekend. The leaders reviewed their five-year plan. Despite the pandemic, 102 African ministers, including 26 foreign ministers, attended the summit alongside 16 heads of state or government – a strong show of mutual trust and cooperation.

Africa, which was associated with poverty, civil wars and migration in the past, is one of the world’s up-and-coming regions in the 21st century. Seven out of the world’s 10 fastest growing economies are there. That development accounts for the strong interest from leading nations. China, Russia, European Union members (starting with France), the United Arab Emirates (UAE), Saudi Arabia and India have a strong presence in Africa together with Turkey. Yet Turkey’s vision for Africa represents an “alternative” to the current practices of former and new colonial powers.

Western nations are charged with sticking to their old colonialist ways. For example, France cannot get rid of its shameful baggage. Meanwhile, experts warn that China sets a “debt trap” in the name of economic development. Russia’s role as a “provider of security,” in turn, is a source of concern due to the Wagner Group’s expansion in Africa. Consequently, Turkey’s vision, which originated in humanitarian aid and rests firmly on the principles of equality, mutual benefits and “winning together,” attracts more and more interest.

That vision reflects Turkey’s commitment to see Africa from an African perspective and to promote mutual development. The partnership has already reached key areas like infrastructure, agriculture, health care, telecommunications and defense. It also includes technology transfers and the modernization of national armies. Additionally, the spectacular performance of Turkish armed drones in Libya, Syria and Nagorno-Karabakh has been admired by African leaders. In addition to Morocco and Tunisia, the governments of Ethiopia and Angola are currently interested in purchasing Turkish drones.

In this regard, Turkey plays an active role in Africa from the standpoints of economic development, security, humanitarian assistance and cultural friendship. It serves two purposes – namely development and security – a role prominent players have traditionally played there, simultaneously. At the same time, Turkey intends to increase its trade volume with the continent from $25 billion (TL 410.46 billion) to $50 billion and, possibly, $75 billion over the next years. Keeping in mind that Africa’s trade volume amounts to $190 billion with China and $50 billion with Germany, however, there are many steps that Turkey’s partnership with African nations still has to take. It goes without saying that Turkey needs to make new and significant investments in its human capital, such as training academic experts in order to develop different strategies for each nation.

In an interview with Turkey’s first lady, Emine Erdoğan, for Kriter magazine’s December issue on her new book on Africa, I had the opportunity to learn more about her experiences with the continent as “a mother and a woman.” Some of her remarks have been etched in my memory: “You cannot be just unless you think of humanity as your family.” “The hearts of mothers beat with a universal rhythm.” Finally: “We see Africa’s accomplishments and happiness as our own accomplishments and happiness. Our relations with Africa go down in world history as a beautiful example of humanity.”