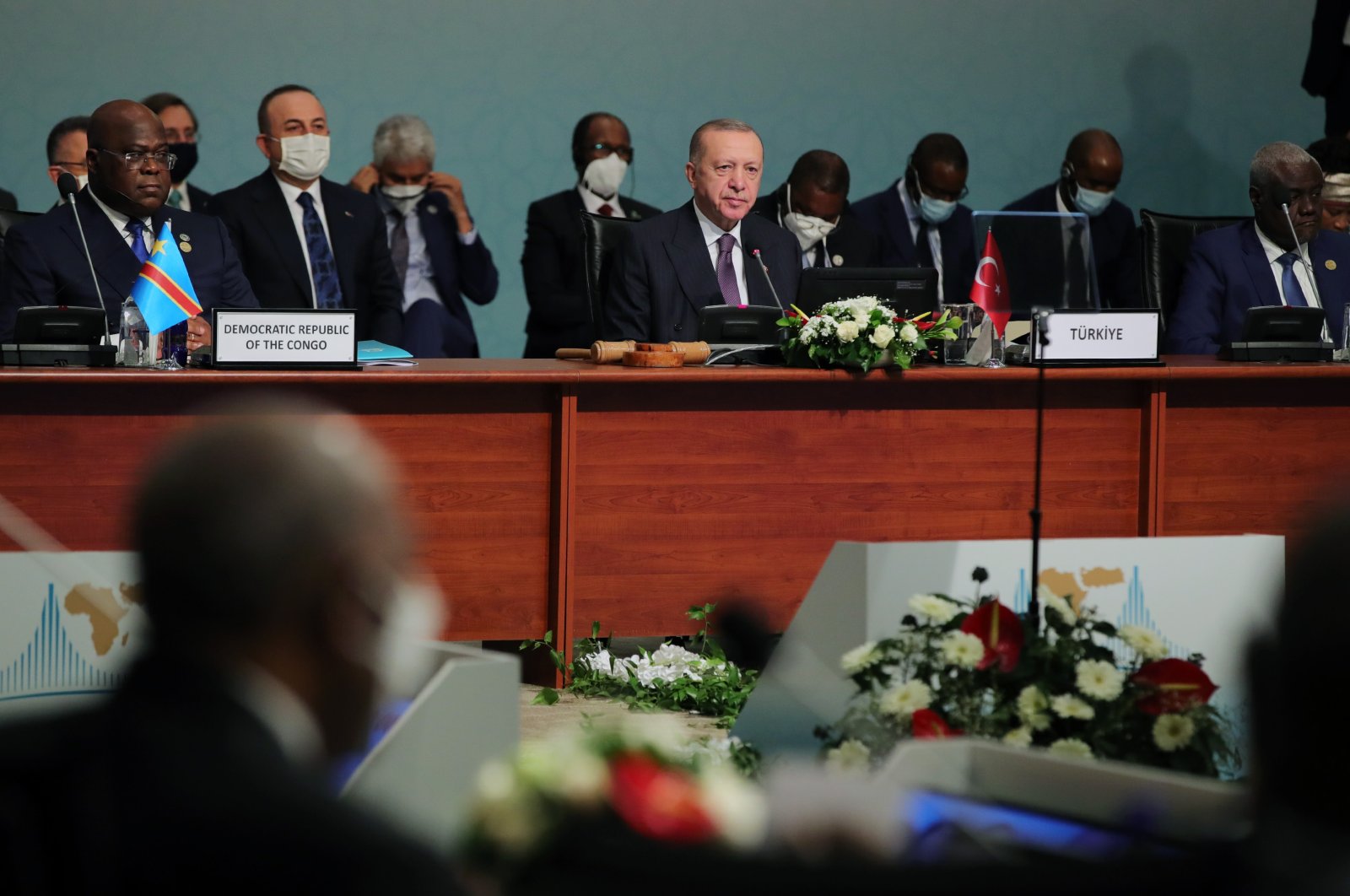 Attended by at least 100 African ministers and heads of states, the Third Turkey-Africa Partnership Summit ended with a pledge to strengthen cooperation in several fields and with an eye to the next gathering to take place in 2026

It is a "great injustice" that the African continent, with its population of 1.3 billion, is not represented in the U.N. Security Council, President Recep Tayyip Erdoğan said Saturday, stressing that representation of Africa in the Security Council is a must.

During his speech at the third Turkey-Africa Partnership Summit in the Turkish metropolis Istanbul, Erdoğan referenced his slogan "the world is bigger than five" – coined to protest the unrepresentative setup of the U.N. Security Council – and said that Turkey's efforts were also meant for its brothers and sisters in Africa.

Over 100 government ministers and 16 presidents from Africa attended the summit that was held under the theme "Enhanced Partnership for Common Development and Prosperity."

"I believe that we need to join forces so that Africa can be represented in the Security Council, as it deserves," he added.

Underlining that it was a disgrace for humanity that only 6% of Africa's population has been vaccinated against COVID-19, Erdoğan noted: "Turkey plans to send 15 million vaccine doses to Africa."

Ankara has invested heavily in developing trade and diplomatic ties with the continent during Erdoğan's rule as prime minister and then president since 2003.

"We are aware of the global injustice in accessing the COVID-19 vaccine and Africa's unjust treatment," Erdoğan said.

Turkey is developing its own vaccine, known as Turkovac, which is in the process of receiving emergency use approval.

Following any authorization, it will be shared with Africa, Erdoğan said.

Erdoğan said Turkey wanted to strengthen relations with Africa in a wide range of areas including health, defense, energy, agriculture and technology.

"The real potential between us goes far beyond the targets we have," he said.

Turkey has set an even higher target of trade volume for the future: $75 billion.

Noting that Turkish companies in Africa are providing employment to approximately 25,000 people, he said the country's contracting firms "have signed 1,686 projects with a total value of up to $78 billion across Africa."

Underlining that cooperation between Turkey and Africa is based on mutual benefit, he stressed that Ankara rejects "clumsy and orientalist" views regarding the continent.

The next Turkey-Africa summit will be held in 2026 in an unspecified African country.

Cooperation in other fields has also been on the rise, Erdoğan highlighted, with 43 Turkish embassies currently serving in Africa – up from 12 in 2005.

The number of African embassies in the capital Ankara also rose to 37 from 10, he added.

"We expanded our presence across the continent with our institutions such as TIKA (Turkish Cooperation and Coordination Agency), Yunus Emre Institute, Maarif Foundation, Anadolu Agency, Turkish Airlines and the Red Crescent," he said.

He also stressed that Turkey's flag carrier Turkish Airlines helps connect the continent and the world, and added that after the pandemic it would likely boost its flights with Africa.

In a final declaration, Turkey and African countries agreed to strengthen cooperation in several fields, including health "through further health sector investments."

"With the declaration we have accepted at this summit and the joint action plan, we agreed on a road map to deepen our relations," Erdoğan told a closing media event.

These sub-themes will be implemented under five strategic cooperation areas through a joint action plan from 2022 to 2026: "Peace, Security and Governance," "Trade, Investment and Industry," "Education, Science-Technology-Innovation skills, Youth and Women Development," "Infrastructure Development and Agriculture" and "Promoting Resilient Health Systems."

The summit decided to establish appropriate follow-up mechanisms for monitoring and evaluation of agreed areas of cooperation.

A memorandum of understanding on cooperation was also signed between Turkey and the Secretariat of the African Continental Free Trade Area.

Mentioning the security issues present on the continent, Erdoğan said that, as a country that has been fighting separatist terrorism for nearly 40 years, Turkey is well aware of the security challenges Africa faces.

Organizations such as Boko Haram, Al-Shabaab and Daesh are not just a problem for a few countries. They are the common enemy of everyone," he said.

"There is no distinction between FETÖ and the PKK and these terrorist organizations that take the lives of innocent Africans," he added, referring to the Gülenist Terror Group, which orchestrated a failed coup attempt in 2016.

"We are ready to offer Turkey's advanced-technology defense industry products and the experience gained in the fight against terrorism to the benefit of our African friends," said Erdoğan.

He also expressed his thanks to African countries that supported Turkey's fight against FETÖ by banning the activities of the organization and closing or transferring its educational institutions to Turkey's Maarif Foundation.