How did America not hear about the coup in Tunisia? 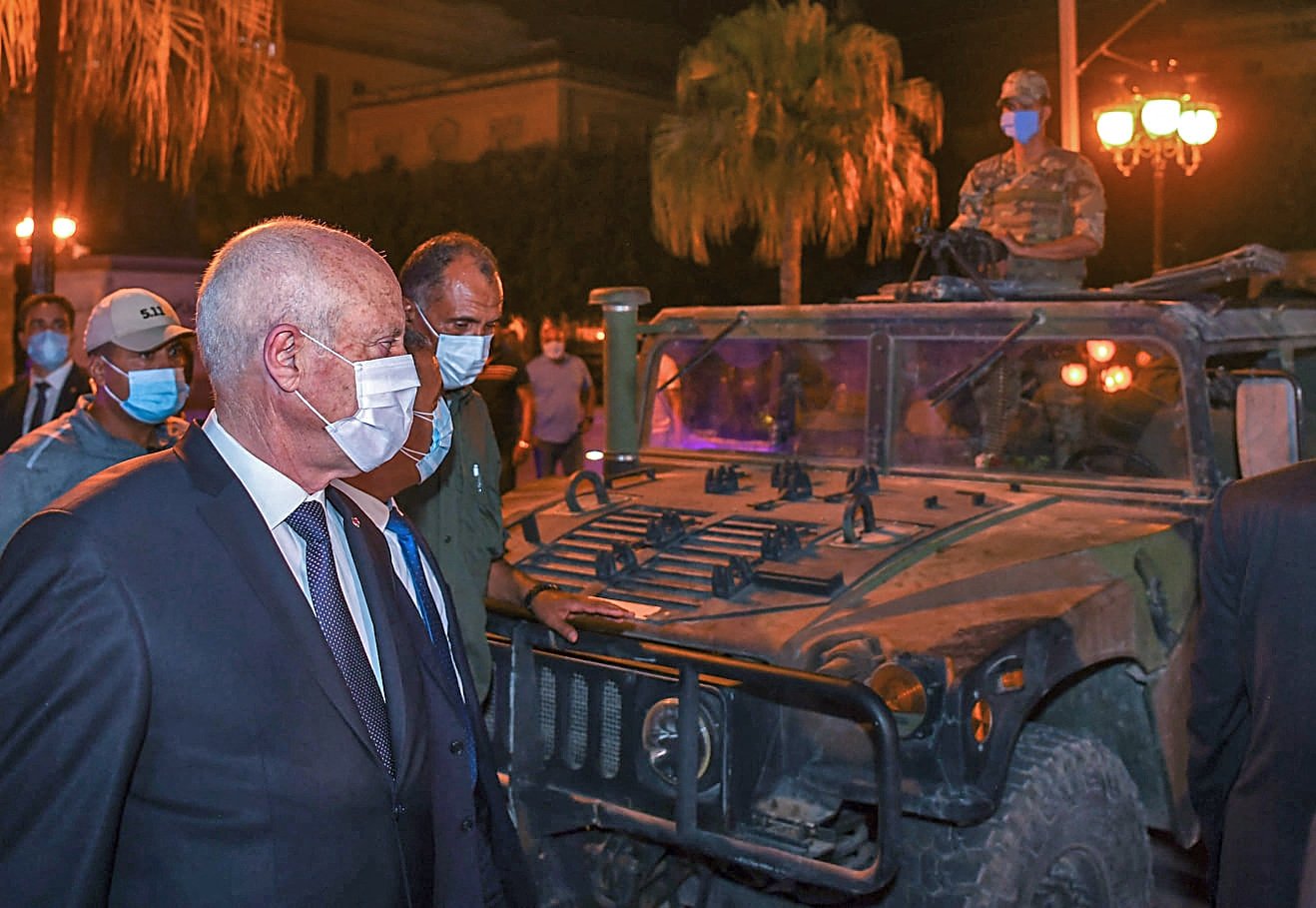 Tunisian President Kais Saied walking past a military vehicle in Tunis's central Habib Bourguiba Avenue, after he ousted the prime minister and ordered the parliament closed for 30 days, in the capital Tunis, Tunisia, on July 26, 2021. (AFP Photo)
by Melih Altınok Jul 29, 2021 12:05 am

Although the developments that have been called a coup in Tunisia were mentioned in many open sources, America still ignored the warning signs

Tunisian President Kais Saied has removed the country's prime minister, Hichem Mechichi, dismissed the government and suspended the parliament and immunity of its members. Then, he dismissed Defense Minister Brahim Bartagi and Interior Minister Taoufik Charfeddine, and soldiers did not allow Rached Ghannouchi to enter the Parliament.

Saied says he intervened on the basis of Article 80 of the constitution. However, it is clear that the act of dismissing elected politicians with the force of the army and closing the parliament would be named a coup d'etat throughout the world.

Such an event can only happen in monarchies, not in a republic where the government is established by popular vote. Moreover, everyone following the region is aware that when attempting the coup, Saied had strong support from outside the country.

The pillars of this support are none other than Egypt and the United Arab Emirates (UAE), which congratulated the coup in Tunisia. This was met with backlash from many countries, including Turkey.

Those who dominate the balance of power in North Africa know that Saied could not have decided to do this job on his own. It is said that the coup was planned during Saied's visit to Cairo last April, during his contacts with Egypt's putschist leader Abdel Fattah el-Sissi.

The point on which commentators agree is that Egypt, which has taken the UAE with it, supports such a development primarily to weaken Turkey's hand in Libya.

Footsteps of the coup

More was revealed when the news website Middle East Eye, broadcasting from the U.K., published a piece on May 23 detailing Saied's preparations.

The website disclosed a document dated May 13 with a "top secret" record on it, leaked from the office of Nadia Akacha, Saied's closest aide in the Presidential Palace in Carthage. The document clearly explains that Saied will use the excuse of the COVID-19 pandemic and unrest caused by economic difficulties.

Tunisia denied the Middle East Eye's report. They claimed that the document was not genuine and that Saied was bound by all the rules and institutions of democracy.

However, exactly two months after the publication, everything written in the document became true, even the people who were announced to be appointed after the coup.

In light of information that has been in the press and open sources for months, the United States statement about Tunisia, which can be summed up as "confused," is simply funny.

White House Spokesperson Jen Psaki, who stated that they are worried about the developments in Tunisia, has said that they have not yet been able to determine whether what happened in Tunisia is a coup or not.

It is obvious that they do not want to loosen the rope of Saied, who tramples the law in his country even though he is a lawyer.

But Saied should not worry too much. Even if the U.S. calls the events a coup, it will be OK, because the U.S. never has a problem with putschists.

Look, although they call what happened in Turkey on July 15, 2016, a coup, the U.S. continues to host the Gülenist Terrorist Group (FETÖ), who attempted this coup with backing from the UAE. They will not even allow them to be judged.

I believe that the Tunisian people will be able to get over these difficult days as soon as possible and continue on their journey to democracy where they left off. Our hearts are with them.