How Greece can win in the Eastern Mediterranean 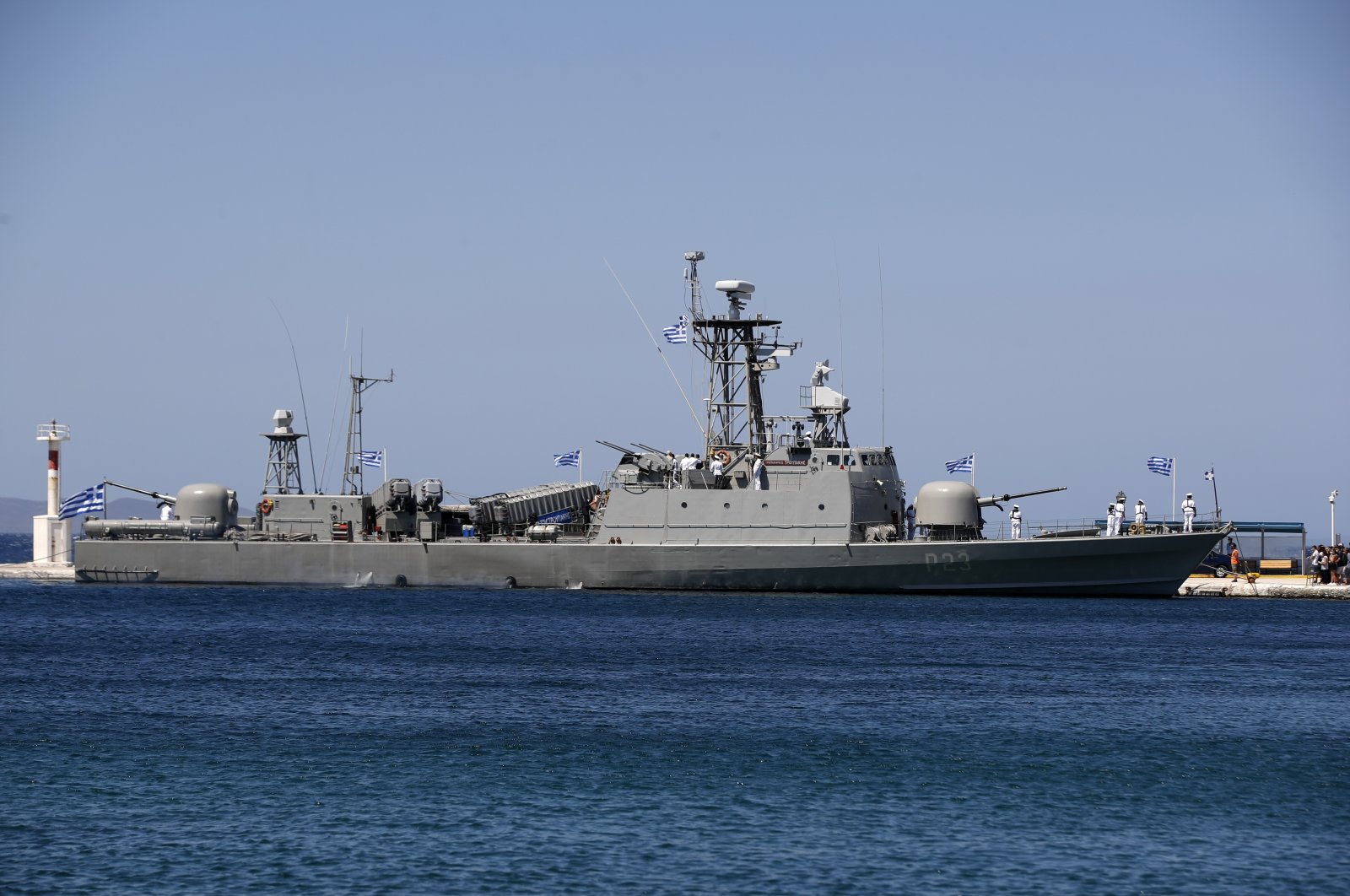 A Greek naval ship is docked at the port during the Assumption of the Virgin Mary service at the Holy Church of Panagia of Tinos on the Aegean island of Tinos, Greece, Aug. 15, 2020. (AP Photo)
by Yahya Bostan Aug 17, 2020 12:05 am
RECOMMENDED

There are two sources of tension in the Eastern Mediterranean that Turkey watches closely: the situation in Libya and the escalation with Greece over exclusive economic zones (EEZ). Obviously, those two tensions are completely intertwined and inseparable parts of the same puzzle.

But first, a quick refresher: Turkey reacted strongly to an attempt by Greece and the Greek Cypriots to imprison it in a small part of the Mediterranean and to drill for petroleum and natural gas within Turkey’s and the Turkish Cypriots’ maritime jurisdiction. Turkey responded to that attempt by signing a memorandum of understanding with Libya regarding the two nations’ respective maritime jurisdictions. That agreement resulted in Turkey taking its place in an area, which Greece and the Greek Cypriots claimed to control, and became involved in the Libyan conflict. The Turkish-Libyan deal entailed a request for assistance from the latter’s legitimate government, as Turkey began to support Libyan troops against putschist Gen. Khalifa Haftar.

As a result of that move, the center of tensions moved from the Mediterranean to Libya, where countries like Russia, Egypt and the United Arab Emirates (UAE) were already in Haftar’s corner. Seeking to deprive Turkey of its rights in the Mediterranean, Greece and France, too, jumped on the Haftar bandwagon in an attempt to bring down the Libyan government and void the Turkish-Libyan agreement. Just as Tripoli was about to fall, a Turkish-backed counter-offensive deprived Haftar of his strategic superiority and forced him to withdraw. Although France tried to get NATO and the European Union involved to weaken Turkey’s position, it did not get what it wanted. A one-sided arms embargo, too, proved ineffective, as it did not actually apply to weapons being delivered to Haftar’s forces. Finally, the Turkish-backed Libyan forces ended up in the outskirts of Sirte, a strategically important city. There is currently an attempt to resolve the Libyan dispute through diplomacy. Yet France, Greece and others are now aware that Haftar won’t be able to topple Libya’s legitimate government and that the Turkish-Libyan agreement is rock solid.

In light of the Libyan government’s consolidation, Turkey turned its attention back to the Mediterranean, where Greece and the Greek Cypriots remain active. To defend Turkish rights, Ankara dispatched a seismic research vessel Oruç Reis to the contested area. Although tensions escalated due to the Greek reaction to that move, German Chancellor Angela Merkel quickly stepped in to broker a 30-day pause and exploratory talks between Turkey and Greece. The Turkish government responded positively to Merkel’s request to play a constructive role.

Tensions de-escalated in the region following that verbal agreement, but the announcement of a Greek-Egyptian EEZ agreement fueled tensions anew. Believing Greece to have acted in bad faith, Turkey did not participate in exploratory talks with Greece, which were supposed to take place last week. It is important to recall Foreign Minister Mevlüt Çavuşoğlu’s message that “Greece did not appreciate our gesture.” Turkey thus resumed its seismic research activities, which had been temporarily suspended at Germany’s request. Accompanied by navy ships, submarines and air cover, the Oruç Reis returned to the Mediterranean. Turkey also turned down a German offer to “lift pandemic-related travel restrictions” in return for de-escalation.

Here’s the really important bit: Greece describes its dispute with Turkey in a belligerent language due to domestic political turmoil, economic problems and rising nationalism. Yet it lacks the military, economic and political capabilities necessary to confront Turkey. Most recently, a Greek frigate suffered damage and was forced to withdraw as it attempted to intercept the Oruç Reis. In light of those facts, Greece seeks to mobilize international support against Turkey and, in particular, use the European Union to threaten the Turks.

As Germany plays the "good cop" in the Mediterranean dispute, France and Greece are on the same side there. French President Emmanuel Macron both targeted Turkey in his public statements and deployed the French Navy to the region for a joint military exercise with Greece. Needless to say, none of those moves were enough to change Turkey’s mind.

Athens needs to understand the following: Neither France nor any other country has the slightest interest in confronting Turkey militarily. There will never be such escalation. Turkey won’t just stop defending its rights in the Mediterranean either. So, what is to be done?

The answer is actually quite simple. Greece will keep playing a losing game, as long as it tries to address its problems with Turkey through third parties and faits accomplis. That is exactly what happened in the Libyan theater. Ironically, Ankara keeps stressing that it does not seek to deprive any country of anything that is rightfully theirs – that it desired a fair distribution of resources and territory.

It would be easier for Greece to discuss the situation in the Mediterranean with President Recep Tayyip Erdoğan, rather than French President Emmanuel Macron. Simply having dialogue will be enough, so long as Greece is willing to accept a sensible and fair solution.