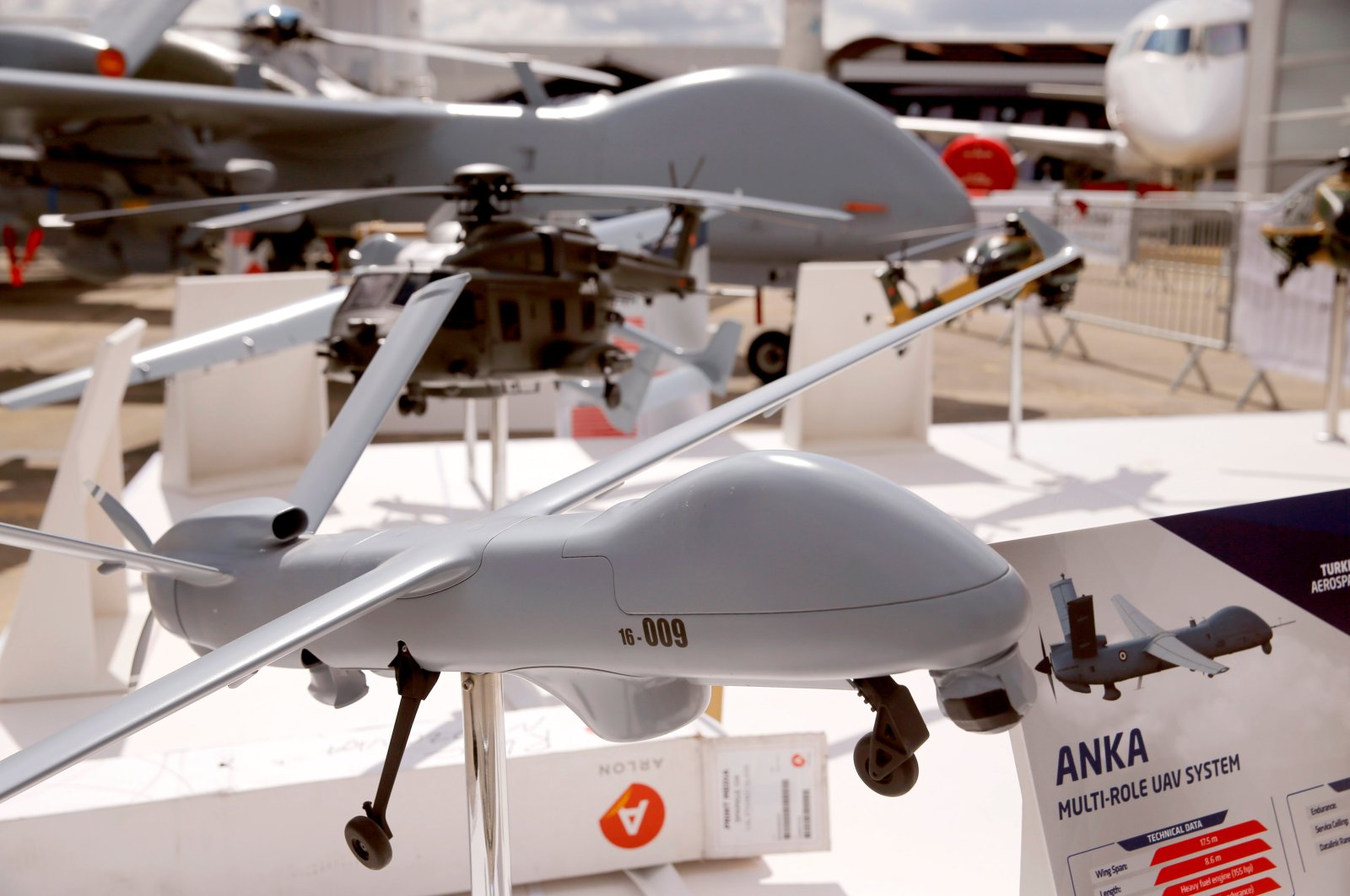 A model of Turkey's multi-role unmanned aerial vehicle ANKA on static display, on the eve of the opening of the 53rd International Paris Air Show at Le Bourget Airport near Paris, France, June 16, 2019. (Reuters Photo)
by Merve Şebnem Oruç Sep 19, 2020 12:05 am
RECOMMENDED

Following Turkish drones’ hunt for the Syrian regime’s Russian-made air defense systems, the Pantsir S1 (or SA-22 Greyhound), during the Idlib campaign in February, and following the destruction of around nine Pantsir air defense systems at the hands of Turkey’s unmanned aerial vehicles (UAVs) in Libya during Ankara's May intervention in the country, the advancement of the country’s defense industry has garnered greater attention in the international arena.

In fact, Turkey has gained the attention of various experts, who ponder if Turkey might have become the Middle East’s drone superpower.

You probably might agree with this already, but the country, which continues to make investments in its growing military sector, has set its sights on yet greater ambitions. Today, some even argue that Turkey now rivals the U.S. and the U.K. as the world’s most prolific user of killer drones.

Most recently, professor Ismail Demir, the president of Defense Industries of the Republic of Turkey, tweeted that the company's Aksungur UAV, manufactured by Turkish Aerospace Industries (TAI) has gained new capabilities.

The Teber, produced by ROKETSAN, is a 2.6-meter-long (8.5 feet) laser guidance kit that weighs 270 kilograms (595 pounds). Converting bombs into precision smart weapons using Inertial Navigation System (INS), Global Positioning System (GPS) and Semi-Active Laser (SAL), the device can successfully hit a target at a range of 28 kilometers (17 miles), releasing a bomb at an altitude of 12 kilometers.

Using existing technology from the TAI Anka, a Turkish medium-altitude long-endurance (MALE) drone, the TAI Aksungur, which is 12 meters long and 3 meters high when resting on its landing gear, is the manufacturer’s largest drone with a payload capacity for mission-specific equipment. After recent tests, the Aksungur became the first Turkish UAV to be able to deliver 227 kilograms of ammunition with an 89-kilogram warhead fired using laser guidance.

Meanwhile, the Akıncı high-altitude long-endurance combat drones developed by Turkey’s Baykar Defense Company will also be integrated with the Teber 81-82, according to Demir, while both the Aksungur and Akıncı are expected to use HGK Precision Guidance Kits developed by the TÜBİTAK Defense Industries Research and Development Institute (SAGE), turning the existing 900-kilogram MK-84 general-purpose and penetrator bombs into air-to-ground smart bombs.

Previously, the MAM-C-high explosive and MAM-L-thermobaric variants of MAM, a laser-guided smart munition system produced by ROKETSAN for UAVs, light attack aircraft and air-ground missions for a low payload capacity were used by the Bayraktar TB-2, a MALE unmanned combat aerial vehicle (UCAV), as well as Anka UAVs. With the latest tests, larger UAVs will be able to carry heavier ammunition, creating a whole new concept for Turkish air operations.

While sophisticated military drones are a sign of Turkey’s rising ambitions, there have also been new developments in Turkey’s land systems. ROKETSAN recently integrated its TRG-230 surface-to-surface missile with a laser-seeker head and conducted a successful test on its new laser-guided missile system, the TRLG-230, aimed at a reflected laser beam. The target was indicated by the Bayraktar TB2 UAV.

In July, ROKETSAN announced that it had put into use TRG-230 missiles with a range of 70 kilometers, a precise version of the 230-millimeter (9-inch) TR-230 missile, which is guided using GPS/INS navigation and can be launched from ROKETSAN’s Tiger Multi Barrel Rocket Launcher (MBRL) Weapon System, Multi-Caliber Launcher (MCL) Artillery Weapon System as well as other platforms with compatible interfaces. Following this, on Aug. 30, ROKETSAN released recordings and information on the test of a new version of the 230-millimeter-caliber missile, the TRLG-230, which can hit moving targets from the ground, increasing its precision via marked by UAVs and UCAVs.

Technical analyses are complicated, of course, but the new generation TRLG-230 missile’s hitting the target marked by a UAV (even though the area of use of the missile is limited with the range) and the Aksungur UAV’s delivering combat load of fighter jets to address Teber’s laser guidance have turned Turkish drones into combat aircraft, according to experts. Both have made a significant contribution to Turkey’s air force’s impact in terms of increasing ammunition-carrying capacity and precision.

Once reliant on weapons supplied by its NATO allies, especially the U.S. and Germany, Turkey today knows that it cannot be a regional power without a deterrent military force and that it cannot maintain its independence without a defense industry.

Over the last decade, Turkey has spent billions of dollars developing its defense sector to grow its self-sufficiency in military matters in the face of its weapon-supplying allies’ unfriendly policies.

NATO allies of Turkey have traditionally chosen to put Turkey into a tight corner, threatening it with imposing sanctions as well as prohibiting arms sales. However, what doesn’t kill you only makes you stronger. The Turkish local defense industry has now already met 70% of the country's military requirements, up from 20% 15 years ago.

In addition, Turkey is not only taking steps to produce its own military needs but is also boosting sales to other countries. For instance, many countries needing armored vehicles to face new threats, such as improvised explosive devices (IEDs), look to Turkey. According to reports, Turkey in 2019 ranked 14th among the world’s top arms exporters.

Turkey’s national warship program, the MİLGEM project, has accelerated the development of the industry in the areas of sea platform design, construction and technological capabilities. Local industry is also responsible for modernizing the Turkish naval forces’ system, and it actively takes part in naval modernization programs of allied nations. The Hisar air defense and SOM cruise missiles, as well as Fırtınahowitzers, are just some of the outstanding examples of Turkish defense industries’ products.

Turkey has increased its defense projects to almost 700 today while it had only 66 in 2002. Around 350 new projects have been launched since 2015. The budget for defense projects in Turkey was about $5.5 billion in 2002, while today, this has risen to $60 billion. If ongoing tender processes are included, the country’s defense project budget has now surpassed $75 billion.

In this era, Turkey has started to focus on research and development (R&D) as well. While R&D spending was only $50 million in 2002, it increased to $1.5 billion last year. Four years ago, there were only two Turkish companies among the world’s top defense companies, today there are seven.

Of course, there is a long way to go and emerging threats of today’s world make it mandatory to develop next-generation military solutions. Nonetheless, it looks like Ankara has already prepared itself for the long run, and it is promising for Turkey that its defense industry has the appetite to achieve more.