In the aftermath of Joe Biden's 'Summit for Democracy' 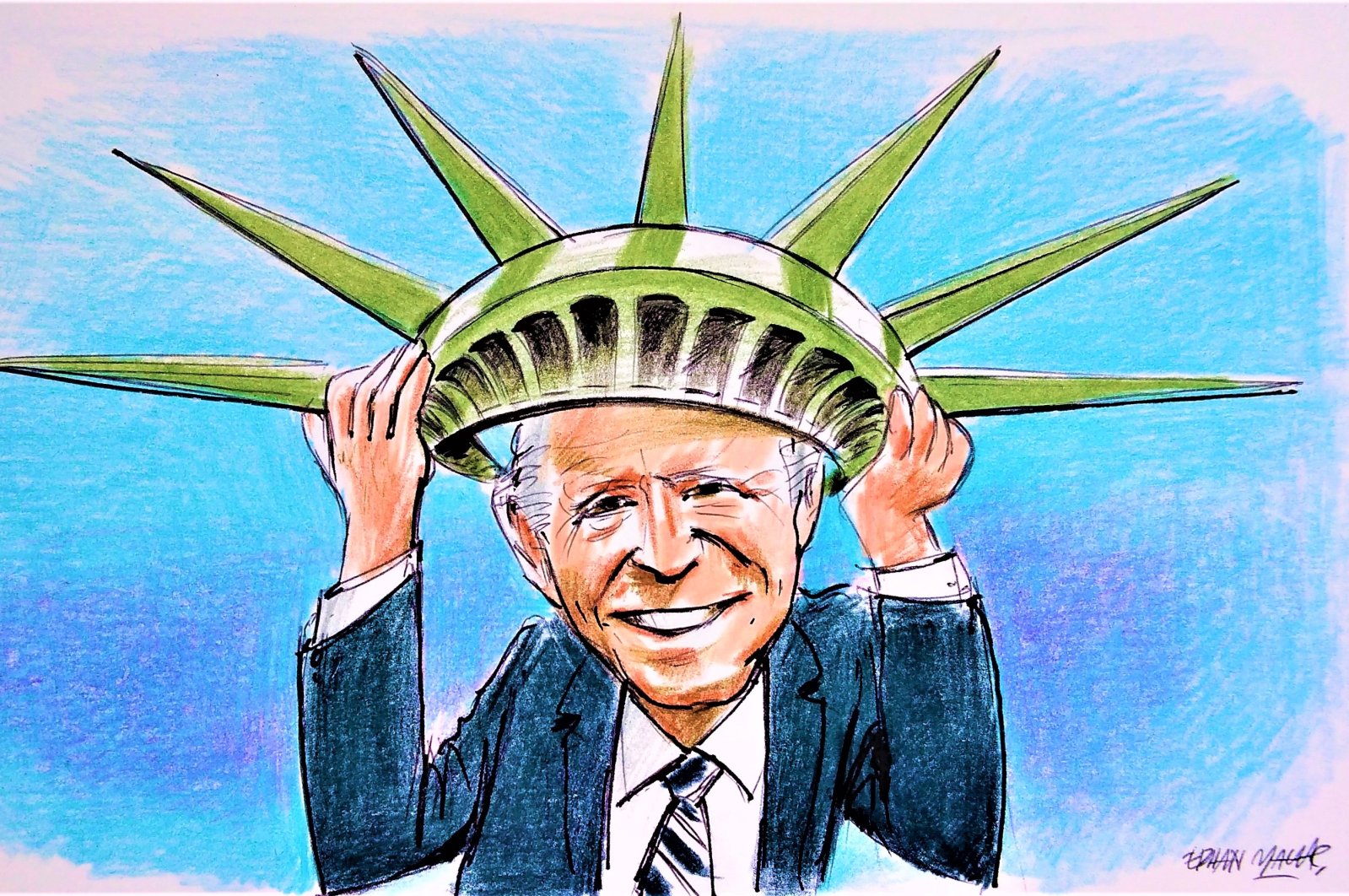 An illustration by Erhan Yalvaç shows U.S. President Joe Biden wearing the crown of the Statue of Liberty.
by Burhanettin Duran Dec 14, 2021 12:05 am

United States President Joe Biden hosted the Summit for Democracy, an ambitious virtual meeting, on Dec. 9-10. The summit, to which 110 nations were invited, had already faced criticism over the choice of participants. Washington invited Angola, the Democratic Republic of Congo, India, the Philippines and Brazil, leaving out countries like Turkey, Bangladesh and Hungary. In this sense, many observers noted that the list of participants reflected America’s national interests. At the same time, the summit was widely viewed as an extension of Washington’s claim to global leadership. Biden, who claims that “America is back,” attached a lot of importance to that event. In an essay for the Foreign Affairs magazine, he pledged, prior to his election, to promote the issue of strengthening democracy at the global level. Biden thus promised to host a summit to bring together “the nations of the free world.”

Many things can be said about that claim. Clearly, the first point is that the U.S. will never get to define democratic legitimacy. At the same time, the so-called summit for democracy rests firmly on geopolitical calculations – at the expense of values. The summit’s chief geopolitical purpose was to form a global coalition of democratic states against the rise of China and Russia’s expansion. Yet the idea of democracies opposing authoritarian regimes is doomed to fail. The U.S. lacks the capacity to engage in the promotion of democracy globally and great power competition makes such polarization impossible.

Indeed, the real world is full of contradictions. For example, Vietnam, which positions itself opposite China, is a U.S. ally that happens to be authoritarian – just like China itself. Likewise, European democracies have no interest in jeopardizing their natural gas interests (like the Nord Stream 2) for the purpose of containing Russia. For the record, neither China nor Russia has a problem with working together with democratic states. They are not in a position to impose their own models on the rest. Indeed, authoritarianism reflects each country’s respective circumstances as opposed to promotion.

Another important point is that Beijing does not ostensibly intend to turn its strategic competition with Washington into an ideological cold war. In other words, there is a difference between supporting democracies and forming an alliance of democratic states against authoritarian regimes. As such, it is already clear that Washington’s newest geopolitical tool will be unsuccessful. It is true that former U.S. President Donald Trump's administration did not care about promoting freedom. It is also true that the Biden administration is tapping into democracy and human rights as a discourse, a source of domestic consolidation and a foreign policy tool. Yet the failure of America’s democracy promotion is self-evident.

Moreover, what happened at the U.S. Congress in January 2021 compelled the experts in Washington to be more humble. They now stress that democracy remains a fragile and unfinished project – even in the United States. Recalling that America’s disastrous retreat from Afghanistan stained the relevant concepts, they recommend their leaders make less ambitious policy choices. For example, they think that America should promote “pluralism” instead of “democracy.”

Does the United States have what it takes to lead the world? Considering that the Biden administration lacks an effective strategy to deal with China or Russia, expecting a strategy on democracy promotion would be a tall order. Let us recall that the U.S. president threatened only economic sanctions if Russia were to invade Ukraine. In other words, Russian President Vladimir Putin seems to have nothing to worry about, except Ukrainian resistance.

The difficulty of restoring America’s global standing, the fact that interests trump values, the complexities of foreign policy and the preferential treatment of certain allies turned Biden’s ambitious summit into an uninteresting online festival.

There are some folks who viewed Washington’s failure to invite Turkey as a sign that President Recep Tayyip Erdoğan was being excluded. Some even believe that the opposition could benefit from that situation. Indeed, they justify that act of exclusion with reference to Turkey’s “drift away from the Western alliance.” One cannot help but find that inferiority complex and unfair approach irritating. Here’s just one fact about those people: They cannot even criticize Washington’s favorable treatment of terrorist organizations like the Gülenist Terror Group (FETÖ) and the PKK terrorist group's Syrian wing, the YPG.