Is the cease-fire sustainable in Nagorno-Karabakh? 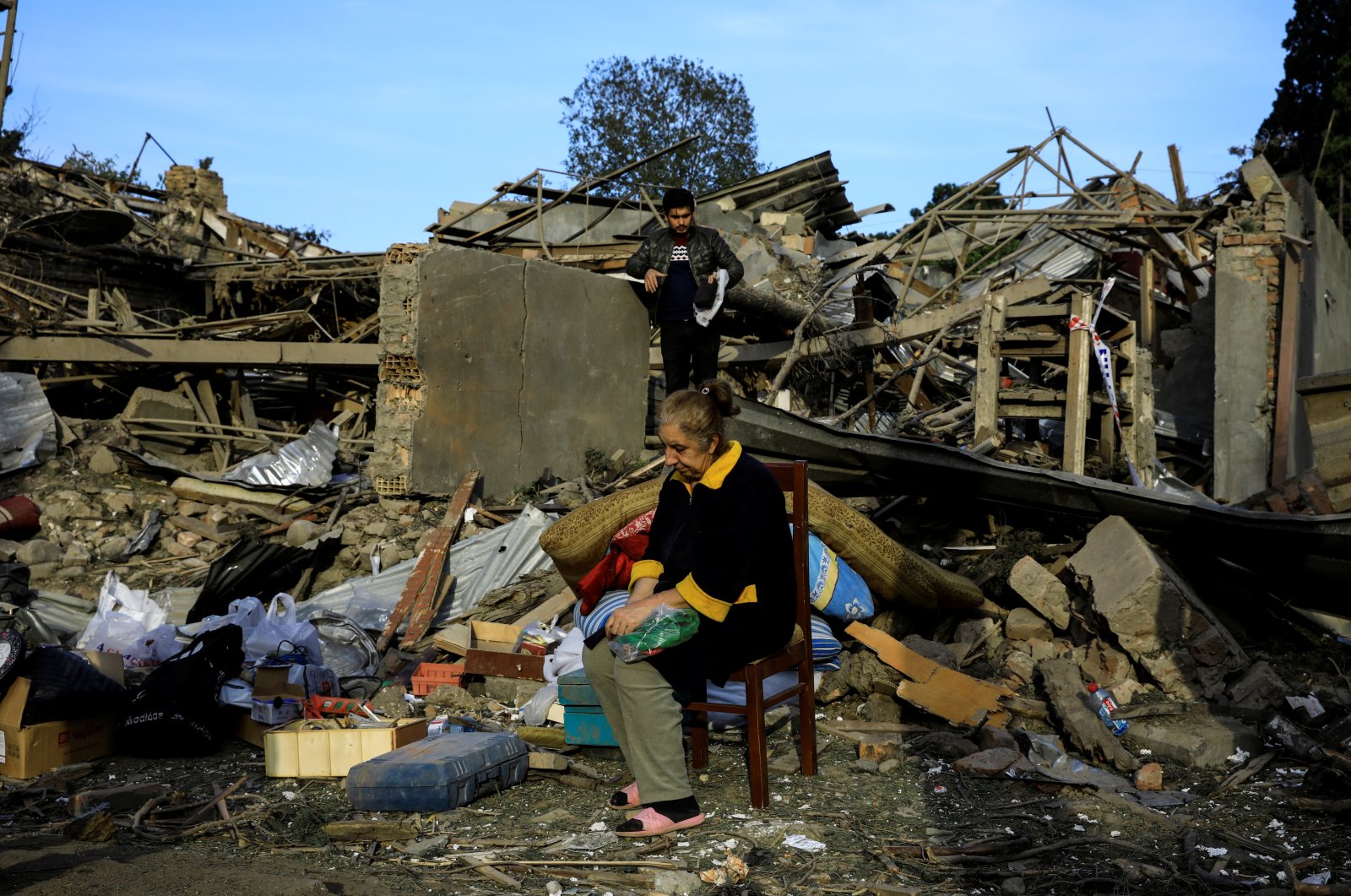 Vesile Mehmedova sits in front of the debris of her brother's home as her relatives search for belongings, at a blast site hit by an Armenian rocket in the city of Ganja, Azerbaijan, Oct. 11, 2020. (Reuters Photo)
by Muhittin Ataman Oct 14, 2020 12:05 am
RECOMMENDED

The latest clash in occupied Nagorno-Karabakh is in its third week. Observers witness that Azerbaijan, which is defending its territories, is the dominant power on the ground. Unlike the previous fights, the Azerbaijani armed forces have begun to free some parts of the occupied lands from Armenia's control for the first time in 30 years. It seems that Baku has increased its military capacity and from now on, it will be increasingly difficult for Yerevan to maintain its control over Azerbaijani territory.

As it is losing ground in Nagorno-Karabakh, Yerevan has started to invite global and regional powers to intervene in the conflict on its behalf. Russia, the most important power in the region, declined the invitation of Armenian Prime Minister Nikol Pashinian, claiming that the Azerbaijani armed forces have been fighting in their own territories, not in Armenia.

Russia, however, has declared that it attaches great importance to and holds responsibility for Armenia. That is, Moscow continues to support Yerevan against Baku. The Russian government has a problem with the current Armenian government, which is known to be pro-American. Therefore, it wants Azerbaijan to punish Pashinian, not the Armenian state. Only after Yerevan changes its pro-American policies will Russia decide to intervene in the crisis on behalf of Armenia.

When Pashinian took a few pro-Russia steps in domestic politics, Moscow began to get involved in the Nagorno-Karabakh conflict, and with that intervention, the warring sides have agreed to sit down at the negotiating table in Moscow. After a 10-hour meeting, Russia's Foreign Ministry explained to the world that the fighting neighbors agreed to declare a humanitarian cease-fire last Saturday. Armenia, however, did not abide by the terms of the deal and violated the cease-fire several hours later and by doing so has shown its negative stance and uncompromising intention once again.

Why did the Armenian side insistently demand to reach a cease-fire only to reject it? There are several possible answers to this question. First of all, the country's military was on the brink of collapse. When the Azerbaijani air force executed a successful operation against Armenian ground targets, it destroyed dozens of armored vehicles and some Armenians fled from the front in different conflict regions. Yerevan's lines of defense were broken.

Second, the Armenian side wants to reach a cease-fire to gain some time. Yerevan knows that it needs a pause to restore its power. Armenia wants to fortify its fighting capacity because some countries, such as Russia and France, can send weapons and ammunition. Furthermore, by declaring the cease-fire, Yerevan wants to restore the status quo, which is in favor of Armenia.

Third, the Armenians want a halt to the fighting under the auspices of Moscow, the main backer of Yerevan during its occupation of Nagorno-Karabakh and its surrounding regions. Since then, Russia has been the main guardian of the country. They still continue to support the Armenian state, in which they have many military bases and to which they provide weapons. Moscow, however, wants to punish the current prime minister of Armenia, who is a staunch pro-American politician. Therefore, Russia will allow Azerbaijan’s offensive until Moscow reaches its targets regarding Yerevan.

Fourth, the Armenian armed forces violated the cease-fire and restarted bombing civilians in different Azerbaijani cities. Yerevan knows full well the world of public opinion did not previously question its human rights violations and war crimes in the 1990s and probably will not in the future.

Therefore, Armenia feels free to violate human rights and to commit war crimes whenever it wants. For instance, in spite of confessions by Armenian authorities, no international organization has blamed Yerevan for the massacre in Khojaly in 1992.

Fifth, Armenia wants to continue its occupation of Nagorno-Karabakh long enough to declare its annexation. Unfortunately, there are some bad examples to follow. For instance, according to U.S. President Donald Trump, the Israeli state has the right to annex the Golan Heights, which belongs to Syria, because it has been occupying the region for more than 50 years. In other words, Yerevan expects that if it continues to control Nagorno-Karabakh, one day it may find an opportunity to annex the land. The longer Armenia controls the territory, the more difficult it becomes to return the region to its real owner.

All in all, a sustainable cease-fire is almost impossible in Nagorno-Karabakh because Armenia and its main backers will force Azerbaijan to restart never-ending negotiations. Nothing concrete, however, will come out of these negotiations. The status quo, which means the continuation of the occupation, will be preserved.

The Azerbaijani government and its people will not recognize this fait accompli. Unlike the Israeli-Palestinian issue, the balance of power in the conflict zone is in favor of Baku. Therefore, by following an irredentist and expansionist policy, Armenia, which is landlocked and wedged between Turkey and Azerbaijan, will never feel safe. That is, under the current conditions, with Yerevan's occupation of the Azerbaijani lands and its nonrecognition of borders with Turkey and Azerbaijan, the security of Armenia is not sustainable either.