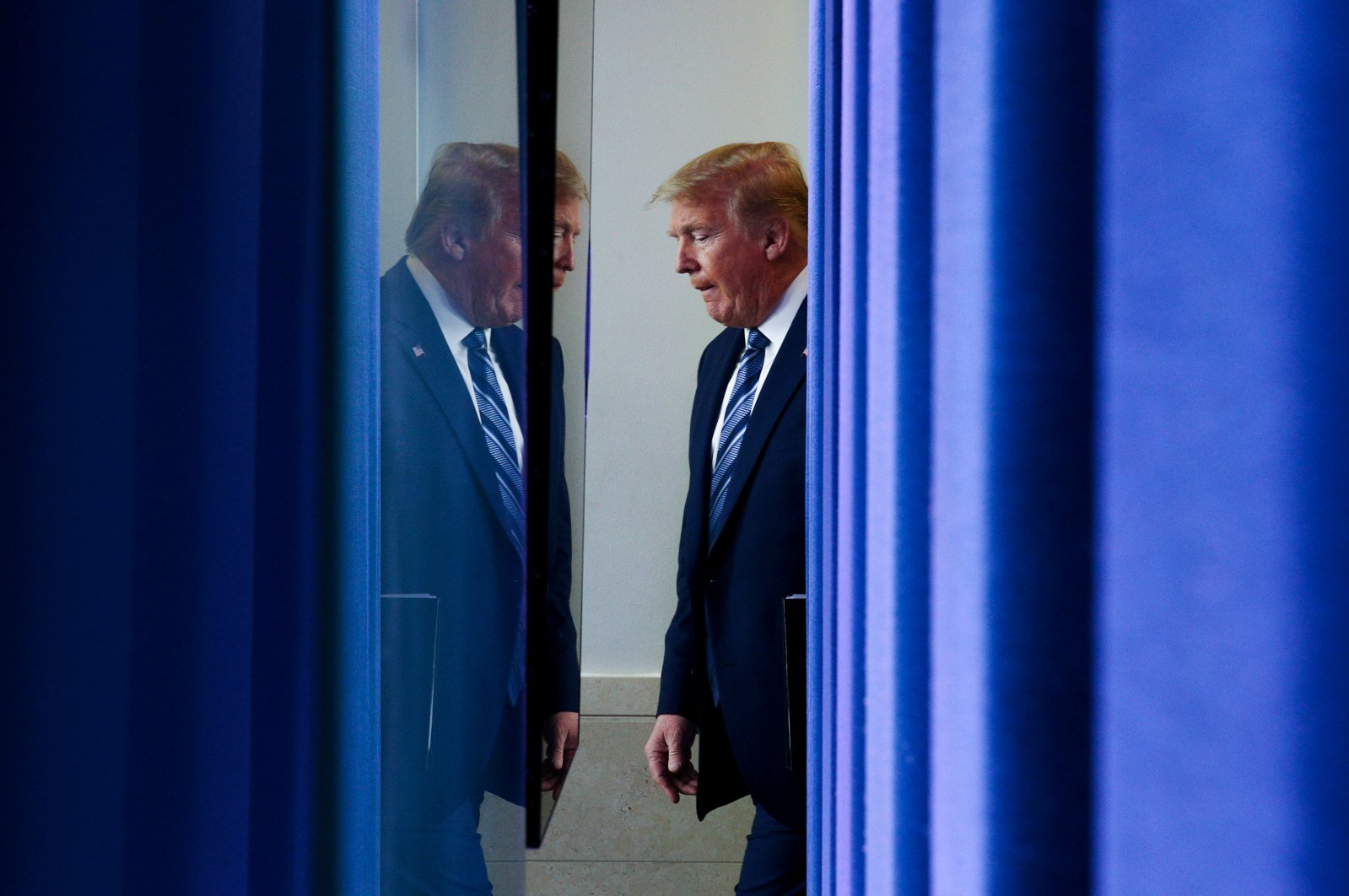 U.S. President Donald Trump arrives to lead the daily coronavirus task force briefing as seen from behind the backdrop of the Brady press briefing room at the White House in Washington, U.S., April 21, 2020. (Reuters Photo)
by Merve Şebnem Oruç Apr 23, 2020 12:05 am
RECOMMENDED

In around 200 days, the U.S. will elect its president for the next four years. While the whole world has been shaken up by the novel coronavirus pandemic, the Democrats in the U.S. are asking another question – whether they will be able to get rid of the incumbent U.S. President Donald Trump this time.

According to them, Trump is losing the public on the coronavirus. Honestly, I don’t know if that is true or not. I stopped trusting American mainstream media’s reports and their polls a long time ago, as it has been proven that every one of them does what is necessary in order to make their side win. Even though I do not support Trump’s policies, what CNN, The New York Times and many others do to finish him off is becoming more and more “fake news,” as the current president is shouting and screaming. Ironically, those outlets sell themselves as the world's most objective news sources and truth-seekers.

Criticizing an American president is a must for the press, as well as his or her opponents, however, Trump has turned them into something else; they act like they are in a war with the White House. They are like spoiled children who asked for something and hit the roof because it did not happen.

After Trump unveiled his 18-page plan for “Opening Up America Again,” while the pandemic is still storming the U.S., the Democrats went mad again. Is it a good idea to start relaxing the strict measures imposed to try to slow the spread of the coronavirus? It is not, since we are not sure if the U.S. has seen the peak of the pandemic yet. The new guidance, however, says that the final decision will ultimately be made by the state governors. They will evaluate the “necessary circumstances for areas to allow employees to start returning to work” as the guidance identifies. I don’t know what is wrong with this as the U.S. is a federal state and every governor should be able to determine their priorities and necessities.

The Democrats act as if they crossed their fingers. They want to see the coronavirus do what they couldn’t achieve in four years and they believe that it brings the end of Trump’s era. Will it happen?

Trump said at a White House press briefing: “We must have a working economy. And we want to get it back. Very, very quickly.” Actually, that is the most important thing for the Americans, even for the working class and their bosses, the millionaires and the billionaires.

Trump also insists that Beijing is responsible for the spread of coronavirus, calling it the “Chinese virus.” The Democrats say that this is a racist definition, but he stands behind his argument. And, you know what? Trump’s supporters believe what he says, as the media has already argued that China hid the virus even from its own people and that it is still fabricating fake news. Not only that, Trump recently accused the World Health Organization (WHO) of a pro-China bias, claiming that the organization is “China-centric.

Putting the blame on the others is the nature of politics, unfortunately. The U.S. is not the place where the virus was born, and Trump is making use of this fact. For ordinary Americans, what he says is absolutely right. The Democrats argue that Trump is not putting the country first and what he does is just to protect his presidency. But, aren’t they doing the same while they wishfully think that the chaos now and in the aftermath of the pandemic will finish him off?

Is the current U.S. president all the bad things he is called? Maybe, and yet, millions of Americans voted for him in the last elections, including moderate, rational and educated U.S. citizens. It might be unbelievable but quite a number of immigrants also chose him as the country’s president.

On Monday, Trump tweeted he will sign an executive order to temporarily suspend immigration to the U.S. “in light of the attack from the Invisible Enemy, as well as the need to protect the jobs of our GREAT American citizens.”

Will that decision stop the U.S. immigrant population voting for Trump? I am sure it will not as he vowed a variety of limits on legal immigration and guest-worker visas, including a “pause” on granting green cards, during his 2016 presidential campaign. He also promised to build a wall on the U.S.-Mexico border and to make Mexico pay for it. He was called a racist, bigot, fascist, et cetera. The Democrat analysts said that he was just trying to steal the hearts of white Americans. But the results proved they were wrong. He gave this promise to stop the flow of illegal immigration, and for many Americans, it was an issue neglected for years. Now, he has the coronavirus, and this is his excuse.

He also attacked China during his campaign, and he said he will fix trade with Beijing. According to him, China was the leading country responsible for the U.S.’ unemployment rate. Millions of Americans supported him as they believe that they are losing their jobs because of the other exporters such as China. Trump put tariffs on imports from China, as well as many other countries. Beijing had been pursuing an aggressive strategy for its exports for years and years, and no one really fought back against it in the U.S., except Trump. His haters warned of a huge global economic crisis that didn’t happen. He is now attacking China for spreading the pandemic, and, you know what? He is chalking up 3-pointers again.

After harsh attacks and scary doomsday scenarios, he won in 2016. The sky didn’t fall. He did exactly what he vowed to do. He fought against illegal immigration, China and Daesh, which was another promise. He said that he would eradicate the notorious terrorist organization, and he has succeeded in the eyes of millions of Americans.

Trump has become third president in U.S. history to be impeached. The harsh attacks of the Democrats, led by Nancy Pelosi, the speaker of the U.S. House of Representatives, blew back. Millions of Americans felt sorry for him as he was all alone against never-ending accusations and extreme partisan politics. The Democrats kept saying that they wanted an impeachment in order to protect the country’s democracy. Trump supporters and many people who didn’t vote for him, however, thought that this argument was just a cover for the Democrats’ “undemocratic” tactics to bring him down. The Democrats actually gave motivation to Trump’s supporters to back him more and more. According to many people, he fought to keep his promises, and what he couldn’t achieve was because he was under a huge attack by his haters.

As I said, I do not like his policies, especially his huge support for Israel's push to crush the Palestinians. But I can read the majority of American citizens’ thoughts, understand their feelings and see their motivations. I bet on him in 2016, and I can say I am “all-in” for him this year, too. The Democrats pushed all the wrong buttons then, and they keep following the same path again. Election day is coming, and Trump is still the odds-on favorite.