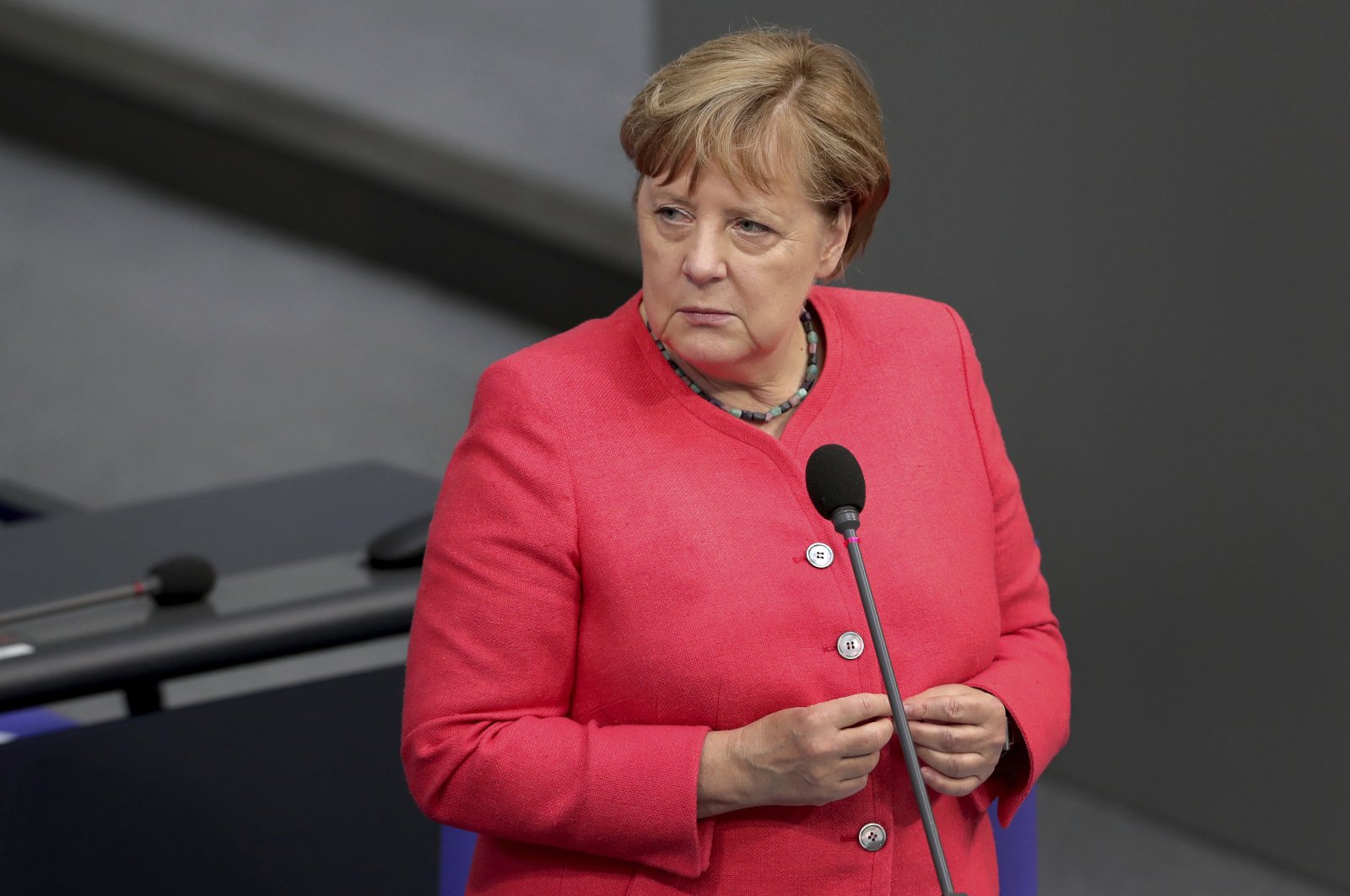 German Chancellor Angela Merkel takes questions from a deputy of the far-right Alternative for Germany party during a meeting of the German federal parliament, the Bundestag, at the Reichstag building, Berlin, Germany, July 1, 2020. (AP Photo)
by Burhanettin Duran
Jul 02, 2020 12:05 am

Given Chancellor Angela Merkel will quit politics in October 2021, she is likely to have a desire to make significant moves in the next six months to leave a lasting mark on European politics.

The EU, which initially failed to meet the coronavirus outbreak with solidarity and even had discussions of dissolution, rebounded in part when Merkel persuaded the northern countries to allocate funds for the southern countries.

However, there are plenty of crisis files on the table.

In strategic terms, the biggest problem for the EU is on what kind of ground it will place its relations with the U.S. and China.

U.S. President Donald Trump's reduction of the number of American troops in Germany to 25,000 is directly related to his discomfort with Berlin’s failure to make the necessary contribution to NATO and his willingness to punish it.

Trump has brought up Germany's continuation of the Nord Stream 2 project as an agenda item, reiterating his harsh criticism just days ago: "Will we, as NATO, protect Germany from the Russians, which pays billions of dollars to Russia for gas?"

Anecdotes of the tension in U.S.-Germany relations were also reflected in the book written by Trump's former security adviser John Bolton.

The reduction of troops is actually a shift by Washington to tackle China in the Pacific.

Urging the whole world to "confront" China, U.S. Secretary of State Mike Pompeo speaks to his European allies of a "transatlantic awakening."

Saying that China is stealing the EU's scientific and economic knowledge, Pompeo called on the EU to "take action against China."

Under pressure from Washington, High Representative of the EU for Foreign Affairs and Security Policy Joseph Borrell’s proposal to "establish a formal U.S.-EU dialogue table against China" is remarkable.

In fact, Merkel is also under criticism for her policy on China.

Merkel has been criticized by Washington on issues such as Huawei, and likewise, she has also been accused inside the country because her balancing policy on China has proved inconclusive.

Merkel, however, should not be expected to try and position the EU against China quickly.

She will continue to balance Beijing's aggressive trade policies, capitalizing on the U.S. agenda to limit China.

Merkel will be managing relations with Washington until November's presidential election and will not attempt an assertive shift in the EU's relations with the U.S., China and Russia.

One area where she can likely make a difference is Turkey-EU relations.

She can assure the interests of both the EU and Germany in Libya and the Eastern Mediterranean equation by opening a new chapter with Ankara.

For this, France and Greece must abandon their aggressive stance toward Turkey.

It is obvious that French President Emmanuel Macron has strengthened Russia's influence in Libya by supporting putschist Gen. Khalifa Haftar.

It would be appropriate for Merkel to step in quickly to overcome this approach, which also endangers NATO's security.

It would be more rational for Paris, which is trying to use the EU card a means of blackmail, to abandon this attitude and come to the table with Ankara.

Athens' remarks on "the possibility of war," which have escalated the tension in recent months, have only raised difficulties for itself.

If the heat of the Eastern Mediterranean and Libya issues triggers other issues between Ankara and Athens (on Cyprus, refugees and the Aegean islands, for example), it would not be to the advantage of either party.

Refugees, the updating of the customs union and visa liberalization are the first areas that come to mind.

Merkel may bring positive dynamism to EU-Turkey relations by creating influence first on Mitsotakis and then on Macron.

This will both relieve the Eastern Mediterranean and contribute to the steps to be taken in Libya within the framework of the Berlin conference.

It will save the EU from being a mere spectator to the developments in Libya.

Even though Merkel may not have a chance to make a difference in the EU's relationships with the U.S., China and Russia, she does a have chance in relations with Turkey over the next six months.