Libya’s GNA up against warlord, militias and mercenaries 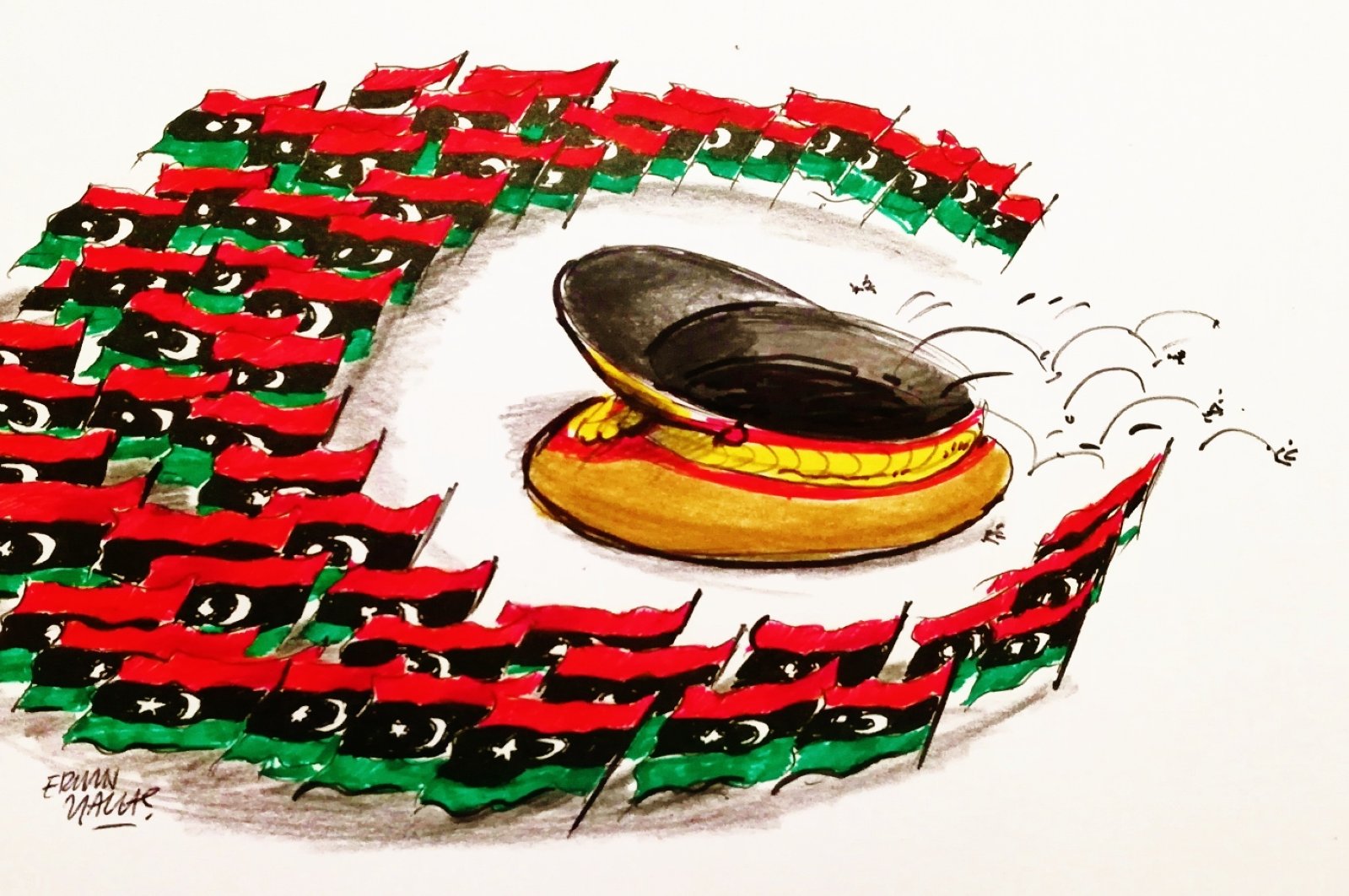 The pandemic and the collapse of oil prices, as well as the post-coronavirus economic crisis concerns, hit headlines all around the world, but the disputes in the Middle East and North Africa show no signs of abating.

Recently, the conflict in Libya has entered a new phase due to Turkey’s presence. Since Ankara and Libya’s U.N.-recognized Government of National Accord (GNA) signed a military cooperation deal along with a maritime boundary agreement late last year, there has been a shift in the conflict. Turkey’s technological and tactical backing has helped the GNA make significant gains, even though the Libyan putschist Gen. Khalifa Haftar’s forces are more equipped and supported by more states. The United Arab Emirates, Egypt, Russia and France continue to back Haftar, a war criminal, despite the international community’s recognition of the GNA.

The GNA ground forces blocked the forces of Haftar, who started the western Libya offensive in April 2019. War crimes and crimes against humanity have taken place during the attack and have resulted in over 2,500 deaths so far. Fighters led by Haftar have already had a well-documented record of indiscriminate attacks on civilians, summary executions and arbitrary detention.

In the yearlong battle, the GNA finally began advancing in the west and southeast of Tripoli, increasing its attacks on Haftar’s bases in al-Watiya and Tarhuna. Ever since the warlord captured those cities, his forces have been using them to stage his siege of the capital city of Libya, Tripoli.

Turkey installed air defense systems in western Libya as part of its strategy to support the GNA. As a result, Turkish drones were able to launch airstrikes immobilizing UAE’s drone strikes. The Libyan Army, headquartered in the capital, is also getting slow but steady results on the ground against Haftar’s forces on the Tripoli front as well. If it goes like this, we may see a reversal in the power of balance in Libya.

A warlord in trouble

Meanwhile, Haftar, who has found himself in a tight corner, announced on April 30 that his forces would halt fighting during the rest of the Islamic month, Ramadan. However, his attacks did not stop. His forces continue to bomb civilian areas in and around Tripoli. Most recently, shells hit near the Turkish and Italian embassies in central Tripoli last week, in an apparent expansion of Haftar’s bombardments. Both states condemned the assault, while the Turkish government warned the warlord and said that it would consider his forces “legitimate targets” if they did not stop attacks on diplomatic missions. The United Nations has also warned that Haftar may have committed war crimes.

Now Haftar has two options on the ground if he wants to fuel the conflict further. Either he will focus on Misrata in the east of Tripoli in order to expand the current battle zone or the UAE air force will directly intervene. The second option would take the lid off the hostility between Turkey and the UAE, which was initiated unilaterally by the latter, and escalate the tension massively as Turkey would definitely respond.

Disregarding the U.N. arms embargo, the UAE has sent quite a number of weapons and aircraft to the Maghrebian country since 2014. What is more, it has conducted scores of drone strikes, which have killed many civilians. Since the start of this year, it reportedly carried out more than 850 drone attacks, which means it has increased the pace of its activities in Libya as the international community tries to bring the warring factions to the table and pave a way out for a political solution.

Abu Dhabi is also believed to have brought mercenaries from other countries to fight for Haftar. In addition to tons of weaponry sent through aircraft, it also uses the neighboring country Egypt, another country which supports Haftar, for land transportation.

The UAE even established its own air base in eastern Libya in 2017. The air base in question has helped Haftar expand its territory following his achievements in Benghazi and Darna as the UAE provided air cover to his forces. In the latest yearlong offensive of Haftar toward Tripoli to capture the city, the Emirati pilots have directly joined the fight.

After the shift in the power balance in the battle zone, Haftar is trying to change the dynamics on the political side. His truce announcement mentioned above was actually a surprise as Haftar had claimed “popular mandate” three days before, on April 27, to rule Libya all alone and said that he would no longer recognize the Shirkat agreement, a U.N.-mediated deal that aims to consolidate Libya’s government. He also vowed to press his assault to seize Tripoli in his announcement.

He said that he is taking control of the country; however, the big question is, how can he be a ruler if he is not able to enter the capital of the country which is still under the control of the GNA? He did not give anyone a chance to say anything. Even the Tobruk-based House of Representatives (HoR) which has backed Haftar since 2014 was not involved in this decision.

Haftar might have tried to buy some time to strengthen his forces after his recent defeats against the U.N.-backed GNA with his cease-fire announcement. However, the GNA rejected its unilateral truce, saying that it did not trust him.

They were right as Haftar does not believe that the Muslim holy month of Ramadan is enough of a reason to call a truce. Despite the U.N. warnings for at least a weeklong cease-fire on humanitarian grounds last year in May, he did not accept the calls. Even more, he used religious rhetoric such as calling people for a “jihad” in order to mobilize Salafists, especially Madkhalis, for an intensified fight during Ramadan of 2019.

There is, of course, a contradiction in the Islamic narrative of Haftar. He has portrayed himself as a “secular” general. He has even accused his opponents of embracing the Muslim Brotherhood, denounced them as “jihadists,” “radicals,” “takfiri terrorists” or “Kharijites” and even more, alleged that they had supported Daesh and Ansar al-Sharia. However, he has strong ties to Salafist organizations, which are currently fighting side by side with his mercenaries. Moreover, Haftar incorporated some Madkhali-Salafist fighter groups, such as the so-called “Tawhid brigade,” “Tariq Ibn Ziyad brigade," “Subul al-Salam armed group” and “al-Wadi brigade” into his self-proclaimed army. This move paved the way for Madkhalism to spread further and gain control over positions in the cities taken by Haftar’s forces such as Benghazi.

It must be noted that there are big differences between the Salafis fighting for Haftar and the others against him. Salafist Madkhalism – named after the Saudi Sheikh Rabi al-Madkhali – previously tolerated by Moammar Gadhafi in Libya since the sect forbids democracy, elections and calls for full obedience to authorities. However, Madkhalis, who are backed by the UAE and Egypt, have become active in politics and in the battleground since the revolt in 2011 although they supposedly do not take part on these fronts.

The Haftar-Madkhalis alliance is a mutually beneficial situation. Madkhalis aim to increase their followers and to take control of the public sphere and are interested in gaining military privileges and good salaries due to the foreign backing. Haftar, on the other hand, needs to control the public discourse. He has been using Madkdalis to do this through fatwas and by taking control of the mosques in the east since 2014, although Libyan society is dominated by Maliki-Sufism. Haftar also need Madkhalis to fight his opponents as he lacks the needed number of local fighters.

You might have noticed that I do not use the term “Libyan National Army,” or its abbreviation LNA, which is widely chosen to define the armed groups affiliated with Haftar,” as it is neither Libyan nor national. The U.N. Panel of Experts on Libya, which was established under U.N. Security Council Resolution 1973, started using the name “Haftar Armed Forces” instead of “Libyan National Army” in April 2019 and developed the abbreviation “HAF,” replacing “LNA.” In addition to that, the panel also started using lowercase letters for armed groups, who refer to themselves as “brigade” or “battalion,” etc., in order to give them “the legitimacy of being a formed military unit of a government.”

In an analysis by the Italian Institute for International Political Studies penned by Libya analyst Jason Pack and published in May 2019, the self-styled LNA or its core full-time militia is made up of approximately 7,000 troops with a total force of around 25,000, even though Haftar forces claim on social media that they have 85,000. Accordingly, the rest of Haftar's forces is composed of 18,000 auxiliary troops, which includes Sudan’s feared Janjaweed militia from Darfur, Chadian mercenaries, tribal militias and other armed groups, such as the eastern and central branches of the Petroleum Facilities Guard. That number accounts for 72% of Haftar’s total forces.

It is known that some foreign mercenaries drawn from different countries are brought by the UAE to Libya in order to fight for Haftar. But the latest addition to his list of mercenaries is more interesting: They belong to the Russian Wagner Group, an allegedly Kremlin-linked private security company, even though Moscow is not firmly wedded to Haftar and rejects the claims about the link between the Kremlin and Wagner.

A recent 57-page U.N. report confirmed reports of Wagner’s involvement in Libya since Oct. 2018, putting the number of operatives at around 1,200. Syrian mercenaries are also fighting alongside Haftar, the report says, and adds that Haftar is bringing in additional mercenaries with more heavy-duty weapons.

All in all, the LNA is just a bucket full of mercenaries, militia units and tribal/regional-based armed groups despite its claim of being the national army of Libya. Rather than purging Islamists – that was what he vowed – Haftar is co-opting ultraconservative Salafists under his command. However, since he appeared in Libya after living in Virginia in the U.S. as a CIA asset for years, he has promised to eliminate Islamists of all shades through imprisonment, exile or death, which is a horrible discourse but was not condemned by the international community.

His ambitions whetted the appetite of several countries, such as Egypt, the UAE and Saudi Arabia as they are obsessed with political Islam, as well as others, for instance Russia and France. All those might argue that their objective is countering terrorism and restoring security in Libya, but they chose to ignore Haftar’s brutal tactics, violation of democratic values and human rights and the possibility of the rise of another dictatorship. They want just another Egypt, another Abdel Fattah el-Sissi kind of ruler in Libya.

Abu Dhabi’s help for Haftar has been especially destructive for Libya. It has conducted hundreds of strikes with its drones and fixed-wing aircraft, causing hundreds of civilian deaths. Paris is also sending him clandestine military aid for several years. They are all committing dirty deeds in Libya, though ironically, they are sitting on the table with the international community to forge a resolution for the war-torn country. Meanwhile, Washington’s approach to the dispute is to figure out what Moscow is planning.

Playing the role of being a useful proxy, Haftar might have enjoyed support from a wide range of states. But now Ankara is officially in the game to back the U.N.-recognized GNA aiming to bring stability and security in Libya.

While Turkey gives its support to the GNA overtly and speaks out loudly, Haftar’s backers led by the UAE are still trying to hide themselves in the shadows. With its intervention in Libya, Turkey has recently shown that it will not let Haftar and its supporters take Libya’s capital. We will see if the others, specifically the UAE, will make up for Haftar’s losses; however, Turkey will likely stay there until it reaches its goal.