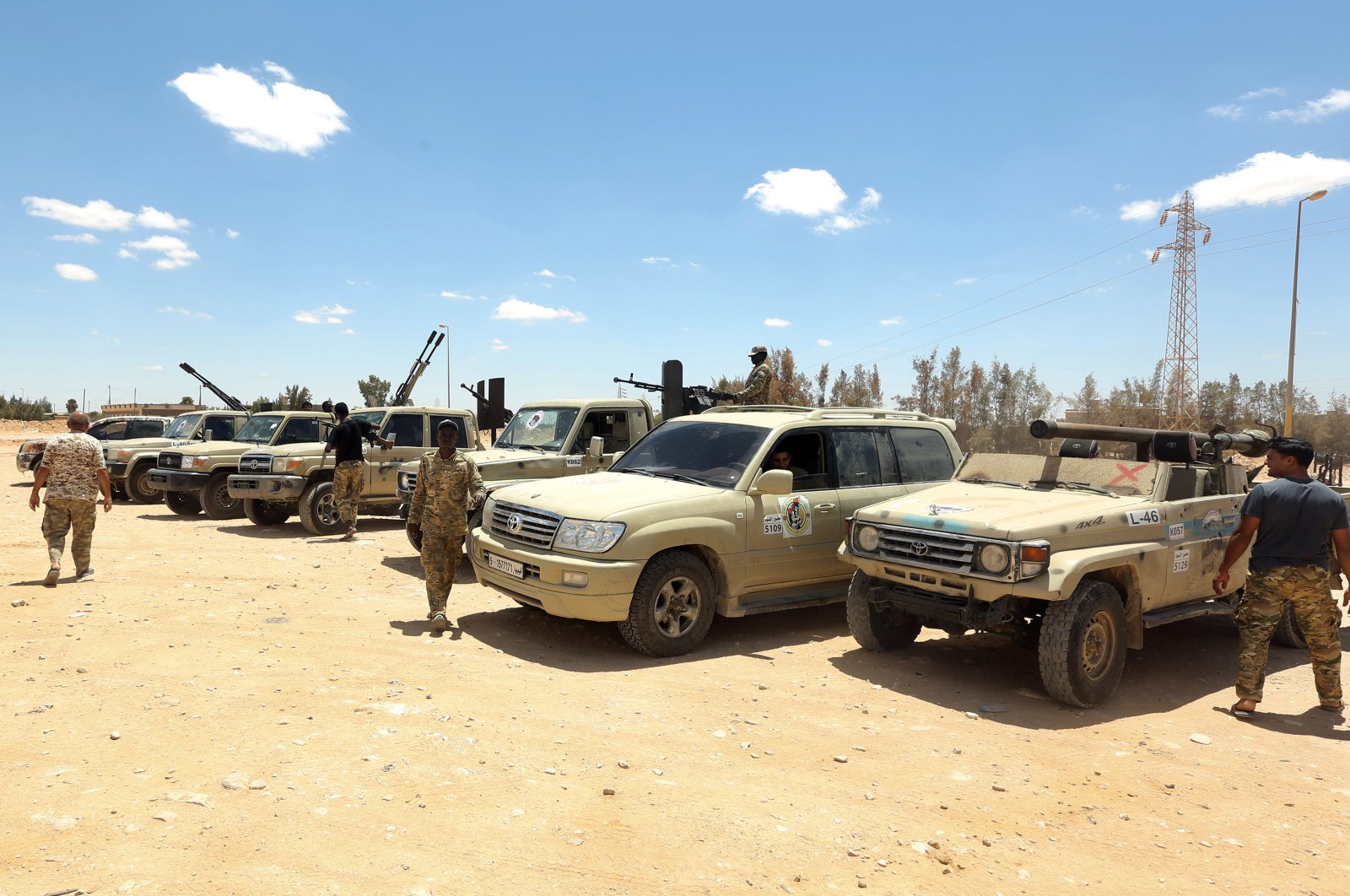 Forces loyal to the U.N.-recognized Libyan Government of National Accord (GNA) secure the area of Abu Qurain, halfway between the capital Tripoli and Libya's second-largest city Benghazi, against forces loyal to putschist Gen. Khalifa Haftar, July 20, 2020. (AFP Photo)
by Burhanettin Duran
Jul 22, 2020 12:05 am

Both sides of the Libyan conflict are getting ready for the Sirte-Jufra front. The attack on al-Watiya air base, probably by the United Arab Emirates (UAE), demonstrated both parties’ determination. As Turkey took precautions to prevent future attacks, Turkish Defense Minister Hulusi Akar held talks with the interior ministers of Libya and Malta on Monday. President Recep Tayyip Erdoğan had announced that a “new deal” would be made in Libya with United Nations backing. The nature of the said deal remains a mystery. The government in Tripoli wants to liberate Sirte and Jufra to facilitate a return to 2015. Benghazi, in turn, knows that the potential loss of oil-rich areas would result in putschist Gen. Khalifa Haftar’s total loss of support. Will diplomatic efforts by prominent powers, including Turkey and Russia, thwart violent clashes over Sirte and Jufra? If the parties agree on the future allocation of oil revenues, will there be a negotiated settlement to hand over Sirte to the West and Jufra to the East? We will find out soon enough.

Egypt, which declared Sirte and Jufra its “red line,” faces immense pressure. France, Greece and the UAE would like to outsource the job, which the Russian Wagner Group and other mercenaries failed to finish, to the Egyptian military. Cairo conducts military exercises near the Libyan border and seeks to consolidate Haftar and his supporters. Let us recall that Egypt stopped Libyan tribes from siding with Tripoli, following Haftar’s military losses, by threatening to take military action. The government in Cairo currently seeks to legitimize a potential coup d’etat in Libya and shape the narrative in the Arab world accordingly. Media outlets aligned with President Abdel-Fattah el-Sissi push the narrative that Egypt will save Libya from the “Turkish occupation” at the request of Aguila Saleh, the chairman of the parliament in Tobruk, and East Libyan tribesmen. At the same time, Egypt’s chief mufti has become entangled in politics, coming out against the Hagia Sophia’s reclassification as a mosque.

France failed to contain Turkey’s influence over Libya with the help of NATO. That country’s June 10 allegation that a Turkish frigate had flashed its radar lights did not find a notable audience either. France’s temporary withdrawal from NATO’s Mediterranean mission, as an act of protest, was largely seen as President Emmanuel Macron’s impertinence. Germany, France and Italy are preparing to sanction outsiders meddling in the Libyan conflict. If those sanctions disproportionately target Turkey, however, they will fuel tensions between Ankara and Brussels. As the European Union’s top diplomat, Josep Borrell, said, managing the relationship with Turkey is the greatest foreign policy challenge that the organization faces today. Borrell knows all too well that escalation won’t help Brussels address a range of problems including the refugee crisis and drilling in the Eastern Mediterranean. He suffers due to the bloc’s inability to devise a common foreign policy and turns to Chancellor Angela Merkel for help.

The UAE, another supporter of Egypt’s potential military intervention in Libya, pushes an anti-Turkish narrative, with references to Arab nationalism, to encourage Cairo. Having dragged Saudi Arabia into a quagmire in Yemen (before saving itself), the Emiratis now tell Egypt to start an endless adventure. For the first time since Gamal Abdel Nasser’s defeat in Yemen, Egypt finds itself at a critical crossroads. The future of the Arab world’s heavyweight suffered a blow due to the 2013 military coup. This time around, the Egyptian people could be sacrificed to quench Gulf crown princes’ ambitions. If Saudi King Salman, who has been hospitalized, were to die, his crown prince, Mohammad bin Salman, is likely to mount pressure on Egypt in cooperation with the UAE. Let us see what el-Sissi will do. Will he sacrifice his country’s interests to serve the adventurism and maximalist demands of the UAE or Greece?

The Egyptian ruler, who faces pressure over Ethiopia’s decision to fill the Renaissance Dam over the Nile, could pave the way to his own ouster by launching a potentially unsuccessful military campaign in Libya. The Egyptian military, which could not even fight terrorist cells in the Sinai Peninsula, is designed to operate at home rather than fight wars abroad. Yet the UAE, with its strong ability to manipulate others, won’t just go about its pro-Israel mission. That country now seeks to persuade el-Sissi to attack Libya by promising to broker a deal between Egypt and Ethiopia. The Egyptian ruler, facing economic hardship at home, stands to be threatened by his own military, which is prepared to do anything to defend its interests. Just remember what happened to Hosni Mubarak.