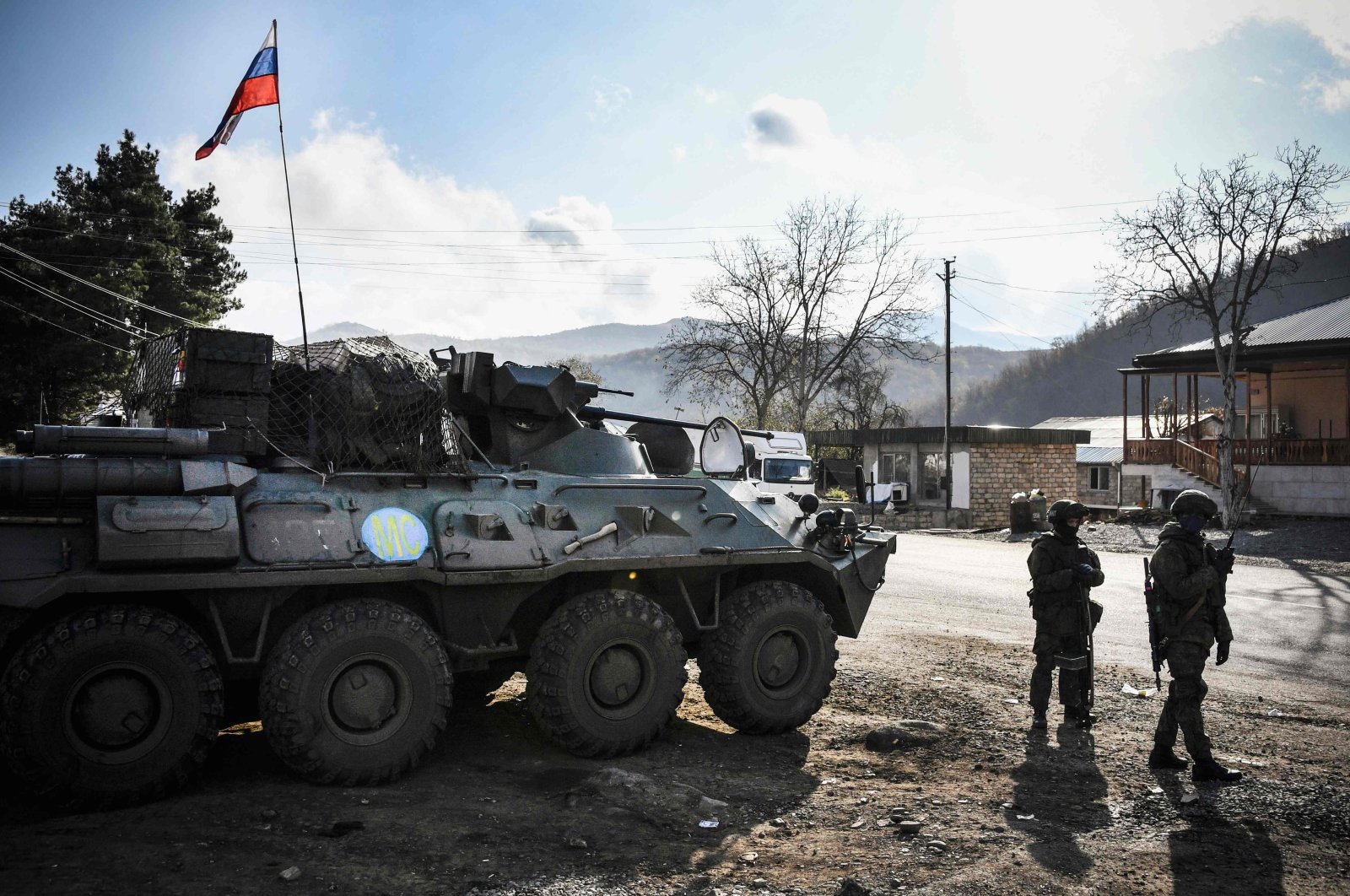 Russian peacekeepers stand beside an armored vehicle at their checkpoint as part of the Karabakh deal, outside the town of Kalbajar, Azerbaijan, Nov. 14, 2020. (AFP Photo)
by Muhittin Ataman
Nov 18, 2020 12:05 am

The second Karabakh war ended on Nov. 10, 2020, when the Armenian government admitted defeat and signed a cease-fire agreement with Azerbaijan. The nearly 30-year-old conflict finally has come to an end.

In the immediate aftermath of the agreement, many discussions have begun on whether the sides will abide by the deal or not. Some observers have discussed the gains and losses of the conflicting sides.

When we take into consideration the developments on the military and diplomatic front, one can see that Azerbaijan is the clear winner. It has liberated several strategic provinces such as Shusha, Khojaly and Tartar and numerous villages in these districts.

In addition, within the scope of the agreement, the control of Kelbajar, Lachin and Aghdam regions was left to Baku. Compared with the situation before Sept. 27, approximately 80% of the occupied territories were liberated from the Armenian occupation.

The agreement provided an opportunity for the vast majority of more than 1 million displaced people to return to their homes. Armenian forces had to withdraw from all parts of the Nagorno-Karabakh region, including the four ambiguous regions.

The Bishkek Protocol, which left the Karabakh region under Armenian occupation, lost its validity. Additionally, according to the agreement, it was decided to open a corridor through Nakhchivan, a topic which is not related to the Karabakh issue.

All of Azerbaijan's expectations were not met as all of Karabakh and surrounding regions could have been liberated and the conflict could have ended with a decisive Azerbaijani victory before Russia had to get involved.

For instance, Azerbaijan accepted to leave the Lachin Corridor, which forms the shortest route between Armenia and the Nagorno-Karabakh region, to Russian control.

On the other hand, Azerbaijan accepted the opening of the Nakhchivan Corridor under the control of Russian intelligence. The Nakhchivan Corridor will provide only limited access to transportation. According to the agreement, people, vehicles and cargo are allowed to pass here, but there is no provision for commercial activity.

The second most important winner of the second Karabakh war is Turkey, who was the only real supporter of Azerbaijan.

Ankara’s military, political and diplomatic support for Baku was more than critical. The Turkish armed unmanned aerial vehicles (UAV) was a game-changer for Azerbaijan’s combat. They paralyzed the Armenian ground forces and destroyed most of its weapon systems.

Turkey has consolidated its alliance and partnership with Azerbaijan. It has shown its deterrent combat power to friends and foes.

Russia is another winner of the war. First of all, Moscow has won new ground in the Caucasus region. It had many military bases in Armenia, now it has military existence in Azerbaijan as well.

Russia has punished yet another pro-American politician, Nikol Pashinian, Armenia’s prime minister, and it has shown that it will not allow any ex-Soviet state to be hijacked by the West.

Armenia, who lost not only seven regions surrounding Karabakh but also some regions of Karabakh, is the net loser of the war.

After signing the cease-fire agreement, a new wave of political instability and large-scale demonstrations and riots started in Armenia. It seems that the Armenian domestic crisis will deepen in the coming months and years.

Especially, the United States and France, the most pro-Armenian countries in the West, did little to intervene in the conflict. France sent some assistance to Armenia, but it could not change the course of the conflict.

The Russian reclaim in a wide region has remained unanswered by the West, which lost its unity and has no uniform reactions to global developments. In other words, the West continues to lose ground vis-a-vis Russia within global politics.

Iran, directly and indirectly, supported Armenia throughout the Karabakh crisis and became another loser. It allowed the transfer of weapons and militias through its territories to Armenia during the last war. With the victory of Azerbaijan, Iran lost huge ground among the Azerbaijani people, who have a religious affinity with Iran.

Considering the winners and losers of the Karabakh war, there are two main conclusions that can be derived from it.

First, there is now a new geopolitical context in the Caucasus. This new reality will surely influence the future of regional politics, which will have implications for the neighboring regions as well.

Second, the Karabakh war has shown one more time that power politics dominate world politics. That is, a state can only get its rights through power. Diplomatic efforts, such as the Organization for Security and Co-operation in Europe (OSCE) Minsk Group have failed to solve the Karabakh problem in the last 30 years.