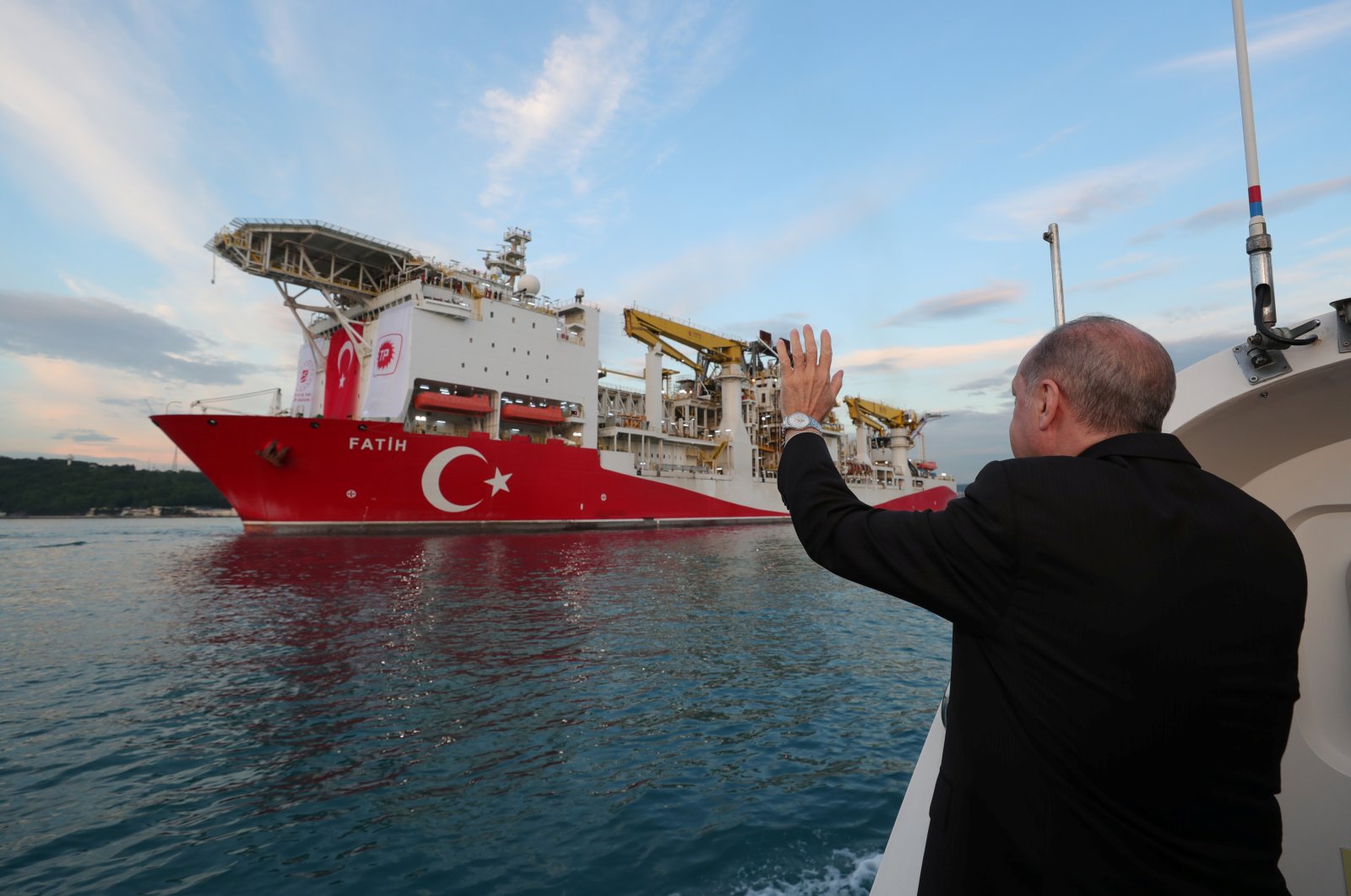 President Recep Tayyip Erdoğan waves as Turkey's drilling vessel Fatih departs for the Black Sea during a ceremony in Istanbul, Turkey, May 29, 2020. (Reuters Photo)
by Burhanettin Duran
Aug 26, 2020 12:05 am

Turkey’s discovery of natural gas in the Black Sea looks to remain a hot topic for the foreseeable future.

The country has finally made the kind of hydrocarbon discovery that it has craved throughout the Republican history.

The field contains not only 320 billion cubic meters (bcm) of natural gas but also suggests that Turkey could find additional reserves within the same 6,000-square-kilometer (2,317-square-mile) area. As such, future news of fresh discoveries should not catch anyone by surprise.

Some observers welcomed President Recep Tayyip Erdoğan’s "good news" last week, while others accused the Turkish government of exaggerating the significance of that find. Exploiting even the best piece of news to fuel ideological debates is a permanent feature of Turkish politics. One's concern that Turkey’s natural gas discovery could “play into the government’s hands” ought not to cloud one’s joy, however.

That Turkey’s discovery will have major implications for Ankara’s energy policy and – by extension – international standing, goes without saying. The country, which has long been a transit route for resources due to its geographical location, now seeks to become an energy producer and, eventually, exporter.

Critics who dismissed Erdoğan’s hailing of “a new era" and Treasury and Finance Minister Berat Albayrak’s talk of a new “axis” as exaggeration are missing a crucial point: This accomplishment is the product of an ambitious energy policy, which Albayrak devised, at a certain point of the Republic’s history – and, as a matter of fact, the Justice and Development Party (AK Party) government’s history.

It was made possible by repeated confrontations and crises between Turkey’s political leadership and guardianship regimes at home and abroad.

This is indeed just the beginning. Turkey has managed to “get the show on the road,” as they say. More will follow.

Having already taken giant leaps in the field of defense, Turkey could actually reach a whole new level of prestige if it discovers the kind of energy reserves in the Black Sea and the Eastern Mediterranean that it hopes to find.

The Turkish defense industry is already on the verge of a major breakthrough. If accompanied by energy discoveries, the country will likely pursue a more active role in the international arena. In addition to changing the nature of Turkey’s energy negotiations with Russia and Iran, robust energy reserves could encourage the European Union to work more closely with Turkey in an additional area.

At the same time, the discovery of natural gas in the Black Sea will encourage Turkey to pursue its interests in the Eastern Mediterranean even more decisively. Any breakthrough in the defense industry or the energy sector can be expected to transform Turkey’s political claims into concrete power.

Turkey is located in a part of the world in which the United States’ partial withdrawal has left behind a major power vacuum. Its neighborhood borders the Gulf, Libya, North Africa and Europe. The Eastern Mediterranean, where a major power struggle is underway, is right at the center of this.

Many players thus are thus making moves to fill the emerging vacuum. France, Russia, the United Arab Emirates (UAE), Egypt, Israel and Greece have been attempting to strengthen their respective positions through a variety of maneuvers.

Greece, however, is arguably in the worst position among these nations. There is a huge gap between Athens’ capabilities and its maximalist demands regarding the delimitation of maritime jurisdictions. No temporary support from France or the EU can secure Greece’s future.

The Greek government should know better than to act as a battering ram. French President Emmanuel Macron’s adventurism positions Greece as a proxy against Turkey. To make matters worse, tensions between Turkey and Greece in the Eastern Mediterranean threaten to spread to the Aegean Sea, Cyprus and other areas.

This kind of worst-case scenario cannot be stopped by France or other European countries by sending a few frigates or military jets to the area.

Ankara and Athens, old neighbors who stand to suffer the greatest damage in case of a hot conflict, must resolve their differences through peaceful and fair solutions. Greece must uncover the true intentions of those external powers, which seek to use Athens as a battering ram, if it wants to facilitate the Eastern Mediterranean's transformation into a sea of peace and sharing.