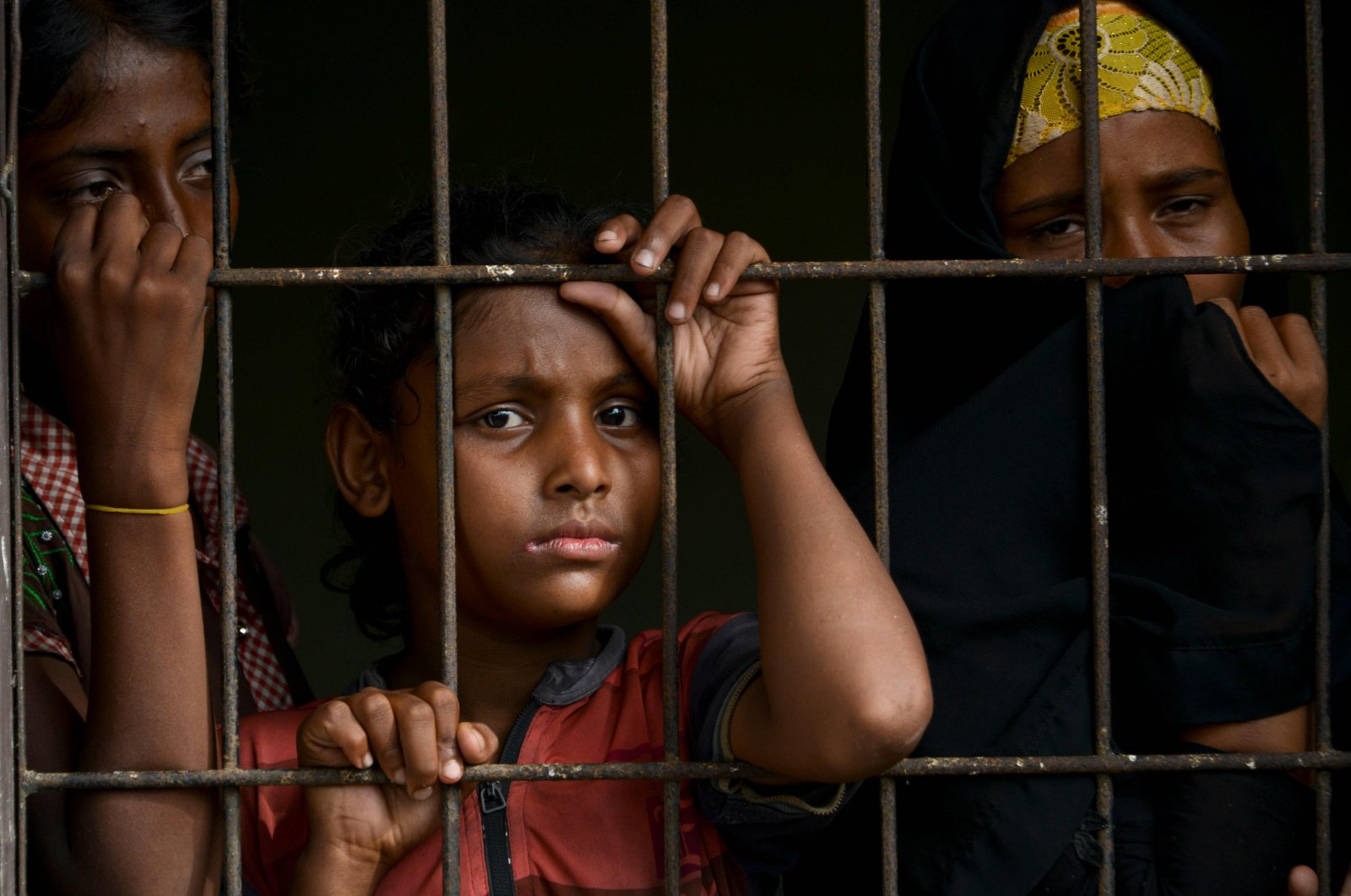 Rohingya from Myanmar look through a fence at the immigration detention center in Lhokseumawe, in Indonesia's North Aceh Regency, June 26, 2020. (AFP Photo)
by Merve Şebnem Oruç Jul 02, 2020 12:05 am
RECOMMENDED

Handwashing, personal hygiene and physical distancing are the first steps in preventing the spread of the coronavirus; however, practicing this advice is almost impossible for hundreds of thousands of Rohingya refugees in southern Bangladesh now facing the deadly threat of COVID-19.

According to reports, the first coronavirus case in the Rohingya refugee camps was registered on May 14. There are currently 45 Rohingya in the refugee camps who have tested positive for COVID-19, while four have died of the disease. In August 2017, more than 750,000 Rohingya refugees, mostly women and children, fled neighboring Myanmar to Bangladesh following the latest crackdown of Myanmar forces on the minority Muslim community. Today, the number of stateless Rohingya living in a network of 34 camps in Bangladesh is more than 1.2 million. Only around 400 of them have been tested so far since the start of the pandemic.

The COVID-19 case numbers in the camps have so far remained low, but many cases may go undetected due to limited testing capacity. Regardless of symptoms, suspected coronavirus cases are being isolated since home quarantining is impossible in the thickly populated refugee camps. Not wanting to be placed in isolation, Rohingya are avoiding the tests and concealing their symptoms.

The world is well aware of what is happening to the Rohingya, the world’s most vulnerable people, in Myanmar, though Myanmar’s authorities continue to debate the issue. The U.N., international human rights organizations and some world leaders have stated that Myanmar is waging a war against Rohingya Muslims.

The International Court of Justice (ICJ) in The Hague ordered Myanmar to protect the Muslim minority against violence and to preserve evidence of a possible genocide. Outlining the steps that it has taken to stop a genocide, Myanmar submitted a report to the ICJ recently. However, the Rohingya, who are stuck in refugee camps in very poor conditions, are afraid to return home, three years after the horrible military crackdown, even though the Myanmar government says it is ready to take them back.

No one can blame the Rohingya for being wary. The violence they suffered at the hands of the Myanmar military and local militias has been described as a "textbook example of ethnic cleansing" by experts. One of the biggest tragedies of this century is currently taking place in Myanmar, the country formerly known as Burma until 1989 when the junta ruling Myanmar changed the English name of the country without the consent of its people.

Despite the Rohingya having lived in Myanmar's western Rakhine state, formerly known as Arakan, for centuries, citizenship was denied to them in 1982. The junta that ruled Myanmar for half a century ruled according to a mix of Burmese nationalism and Theravada Buddhism, heavily discriminating against minorities. The Muslim minority Rohingya have faced persecution, severe discrimination, abuse and escalating violence because of their religion and ethnicity. They have been subjected to arbitrary arrests, slave labor, the burning of their villages and rape. They have been killed with guns, torture and machetes. In 2009, a senior envoy from Myanmar to Hong Kong branded the Rohingya “ugly as ogres.” In 2011, the junta was dissolved following a 2010 general election, and a civilian government rose to power. However, heavy discrimination against Rohingya persisted. In 2012, the government of Myanmar banned the word "Rohingya," as well.

Even Pope Francis, who visited Myanmar in 2017, did not publicly mention the Rohingya Muslims by name during his visit; instead, he waited to utter the words when he was in neighboring Bangladesh. He defended his decision saying that doing so “would have been a door slammed in the face.” The pope argued that his political caution enabled him to have a private meeting with Senior Gen. Min Aung Hlaing, the architect of the brutal campaign against the Rohingya and tell him in person that the horrors of the past were no longer tolerated.

Long considered one of the world's most persecuted and least wanted people, Rohingya have no legal status in the primarily Buddhist country. Buddhist monks provoke anti-Rohingya sentiment, encouraging violent attacks. The Buddhist nationalist movements have repeatedly called for the annihilation of the minority. In 2012, violent attacks incited by a campaign of anti-Muslim hate speech destroyed quite a number of Rohingya communities and displaced more than 100,000 people. The 2017 crackdown was the third large exodus of Rohingya after hundreds of thousands fled in 1978 and 1991-1992. Myanmar's largest minority has been persecuted for decades.

While 700,000 were able to escape from the campaign of violence in 2017, thousands more reportedly remain stranded in Myanmar without the means to cross the border. Analyses of satellite images from Myanmar found that thousands of villages of the Rohingya minority have been set on fire. Their boats are often sunk, and their corpses are thrown out to sea by forces of neighboring countries during their attempts to flee Myanmar. They can take refuge only in Bangladesh. A couple of years ago, the discovery of new mass graves along the Thai-Malaysian border have shown that escaping persecution in Myanmar is also not a solution to their suffering. Mass graves were found in jungle camps set up by human traffickers on the Thai-Malaysian border to hold Rohingya refugees. Traffickers have reportedly kept hundreds of Rohingya prisoners until their families paid ransoms. According to a Bangkok-based nongovernmental organization (NGO), hundreds have already died in the camps in question, which had probably been there for at least five years.

Despite the trouble and hardship they face, there is still little sympathy for Rohingya around the world. And now, they are threatened by COVID-19.

International NGOs and the U.N. High Commissioner for Refugees (UNHCR) are making a huge effort to fight the coronavirus and prevent its spread in refugee camps. But they, too, are not lucky as the heavy rain from Cyclone Amphan made their jobs more difficult last month. Even before the storm, Bangladesh’s countrywide lockdown order challenged the efforts of doctors and aid workers. Bangladesh also cut the aid groups’ manpower by 80%. There are also government-imposed internet and phone restrictions within the camps, and they cannot get medical advice from outside.

As a journalist, I have covered war. I have been in conflict zones and covered war crimes. I have met people who were the victims of abuse, rape, violence and torture. But nothing was like the suffering of the Rohingya. They are stateless. They cannot secure shelter and are struggling to get food and clean water. They do not have clothes or shoes. Their homes and villages no longer exist. Almost all of them have lost most of their family members due to the killings. They escape from being massacred with machetes and are threatened by diseases. They just have poverty, misery, pain, trauma and tears.