Russia grows stronger in East Med while US looks for comfort 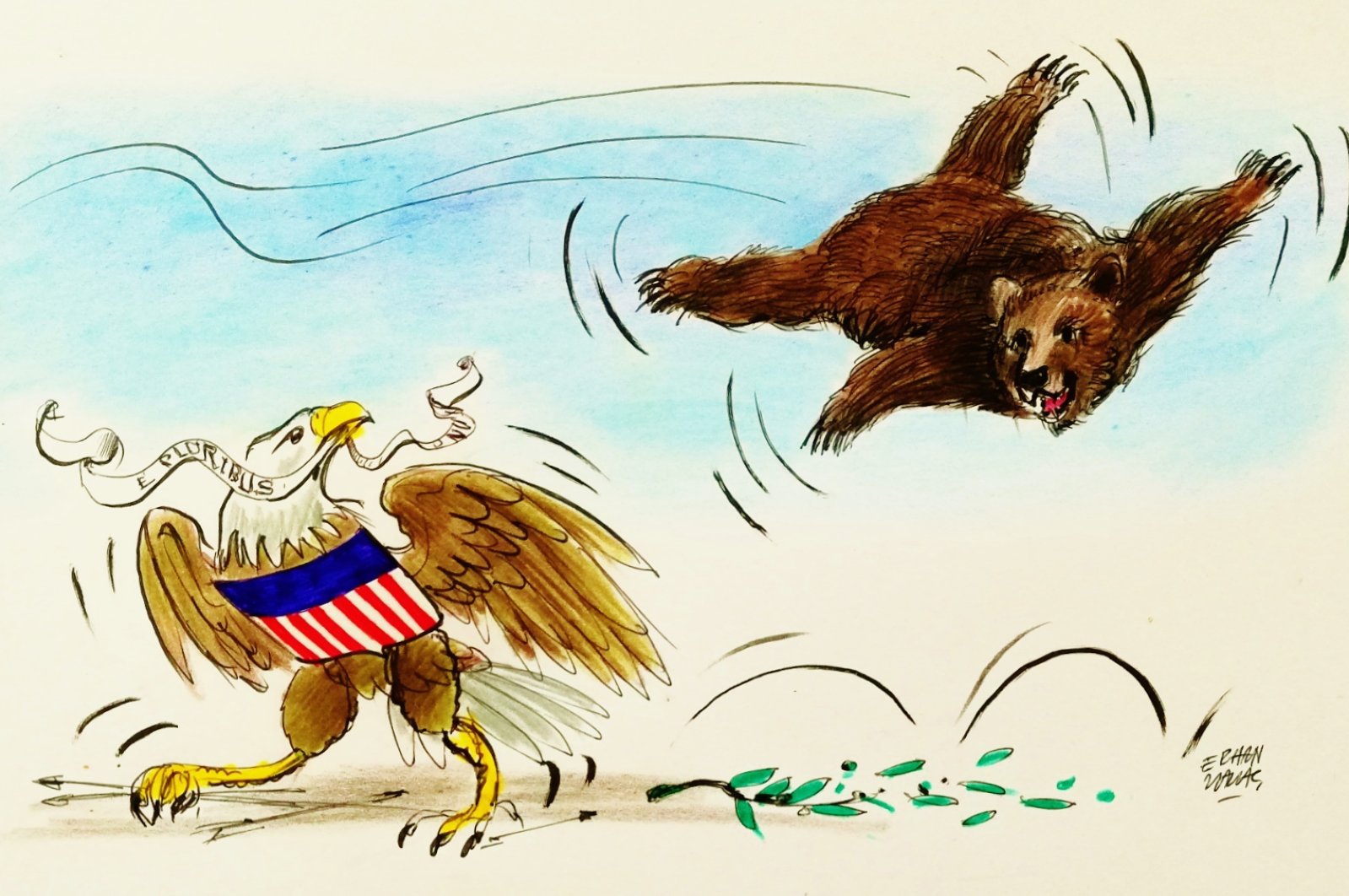 International focus has been on the Middle East for decades and particularly on Iran, Syria, Egypt, Iraq and Libya over the past several years. However, whatever is written about the Middle East, Russia is always part of the equation. Russia is in Syria, while on the other side, there are the countries of the Eastern Mediterranean, Israel foremost among them, all of which have their own relations with Russia. The state of things also is not related to the Syrian civil war. It would be an exaggeration to only think of Russia as connected to the region through the war in Syria, as Russia maintains relations with many countries, such as Greek Cyprus and Israel.

Moscow has a long history with Tel Aviv, as it does with Damascus, stretching back to the era of the USSR. The Soviet Union was one of the first countries to recognize Israel, doing so in a vote in the U.N. Security Council (UNSC) in 1967. The two countries’ relations particularly began to increase following the end of the Cold War. This was also the time that saw intense migration by Soviet Jews to Israel. Moscow attempted to mediate between Syria and Israel during a time of increased tensions, having been a patron to Damascus in the 1970s, and whereas it was not able to reconcile the two countries, it always maintained close relations with Tel Aviv. Israel repeatedly expressed its concerns regarding border security to Moscow following the eruption of the Syrian civil war in 2011. Israel’s basic concern was that Iran, which is also a Russian ally, would move freely throughout Syria.

Because of this, Israel has occasionally hit Iranian forces in Syria with cross-border air and missile strikes. Israel’s anxiety over Iran’s presence in Syria has also led Israel to strengthen its communication with Russia. Another dimension of Israel’s policies, citing border security, was its attempts to keep U.S. interests in the region alive. This, in turn, stems from Russia being the greatest benefactor from the de facto situation in the region that took shape following the policy of former U.S. President Barack Obama's administration to draw back U.S. forces in the Middle East.

The current U.S. president, Donald Trump, however, having scrapped almost all of the Obama administration's policies, continued the drawback of U.S. forces in Syria and in the Middle East in general, which necessitated Israel to become even closer with Russia. The deployment of Russian S-300 missile defense batteries and then S-400s later on as part of Moscow's cooperation with Syria in the Eastern Mediterranean, has increased Israel’s anxiety even further, as the S-400s are much more advanced and have a longer range, posing a greater danger to Israel. Despite Israel’s two main concerns over the past five years of the Syrian civil war, that of Iran’s presence in the country and the deployment of S-400 batteries, Tel Aviv and Moscow have maintained their diplomatic relations at the highest level.

The Eastern Mediterranean Gas Forum was established with the participation of seven countries in January of 2019. Israel, Greek Cyprus and Greece signed an agreement a year later, in January of 2020, to run three natural gas pipelines, the EastMed pipelines, to transport 10 billion cubic meters of natural gas per year from Israel and Greek Cyprus to the European mainland via Greece. Part of the agreement put into force by these three countries is the construction of the Poseidon pipeline, which will be the deepest undersea pipeline in the world, with construction costs estimated to be from $7 billion to $10 billion. Natural gas from this pipeline will meet 2% of the energy needs across Europe, although at a higher price, as its cost has been calculated to be two-and-a-half times more expensive than natural gas from Russia.

Russia has continued the good relations it had with Greece and Greek Cyprus from the Cold War era, in part because of Cyprus’ geographic location. The lack of a solution to unite the Greek and Turkish sides of the divided island of Cyprus also benefits Russia. And due to international uncertainty, any NATO activity is out of the question. Like the ongoing civil war in Syria, this situation also serves Russia's purposes.

Israel, in the Eastern Mediterranean, wants to keep healthy relations with Greece and Greek Cyprus as well. This, however, creates a problem for Russia, as Israel can find the support it needs for natural gas from Cyprus after not receiving it from the U.S. in Syria. The Eastern Mediterranean Security and Energy Partnership Act of 2019, which has yet to be voted on in the U.S. Congress, envisages cooperation between Israel, Greek Cyprus and Greece. One of the bill’s purposes is to prevent Russia from accessing the Greek Cyprus’ ports of Paphos and Limassol. Greek Cyprus, however, announced that it rejected the U.S. proposal and refused to close its ports to Russian ships. Following this, the Russian Foreign Ministry released an explanation that said:

“This proposed bill was prepared in order to develop Cypriot-U.S. cooperation, however contains a provision with the purpose of directly harming Russian-Cypriot cooperation. Russia has always firmly committed to the principle of not interfering in relations between other countries. It is our belief that no one has the right to intervene in the constructive dialogue we have had with Cyprus for many years.”

The U.S. Congress has also introduced into this bill a number of obstacles for Ankara procuring the S-400 missile defense systems it had agreed to buy from Moscow. In response, Ankara continued with its planned S-400 purchase from Russia. Both Greek Cyprus and Turkey's response to the bill in the U.S. Congress shows that Russia is a bigger player in the Eastern Mediterranean. Russia’s presence there is reciprocal. It is not bothered that Israel, with which it has close relations, is a close ally of the U.S.; Russia determines its allies otherwise. It is also not bothered in its arms sale of S-400s to Ankara that Turkey is a NATO country. It has no conditions in its relationship with Greece or Greek Cyprus, both of which are members of the EU.

U.S. policies in the region, however, are the exact opposite of those of Russia. Ankara’s repeated requests for Patriot batteries from the U.S. to ensure Turkey's border security make the S-400s a bargain. The entire process with the U.S. betrayed its imperialism, with it seeing no need to hide the greed overshadowing the provision of aid and support for its allies. As for intimidation, the U.S. has Congress levy sanctions on countries that don't follow what it says in order to knock them down. The newly established interconnected and digitized world will no longer accept such behavior.