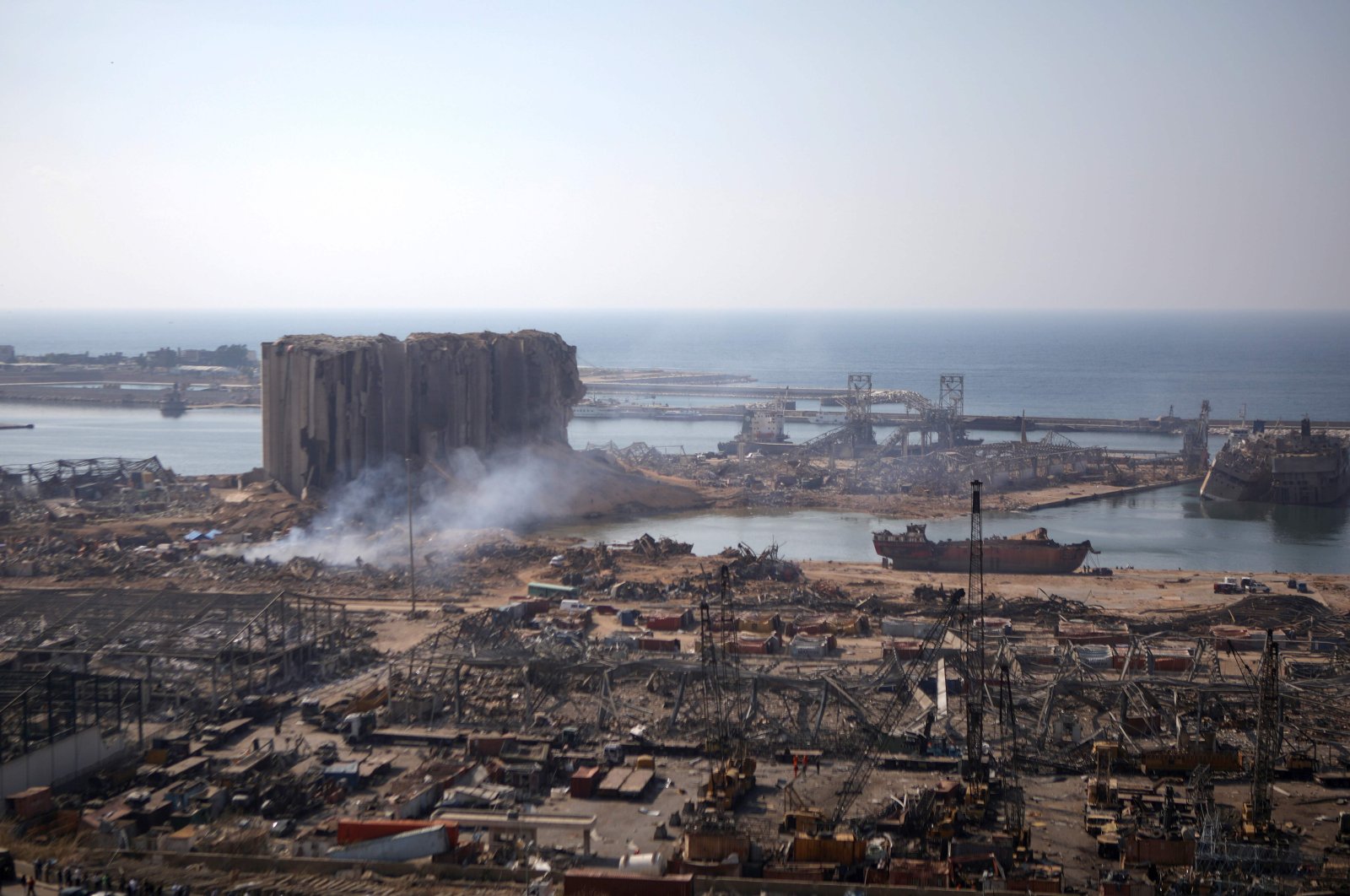 A partial view of the devastated Port of Beirut is pictured from the nearby neighborhood of Mar Mikhael, two days after a massive blast there shook the capital Beirut, Lebanon, Aug. 6, 2020. (AFP Photo)
by Talha Köse Aug 08, 2020 12:05 am
RECOMMENDED

Most analysts call the explosion at the Port of Beirut Lebanon’s Chernobyl. It is the moment of truth that put the last nail in the coffin of the nation’s rotten and dysfunctional political system. Authorities' incompetence and negligence seem to be the apparent causes of the explosion that devastated Lebanon’s capital and its most important port. The country, however, is in more systemic chaos and instability, the roots of which lie in the fabric of the political system that was designed during the Mandate of Syria and Lebanon between 1923 and 1943, when France was the caretaker of the region following the fall of the Ottoman Empire.

French President Emmanuel Macron was the first world leader to visit Beirut after the explosion. In his speech there, Macron said that the political system needs to be reformed, and the country's corrupt structure needs to be changed to attract foreign investment and aid. While his words are valid and most analysts would agree with his statements, we nonetheless have to question how the Lebanese political system came to such chaos. More importantly, we have to ask how to change their corrupt scheme during a time of regional disarray and with the uncertainties of the post-COVID-19 world.

The system of modern sectarianism was institutionalized during the French Mandate, but I don’t think the French president has any clue how to integrate all the sects and ethnic groups around the same plan. Macron and his country’s political position concerning Lebanon can only be applauded by one of the major factions of Lebanese society. Turkish, Iranian or Saudi leaders could also be welcomed with similar enthusiasm in a few other districts of Beirut, but all the actors that are applauded with passion in some parts may be protested in others.

Lebanon’s National Pact of 1943 institutionalized the confessional system and power-sharing mechanism in the country. The agreement was useful in preventing the interventionism of the French Mandate and curbing the Muslim population’s desire to unite with Syria. Still, the outcome of the pact was to institutionalize confessionalism, which led to Lebanon’s weak and fragmented political fabric. The National Pact and the confessional system based on their 1932 census was problematic from the beginning. Still, it is the French who tried to keep this dysfunctional structure to maintain their power with Lebanon’s then Christian majority. The government they introduced brought relative autonomy and freedom to ethnic and sectarian groups, but also made Lebanon much more dependent on external actors.

The Lebanese political system needs to be reformed; this is an undeniable fact. But we also have to recognize that it is based on a fragile and fragmented social fabric and produced by the deliberate choices of the very actors who constructed modern Lebanon's government. The country was created to be weak and artificial from the beginning, so it could be exploited by external powers. The Mandate of Syria and Lebanon tried to create a majority Christian nation in the Levant to maintain its long-term influence in the broader region. The political pact was not the consequence of consensus or the negotiation of Lebanese people. It was instead a system that was imposed by external powers and accepted by local political elites. The same situation and the same model is relevant for the Taif Agreement of 1989, which further deepened the confessionalism that divided the country. No substantive mechanisms were created to counterbalance the centrifugal tendencies emanating from these fragmentations.

Mechanisms that stimulate cross-allegiances within society are missing, and no arrangement of accountability has been formulated. The problem within Lebanon is not just the hegemony of Hezbollah over the political system, as their challenge goes far deeper and is much more systemic, and is often avoided in the rhetoric of external actors.

All the foreign players have somehow exploited the vulnerabilities of Lebanon. Iran used the county's feeble security system to its advantage against Israeli aggression and expansionism. The Saudis exploited the Sunnis and weaknesses in their economic system. France profited from the fears of Christians in the country. Israel benefited from all the problems and divisions in the country. The Syrian regime exploited Beirut's lack of functioning security mechanisms and weak military sector. Many neighboring countries also took advantage of the loose and accessible political structure of Lebanon. In times of peace and prosperity, this pliability was beneficial to the Lebanese people. The country attracted finance, investment and tourism. Prospects were gloomier for Lebanon, however, when the oil wealth of the Middle East came to the country in the 1960s and as it moved in the direction of normalization in the aftermath of its civil war. It is necessary to keep in mind that Lebanon has only experienced stability during exceptional periods.

Lebanon’s problems and weaknesses are structural rather than situational. Still, functional factors like the COVID-19 crisis, their economic downturn and refugee flows are further deepening Lebanon’s vulnerabilities to both internal and external shocks. It is, therefore, tough to address the systemic problems in Lebanon and deal with its weaknesses without initiating region-wide peace and stabilization efforts. The current situation in the Levant looks like the pre-Westphalian disorder of the Thirty Years' War. The major international actors are not interested in taking responsibility to end this conundrum. If foreign governments try to enforce another artificial system that can hardly be maintained with the genuine will of Lebanon’s population, then the situation may turn into another stage of disappointment. It would be challenging to put out the current fire in Lebanon without extinguishing the flames that blanket the entire region.