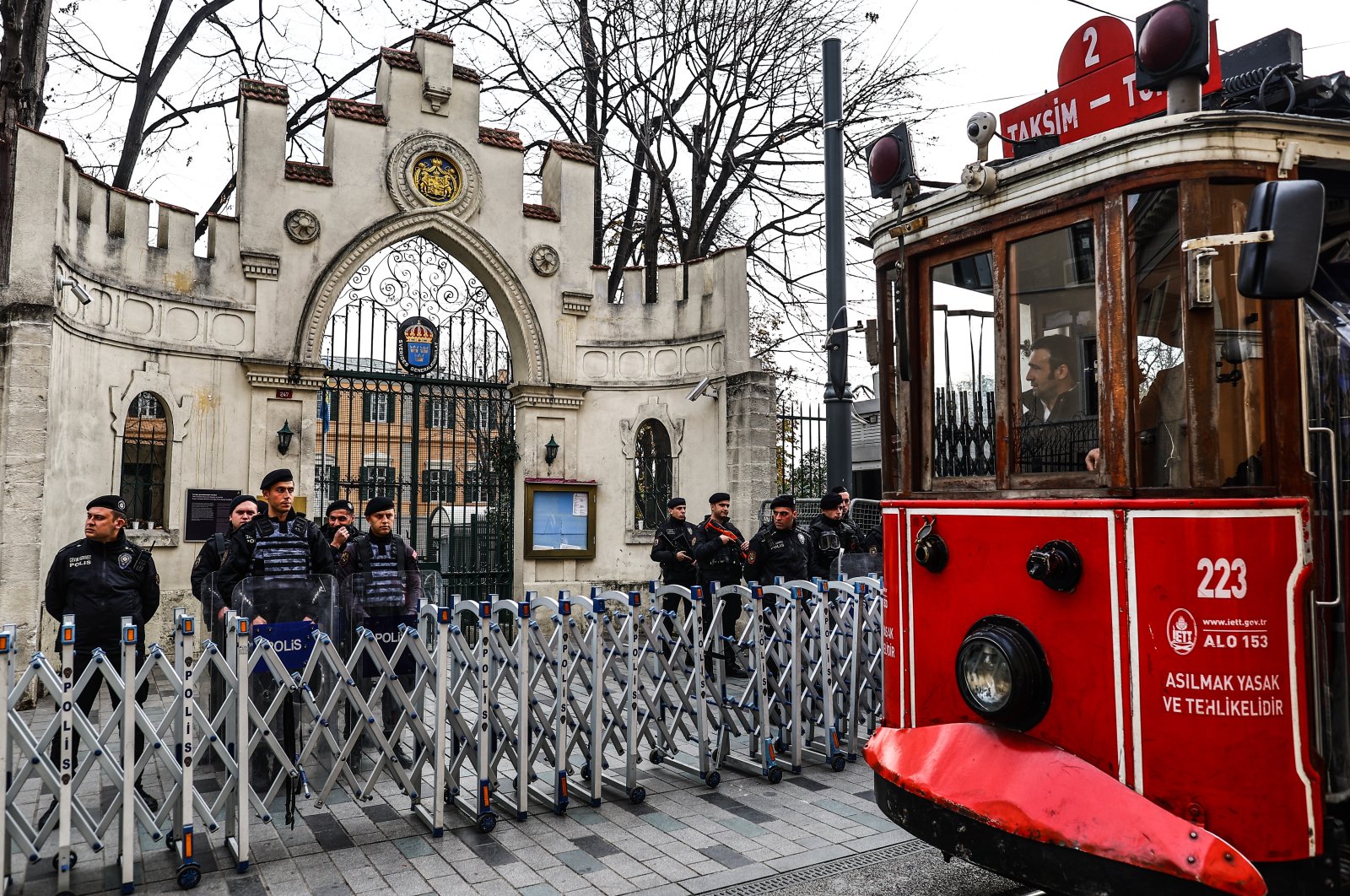 Turkish riot police stand guard before a protest while a nostalgic tram passes in front of the Consulate General of Sweden, in Istanbul, Türkiye, Jan. 22, 2023. (EPA Photo)
by Muhittin Ataman Jan 25, 2023 12:05 am

'It is unfortunate to see how European governments, directly or indirectly, pave the way for the ultranationalist and xenophobic circles to dominate European politics'

Last week, an ultranationalist, far-right extremist and racist politician Rasmus Paludan burned a copy of the Quran, the holy book of Islam, in front of the Turkish Embassy in Stockholm amid Swedish security forces’ inertia.

Paludan, a Swedish citizen and the leader of the Danish political party Stram Kurs (Hard Line), had asked for permission to burn the Quran and Swedish officials allowed him to commit this “hate crime.” Unfortunately, Swedish officials gave permission to Paludan, whose racism was registered by the court and who was sentenced to prison in his home country (Denmark), to commit this provocative act.

The Swedish government has stated that this shameful and disrespectful act is "freedom of expression." However, this is not the case. It is clear to everybody that freedom has its limits. Like many rights and freedoms in modern democracies, neither freedom of expression nor freedom to hold demonstrations is unlimited. These freedoms cannot be used in a way that violates the rights of others or the public order. No one can find excuses for attacks against other individuals, nations, states and religions. Hate crime is a hate crime, whether it is committed against Christians, Muslims or any other religion.

As a matter of fact, according to the United Nations Covenant on Civil and Political Rights adopted in 1966, freedom of expression may be limited to the purposes of respecting the rights and dignity of others and protecting national security, public order, health and morals (Article 19). In addition, a more imperative regulation was made in Article 20 of the covenant, which requests the law to prohibit “the defense of any national, racial or religious enmity that incites discrimination, hatred or violence.”

Looking closely, one can see that there are different dimensions of this attack. I will briefly analyze the different meanings of this provocation. First of all, this attack is not an isolated hate crime, since the crime was committed by a leader of a (racist) political party. Unfortunately, many other politicians from different European countries have been repeating the same hate crime. If this hate crime goes unpunished, it will continue to increase in the future, which will end in the loss of the longtime European practice of multiculturalism and the culture of peaceful coexistence. It is unfortunate to see how European governments, directly or indirectly, pave the way for the ultranationalist and xenophobic circles to dominate European politics. European officials ignore the fact that racist movements that are tolerated and protected are increasingly taking over mainstream European politics.

Second, Sweden and many other European countries have begun to cross all lines, when it comes to religion. Radicalization and ultranationalization of secular European politics motivate European political actors to attack any religious thought and symbol. Today, there is no moral, social and political redline for many secular Europeans, and they insistently attack on all divine thoughts and traditions, whether Islamic or Judeo-Christian. This incident and similar acts will lead to further social and political cleavages and counterproductive activities within the European countries, which host millions of Muslims. Millions of European Muslims will feel threatened against these continuous attacks against Islam and Muslims, which have become part of daily life in Europe. Unfortunately, Paludan’s actions, which resulted in the commission of hate crimes against Islam and disrupted public order, are protected by the Swedish police. This protection will encourage others to commit similar hate crimes. Since his acts are protected by the government, Paludan himself has been repeating this provocation many times.

Fourth, this attack has directly targeted Türkiye, which is considered a rising star of the Muslim world. Especially after improving its success in the defense industry and its intention to follow a more autonomous foreign policy, Türkiye has been otherized and alienated by many European countries. While Türkiye has been asking the European countries to have a mutual relationship based on equal partnership, the European counterparts want to maintain the old-style hierarchical relationship. European politicians and media have been trying to delegitimize Türkiye and targeting its domestic politics. Therefore, we cannot think of this attack independently of the British newspaper the Economist’s most recent anti-Türkiye coverage. This attack is yet another well-planned provocation against Türkiye.

Fifth, when considering the timing of the attack, it is closely related to the Swedish NATO membership process, which is on the negotiation table between Türkiye and Sweden. In one sense, this hate crime has targeted the Swedish NATO membership. If this is so, then it has reached its purpose. As a reaction to the attack, President Recep Tayyip Erdoğan has clearly declared that “those who allowed this disgraceful act in front of the Turkish Embassy cannot expect good news from Ankara on Sweden’s NATO membership.”

In other words, the Turkish government was negotiating the NATO membership process with the Swedish government. It seems that this attack has halted the negotiations.

All in all, Sweden’s allowance and protection of Paludan’s provocative act, which has disrupted the public order in the country, is an abuse of freedom of expression and violates the rights and freedoms of others. The Swedish position, which contradicts the main principles of international law, including the related articles of the U.N. and the Council of Europe, is a state-sponsored violation of human rights by racist and xenophobic politicians. These and similar attacks threaten multiculturalism and tolerance and ignite large-scale discrimination throughout Europe. It is clear that insults against Islam and its holy book set the stage both for racist attacks against Muslims and aim to provoke Muslims. As a result, despite the serious and imminent threat he poses to public order, allowing Paludan’s actions is against international human rights law.

Even though Swedish officials are aware that such planned and officially sponsored acts offend Muslims worldwide, they have been tolerating anti-Islamic demonstrations and actions aiming to vilify and demonize the Holy Quran and the Prophet Muhammad. This last event has revealed one more time that Europe has no respect for Islam and Muslims. Not only xenophobic and far-right extremists, but also the so-called mainstream European politicians are determined to implement pejorative standards for Islam and Muslims.

Naturally, all these anti-Islamic activities will have huge short and long-term political and social implications on European-Muslim world relations, since all Muslim states will somehow condemn these attacks and if necessary, will take certain measures. Therefore, the responsible European countries must take necessary measures to protect the culture of peaceful coexistence in the continent and thus contribute to international peace and security before it is too late.