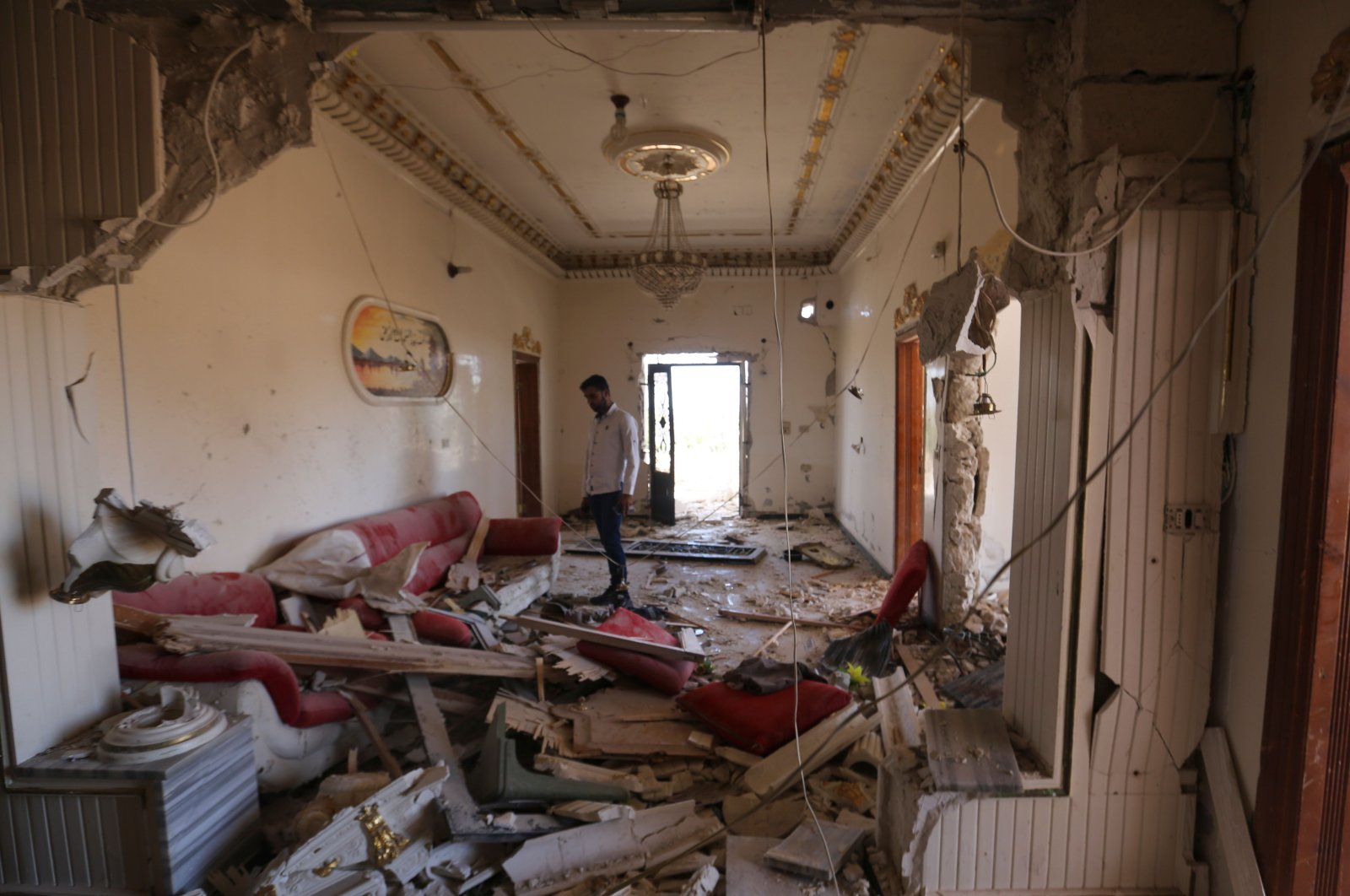 A Syrian man inspects his damaged house following a bombardment by regime forces on the village of Balyun, southern countryside of Syria's northwestern province of Idlib, June 6, 2020. (AFP Photo)
by Hakkı Öcal Jun 15, 2020 12:05 am
RECOMMENDED

How will Bashar Assad react when the Caesar Act, a new U.S. legislation imposing new sanctions, takes effect this week? The designers of the new U.S. sanctions claim they are not only going to devastate the already dying Syrian economy but will also crush the regime’s main backer, Iran and Lebanese Hezbollah, too. The new law is named after a Syrian military photographer who smuggled the shocking evidence of torture out of Assad’s dungeons in 2015.

Unlike earlier sanctions, the Caesar Act targets Assad’s backers in banking, business and politics in neighboring capitals, the Gulf states and Europe, which have maintained economic links to Damascus. Starting on June 17, any official who finances Assad will be subject to travel bans, denied access to the capital and face other measures including arrest.

Almost 30% of the Syrian people currently use Turkish currency in their daily transactions. Those refugees in Idlib in particular and the large area to the north of Aleppo are transitioning to the Turkish lira from the Syrian pound which has devaluated incredibly. In 2010, a year before the civil war started, 45 Syrian pounds would get you $1; today, you need 5,130 Syrian pounds to get $1. An average government employee would earn about 8,000 Syrian pounds; and a family of four would live comfortably off that sum. Today with 8,000 pounds you can buy a medium-sized watermelon. The Expatistan.com web site estimates a family of four needs 557,000 pounds a month to barely survive.

After 10 years of merciless civil war in which half a million people perished and 10 million fled the country, Syria is chocking economically. Charles Lister, a so-called Syria expert at the Middle East Institute, in his POLITICO article, concludes that Assad is grasping for air amid Syria’s financial collapse. Lister recommends that it is about time for the U.S. to lick Bashar into shape. He thinks the U.S. still matters in the region despite the fact that “American leverage in Syria may have suffered from irrational and unpredictable decision-making from a Trump Oval Office.”

Lister, like all other neocons of his ilk, has difficulty blaming George W. Bush or Barack Obama for the disaster in Afghanistan, Iraq and Syria. The former ruined the established power structure, pushing U.S. troops into those lands; the latter had pulled them out, ushering in Daesh terrorism. But no, it is the poor Donny Boy who ruined the U.S. position “in the region and the world at large.” But everything has not been lost. According to Lister, the U.S. “still has a chance to shape the outcome in Syria ... because Assad’s current weakness provides more meaningful opportunities than we have seen for some time.”

That is if you are comfortable shaking Assad’s bloody hands during the bargaining process.

What Lister, in fact, recommends is the traditional imperialistic recipe. That is, depending on the situation, the powers that be in Washington either send the cavalry in or a bag full of greenbacks. This time no cavalry or infantry can touch the ground because Assad’s Russian and Iranian allies are heavily guarding him; Plan B should be executed. No matter how much blood is dripping from those hands, go and shake Assad’s hands and tell him that he could still save his dictatorship if he agrees “to some form of power-sharing and nationwide cease-fire ...”

Lister also thinks that “through back channels with Moscow and dialogue with Europe” this is an achievable plan.” He graciously concedes it is far from enough, but it is a good start.

The Caesar Act is not going to hurt the illegal mechanisms the Syrian and Iranian dictators put in place for the last decade. Assad and his cousins in Syria and Iranian mullahs in Tehran will find ample ways around the U.S. sanctions, so would Hezbollah in Lebanon. Yet again, 60% of the Syrians in the areas where the Assad forces reign will suffer.

Instead of pressing its knee on the neck of the Syrian people, the U.S. should put its hands around Assad’s neck.