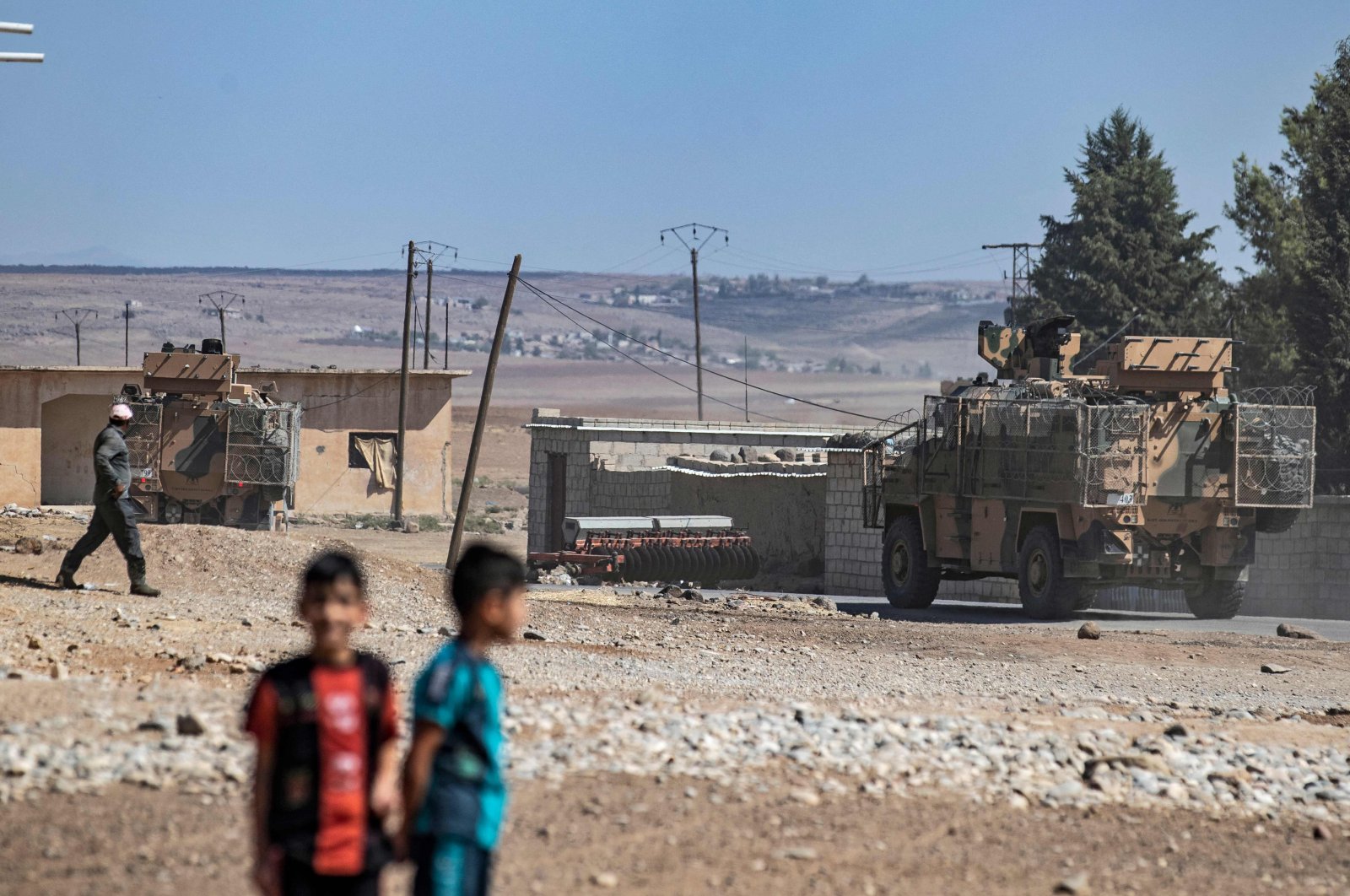 Turkish and Russian military vehicles patrol in the countryside of Rumaylan (Rmelan) in Syria's northeastern Hassakeh province near the Turkish border, Sept. 16, 2021. (AFP Photo)
by Burhanettin Duran Sep 20, 2021 12:05 am
RECOMMENDED

Turkey’s main opposition party has been advocating dialogue with Damascus for a long time. Citing the government’s attempt to normalize relations with the United Arab Emirates and Egypt over the last year, they maintain that they were right all along. Certainly, the result of the Syrian civil war is highly significant for Turkey’s own future due to its implications for YPG, a terrorist entity, and refugees.

But first, an analysis of the reasoning behind the normalization of Turkish foreign policy: As I wrote Saturday, normalization between the various Middle Eastern players and Turkey’s “fresh page” policy both reflect geopolitical changes on regional and global levels. Globally, great power competition deepens – which rules out bloc politics in the region. After all, each nation has conflicts of interest with their allies and certain aligning interests with adversaries.

As such, normalization is not an emotional decision to “get along with everyone.” Nor does it occur at one side’s request. It goes without saying that all states revisit their policy choices with an eye on emerging geopolitical trends. They make calculations and make new choices if necessary. That, too, is the driving force behind the pursuit of normalization by regional powers, including Turkey.

Indeed, timing is everything when it comes to normalization. Policymakers make a multidimensional “net assessment” to establish what it would bring to the table or what it would cost. At the end of the day, the measure of one’s success is under what terms and in return for which interests a compromise is reached.

Turkey’s most recent normalization efforts proved yet again that it is an “effective and flexible rational player.” The country pursues normalization to cement its gains in the Eastern Mediterranean, Libya and Syria. All in all, the normalization process continues due to the new state of affairs and with the consent of the rest.

Turkey on the Syrian crisis

Turkey’s current approach to the Syrian conflict is not geared toward bringing down the regime. Instead, it aims to facilitate the return of Syrian refugees in a dignified manner and to get in the way of the terrorist entity PKK/YPG. Both the safe zones and Turkey’s military presence in Idlib serve those purposes. That is how the Turks stopped 4 or 5 million more Syrians from seeking shelter within their borders.

At the same time, it is clear that failure to incorporate the Syrian opposition into that country’s future government would result in the failure of both missions. Amnesty International recently published a detailed report documenting the torture and detention of returnees by the Syrian intelligence. It would make no sense for Syrian refugees to return “with celebrations” (as the main opposition leader claims) if they face torture and oppression.

It is no secret that Bashar Assad would like to negotiate terms with Ankara. Indeed, Russian President Vladimir Putin occasionally brings up dialogue with Damascus in his meetings with Turkey’s Recep Tayyip Erdoğan. Yet the Syrian regime brings the Geneva talks to a standstill, opposing a transition process that would include the opposition. Nowadays, ahead of President Erdoğan’s meeting with Putin, there is an attempt to strong-arm Turkey by bombing Idlib. Let’s make one thing clear: The decision of whether to speak with Damascus or not is not about ideology or emotions. It is a question of the regional balance of power, vested interests and timing.

There are sporadic media reports about contacts between the Turkish and Syrian intelligence agencies. Sufficient progress must be made in those talks in order for diplomats to start meeting publicly. The administration in Damascus must be willing and prepared to welcome back all Syrian citizens. As a token of its commitment, it must take seriously the processes that involve the Syrian opposition. The regime must also stop pushing Idlib’s millions of residents toward the Turkish border.

One could make the case that Damascus will eradicate YPG upon reaching an agreement with Ankara. Assuming that plan could be implemented without the United States retreating completely, the following question remains unanswered: Can the administration in Damascus be trusted with the opposition or refugees? Moreover, it is highly unlikely that Washington will just pack up and leave, as it did in Afghanistan, anytime soon. If the Turkish government were to take the main opposition CHP’s advice, the country would withdraw from safe zones, thus perpetuating the stay of asylum seekers in Turkey.