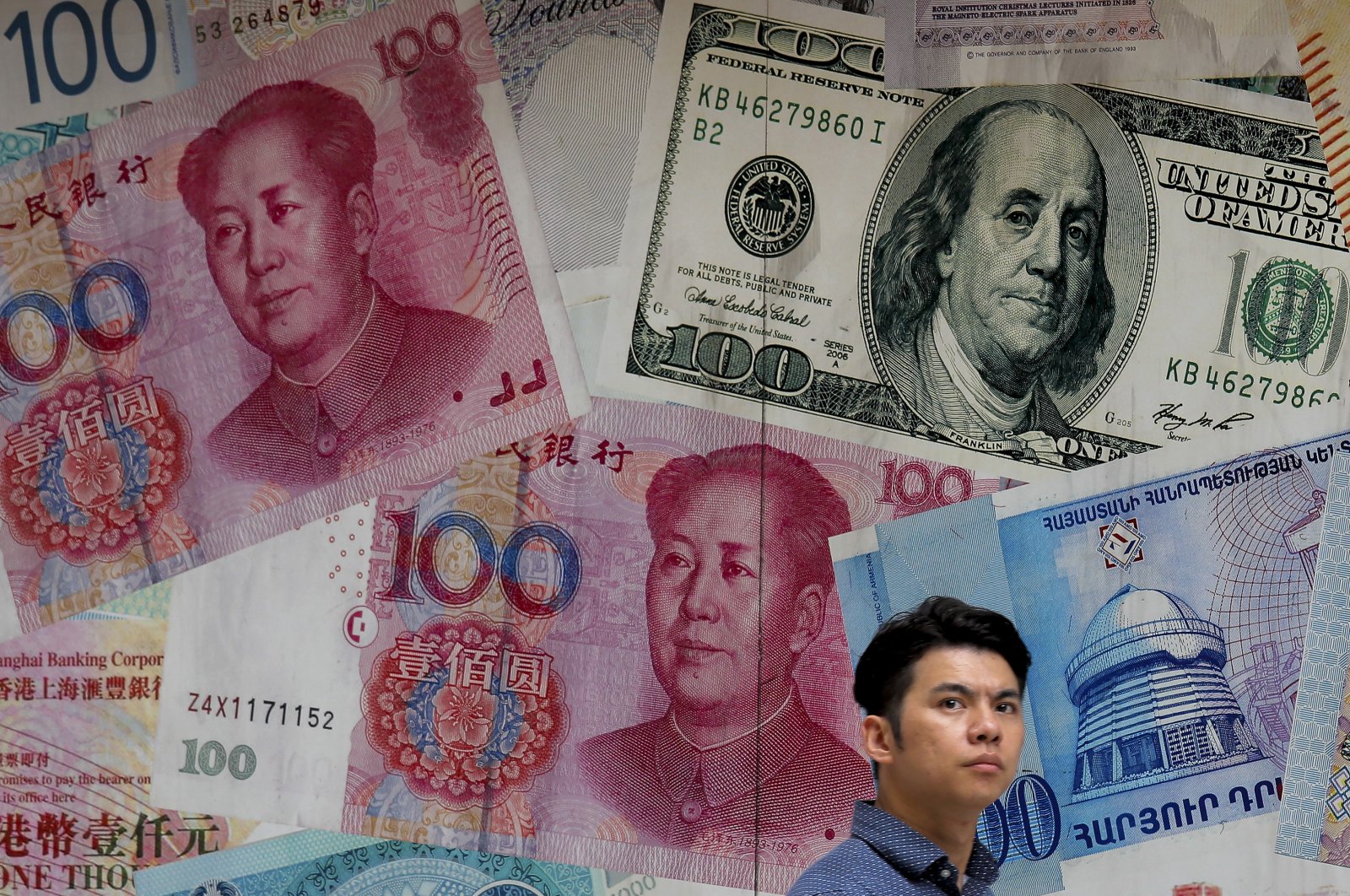 A man walks past a money exchange shop decorated with different banknotes at Central, a business district in Hong Kong, Aug. 6, 2019. (AP Photo)
by Kerem Alkin Apr 25, 2020 12:05 am
RECOMMENDED

Two possible scenarios are likely to manifest themselves in the aftermath of the global coronavirus outbreak. The first of these is expressed by analysts and think tanks at both a national and international level – namely that the pandemic was initiated in China as an operation aiming to bring a shift to the "globalist institutional order," to transform the country into the main provider of the world's raw materials, and intermediate and final products as it rapidly eliminates the effects of the pandemic.

Hence, conglomerates, companies, investors and banking families counted among the corporate network of the established global order since the late 1990s may start to see that the U.S. is too cumbersome to be the flagship of the kind of global system that they seek to control. Furthermore, they may be put off by its aging population and ever-more-restrictive immigration policy – especially in contrast to China, which has lifted its "one-child policy" and presides over a population surpassing 1.4 billion people. If China is selected as the new flagship, it will surely come out of this global virus outbreak stronger than ever. After all, a number of historians, analysts and think tanks claim that the same globalist order was, in any case, both the financier and supporter of the communist revolution in China.

The second scenario is, on the other hand, a new "Pearl Harbor" operation. The Atlantic Act, reached between U.S. President Franklin D. Roosevelt and British Prime Minister Winston Churchill on Aug. 9, 1941, is considered as the United Kingdom's recognition of the United States as the new leader of the capitalist system and of the Atlantic Alliance. The Atlantic Charter, announced on Aug. 14, 1941, with the signing of the two leaders, essentially introduced the current global economic and political system – not to mention a trading system based on liberalization. However, the U.S. was not initially involved in World War II, with more than 50% of the U.S. population seeking no involvement in another new bloody venture.

It is claimed that U.S. naval intelligence reported that a major Japanese naval force was approaching Pearl Harbor, one of the U.S.' most important naval bases in the Pacific. However, it is thought that the White House did not respond to this warning specifically in order to bring the U.S. into World War II. After the attack on Dec. 7, 1941, over half of the American public approved the idea of going to war. So then, are we facing a second Pearl Harbor?

An article published by Business Insider on April 8 states that the U.S. Army and National Medical Intelligence Center received intelligence from their headquarters in Asia that a potential coronavirus outbreak carried the risk of turning into a global disaster.

If this is so, then how was the U.S. caught off guard to such a rapidly spreading global virus pandemic? Or did it choose to be caught off guard? The tactic has the advantage, after all, of shoring up international support – led by the U.S., England and France, even if Russia potentially weighs in with support – to demand heavy compensation from China. Will they try to balance China’s claims over global trade or pressure it to scale back in its military structure in the South China Sea and Asia-Pacific region? Will China be forced to commit to buying more than $400 billion worth of goods from the U.S. instead of $200 billion? Will the U.S. refuse to lose its flagship status to China? Pay close attention to the cover of The Economist this week. Is it a rising sun or the coronavirus germ pictured rising from behind China? Will the ships and planes pictured be opening the world up to China or fleeing from it?

The beginning of the end

Let me tell you in advance, between 2024 and 2025 at the latest, the world will see global oil prices stabilize at the level of $20 before ushering in a period where these will dip even further below. For another fossil-based fuel, coal, this fracture began in 2015. Oil will follow. Afterward, we will witness that the dependence on natural gas will also see a decrease between 2050 and 2060. Therefore, with 2020, our bidding farewell to oil is underway. So, how has negative pricing for oil contracts occurred since last Monday?

Initially, the main objective of the spot, daily and future buying-selling contracts, was physically aimed toward the delivery of barrels of crude oil. However, toward the end of the 1990s, professionals and global speculators on the global financial market discovered a field of commodity contracts and began to speculate on commodities, which are raw materials, and commodity buying-selling contracts as if they were not speculating enough with stocks and bonds. Over the last 10 years, 98% of investors who purchased futures for oil bought them for speculation; only 2% was able to do any real physical trading.

Therefore, for the first time in history, oil prices dipped into the negative for May contracts, to the panic of speculators who have no business in oil. As oil prices will stay at around $20 in the daily market after this, oil-importing countries such as China, Japan, South Korea and Turkey will naturally reap benefits. A recovery in oil prices seems difficult until concerns about the coronavirus outbreak diminish.