What will Russia do now in Idlib? 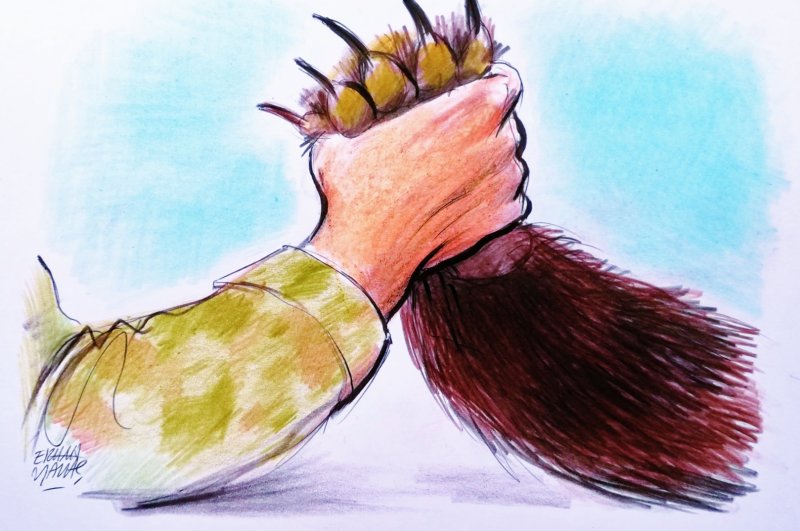 Since Feb. 10, as part of Turkey’s latest operation in Syria, namely Operation Spring Shield, more than 3,200 troops of Bashar Assad have been neutralized by the Turkish Armed Forces (TSK) in Idlib. The city is the last stronghold of the Syrian opposition and the refuge of around 3 million Syrians who were forced to flee their homes during the civil war. The name of the operation was announced by Defense Minister Hulusi Akar on Sunday, March 1, as time ran out after President Recep Tayyip Erdoğan warned the Syrian regime to withdraw behind the previously agreed boundary of the Sochi agreement signed by Erdoğan and Russian President Putin in September 2018.

On Sunday, Akar gave the details of the counteroffensive operation and said that TSK had destroyed two jets, two drones, eight helicopters, 135 tanks and five air-defense systems of the Syrian regime. The operation, which is intended to end the war and stop another Syrian regime offensive that was killing hundreds and displacing hundreds of thousands of Syrians, is still going on with no signs of slowing down. Every day, the number of destroyed airplanes, drones, tanks, air-defense systems and other military vehicles is increasing along with the number of neutralized troops.

Since at least 34 Turkish soldiers were killed and dozens were injured on the night of Thursday, Feb. 27, we are witnessing one of the biggest escalations of the Syrian war, which has been ongoing for nine years. “Despite warnings after the first strike, the Syrian regime unfortunately continued its attacks, even targeting ambulances,” Akar said Friday. Turkey’s retaliatory attacks killed 309 regime troops that night alone, in addition to destroying five Syrian regime choppers, 23 tanks, 10 armored vehicles, 23 howitzers, five ammunition trucks, a SA-17, a SA-22 air defense system and three ammunition depots. Turkey’s retaliation has not only shocked the regime but also fixed the whole world's attention on Idlib.

In the meantime, Turkish air support has helped Syrian opposition forces gain ground in northwestern Syria after big losses since December. Turkey has already started to deploy troops and artillery in Idlib, but after last week, dozens of unmanned aerial vehicles (UAVs) along with heavy artillery were deployed in the area. Opposition forces started to take back territories they lost in northwestern Idlib during the advance of the Syrian regime backed by Russia and Iran.

Opposition groups, along with the Syrian National Army (SNA) backed by Turkey, took control of more than 13 villages in the Jabal al-Zawiya area in the south and arrived at Kafranbel. Kafranbel is the symbolic city of the Syrian revolution which was taken by the regime on Feb. 25. Meanwhile, in eastern Idlib, the opposition took control of the strategic town of Saraqib, which was lost to the regime forces, Iran-backed militias and some Russian forces and mercenaries two weeks ago. The regime tried to take back the city with a new counteroffensive entering the town from the east, but it had to withdraw after heavy losses on Monday night. It seems that the regime forces will try to take control of the city again.

How did we end up here?

On Feb. 10, seven Turkish soldiers and one civilian were killed in shelling by Syria’s Assad regime forces near Saraqib, the flashpoint town located close to a Turkish observation point. In retaliation, 54 targets were hit and 76 regime troops were neutralized by Turkish shelling in the region.

The Syrian regime entered the strategic southwestern town of Saraqib after it took Maarat al-Numan, located some 32 kilometers away from the city center of Idlib, under the cover of heavy airstrikes by Russia at the beginning of February. While both towns sit on the Damascus-Aleppo M5 highway and Maarat al-Numan is the second most populated town in Idlib province, Saraqib is also near the junction of the key M5 highway and M4 highway.

Following the capture of Maarat-al Numan, the regime advanced toward the M5 highway. In order to take control of the highways, the regime continued its advance and did not hesitate to kill hundreds of civilians since December and displace at least 600,000. A Jan. 12 cease-fire deal between Turkey and Russia did not stop the regime’s campaign and at least 1 million Syrian refugees are now waiting at the gates of the Turkish border.

The regime was coming closer to Saraqib earlier in February, and the TSK had to increase its posts and send reinforcements, as three more Turkish observation posts came under siege in the northwest of Idlib. The recent regime advances put Turkish troops in danger again.

The Assad regime attacked Turkish regime forces on Feb. 3 and killed five Turkish soldiers. Before that, the Syrian regime airstrikes hit positions in Morek near a Turkish convoy on Aug. 19. Following the increase in threats from the Assad regime, deployment of Turkish forces began on Aug. 19 to keep the supply routes open, to ensure the safety of Turkish observation posts and to prevent further loss of civilian lives in the region. The Turkish observation post in Morek, a city in southern Idlib, is strategically important as it is close to Khan Sheikhoun, a town in Idlib. Along with Khan Sheikhoun, both towns are near the M5 highway. After taking Khan Sheikhoun, the next target of the regime would obviously be Maarat al-Numan.

Turkey has 12 observation posts along the Idlib border under the Astana agreement, which was reached between Ankara, Moscow and Tehran in September 2017. Also, Erdoğan and his counterpart Putin agreed on Sept. 18, 2018, to establish a demilitarized zone in Idlib province that would be around 15-20 kilometers wide. Despite those agreements, the Syrian regime hasn't stopped attacking southern Idlib, escalating violence gradually since the end of 2018, and recently increased its deliberate attacks toward Turkish positions.

That said, the airstrike in August was not the first targeting of the Turkish military or official personnel in Idlib. On June 27, the Syrian regime hit an area located near a Turkish observation post in the Zawiya region with artillery and mortar fire twice in two hours. One Turkish soldier was killed and three others were wounded during the shelling. That was the sixth such attack near a Turkish observation post, in addition to those on April 29, May 4, May 12, May 31 and June 8. However, recent attacks have been getting more worrisome by the day.

The escalation marks a rare confrontation between Turkish and regime forces. As I previously wrote in this column, Feb. 10 signified the beginning of a new era in Syria. This was a big breaking point that signaled that the structure of clashes in Idlib would change. The clouds had arrived, and the storm was about to come. The 10th attack of the Syrian regime in which at least 34 Turkish soldiers were killed was the final straw.

After the Feb. 10 regime attack, the Turkish president had said, “Nothing can continue like this where Turkish soldiers’ blood is spilled,” warning the regime’s allies, who are also guarantors under the Astana process, and giving a deadline for Damascus to withdraw its forces behind the borders agreed under the Sochi agreement. Instead of working toward a de-escalation zone, on Feb. 27, the regime forces shot their bolt and all hell broke loose. What the Assad regime dared to do is a game-changer in Syria.

An exodus has already shaken the region. The fast-moving advance of regime troops once again forced hundreds of thousands of Syrians to flee and pushed them toward the Turkish border to escape the fast-moving advance of regime troops. That is a national security matter for Turkey that already hosts around 4 million Syrian refugees. In addition to that, the regime’s deliberate attacks that killed 56 Turkish soldiers forced Turkey to take the situation into its own hands.

Even though Russia is the leading guarantor state for the regime and is the only country that can prevent the regime and Iran-backed militia attacks, Russia has shifted its position and that made the regime bolder. The Syrian regime flew into a fury because of the Sochi agreement signed by Russia and Turkey in September 2018 and has violated it from the start. It launched its Idlib campaign in December 2018 and was expecting support from Russia. Over 3 million civilians have been stranded in the city since they took control of the province.

It was obvious that this kind of support would jeopardize the Sochi deal. Russia overlooked the Assad regime’s violations; however, it did not provide active support until April 2019.

The Sochi agreement on Idlib gave Moscow a chance to play a new foreign policy game with Ankara too, which has disturbed Turkey's NATO allies. This deal brought Moscow and Ankara closer than before on different matters, such as the S-400 deal and TurkStream and other bilateral and military cooperation deals. The regime was facing heavy losses and was not able to advance without Russia’s support. However, with Moscow’s stance shift, the regime started to gain territory and Idlib became an area where Russia and Turkey arm-wrestled, although they eagerly continue to work together on other issues. Ever since, Russia has been trying to push Turkey into a tight corner. In response, Turkey increased deployment, sent troops, supplied anti-tank and grad missiles to opposition groups against the regime and made it clear that it would protect its interests in Syria. The preparations of Turkey for Idlib were much more than its previous ground operations in Syria, where it cleansed Daesh and the PKK’s Syrian offshoot YPG from its border. This was a sign that Turkey would not step back. And yet, Russia has underestimated Turkey’s determination and capabilities.

In order to find a solution to deescalate the tension in Idlib and go back to the terms of Sochi agreement, on Feb. 22, President Erdoğan offered his Russian, French and German counterparts to meet, but the Kremlin said that “Vladimir Putin had no plans for” the meeting in question. The Kremlin also implied that Putin was reluctant to meet Erdoğan alone. Probably, Moscow was not expecting such a huge retaliation from Turkey. Last week, the Kremlin changed its position and today Erdoğan and Putin are meeting in Moscow.

What will Putin do now?

Turkey has already launched Operation Spring Shield against the regime elements and reiterates that it has no intention to face Russia on the ground. So, as I asked in this column a couple of times before, I repeat the question: What will Russia do? What will Putin do?

The regime forces cannot advance without Russia’s support and Turkey is insisting that the regime has to obey the terms of the Sochi agreement and Astana process.

Will Putin throw the Astana de-escalation zone and the Sochi demilitarized agreement into the trash, ignoring the lives of 3 million civilians? Will he choose the easiest way and continue to bombard Idlib as he did in other parts of Syria where Russia supported the Assad regime? Threatening Ankara with torpedoing Idlib had already put maximum pressure on Ankara and made it show its strength. Will Russia continue to support the regime’s Idlib offensive? And more importantly, will Putin take the risk of an all-out war and face Turkey on the ground?

Disregarding Turkey’s national security would damage the relationship between the two countries. Will the Kremlin say "all-in," jeopardize everything it gained in Syria and pave the way for a new war, which would turn into a regional, maybe a global war?

Does Putin want to do that?

To be honest, Moscow seems to have no choice but to come to an agreement with Ankara and withdraw the regime behind the borders of the demilitarized zone agreed to in Sochi in September 2018. Otherwise, Ankara will do what is necessary for its national security and interests. Ankara has shown that what it has done since Feb. 10 is just a start.