Where will Greek officials stand trial? 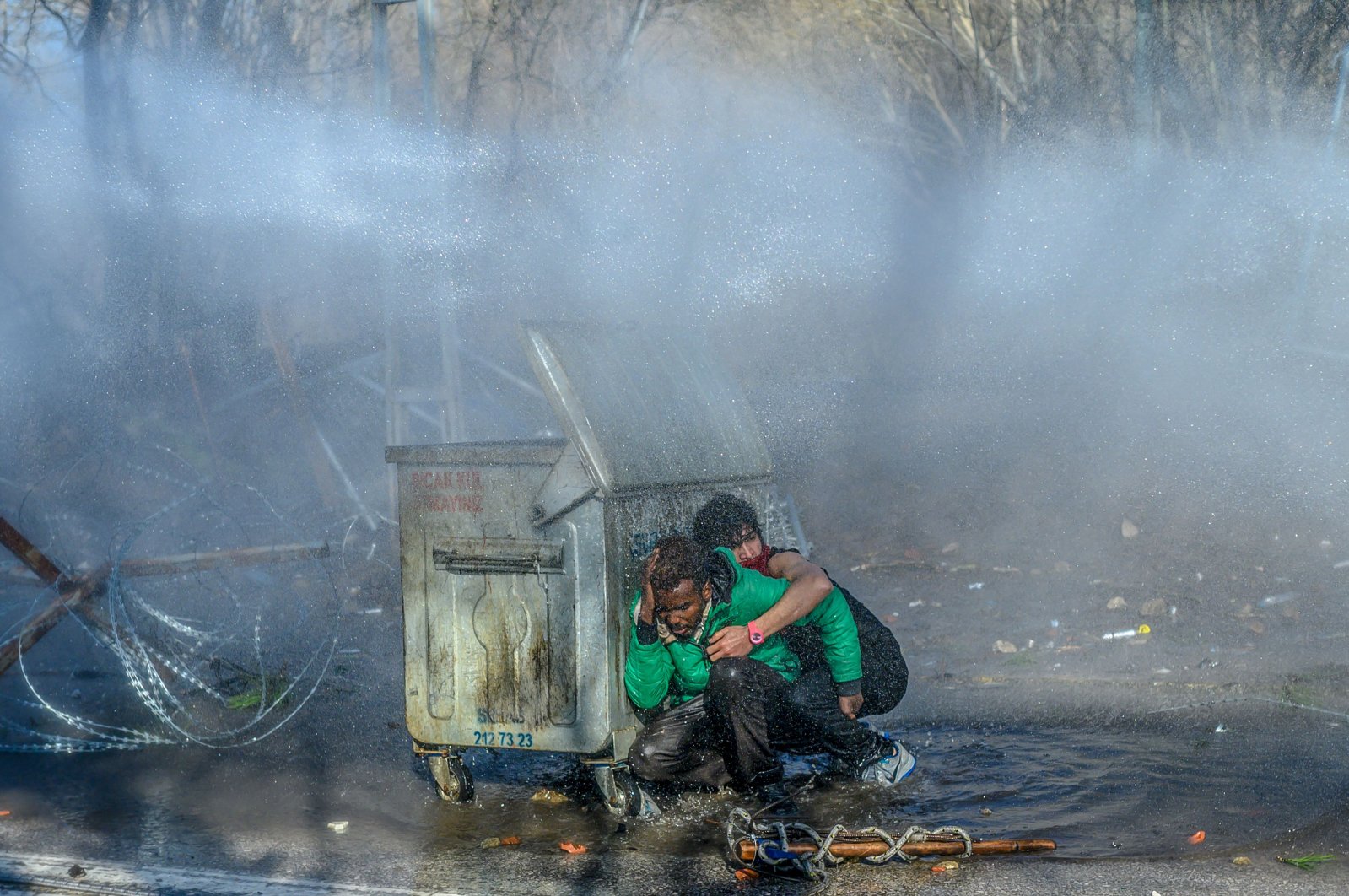 Migrants take cover behind a trash container as Greek police use water cannons to block them trying to break fences in the Turkey-Greece border province of Edirne, March 7, 2020. (AFP Photo)
by Yahya Bostan Mar 08, 2020 10:34 pm
RECOMMENDED

Three decades have passed since the Berlin Wall fell in 1989. The 2000s, the height of globalization and liberalism, when national borders were supposedly going to disappear, started just 20 years ago. Over the last decade, however, the world has experienced extraordinary decay. International law, humanitarian principles, ethical values and the international community have all but vanished. We do not live in the digital age, as some people claim – we live in an irrational, unethical and selfish time, under the domination of digitalization. Our self-centeredness leads us to ignore the plight of others. We shut our eyes in the face of human suffering. We claim to be sorry about dead babies washing up on our shores, but chase refugees with sticks on beaches.

For a long time, the bloodshed in places like Syria, Iraq, Afghanistan, and Libya was something the West watched on television. The European Union, in particular, has been working hard to distance itself from those crises and keep their victims at arm’s length. Yet two recent developments brought all those conflicts to Europe’s doorstep.

The story is all too familiar: Turkey has been hosting some 4 million Syrian refugees for years. The country’s humanitarian efforts, involving free education, health care and civilian infrastructure for asylum seekers, cost nearly $40 billion. To be clear, the world sings Turkey’s praises when it comes to humanitarianism, without doing more themselves.

Turkey and the EU have been engaged in diplomatic talks for some time. The Europeans made many promises to Ankara without necessarily keeping them.

In recent weeks, the Bashar Assad regime launched an offensive to seize control of the final opposition stronghold in Syria, Idlib. It proceeded to conquer a significant part of Idlib, home to 4 million civilians, mounting pressure on the Turkish border.

Secondly, the Turkish government took a step it had been advocating for a long time. It announced that the Turkish authorities would no longer stop refugees en route to Europe and effectively opened the floodgates. Turkey said no asylum seeker was required to leave, but it would not keep anyone seeking to leave. Over several days, some 140,000 people crossed the Turkish-Greek border to enter the EU.

The brutality that refugees have experienced at Europe’s eastern border deserves special attention. The Greek police have beaten, stripped naked and robbed some of the asylum seekers. The international media has published countless images and video footage documenting the torture of refugees.

To make matters worse, Greece fired live bullets on unarmed asylum seekers, killing no less than four civilians in the process. It also encouraged Greek farmers near the border to "hunt" immigrants, as armed men fired at families from atop their tractors.

Despite such gross violations of international law, a large number of refugees have made their way into the EU via the Maritsa river. Some reporters even interviewed asylum seekers as far as 300 kilometers away from the Greek-Turkish border.

The socio-economic impact of this latest wave of irregular migration on Europe remains up for debate. The Greek government’s ruthlessness, lawlessness, and ill-treatment of refugees, however, deserves special attention.

Athens is committing a crime with the world watching. Its actions violate Article 14 of the Universal Declaration of Human Rights, the 1967 Protocol on Relating to the Status of Refugees, and several other U.N. resolutions and EU laws.

The question still begs to be answered: Where would the Greeks stand on trial if we lived in an age of law – rather than these irrational times?