Who was the 'Ottoman padishah'? 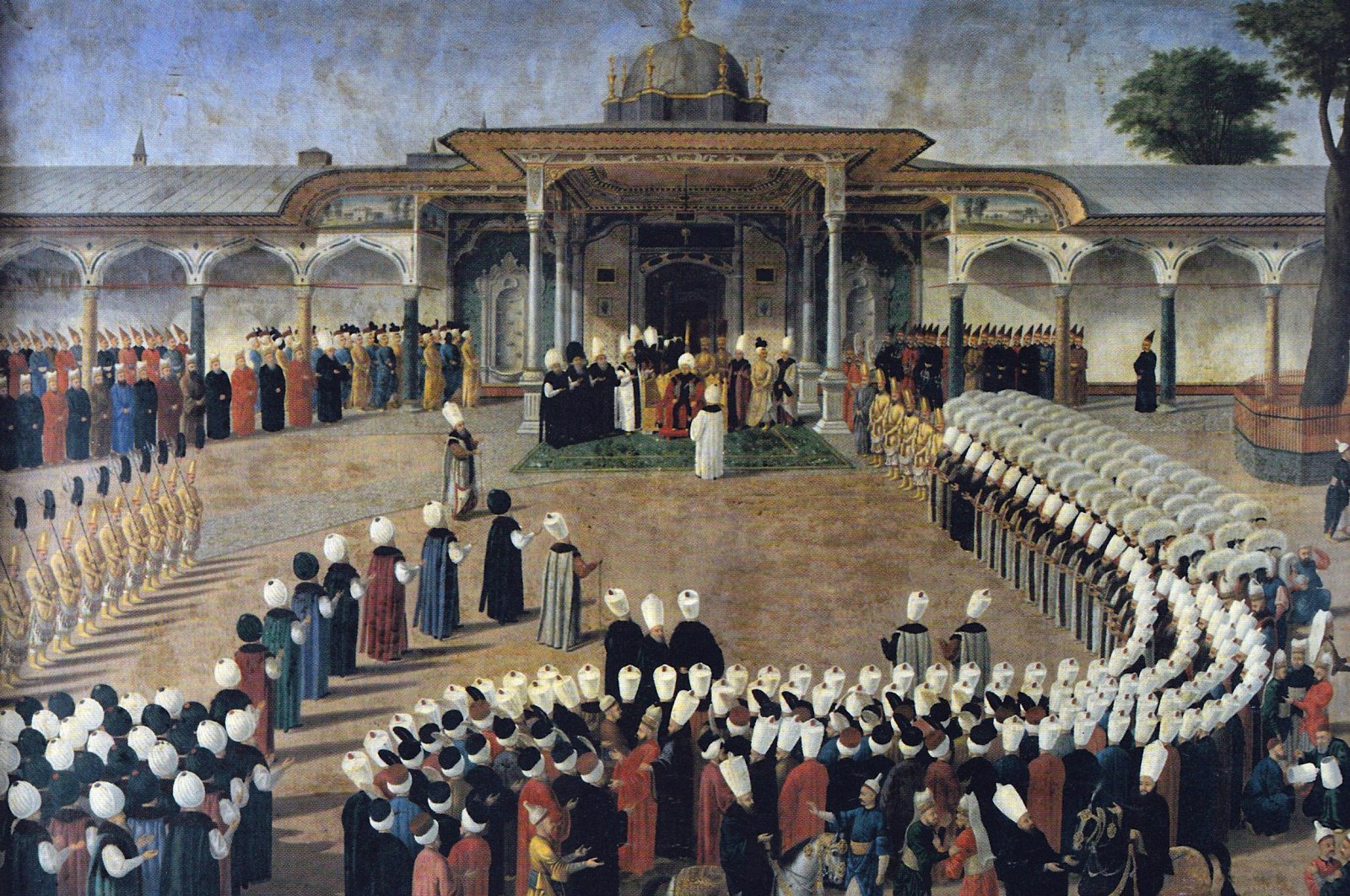 Selim III receives dignitaries during an audience at the Gate of Felicity, Topkapı Palace in the Painting by Konstantin Kapıdağlı, 1789. (Wikimedia Photo)
by Ekrem Buğra Ekinci Sep 17, 2021 12:05 am

The Ottomans, who came to Anatolia with a tribe of 400 tents from Turkistan, established Anatolian unity within a century and became the direct successors of the Seljuks. Over time, they built an empire that ruled over three continents

Of course, the answer to this question is not as simple as the sentence, "The sultan was the head of the Ottoman Empire." The Ottoman Empire was founded as a border principality in 1231 by tribes belonging to the Kayı clan of the Oghuz Turks, who came to Anatolia after the Genghis invasion and were placed on the Byzantine border in Western Anatolia by the Seljuk sultan.

Ertuğrul Ghazi (1191-1281), the head of this principality – equivalent to the marquis in European feudalism – and later his son Osman Gazi (1258-1324) were both known as beys (prince). Thirty-six Ottoman sultans, who were Ertuğrul's descendants, ruled over the empire until it was terminated by the Ankara movement in 1922.

These sultans were all from the same dynasty. The lineage of this Ottoman dynasty goes back to the legendary ancestor of the Turks, Oghuz Khan, whom historians say was the same person as the Hun ruler Mete (who died in 174 B.C.). A ruler whose lineage is not based on Oghuz Khan is not considered legitimate in Turkish political tradition.

In 1288-1289, the Seljuk sultan sent a tug (a pole with horse or yak tail hair arranged in a circular form which served as a Seljuk flag), a tabl (a traditional form of drum) and a firman (edict), the symbols of the dominance of his margraves, to Osman Ghazi. Thus, Osman Ghazi would become a direct subordinate of the Seljuk sultan in Konya, therefore, of the Mongol governor who occupied Anatolia and resided in Tabriz and by this means, of the Mongol/Chinese ruler in Beijing as well.

On Jan. 27, 1300, after the Seljuk Sultan Alaeddin Keykubad III was imprisoned by the Mongol ruler Gazan Khan, the commanders pledged allegiance to Osman Ghazi as the ruler. During the reign of Sultan Abdülhamid II, this event was accepted as the founding date of the Ottoman Empire.

The Ottomans became the direct successors to the Seljuks by establishing Anatolian unity within a century and a half.

Titles such as padishah, sultan, khan, haqan, amir al-mu'minin and caliph always refer to the Ottoman ruler. Empire means a multiethnic, multilingual, multireligious, multisectarian and multicultural society. This is a fascinating part of history when you think about it. The Ottoman ruler united four different cultures and four different state traditions under his authority: Khan, sultan, padishah and kaiser.

Padishah is a very old Persian word meaning great shah (emperor). It shows that the Ottoman ruler was the ruler of the legendary Turan country in Persian mythology. The word shah alone represents the ruler of Iran. Although the Ottomans used the title of the sultan for the rulers of India and some other Muslim countries, from the time of Sultan Murad II, the term usually refers to the Ottoman ruler.

Beginning with the second sultan, Orhan Ghazi, the Arabic word sultan was used before the name, with the Turkish word khan used after it, such as in Sultan Mehmed Khan. Khan (han) has passed from ancient Chinese to Turkish and means shah (king).

The title of haqan, which comes from the Mongolian word "kaghan" and indicates that the Ottoman sultan was sitting on the great Turkish throne at the same time, was the only term used for the sultan, especially in the empire’s last years; no names were used before or after this title.

The Ottoman sultans used the title "Sultan-ı Iklim-i Rum" (Sultan of Anatolia and Rumelia) since the reign of Yıldırım Sultan Bayezid. Some historians accept that the Ottoman sultans were also "Kaiser-i Rum" (the Roman emperor) after Mehmed II’s conquest of Istanbul.

The Ottoman sultan was the caliph of the world's Muslims for four centuries since the conquest of the Hijaz in 1517. In some official documents, the expression “amir al-mu'minin” was also used for the sultan.

The Ottoman sultan was also the ruler of many governments. The most important of these governments, which were dependent on the sultan and paid taxes between various long and short dates, were as follows:

Europeans use the term "grand seigneur" (great master) for the sultan. In international correspondence, the term "emperor" was specifically declared for the sultan. Even after the end of the 18th century, the Ottoman sultan was called as such. Indeed, the phrase "Sa Majeste Imperiale le Sultan" (His Imperial Magesty the Sultan) or "Sa Majeste le Sultan Empereur des Ottomans" (His Majesty the Sultan Emperor of the Ottomans) is mentioned in the European documents of the 19th century. Until the beginning of the 17th century, the Ottoman sultan did not consider any ruler in the world to be equal to him in terms of protocol. For example, the Austrian emperor could correspond with the grand vizier.

When the princes reached the age of 12, they were sent to the sanjaks (administrative divisions) as governors at similar distances from each other. Of these, the first to reach the capital after the death of the sultan would be the ruler. From the end of the 16th century, only the eldest prince was sent to the sanjak. This prince was considered the heir apparent. After Sultan Mehmed III (1595), this practice was abolished and the princes were not taken to the sanjak as they were too young. They lived in the palace.

Sultan Ahmed I, the 14th Ottoman sultan who came to the throne in 1603, did not kill his brothers. When he died in 1617, bureaucrats chose his brother, not his son, for the throne. However, earlier, the practice was to hand the throne to the previous sultan's son. This procedure is called primogeniture.

Thus, a constitutional tradition was established that the eldest of the dynasty should be the sultan. With the advent of this succession order called seniorat, fratricide was prevented. However, since the old sultans came to the throne and remained in power for a short time, the political stability deteriorated. It was decided that the princes should not be made governors and they should live in the palace.

The Ottoman sultan was not different from other monarchs in appearance. However, he was weaker in terms of political and legal powers. Most importantly, the sultan was surrounded by the rules of

law that were set beyond his control and he could never change them. Most of them were the principles of Islamic law. Some of them were Turkish political traditions.

The sultan was only able to enact laws in areas not regulated by this law and in a way that did not contradict Islamic principles. He was just in charge of their execution. However, while using this authority, he had to comply with Islamic law and common benefit. Otherwise, he would lose his legitimacy. This was controlled by the ulama, an autonomous ruling class.

According to some historians, the first of the three most outstanding characteristics of the Ottoman sultans is their sensitivity toward obeying the law and traditions. This includes both principles of religion and protocol rules. The second trait is courage and the third characteristic is compassion.

As can be seen from various historical events, contrary to popular belief, the Ottoman sultan was never a despotic ruler. His power was not much greater than that of the European kings of the last century.

The sultan was the commander-in-chief of the armies. All of the first 10 sultans were military heroes and marshals. From the end of the 16th century, as in Europe, there was a shift in ruling style from soldier-oriented to statesman and diplomat type. Techniques and tactics were now more crucial than bravery and strength in wars.