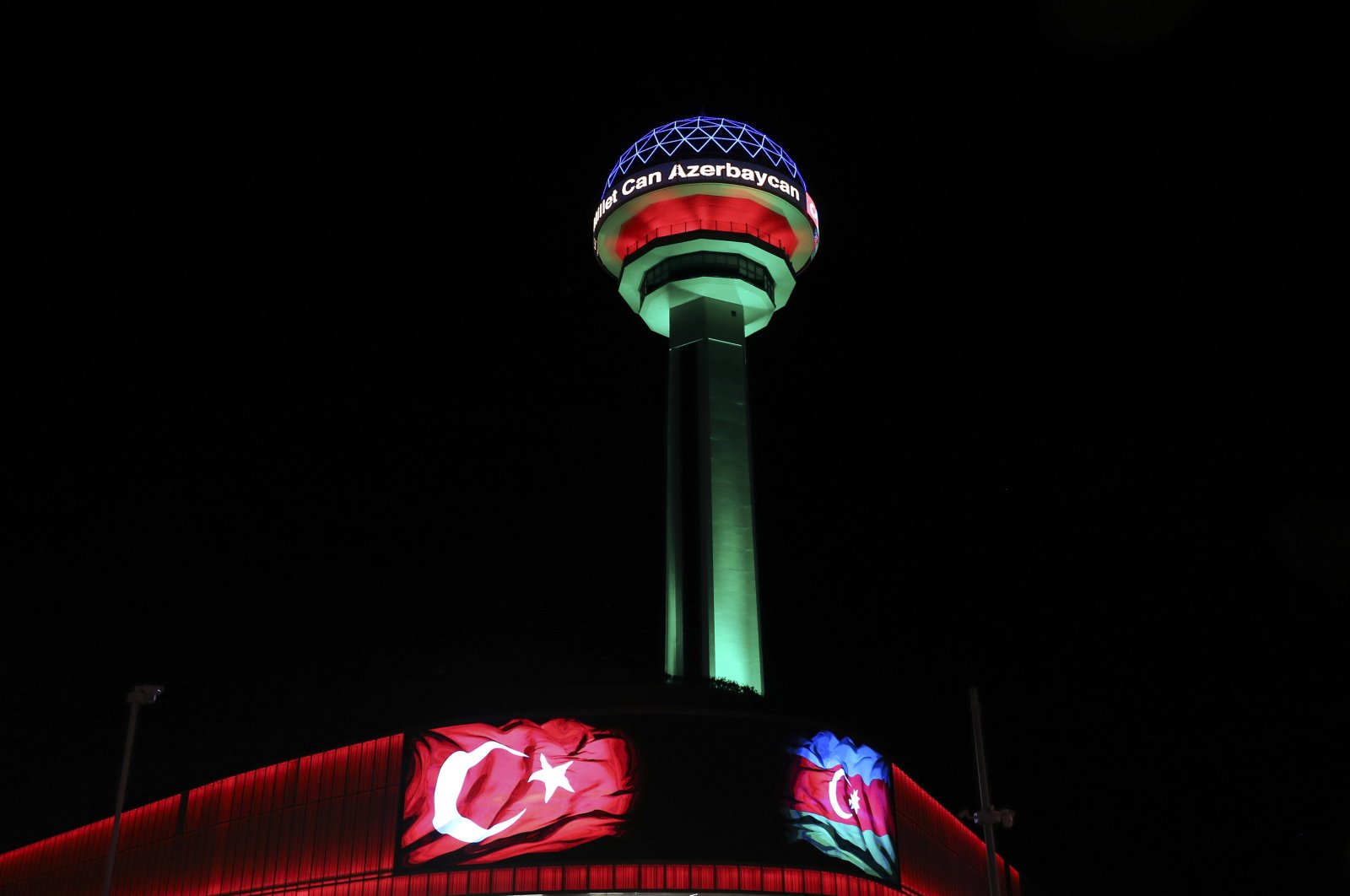 Ankara's Atakule shopping mall is illuminated by colors of the Azerbaijani flag in a show of Ankara's solidarity with Baku's struggle to regain the Armenian-occupied Nagorno-Karabakh region, Sept. 28, 2020. (AA Photo)
by Burhanettin Duran
Sep 30, 2020 12:05 am

Armenia engaged in acts of aggression in Nagorno-Karabakh, days after its attack on Tovuz in western Azerbaijan. That country opened fire on its neighbor’s civilian population on Sunday, which elicited a strong military response from Baku. A number of villages have since come under Azerbaijani control. It would appear that Yerevan made a huge miscalculation in the Caucasus and did not take seriously enough Turkey’s commitment to stand in solidarity with Azerbaijan.

That’s ironic because Azerbaijan had been bracing for a potential attack from the Armenians since the latter’s July 12 assault on Tovuz, a key energy corridor, some 100 kilometers (62 miles) away from Nagorno-Karabakh. Turkey’s top military minds, too, became involved through joint military exercises.

I doubt that the international community will allow the current clashes between Azerbaijan and Armenia to evolve into a long-term war. In addition to the United Nations and NATO, the OSCE Minsk Group called for a cessation of hostilities.

Going forward, the Minsk Group will likely mount pressure on both countries to resume negotiations. It is important to note, however, that Armenian aggression is the sole reason why the Minsk talks proved inconclusive and an armed confrontation remained the only option. Yerevan invaded a quarter of Azerbaijan’s sovereign territory back in 1991 and violated four U.N. Security Council (UNSC) resolutions ordering its withdrawal. Although a cease-fire agreement was reached in 1994, in the form of the Bishkek Protocol, the fact that Armenia still controls Nagorno-Karabakh and seven occupied Azerbaijani regions is unacceptable.

It is, therefore, clear that the dispute in the South Caucasus represents a ticking time bomb. Needless to say, countries like Russia, Turkey and France will compete against each other against the backdrop of the ongoing clashes.

It is quite interesting that fighting in Nagorno-Karabakh kicked off, as the situation in the Eastern Mediterranean de-escalated and Turkey and Greece prepared to engage in exploratory talks. That Russia may be trying to fuel violence in order to discipline the Armenians, who cozied up to the United States, immediately came to mind. Armenia immediately turned to Moscow for help – which suggests that the Russians got what they wanted.

Here’s the question: Why did Moscow, which never stopped seeing the Caucasus as part of its sphere of influence, encourage Yerevan to fight? Is Russia starting a new competition with Turkey in the region – after disagreements in Syria and Libya? Or do the Russians want Ankara to overreach by becoming a party to more and more conflicts? Or, perhaps, is this just a ploy to up the ante ahead of talks over Syria and Libya?

It is too early to answer those questions, but Moscow clearly assumes that the U.S., with the 2020 election around the corner, and the European Union will be ineffective. Once again, Russia demonstrates its ability to fuel conflict and violence to empower itself.

Will the Westerners, who watched Georgia, Ukraine and Belarus from the sidelines, keep their silence yet again, as Russia fills emerging power vacuums? It remains to be seen how influential the Armenian lobby will be in the United States ahead of the elections.

One thing is clear: There is a geopolitical vacuum, spanning from Libya and the Eastern Mediterranean to Syria and the Caucasus. The post-COVID world increasingly resembles the post-World War I uncertainty and power struggle. Washington’s partial retreat and the EU’s failure to devise a coherent foreign policy allows Russia to fill power vacuums.

Western leaders, who criticized Turkey for allegedly aligning itself with Russia, must notice that Ankara counterbalances the Russian influence in Libya, Syria and the South Caucasus.

It is time to observe the emerging world order’s geopolitical realities from the perspective of strategic interests and rationality – as opposed to ideology.