100th anniversary of Turkish-Russian ties: Time to talk more than ever 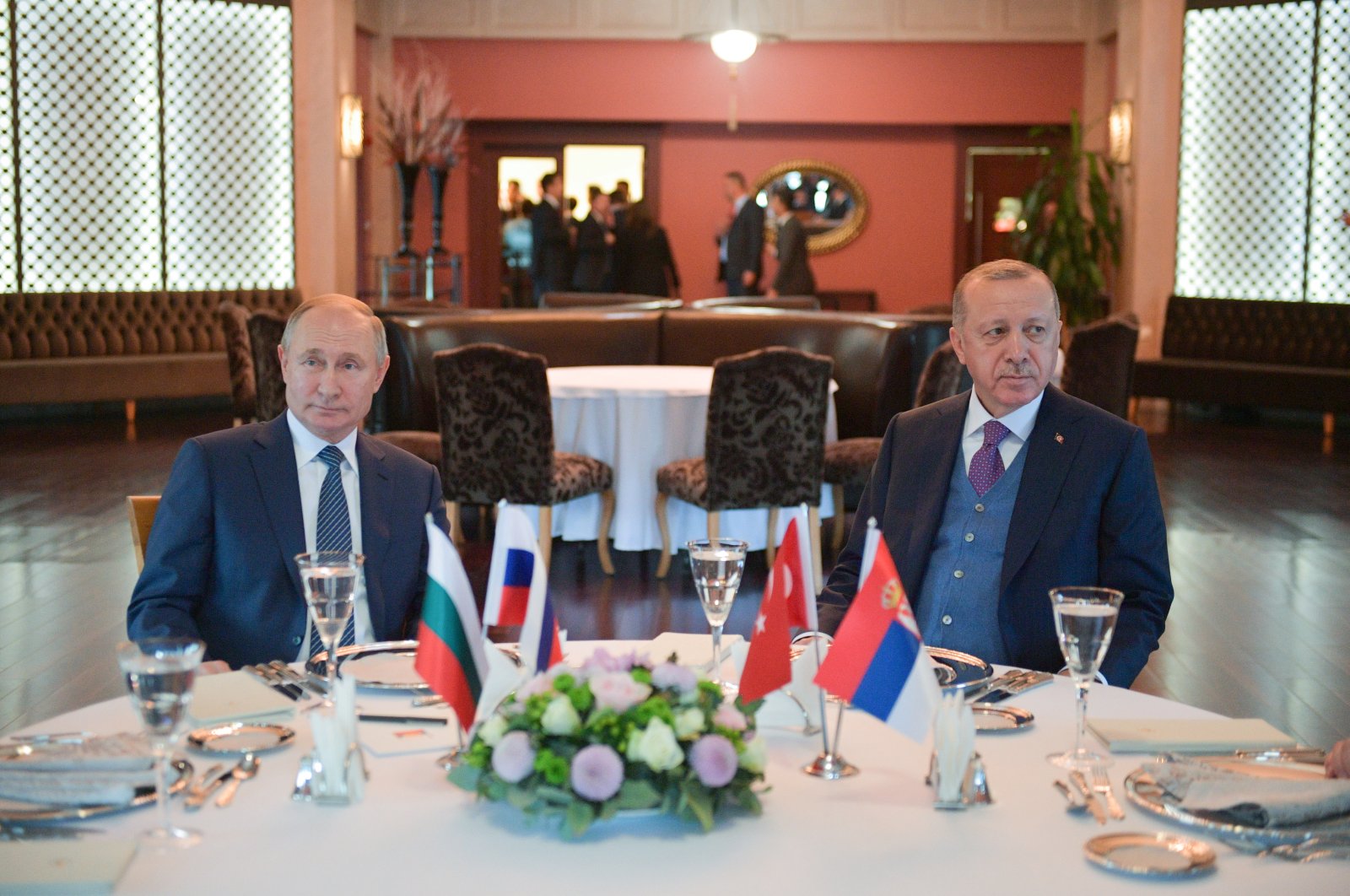 With ups and downs throughout the past century, Ankara and Moscow have managed to secure their relations and now have the potential to strengthen them further through mutual dialogue

Over the past years, Russia and Turkey have accomplished significant joint efforts in all possible areas: mutual trade, investment, tourism and humanitarian cooperation. Last year was declared the mutual Year of Culture and Tourism between the two countries. Moreover, June 3, 2020, marks one century since the establishment of diplomatic relations between Russia (as the successor of the USSR) and the new Turkish republic.

It is difficult to deny the fact that a lot has been done between Russia and Turkey in the 21st century.

The foundation of recent relations between the two countries has been the long-term strategic cooperation projects, such as the Akkuyu Nuclear Power Plant (NPP), the TurkStream gas pipeline and the delivery of the S-400 air defense system.

Let’s note that these are just the projects that everyone is hearing about. In addition to these, Ankara and Moscow are implementing many projects on a smaller scale. These smaller projects, which are not made public as widely but are nonetheless important, contribute to mutual “mega” initiatives for bilateral relations.

However, even when looking at a nice picture, it is sometimes worth asking inconvenient questions.

Does the level of bilateral relations achieved by Russia and Turkey meet the level of relations that should exist between two neighbors that are of such great importance for each other?

Does the level of relations achieved by Russia and Turkey match the potential that exists between the two countries with complementary economic profiles, which are therefore natural partners in a number of areas?

And, finally, why, both in Russia and in Turkey, do we start to hear “expert opinions” claiming that modern relations between our two counties are not strategic but tactical? So, according to them, in spite of all the joint strategical projects, our relationship is based on short- and medium-term interests, rather than long-term ones.

What the numbers tell us

If we look at the statistics on bilateral trade, the $27.3 billion trade volume between the two countries in 2019 is not only far from the goal of $100 billion set by our presidents but far even from its peak in 2008. Bilateral trade peaked at $38 billion in 2008, when the global economic crisis erupted across the globe, and until now, these figures could not be restored, for various reasons.

It looks like strategic projects, which are a showcase of relations, precede bilateral trade, which determines the intensity and strength of trade and economic ties.

Tourism from Russia to Turkey broke a record in 2019, exceeding 7 million tourists. Moreover, at the beginning of 2020, the Turkish tourism sector had ambitious plans to increase this high figure even more.

However, it is obvious that the ongoing coronavirus pandemic has “nullified” Russian tourism to Turkey for the time being. These days the Turkish tourism industry is doing its best to be able to reopen again for tourism, both domestic and international, without laying out any specific goal in figures.

From the other side, at the time of this writing, the coronavirus has not yet been brought under control in Russia. Russia itself is not ready to send its citizens to Turkey. Therefore, the business contacts between the two countries, even those that turned to modern online technologies, were noticeably reduced.

It turns out that the projects – the cornerstones of Russian-Turkish relations, including Akkuyu, TurkStream and the S-400 purchase – remain in place and will, in one way or another, be implemented further. However, bilateral cooperation, in a broader sense, has again been hit by negative external circumstances – the coronavirus pandemic.

Moreover, frankly speaking, even before the coronavirus outbreaks, only the meeting of presidents Vladimir Putin and Recep Tayyip Erdoğan over Syria's Idlib in Moscow on March 5, prevented Russian-Turkish relations from slipping into another serious political crisis with all the ensuing consequences for bilateral relations.

The good news is that the two presidents have once again reaffirmed their ability to find a mutually acceptable solution in difficult situations. A plus to modern Russian-Turkish relations is the high frequency of contact between Putin and Erdoğan. During the calendar year, they meet face-to-face and talk on the phone dozens of times.

What will happen when, inevitably, other leaders serve as the heads of our two countries? This is bound to happen in the near future. To be honest, this is one of the key questions for those who are professionally involved in Russian-Turkish relations.

On the 100th anniversary of diplomatic relations between Russia and Turkey, I least want to talk about pessimistic scenarios. However, both in Russia and Turkey there are those who say that after the era of Putin and Erdoğan, Russian-Turkish relations will come a period of stagnation. The negative scenario will be marked by steps back from the level reached by Russia and Turkey in the current era.

The fact that there is a certain probability for pessimistic scenarios in Russian-Turkish relations has two fundamental reasons.

The first is that in the West, there are many forces that consider developing Russian-Turkish cooperation as a threat to their national interests. However, if we look at our history, it has always been that way – decades and even centuries ago. So, we may say that this as an inevitable backdrop for Russian-Turkish relations.

The second reason is one with which both countries can and should work jointly: the difference in views between Russia and Turkey on the regional agenda in the Middle East. The most important front lines of these views are in Syria and Libya.

Let’s note that it was Syria that caused major crises in relations between the two countries in recent years. Those crises could not be stopped even by solid trade and economic and humanitarian ties between the people of two countries.

Moreover, there are other regions, including the Balkans, the Caucasus, the Black Sea and Central Asia, where the interests of Russia and Turkey intersect with each other and the countries compete for influence.

In the realm of science, they say that a correctly asked question already contains at least half of the answer. Let us try to ask the “correct question” about modern Russian-Turkish relations.

For me, it may look like this: What can we, as two peoples, do to make Russian-Turkish relations more durable and fruitful, and how can we protect them from possible future crises?

It seems to me that the simplest, but at the same time, the most effective way is to talk to each other directly as much as possible. Here, I do not mean communication during trips to each other’s countries, although any “microcontact” contributes to Russian-Turkish relations. In the end, the law of large numbers works here: Based on the more than 7 million Russian visitors to Turkey last year and more than 7 million “microcontacts,” the result is much more than “micro.”

I believe that we need to create a common, permanent space for Russian-Turkish dialogue in our media, both traditional and social, where prominent representatives of Russia and Turkey could meet and discuss: scientists, artists, thinkers, journalists, businessmen, ordinary citizens, etc.

In the past, in the final years of the Cold War, Soviet TV hosted a regular format of so-called “tele-bridges” between representatives of the USSR and the U.S. Nowadays, we know what is going on between Russia and U.S., but still, let's not underestimate the effect that those TV programs had at that time.

Perhaps, Russia and Turkey could use that forgotten experience today, in modern conditions.

After all, it is no secret that, despite globalization and close contacts among themselves, countries live in their own media spaces, as they did in the past.

Foreign voices, of course, reach the local public through the broadcasting of global media corporations and social networks. However, we are quite rarely talking about a full-fledged dialogue; more often this is one-way broadcasting.

Alas, most often, we see staged talk shows on our television screens, where, according to the scenario, the alternative point of view should be defeated at the end of the TV evening to the satisfaction of the local audience. It is extremely rare to see a genuine, thoughtful dialogue in which equal representatives of both sides participate and ask difficult and sometimes unpleasant questions. In this sense, the media mostly “protects” their audience from alternative stories and from alternative points of view.

It seems to me that this is the mission of the media in Russia and Turkey on the 100th anniversary of Russian-Turkish diplomatic relations. We need to remove the invisible barrier between us and ensure direct Russian-Turkish dialogue not only about our achievements but also about problems and disagreements.

Strategic projects, including the Akkuyu NPP, the TurkStream gas pipeline and the S-400 systems, are, of course, important. However, international relations emerge and develop between the people of two countries, not between projects.

We need to help people build a direct dialogue so that Russian-Turkish relations will be less dependent on who is currently leading Russia and Turkey. Relations would then become more stable, predictable and, ultimately, fruitful in terms of new cooperation areas and opportunities.

We have seen from our joint history that when the Russian and Turkish people talk among themselves, many things work out for them. Therefore, we must talk more than ever.

My congratulations to all readers on the 100th anniversary of the establishment of diplomatic relations between Russia and Turkey. Let’s talk more.