53 years of Israeli annexation of Jerusalem 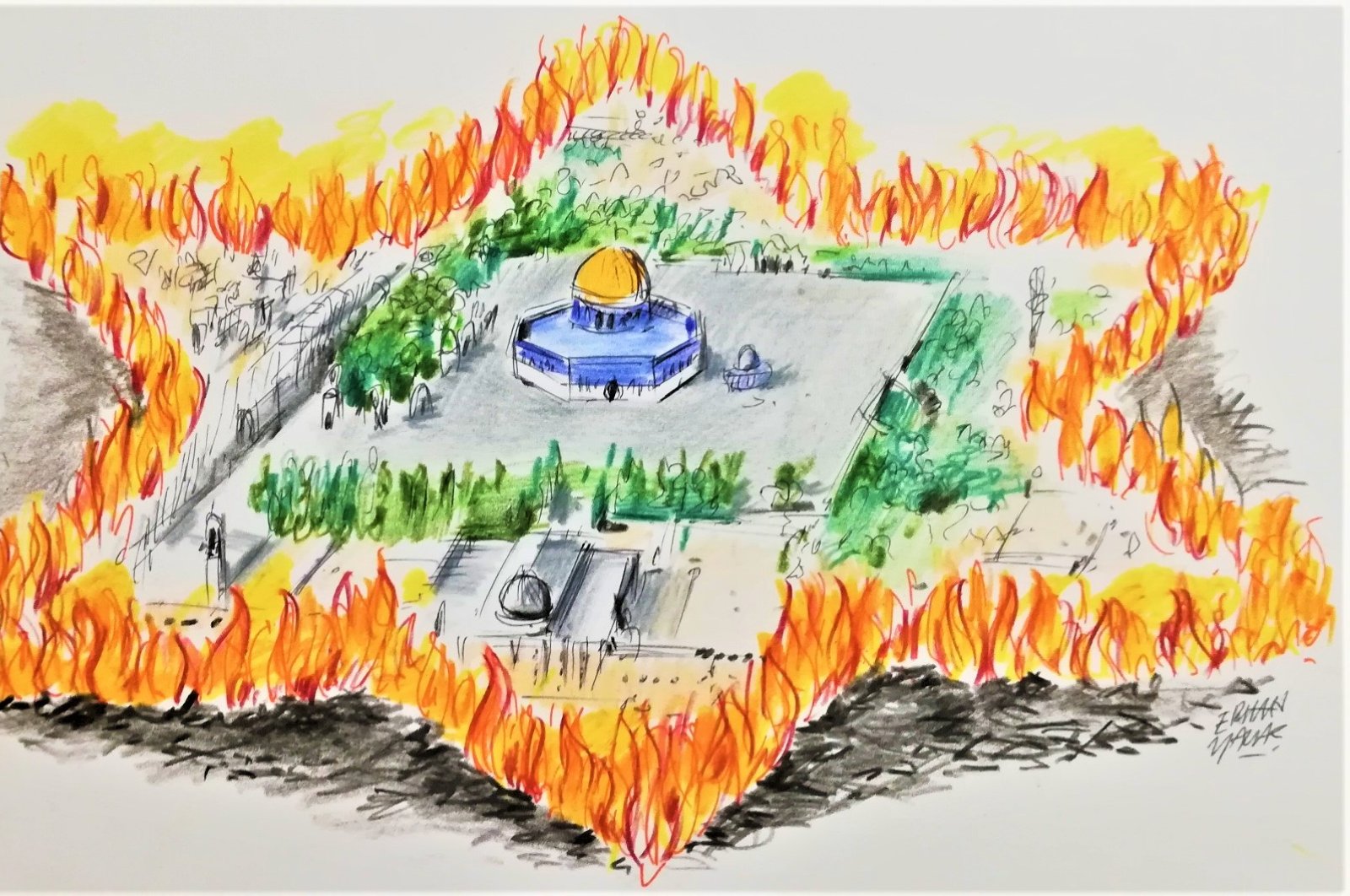 June 28 marked the 53rd anniversary of Israel's annexation of east Jerusalem, whose status remains one of the most sensitive and contentious issues of the Palestinian-Israeli conflict.

Ironically this anniversary coincides with Israel’s plan to annex large parts of the occupied West Bank and Jordan Valley.

Nothing about the Israeli government’s declared intention to annex parts of the Israeli-occupied territories is new or in the least bit surprising as the process started in 1967 with the gradual but systematic appropriation of lands for settlements and “military” purposes. It has never ceased.

Following the Six-Day War that year, Israel unilaterally annexed about 70,500 dunams (approximately 17,400 acres) of east Jerusalem and West Bank land to the municipal boundaries of West Jerusalem. In addition to the areas of Jerusalem that had previously been controlled by Jordan, approximately 6,500 dunams, the annexed lands included an additional 64,000 dunams, most of which belonged to 28 Palestinian villages in the West Bank. The remaining captured lands were within the municipal boundaries of Bethlehem and Beit Jala.

With this annexation, the total area of Jerusalem tripled, making it Israel’s largest city, both in territory and population. It is known today as “east Jerusalem.”

The demarcation of Jerusalem’s new municipal borders was based on alleged security concerns, the delineation of defensible borders, and demographic considerations that ensured a Jewish majority in the city. The principle at the base of these demographic considerations was “maximum territory and minimum population.” This translated into a practice of annexing as much territory as possible to the municipal boundaries, which could be used for building new settlements for a Jewish population, while at the same time excluding heavily populated Palestinian areas from the new boundaries.

In order to enable these changes and strengthen its hold over the annexed areas, Israel took several legal steps. On June 27, 1967, the Knesset adopted an amendment to the Law and Administration Ordinance, stipulating in Article 11B that “the law, jurisdiction and administration of the state shall apply to all the area of the land of Israel which the government has determined by order.”

The next day, June 28, 1967, the Israeli government instituted the Law and Administration Order that applied the “law, jurisdiction and administration of the state” to east Jerusalem. The Knesset then authorized the minister of the interior to extend the boundaries of any municipality to include any area designated by government order. Accordingly, the minister of the interior expanded the borders of what had been West Jerusalem to include the recently occupied sector of the West Bank.

Israel then, by proclamation under the Municipalities Ordinance, stipulated that the annexed territory was included within the boundaries of the Jerusalem Municipality.

This round of rapid enactment of legislation after the war concluded with the ratification of the Protection of Holy Places Law, which provided that “the Holy Places shall be protected from desecration and any other violation and from anything likely to violate the freedom of access of the members of different religions to the places sacred to them or their feelings with regard to those places.”

It seems that by enacting this law and demonstrating respect for places sacred to all religions, Israel tried to firstly alleviate possible international criticism it expected due to its annexation measures, and secondly reduce friction between the different communities in Jerusalem, which was important to help build support for continued Israeli control over the city.

According to the formal Israeli stance at the time, this newly enacted legislation did not amount to a claim of sovereignty over east Jerusalem. The United Nations, however, viewed the legislative measures as a thinly disguised maneuver, despite Israel's protestations to the contrary, and condemned the country for the de facto annexation.

The Israeli Supreme Court refrained, at that time, from stating plainly that the area of east Jerusalem had been annexed to Israel. Some judges, however, addressed the issue directly. In a High Court of Justice decision from 1969, Justice Binyamin Halevi asserted that following the aforementioned legislation “the united Jerusalem is an integral part of Israel.”

The Palestinians protested against the annexation policy with different measures and reactions. They considered it a breach of the U.N.'s conventions and resolutions and affirmed that it contradicted international law.

Teddy Kollek, the mayor of the contested city, said in 1968: "The object is to ensure that all of Jerusalem remains forever a part of Israel. If this city is to be our capital, then we have to make it an integral part of our country, and we need Jewish inhabitants to do that."

On July 30, 1980, the Israeli Knesset ratified the Basic Law on Jerusalem, officially annexing the pre-1967 eastern parts of the city of Jerusalem and illegally declaring it the eternal undivided capital of Israel, over which it exercised exclusive sovereignty. Besides legalizing the physical annexation of the lands occupied in 1967, the Basic Law also compels the Israeli government to give the city preferential treatment in the allocation of resources and funds.

Following each declaration of the annexation of east Jerusalem, the international community condemned and did not recognize the law.

This included the United Nations Security Council (UNSC) Resolution 242 (1967) that emphasized the “inadmissibility of the acquisition of territory by war” and called on Israel to withdraw its armed forces and respect the sovereignty, territorial integrity and political independence of all of the affected states.

After the second annexation in 1980, Resolution 476 and Resolution 478 were passed by the UNSC on June 30 and Aug. 20, 1980, respectively, to deal with Israel's expansion of east Jerusalem. Resolution 476, citing five previous resolutions and the fourth Geneva Convention, declared again that the "acquisition of territory by force is inadmissible," that it deplored Israel's "changing the physical character, demographic composition, institutional structure and the status" of Jerusalem and declared itself "gravely concerned" over forthcoming Israeli legislation regarding the city.

The resolution "reaffirms the overriding necessity to end the prolonged occupation of Arab territories occupied by Israel since 1967, including Jerusalem" and "strongly deplores the continued refusal of Israel, the occupying power, to comply with the relevant resolutions of the Security Council and the General Assembly."

Since east Jerusalem's illegal annexation, years have passed and Israel persists in strengthening its stranglehold, throwing out its legalistic and pseudo-administrative hooks at the land. The country's policy in east Jerusalem has been geared toward pressuring Palestinians to leave, thereby shaping a geographical and demographic reality that would thwart any future attempt to challenge Israeli sovereignty in the city.

Israel’s attempts to shape the demographic reality of east Jerusalem are concentrated in its land expropriation and building restrictions. While the Jewish neighborhoods of Jerusalem and the settlement blocs on its outskirts enjoy massive development and substantial funding, Israel goes to great lengths to prevent development in Palestinian areas. As part of this policy, since 1967 the state has expropriated more than a third of the land annexed to Jerusalem – 24,500 dunams, most of it privately owned by Palestinians – and built 11 neighborhoods on them, which it earmarked for Jewish inhabitants only. Under international law, the status of these neighborhoods is the same as the Israeli settlements throughout the West Bank.

With no land reserves for development, the Palestinian population in east Jerusalem, which has grown more than fivefold since 1967, remains confined within increasingly crowded neighborhoods.

At the same time, various Israeli authorities encourage hundreds of settlers to take up residence in the midst of Palestinian neighborhoods, driving locals out of their homes. Settlement pockets in east Jerusalem encircle the Holy Basin to the south, east and north and some are strategically located along main routes leading to the Old City.

Other pockets have been established within the Muslim and Christian quarters of the Old City.

According to Israeli nongovernmental organization Ir Amim, a total of approximately 2,800 settlers live within Palestinian neighborhoods in east Jerusalem.

East Jerusalemites have been subject to unceasing looting of their land, real estate and material and cultural heritage. The city has become the main target for building Jewish colonial settlements and infrastructure. The Palestinians in east Jerusalem are persecuted with the worst forms of colonization and discrimination policies in recent history.

Israel has maintained a regime that has literally paralyzed the Palestinian population’s ability to build their homes in the already small area allocated to them, which is only 13% of the area annexed right after the June 1967 occupation of the West Bank, including east Jerusalem and the Gaza Strip.

Palestinians in east Jerusalem are subjected to the Israeli tax system, despite an income gap that sits at 9 to 1, while Israel continues to neglect their basic infrastructure and public service needs.

On average, the Israeli municipality has allocated less than 10% of its budget to east Jerusalem’s residents who represent more than 37% of the population of the combined west and east parts of the city.

An Israeli National Insurance Institute report points out that more than 77% of Palestinians in east Jerusalem live below the poverty line, compared with only 23% of the West Jerusalem Jewish residents.

On Dec. 6, 2017, U.S. President Donald Trump declared Jerusalem the capital of Israel and announced plans to move the American embassy from Tel Aviv to Jerusalem. This move broke from U.S. foreign policy tradition, which it had for decades avoided in the absence of an Israeli–Palestinian peace agreement.

Trump’s decision eliminated international consensus on Jerusalem and contributed to the prejudging of an issue that was supposed to be addressed in the final negotiations between the two sides, potentially fueling more tension in the region.

Israel welcomed Trump’s decision and announced plans to build thousands of new housing units in settlements. Most likely, Israel will seek to put about 200,000 Israelis into east Jerusalem settlements, although their presence is illegal under international law.

Consequently, Israel aims to strengthen its actions by imposing new facts that prove its sovereignty over Jerusalem and make it difficult to overcome any future attempt to reach a settlement, as the change in the status quo after Trump’s decision will have a deep symbolic interpretation and will be considered a boost to Israeli jurisdiction at the expense of Palestinian rights in the city.

At the heart of the matter is Israel's refusal to comply with General Assembly resolutions, expressing its defiance with arrogant contempt for the U.N. body's very existence and for the intelligence of its members. This behavior has become the hallmark of Israel's attitude toward the United Nations.

Today, the city’s status remains disputed, as Palestinians want east Jerusalem to be the capital of their future independent state, while Israel wants an integral Jerusalem to be its eternal capital.