A first lady who speaks of peace but prefers war: Anna Hakobyan 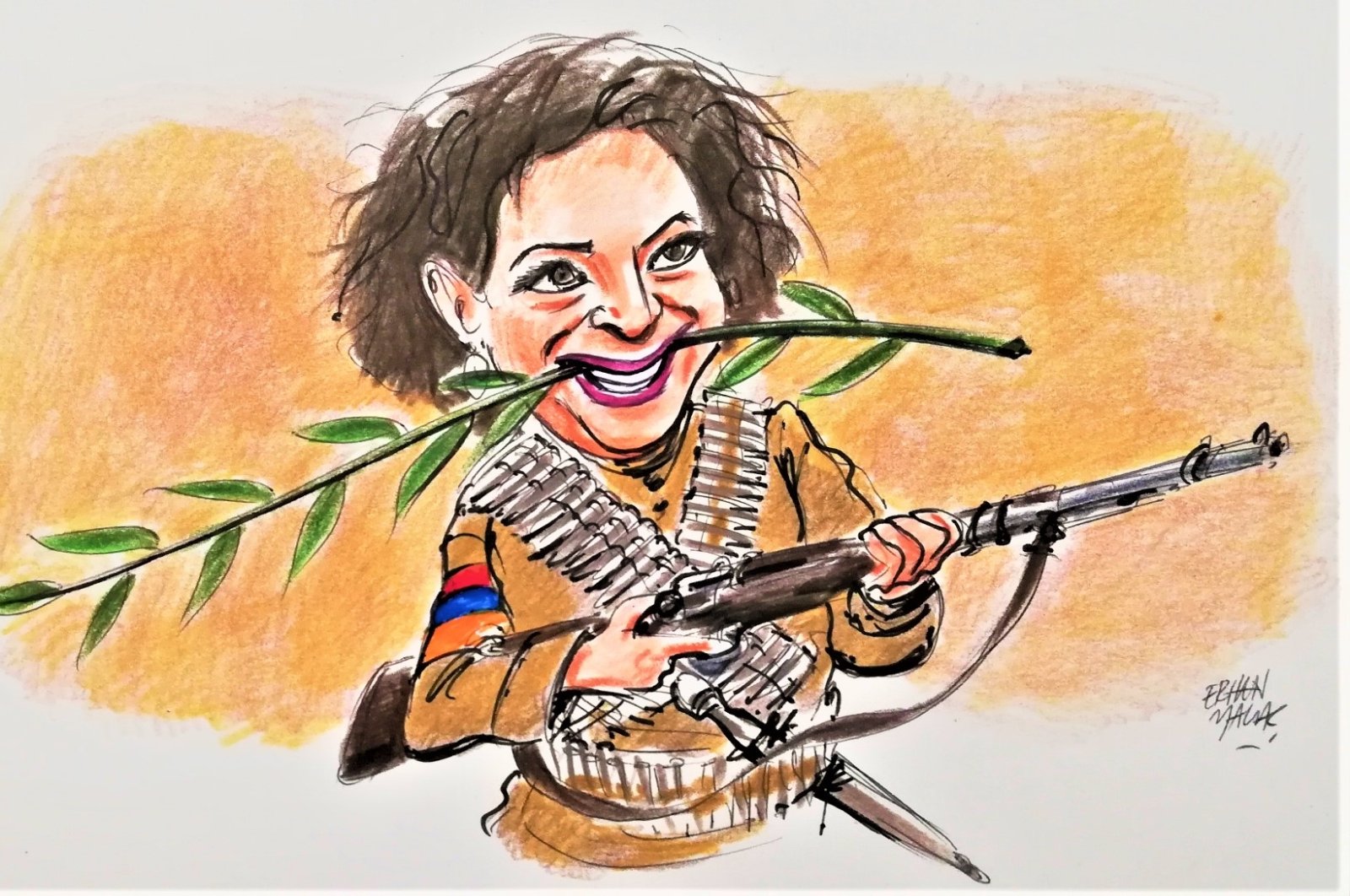 The wife of Armenian Prime Minister Nikol Pashinian, Anna Hakobyan, recently posed with a Kalashnikov automatic rifle in her hands during a military drill with the Armenian army in occupied Nagorno-Karabakh at a time when tensions and conflicts are increasing.

Hakobyan, who in 2018 allegedly acted as a peace envoy with her call to Azerbaijani women for the “Women for Peace” campaign, showed how much she really supports peace with photos of a gun in her hands two years later.

The escalating tension on the Azerbaijan-Armenia border in July once again turned the eyes of the world to the region. The two countries were at the brink of war when Armenia attacked Azerbaijan’s Tovuz region.

Twenty soldiers from both sides lost their lives in mutual artillery fire in Tovuz.

The Armenian army violated a cease-fire on July 12 and attacked Azerbaijani border positions in the northwestern Tovuz district with artillery fire, later withdrawing after suffering heavy losses following retaliation from the Azerbaijani army.

While these conflicts continued, the 42-year-old first lady on Aug. 25 appeared at a drill of the Armenian army in the region. In these photos, which caught the attention of the Armenian press, Hakobyan posed with a gun in her hands, taking aim with 10-15 female Armenian soldiers in military uniforms.

Footage showing Hakobyan at the front while turning her barrel toward Azerbaijan, despite demanding Azerbaijani women make efforts for peace two years ago, has caused astonishment.

The stance of Hakobyan, who already stoked the existing conflict simply by visiting Armenian-occupied Nagorno-Karabakh, is clearly far from giving a message of peace.

What is more surprising is that Hakobyan participated in these military drills within the scope of her Women for Peace campaign.

As a first in the world, Armenia’s first lady delivers her “peace” campaign with women in military uniforms.

The woman in military uniform said on Facebook on July 13 that the Women For Peace campaign aimed at "uniting women against war, creating a favorable environment for the leaders of the conflicting countries to seek solutions to the conflicts at the negotiating table." Participation in military training also followed recent remarks by Hakobyan that "war must always be avoided, there is always an alternative."

Hakobyan’s poses in military attire with Armenian soldiers, while saying these words on one hand and demanding Azerbaijani women and mothers to take initiatives for peace on the other, are virtually like saying, “fight for peace.”

On the other side, Azerbaijan preserves its moderate stance toward these messages. Vice President and spouse of Azerbaijan’s President Ilham Aliyev, Mehriban Aliyeva, told Azerbaijan’s state news agency: “In everyday activities, one should not forget about philanthropy, mercy, mutual respect and kindness. On the contrary, guided precisely by these spiritual values, one can achieve the highest victories and rise to the highest peaks.”

Actively promoting Azerbaijan in the international arena and enriching politics, Aliyeva serves the progress of the Azerbaijani motherland, strives to develop culture, education, health care and sports in her country, and cares about its future.

Aliyeva in 2004 was chosen as UNESCO Goodwill Ambassador and in 2006 as the Islamic World Educational, Scientific, and Cultural Organization (ICESCO) Goodwill Ambassador, which was hailed as a historic achievement opening new horizons for the promotion of Azerbaijan’s rich cultural heritage to the world in Azerbaijani media.

In implementing significant projects within the scope of UNESCO, Aliyeva also keen to promote universal values such as peace, stability, the dialogue of civilizations, multiculturalism in the civilized world and consolidation of efforts in these areas.

Aliyeva has been awarded prizes related to the work she has conducted as UNESCO and ICESCO goodwill ambassador as well as many other international prizes for her contributions to the promotion of culture and international cultural exchange, preservation of global cultural heritage and because of her commitment to the principles of social justice and humanism.

However, the fact that Aliyeva did not choose this must be a strong test of patience that should be appreciated not only for the Azerbaijani people but for the whole world, in the name of peace.