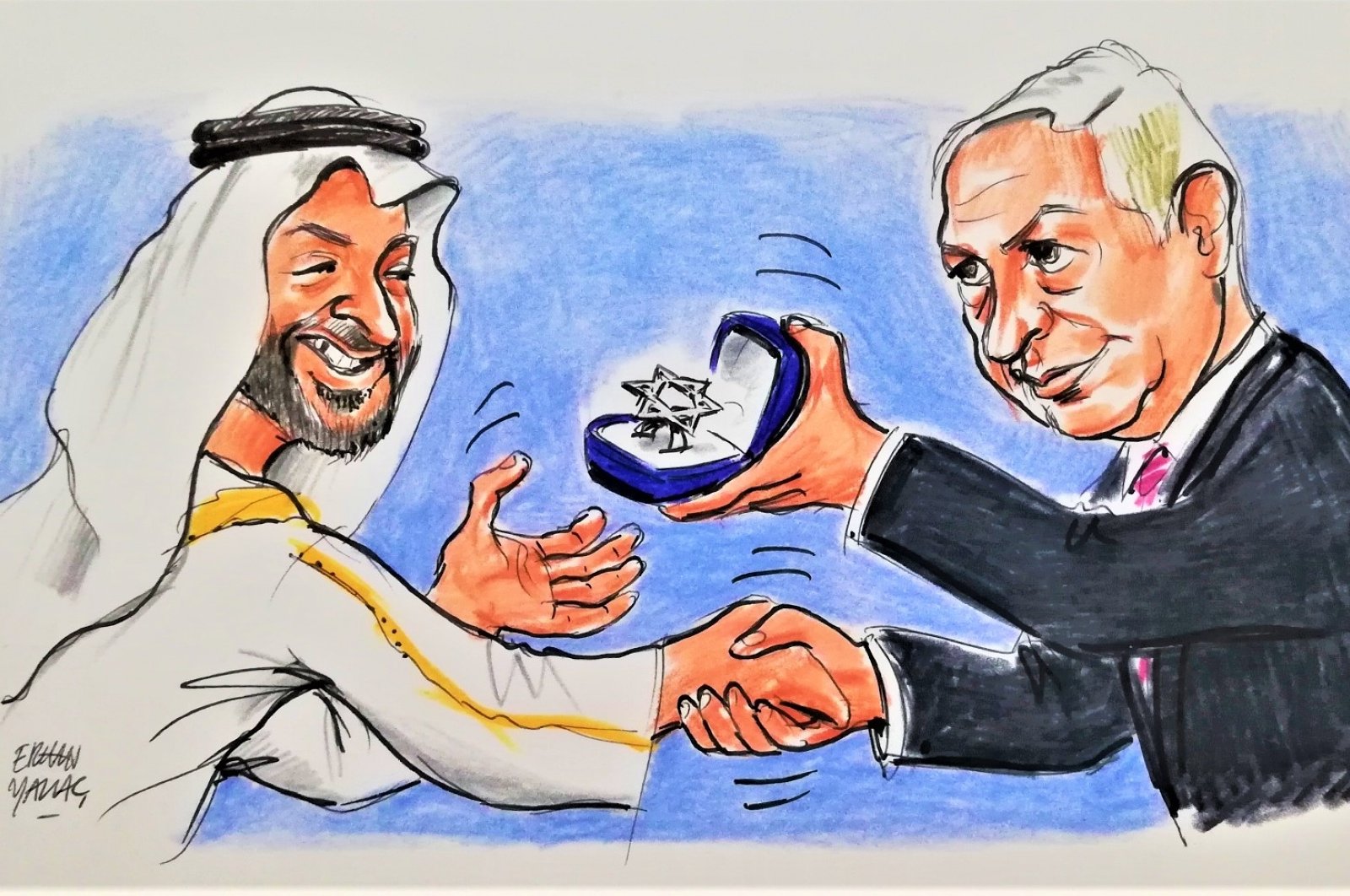 On Aug. 13, in the Oval Office, U.S. President Donald Trump announced a “peace agreement” between the United Arab Emirates (UAE) and Israel to commence "full normalization of relations."

Dubbed the Abraham Accords after the father of the monotheistic religions founded in the Middle East – Judaism, Christianity and Islam – the deal makes the UAE the third Arab country to formally recognize Israel. Egypt signed the Camp David Accords in 1979 in return for the Sinai, while Jordan penned its deal in 1994 at the height of the Oslo Accords. It is notable here that the UAE has signed its agreement with Israel while there are no ongoing peace negotiations.

The UAE claims that the deal is in return for Israel agreeing to “suspend” plans to annex large areas of the occupied West Bank as had been initially planned for this summer, though Israeli Prime Minister Benjamin Netanyahu said he was still committed to annexation in the future.

Trump administration officials refused to clarify how long Israel will suspend the annexation of Palestinian land in the West Bank as a result of this deal or under what circumstances the U.S. would support Netanyahu returning to his plans.

“Somewhere between a long time and a short time. That's what temporary means,” said Jared Kushner, the White House senior adviser in charge of the Israeli-Palestinian peace process.

Israeli and Emirati teams will be meeting soon to negotiate the details of the agreement on a host of issues including security, economic investment, reciprocal embassies, direct flights between Abu Dhabi and Tel Aviv and joint work on a coronavirus vaccine. Israeli media reported that a full signing ceremony would likely take place in Washington, D.C. before November’s presidential election in the U.S.

Netanyahu, speaking at a prime-time news conference, termed it a “historic evening” that “opened a new era in Israel’s relations with the Arab world.” Comparing the UAE favorably to Israel, Netanyahu described both states as growing world powers that had “turned the desert into blooming lands.”

In a paradigm shift from the old “land for peace” formula that has dictated decades of Middle East peace efforts, Netanyahu described the new deal as “peace for peace, and peace via strength. Here too we made a breakthrough.”

Stunningly, Abu Dhabi’s groundbreaking decision to fully normalize relations with Jerusalem did not require any tangible concessions of Israel. The UAE’s price for providing Israel with this recognition – and providing its embattled leader, Netanyahu, with a political victory – was markedly cheap. He did not agree to withdraw from 1 square centimeter of West Bank territory, did not evacuate a single settler, didn’t even have to pay lip service to the idea of Palestinian statehood or pledge allegiance to the two-state solution.

Above all, there was no mention of occupied east Jerusalem, the most important issue for both the Palestinians and the Muslim world as a whole.

To clinch the deal, all Netanyahu had to do to was agree to hold off, merely wait, on unilaterally annexing parts of the occupied West Bank, not to abandon the plan altogether.

For his part, Crown Prince of Abu Dhabi Mohammed bin Zayed al-Nahyan (MBZ) tweeted: “An agreement was reached to stop further Israeli annexation of Palestinian territories. The UAE and Israel also agreed to cooperation and setting a road map towards establishing a bilateral relationship.”

The Emirati leader portrayed the agreement as a case of the UAE stopping the annexation and thus single-handedly solving the current Israeli-Palestinian crisis.

On the other hand, Netanyahu in his news conference said that there had been no shift in his plans, but that it was Trump who had requested a “temporary halt” to annexation. The Israeli prime minister added that he was still fully committed to moving ahead with the takeover, but that it had to be done “in full coordination with the U.S. administration.”

A senior Tel Aviv official said applying Israeli sovereignty to areas of the West Bank was still on the agenda, adding, "The Trump administration asked us to temporarily suspend the (sovereignty) announcement so that the historic peace agreement with the UAE can be implemented."

“As a result of this diplomatic breakthrough and at the request of President Trump with the support of the United Arab Emirates, Israel will suspend declaring sovereignty over areas outlined in the President’s Vision for Peace and focus its efforts now on expanding ties with other countries in the Arab and Muslim world,” the White House said in a statement, which the administration described as a joint declaration of Israel, the UAE and the U.S.

For years, the UAE and Israel have had under-the-table contacts, which can now be openly conducted.

The Emirati ambassador to Washington, Yousef al-Otaiba, had earlier this summer taken the unprecedented step of publishing a front-page op-ed in a mass-circulation Israeli daily, in Hebrew, hinting at the quid pro quo announcement.

“We have conducted quiet diplomacy and sent very public signals to help shift the dynamics and promote the possible,” Otaiba wrote. Yet an Israeli annexation, he added, “will certainly and immediately upend Israeli aspirations for improved security, economic and cultural ties with the Arab world and with UAE.”

Earlier this month, Simon Henderson said in the American news website The Hill that in 2008, after a trip to Abu Dhabi, he ran into an Israeli diplomatic acquaintance who puzzled him when he said he too had been there – using his own name and passport. He explained that under pressure from Washington, U.S. allies in the Gulf had been urged to at least exchange perspectives with their Tel Aviv counterparts so the two sides would better understand each other.

The Israeli told Henderson that there was very little shared understanding in the meetings at that time, but that they might lead to something. Then in 2015, Tel Aviv established its first diplomatic mission in the UAE in order to represent itself at the International Renewable Energy Agency (IRENA), which is based in Abu Dhabi. There also has been an official, but unidentified, Israeli diplomatic mission in the Gulf since at least 2012, the existence of which was revealed in a carelessly edited version of the 2013 Israeli budget.

The UAE participated in Iniohos 2017, a joint military exercise with the air forces of Greece, Italy, the U.S. and Israel, and it was not the first time that Emirati pilots have flown alongside Israelis. In 2016, the UAE also participated in the Exercise Red Flag in Nevada.

Furthermore, trade between the two countries is an open secret. According to a 2012 report, the UAE’s Critical National Infrastructure Authority has made business deals with several Israeli firms. This includes an $800 million contract with AGT International, a Swiss-based company owned by Israeli businessman Mati Kochavi. The deal provided Abu Dhabi with “Falcon Eye,” a comprehensive surveillance and security system to protect the UAE’s “strategic infrastructure and oil fields.”

In an analysis of publicly available flight data, London-based online news outlet Middle East Eye revealed that a private jet secretly flies between Tel Aviv and Abu Dhabi, with a brief stop in Amman. The company that operates the jet, PrivatAir, is based in Switzerland’s Geneva, so it is possible that Kochavi is the secret Israeli guest of the UAE.

For years, Abu Dhabi has engaged with Tel Aviv quietly and secretly, with intermediaries and indirect transactions serving as cornerstones of the relationship. This gave the government a degree of plausible deniability to avoid facing criticism from Emirati citizens who are supportive of the Palestinian cause.

At the same time, the UAE was subtly signaling to its people and to the region that the normalization of relations with Israel was coming and had already started.

The fact that the Emirati flag appeared on the Iniohos 2017 insignia along with the Israeli flag suggested that the UAE was not too concerned about the backlash of public opinion.

In addition, a Palestine Liberation Organization (PLO) official, Hanan Ashrawi, wrote on Twitter that “the UAE has come out in the open on its secret dealings/normalization with Israel. Please don’t do us a favor. We are nobody’s fig leaf!”

For decades, the one thing Palestinians felt they had in their corner as they battled for international recognition was the support of a unified Arab world. Many Palestinians now fear that this disappeared, alongside their dreams of having a state of their own.

Since the beginning of Israel’s founding in Palestine, which is part of the larger Muslim world, almost all of the 22 Arab states have been in conflict with the presence of the Zionists in the Middle East.

That unified stance has changed in recent years, however, with the UAE, Saudi Arabia, Bahrain and Oman abandoning their longstanding position on the Israeli-Palestinian conflict in pursuit of winning favors from Trump, a strong supporter of Israel. These Gulf states have been trying for the past few years to complicate the situation by recognizing Tel Aviv and indirectly advocating for the creation of a pro-Zionist Arab bloc, striking a major blow to Palestinian aspirations.

As for Israel, which has won many battles against several Arab states since 1948, the latest submission coming from the UAE means that they do not need a peace process to clarify the status of the Palestinians, provide statehood or, in the face of the Abu Dhabi's top diplomat’s submissive remarks, freely act against the Palestinians.

Israel’s recent controversial nation-state law has already revealed Netanyahu’s racist dream, asserting that in the holy land only Jewish people have an exclusive right to self-determination.

In what was called the "Deal of the Century," the Trump administration signaled that the Palestinian presence will decrease as Israeli occupation gains more approval from Washington.

On Aug. 13, Palestinians vented their anger at Trump’s declaration of the agreement, which aims to resolve the conflict almost completely on Tel Aviv’s terms. The unconditioned and so-called “peace for peace” deal opens the way for Israel to retain nearly all of Jerusalem as its capital – dismissing Palestinian claims to the eastern half of the city – and allows Tel Aviv to annex much of the territory that it captured in the 1967 Six-Day War.

Until the deal’s announcement, the 2002 Arab Peace Initiative was the Muslim world’s ultimate frame of reference for the Israeli-Palestinian conflict. If Tel Aviv was interested in full diplomatic relations with an Islamic nation, the proposal said, it must first agree to a “full Israeli withdrawal from all the Arab territories occupied since June 1967,” the establishment of a Palestinian state with east Jerusalem as its capital and a “just” and “agreed upon” solution to the Palestinian refugee question.

Israel did none of the above but it still gets to open an embassy in Abu Dhabi, with perhaps other capitals in the region following soon as well.

The normalization of relations with Israel was one of the few remaining bargaining chips the Arabs had, and the UAE just squandered them for literally nothing. No matter who signs with Tel Aviv, however, Palestinians remain firm about their land and having Jerusalem as their future capital, a stance backed by most Arab citizens, who side with their just cause.