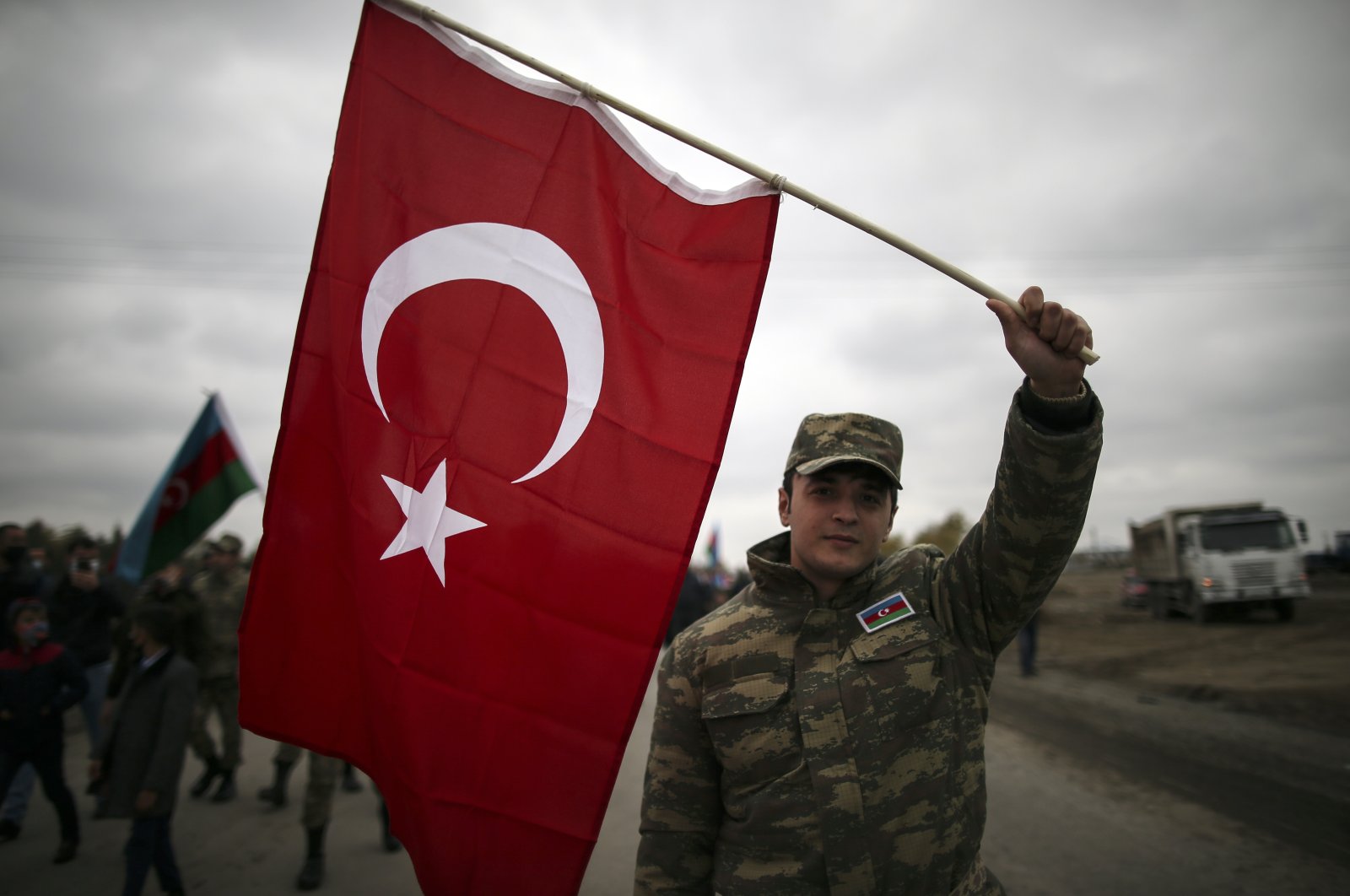 An Azerbaijani soldier holds a Turkish national flag as he celebrates the transfer of the Lachin region to Azerbaijan's control, in Aghjabadi, Azerbaijan, Dec. 1, 2020. (AP Photo)
by Emrah Atar Dec 08, 2020 12:05 am
RECOMMENDED

The balance of the world is changing rapidly, and the ability of medium-sized or developing countries such as Turkey to keep up with this change is becoming more critical every day. First, we should note that the orientation that we have observed in recent years is gradually strengthening. We are going through a period when the share of military tools and methods in the running of foreign policy is gradually expanding.

Additionally, in this process, where nationalism and populism are strengthened, economic struggles grow quickly and globalization loses ground. This strengthens introverted and anti-alien tendencies.

In today’s international system, which leads states to doubt each other, wars between great powers have already settled into focus, perhaps not direct wars through military means but through technology, culture, information and trade.

Admittedly, if crises and wars surround you on all sides, and you also face essential challenges in terms of your fundamental rights and interests, you cannot have the luxury of accepting and tolerating what is happening with a naive approach.

The fact that Turkey acts with increasing self-confidence and independence in its relations with the world is a situation that every citizen of the Republic of Turkey will welcome with applause. However, when we look at the overall picture, it would be to go beyond the boundaries of reality to say that everything is working within an ideal framework in Turkey’s foreign policy. As in 2019, 2020 has been very challenging for Turkey. From the point of view of Turkish foreign policy, it seems that there will be many issues that will be inherited by 2021 from 2020. Along with the pandemic and natural disasters such as the earthquakes in eastern Elazığ province and western İzmir province and the avalanche disaster in eastern Van province, Turkey continued where it left off without taking a step back in its foreign policy.

The current situation of Turkish foreign policy is one of the most challenging, serious and problematic periods not only in recent years but also probably the entire Republican period in general. At this point, we can address some of the issues that remain in our minds in 2020.

The Eastern Mediterranean tension and rivalry are the main issues. Turkey has taken necessary and significant steps in 2020 to address this issue, which involves global actors along regional ones, especially Greece, the Greek Cypriot administration and France.

The drilling ships such as Yavuz and Fatih that enable Turkey to conduct drilling activities on its continental shelf began to operate.

In the meantime, the agreement signed with Libya to limit maritime jurisdiction prevented our country from being squeezed into a narrow area along its coast in the Eastern Mediterranean. Turkey has increased drilling in the Eastern Mediterranean and the Black Sea with its domestic ships in the last two years. President Recep Tayyip Erdoğan also announced that Turkey had made the most extensive natural gas discovery in its history in the Black Sea.

Although the amount discovered will increase further in the days ahead, there is also talk of important news in the Eastern Mediterranean on the horizon.

The tension on the morning of Sept. 27 between Azerbaijan and Armenia over occupied Nagorno-Karabakh soon turned into a conflict. After a long struggle, Armenian President Nikol Pashinian announced that they had suffered a bitter defeat.

The biggest supporter of Baku’s insistence on reclaiming its occupied territories was undoubtedly the Turkish government and its citizens. The Financial Times, one of the world’s leading newspapers, wrote a comprehensive analysis of the influence of Turkey by stating that drones and missiles worked for Azerbaijan against Armenia and announced to the world that Azerbaijan has a bigger advantage with the support of Turkey, both diplomatically and militarily.

The new president of the Turkish Republic of Northern Cyprus (TRNC) was announced after two rounds of elections. Former TRNC President Mustafa Akıncı entered the election as the favorite but lost to former Prime Minister Ersin Tatar, the candidate supported by Ankara. Although the election has been widely discussed, one of the most talked-about issues has been the issue of the closed town of Maraş (Varosha). In northern Cyprus, a part of Maraş, which had been closed for settlement since 1974, was opened for public use. This situation has especially disturbed the Greek side, or the circles close to the Greek Cypriot administration. Nevertheless, neither the TRNC nor the Turkish government retreated from this step, and Erdoğan and Nationalist Movement Party (MHP) Chair Devlet Bahçeli even visited this area after the elections.

The coronavirus outbreak, which first appeared in December 2019, soon became the No. 1 agenda item of global public opinion. The outbreak was declared a global pandemic by the World Health Organization (WHO). Due to the pandemic, many countries including Turkey implemented strict security measures. Economic activity slowed or even halted under the restrictions, while international borders were closed for a while around the world. Millions of people have closed their homes because of curfew restrictions and quarantine practices. In this process, Turkey, which has been one of the significant examples for many countries with its health infrastructure, also received public appreciation for its humanitarian assistance throughout the world.

In early February 2020, 33 Turkish soldiers were killed in an airstrike by the Russian-backed Damascus regime in Idlib, Syria. After the attack, NATO convened an extraordinary meeting at Turkey’s request, but no results were achieved. Turkey has increased its effectiveness in the region and has tried to respond to the attack both on the front and diplomatically. It opened its European doors to migrants, especially unsettling the European Union and Greece. As Greece resorted to measures to block the entry of migrants into the country, tense relations between Turkey and Greece were further strained. Thousands of migrants flocked to the borders, and Greek forces’ inhumane responses cost some migrants their lives.

However, if you name the biggest problem Turkey faced in its 2020 foreign policy, there will surely be only one answer. Whenever Turkey takes any responsibility in the international arena, France is the first country to try to block it. As Turkey shifted the balance in Libya, France became the most important supporter of Libya’s putschist Gen. Khalifa Haftar. France was again the first country that sent its support to Armenia against Azerbaijan and accepted the declaration of independence for Nagorno-Karabakh in its Senate. French President Emmanuel Macron openly criticized Turkey’s gas exploration efforts and TRNC policy and openly supported Greece’s standard policies with the Greek Cypriot administration.

Turkey’s regional achievements in Libya, the Eastern Mediterranean, the TRNC and recently Nagorno-Karabakh can be seen as a defeat for France in terms of two aspects.

First, Turkey is becoming a serious obstacle and competitor in France’s policies in the Middle East, Mediterranean and Africa. Secondly, this can be considered a military, diplomatic, commercial and strategic defeat from the point of view of France.

Meanwhile, on the diplomatic front, a Turkish ambassador assumed the presidency of the 75th General Assembly of the United Nations (UNGA) in the period of 2020-2021. The election of Volkan Bozkır, the former EU minister and the chairperson of the Parliamentary Foreign Affairs Commission in Ankara, will play a valuable role in determining the issues to be discussed at the UNGA, focused on Turkey. Turning this situation into an opportunity may be the first step that Turkey will take in the coming years. The outcome of this development will soon be apparent.

In the light of all these events, Turkey needs to repair some relations by taking more firm steps, increase its number of friends and conduct its relations with the outside world in diversity and balance by pursuing policies aimed at both the West and the East. The noble questions that need to be asked here are who pushes the issues to military methods, whether military methods are really needed, to what extent space is opened for diplomacy and to what extent a correct route is drawn that will provide diplomatic solutions to foreign policy. Turkey has had to face severe problems and has taken foreign policy steps that prioritize its own interests in the face of difficult actors such as the U.S. and Russia.

It also proved that it is an independent country and that it can stand up and move forward in the face of pressure, as in the cases of Syria and the Eastern Mediterranean. After the coronavirus pandemic, new areas of opportunities have been opened up in Turkish foreign policy. In addition to its growing number of embassies, Turkey has already increased its capacity to operate abroad in recent years with institutions such as the Yunus Emre Institute (YEE), the Turkish Cooperation and Coordination Agency (TİKA), the Presidency for Turks Abroad and Related Communities (YTB) and the Maarif Foundation of Turkey. Now Turkey needs to recognize this crisis as an opportunity and shape these institutions in a more coordinated way according to the new global realities.

*Ph.D., teaching assistant at the Global Development Institute (GDI) at the University of Manchester