Armenia is simply wrong: This is what law and history say 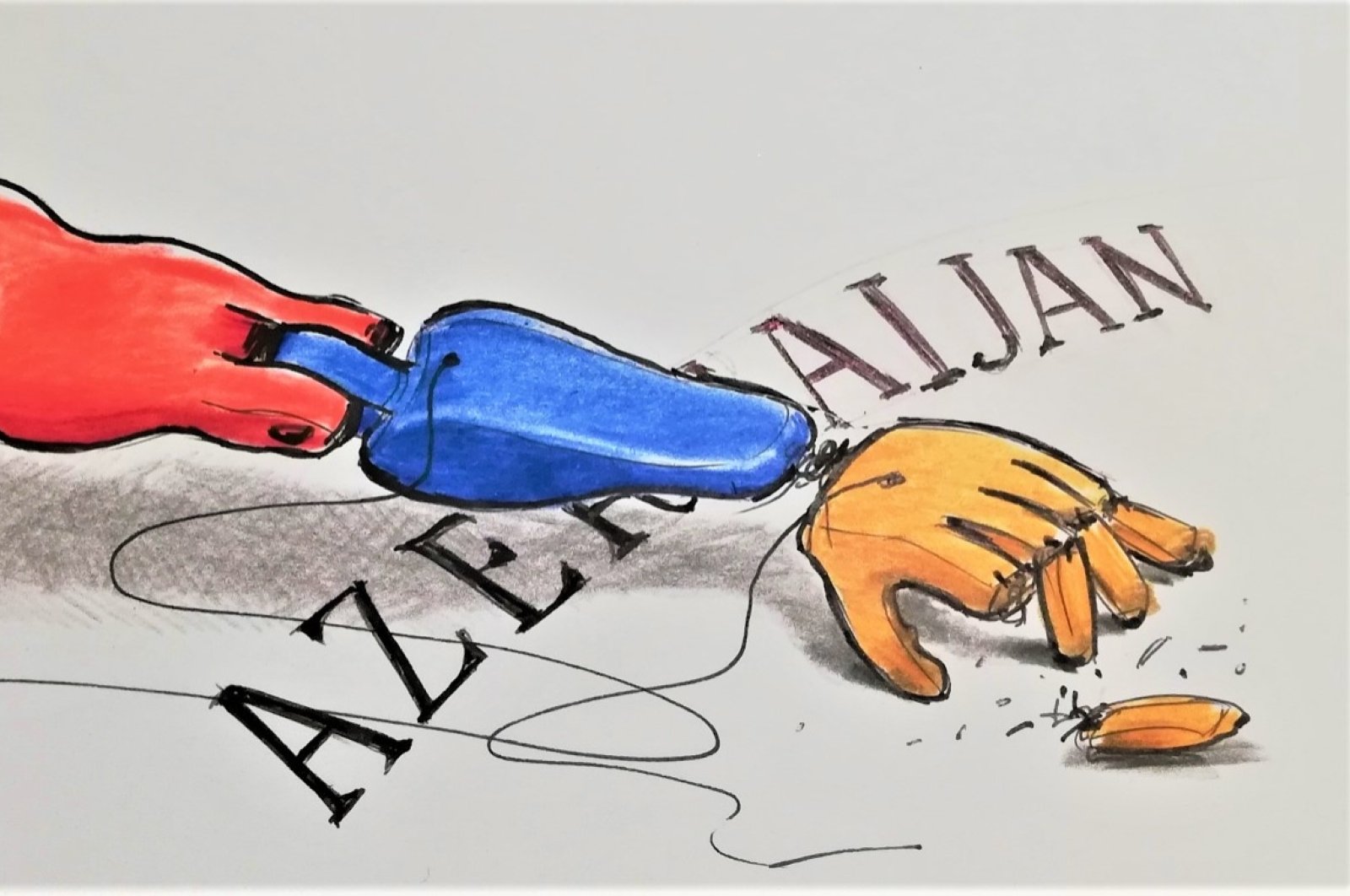 While the Ottoman Empire, which was in the Central Powers that lost World War I, withdrew from Baku, the British armies entered the city in November 1918. The then-British Army Commander-in-Chief General Thomson, the representative of the Allied powers, stated that the mountainous parts of Nagorno-Karabakh should be left to Azerbaijan after a series of negotiations with the Azerbaijani government.

Founded by the Azerbaijan Democratic Republic in January 1919 and consisting of the uyezds (administrative-regional units of Tsarist Russia) of Shusha, Javanshir, Jabrayil and Zangezur, the provisional Nagorno-Karabakh governorate was recognized by the Allied powers, represented by Gen. Thomson, in April 1919.

Khosrov bey Sultanov was appointed Gubernator (Governor) of Nagorno-Karabakh in January 1919 and took office in February 1919. Armenians living in the region declared their recognition of the Azerbaijani government after the seventh congress of the Armenians of Nagorno-Karabakh, held on Aug. 26, 1919.

After this process, the congress of the executive delegates of the people of NKAO announced that they refused to recognize the autonomy of the Azerbaijani SSR with the initiatives of the Armenian SSR, and then declared an "Independent Union Territory" where the constitution of the Azerbaijan SSR was deemed void. There were many unconstitutional decisions issued at that time by the supreme legislative body of the Armenian SSR, but the most important of them is the decision regarding the unification of the Armenian SSR with the Nagorno-Karabakh on Dec. 1, 1989. The fact that Armenia mentions six provinces in the east of Turkey as “Western Armenia” in the Declaration of Independence in its current constitution is proof that an irredentist understanding still persists.

In all the decisions made by the authorized institutions of the USSR (especially the decisions dated Jan. 10, 1990 and March 3, 1990), it was clearly stated that the border between the Azerbaijani SSR and the Armenian SSR could not be changed in any way. After the dissolution of the USSR and the independence of Azerbaijani and Armenian SSRs, the problem is now the subject of international law and international institutions.

The region covered by the NKAO remained a part of Azerbaijan until Nov. 26, 1991, when Azerbaijan declared its full independence. After the dissolution of the USSR, in accordance with the principle of “uti possidetis juris” (respect for territorial integrity) of international law, with the declaration of independence of the Republic of Azerbaijan and its recognition in the international arena, Nagorno-Karabakh and its surrounding regions were accepted within the borders of the Azerbaijan Republic.

The question in the U.N.

After the Republic of Azerbaijan gained its independence, it was admitted as a member of the United Nations on March 2, 1992. The U.N. treaty defines one of the main tasks of the U.N. in Clause 1 of Article 1 as follows: “To protect international peace and security, and for this purpose, to prevent and void the threats to peace, to take effective joint measures to suppress acts of aggression or other disturbance of peace, and to correct or settle international conflicts or situations that may lead to the breakdown of peace through peaceful means, and in accordance with justice and the principles of international law.”

The U.N. Security Council (UNSC) can investigate problems only in the following cases: When the problematic states themselves or other states apply for the solution for the problem, when the General Assembly recommends an investigation, when the council itself decides and when the U.N. secretary-general applies for one.

The UNSC may request the parties to resolve the issue peacefully (Article 33). Apart from this, the council has the right to conduct research independently on issues that threaten international peace and security (Article 34).

If the parties can solve this problem themselves after the problem is submitted to the UNSC for resolution, the council closes the relevant file. According to Article 39 of the U.N. Constitution, the UNSC determines whether peace is threatened, broken or there is an act of aggression and makes recommendations for the protection or reestablishment of international peace and security or decides what measures will be taken in accordance with Articles 41 and 42.

The UNSC may advise the states that are parties to the conflict that may jeopardize international peace, but if the states apply to the U.N. for the resolution of the problem, the necessary measures can be implemented.

If the parties cannot solve their own problems despite the recommendations of the UNSC and if this poses a danger to international peace and security, compulsory measures can also be taken.

In accordance with the U.N. Charter, the UNSC has ample facilities to resolve problems peacefully. In this context, taking into account that Armenia openly continues its occupation of the Azerbaijani territories, Azerbaijan applied to the U.N. Secretary-General and the UNSC presidency, asking for help to stop Armenia’s overt encroachment of Azerbaijan, to prevent the explicit breach of international law and the relevant articles of the U.N. Constitution, and to resolve the problem peacefully.

Nagorno-Karabakh remains one of the important issues of the Caucasus and to some extent the world today. Attempts to resolve the issue continue within the framework of the Organization for Security and Co-operation in Europe's (OSCE) Minsk Group and in other platforms.

The roots of the crisis

Looking at the history of the problem, we can see that its roots are based on the policies of the great powers regarding the region and ethnic migrations in the region within this framework.

There were Armenian and Azerbaijani (also referred to as Azerbaijani Turks or Muslims) populations in the state structures that existed in the region in previous periods, but there were no ethnic wars. The agreements signed by Russia as a result of its wars with the Ottomans and Iran in the first half of the 19th century formed important stages in changing the ethnic structure of the region.

The Treaty of Turkmenchay of 1828, signed between Russia and Iran, stipulated the migration of hundreds of thousands of Armenians living in Iranian territory to the Nagorno-Karabakh region, which would come under Russia's control, and to present-day Armenia.

As part of the Treaty of Adrianople, signed between the Ottomans and Russians in 1829, about 84,000 Armenians were brought to the Nagorno-Karabakh region. According to a proposal by Russian historians, which is now considered the most reliable source on these periods, around a million Armenians were resettled in the territory of present-day Armenia and the Nagorno-Karabakh region by the mid-1800s.

After the creation of regions mostly populated by Armenians in the Caucasus, an Armenian state was established in the early 1900s as a second phase. The early 1990s were notable for two things in terms of this subject matter.

In this process, the massacre carried out by the Armenian forces in the Khojaly region of Azerbaijan on Feb. 25-26, 1992, with the support of the Russian military unit No. 366 in the region caused a strong reaction from many foreign states and international organizations, but no action was taken against those who committed this massacre.

As a result, until the end of 1993, Armenia continued to invade Azerbaijani territories, and the UNSC continued to take resolutions demanding an end to these occupations. Meanwhile, attempts to resolve the problem have continued at the level of various international organizations.

The OSCE Minsk Group was founded as the most authoritative body in this regard. As a result of the special initiatives of the Minsk Group and Russia, a series of agreements were signed between Azerbaijan and Armenia in May 1994, stipulating a cease-fire. From May 1994 to the present, this cease-fire has been maintained, although it has been violated occasionally.

Attempts to resolve the problem through the cease-fire have been carried out through various international organizations and various states, including the Minsk Group.

Among these efforts, the most important were the three peace plan proposals offered by the OSCE Minsk Group to the parties. Considering that the perspectives of the Azerbaijani and Armenian public on the problem are completely opposite today, the difficulty of finding a solution to the issue is understood better.

Among international organizations, the Organisation of Islamic Cooperation (OIC) is the only organization that unconditionally recognizes the Republic of Armenia as an aggressive state in all its decisions and upholds the territorial integrity of Azerbaijan in the same decisions.

However, since the OIC does not have any authority to implement these decisions, it could only provide political and financial support to Azerbaijan. Resolutions 822, 853, 874 and 884 adopted by the UNSC were resolutions that could be key to solving the problem.

Meanwhile, the OSCE, despite signing many solution plans to resolve the Nagorno-Karabakh conflict, failed; and although it previously did promising work, it came out with its failures and continues to fail. Two of the three decisions prepared by the OSCE Minsk Group and offered to the parties were not accepted by Armenia and only one was accepted by Azerbaijan.

Given everything done to prepare plans that were not accepted and to propose inconclusive opinions, it would mean desperately waiting for a failed result to rely on the OSCE for the solution of the problem. As mentioned in the introduction, the Nagorno-Karabakh conflict can only be resolved at the request of major states. International organizations are ineffective in the face of the policies of the great powers that are striving to have a say in the region.

Based on this new but limited approach of the U.N. treaty, the issues of self-determination and the end of colonialism have been constantly discussed in the bodies of the organization, as well as efforts made to clarify the provisions of the treaty.

The organization has taken both general decisions interpreting the provisions of the treaty and adopted an attitude and behavior that explicitly aimed at ending colonialism in the face of individual events.

The U.N. implementation was in line with the recognition of self-determination as a rule stipulating rights and liability. This principle was turned into a right with the uniform decisions made by the General Assembly after the decolonization movements of the U.N. since the late 1950s.

According to the U.N.’s Declaration on the Granting of Independence to Colonial Countries and Peoples, all the people have the right to self-determination and, thanks to this right, they freely determine their political status and freely try to achieve their own economic, social and cultural development. This article recognizes self-determination for all peoples.

Article 1 emphasizes that the subjection of peoples to foreign oppression, sovereignty and exploitation is against fundamental human rights, the U.N. treaty and international peace and cooperation, and it limits the subject of self-determination to the colonial peoples.

Article 6 of the declaration states that any attempt to partially or completely disrupt the national unity and integrity is against the U.N. treaty. In this framework, according to Article 2, the user of the right to self-determination, defined as the right for people to “freely determine their political status and freely achieve their own economic, social and cultural development,” is that of all the people of the colonial country, and the borders of the colonial country are the borders of the independent state founded.